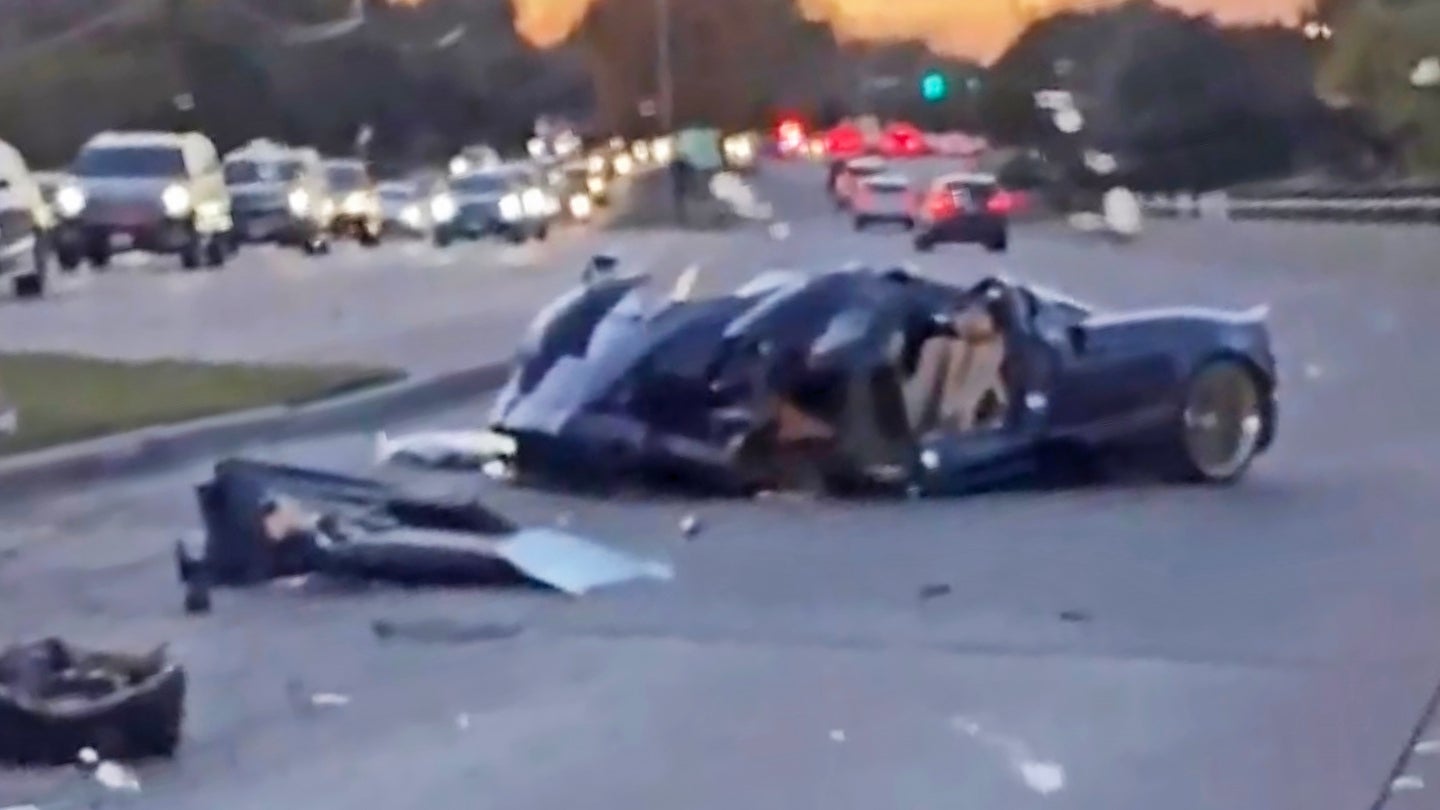 Hypercar crashes are always cringe-worthy not just because they involve the very possible risk of injury to the driver, occupant, and bystanders, but because more often than not, these are rolling pieces of art getting smashed. Sadly, that's exactly what we're seeing today out of Dallas, Texas, as a rather special Pagani Huayra Roadster was involved in what looks like a fairly heavy crash that deployed the car's airbags and ripped apart much of the car's bodywork.

On Tuesday evening, news that this one-off Huayra, now identified as chassis 76029, was involved in an accident began circulating on social media. Its once showroom-worthy condition now in shambles as its driver's door lay on the pavement, one or both of the front wheels completely removed from the chassis, and other carbon fiber bits shattered all over the road, as can be seen on this Instagram story.

Several posts on Facebook and Instagram have identified the car as one typically driven and shown off on social media by Gage Gillean, a 17-year-old YouTuber and the son Tim Gillean, a billionaire who founded a private equity firm in Dallas who owns a number of high-end cars.

This particular Roadster once held a $3.4-million sticker price when new, and that's not hard to imagine given the bespoke nature of Pagani's manufacturing process. Hell, even the purple-tinted exposed carbon fiber should be a nod to the potential cost of this hypercar. In fact, the family's entire stable is rather impressive. In addition to the Pagani, they also appear to own a McLaren Senna, Bugatti Chiron, Ferrari LaFerrari, Rolls-Royce Dawn, and a Lamborghini Urus.

It's unclear at this time if it was a single-vehicle accident or if another car was involved outside of the photos and video taken. Gillean has previously posted several other YouTube videos in the Huayra, many of which involved some excessive applications of the gas pedal, though it's not known if speed played a factor in the crash.

Fortunately, content creator Zackxak (who was reportedly also involved in the accident) confirmed via his Instagram story that both he and Gillean walked away without serious injury.

To make matters worse, despite being manufactured in 2018, this 754-horsepower hypercar was a relatively new acquisition to the household. Gillean's father posted a photo of the car to Instagram in mid-June labeled "new arrival," so it's fair to surmise that the hypercar only belonged to the family for around five months before it was crashed.

Pagani only makes 30 of its high-end hypercars per year, each of which can take up to 10 months to complete. Should Gillean decide to replace the crashed unit with a new one from Italy, he may have some time to wait.