Would You Let This West Hollywood Robot Park Your Car?

First automated municipal parking structure West of the Mississippi a sign of more to come. 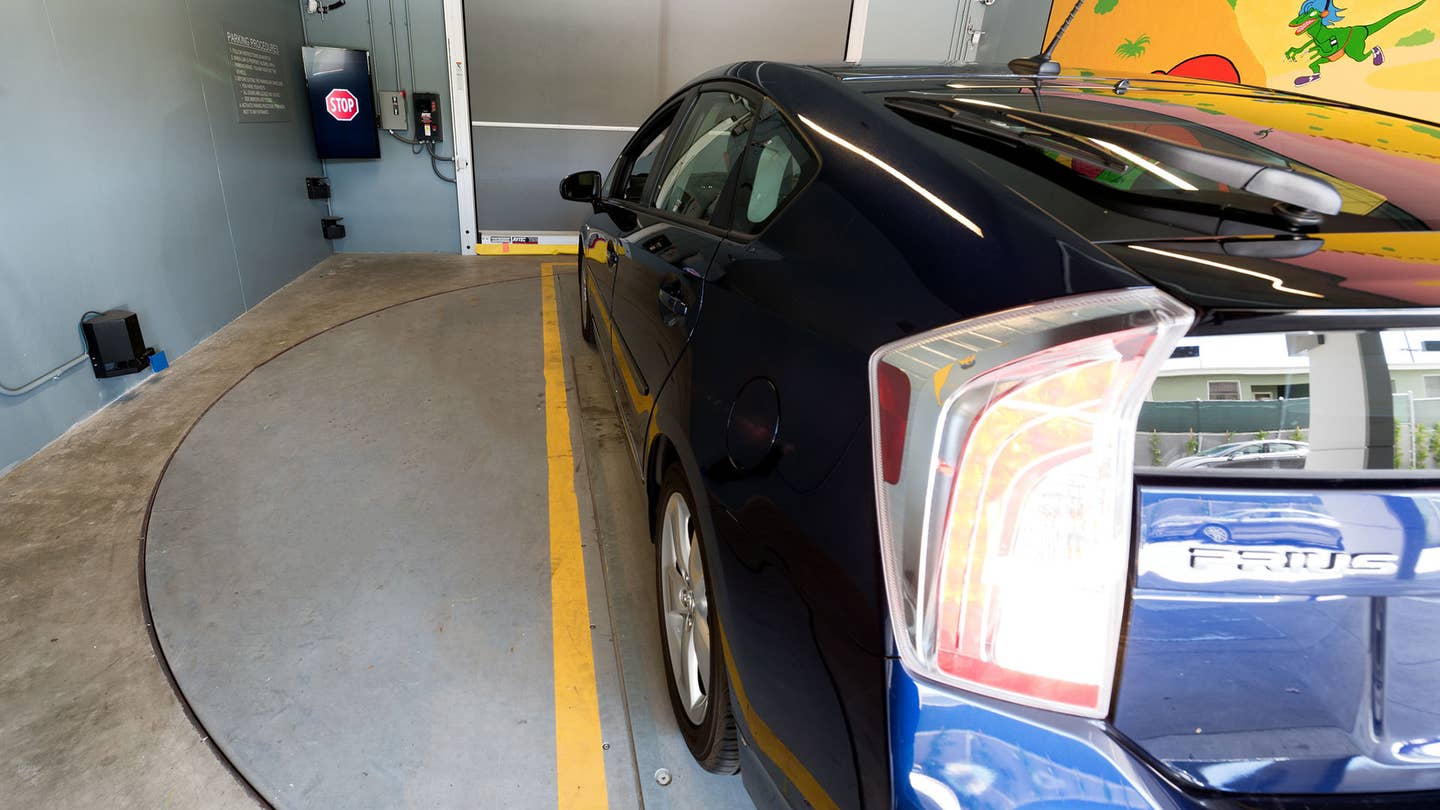 The city of West Hollywood has opened up the country’s first automated municipal parking garage west of the Mississippi. Achieving the west coast first took longer than planned, the city had to overcome some resident opposition, LA bureaucrats had to update city codes to allow for the technology, and the final product became a small part of a larger and more expensive infrastructure revamp. The benefits, however, should make the five-year ordeal worth it.

The city-owned automated vehicle storage and retrieval system (AVSRS) itself cost $2.6 million, which works out to $13,000 per spot. That sounds hefty, but the price-per-spot was $40,000 to $50,000 when the WeHo City Council first considered the idea in 2007. And the upside for “clean, green, parking machine” is big. The previous, three-story traditional garage behind WeHo’s City Hall had 68 spaces, not enough to accommodate all of the workers there. The new garage is still three stories tall – at 35 feet, it’s the same height as City Hall – but has five stories inside for parking and 200 spaces. The robogarage is 40-percent smaller than a traditional ramp garage with similar capacity, and its smaller footprint meant the city could build a 27-foot-wide community plaza and green space between the garage and City Hall. Eliminating the need for drivers to cruise around for spots means a CO2 emissions reduction equivalent to taking 92 cars off the road or planting 67,000 trees, and a solar array on the roof of the building can power the structure and part of City Hall. Planners expect either gold or platinum LEED certification.

The larger area built up around the parking structure – a façade, the parking bay motor court, and the community plaza – cost $13 million, paid for by a $20.5-million bond issue that included refurbishing a couple of other buildings in the area. The only other automated garages in LA – a 16-vehicle garage in Sherman Oaks, a 60-space garage in Chinatown, and another garage at UCLA – are all smaller and for private use.

During City Hall office hours 120 spaces are reserved for government workers, the rest are available to anyone and parking is free for those on City Hall business. At other times all the spaces are open to WeHo visitors, and local residents can use them for overnight parking “at competitive rates.”

Visitors pull their vehicles into one of four parking bays, each bay decorated with a hand-painted mural, turn their cars off, get out, and take a ticket. The parking machine takes care of the rest, conveyors, shuttles and elevators hauling the vehicle to an open spot. People on the street can watch vehicles in transit through four huge windows along one side of the garage. When it’s time to leave, the machine reads the visitor’s ticket and spits the appropriate car out, conveniently pointed out toward the street. Designed to deliver up to 125 cars per hour, the longest estimated wait time is five minutes. Plenty of backup systems have been built in to allay fears, and an attendant is on duty 24 hours a day. If the garage fulfills its intended purpose without eating or dropping the cars in its care, you can expect robot valets to start popping up all over the city before long.