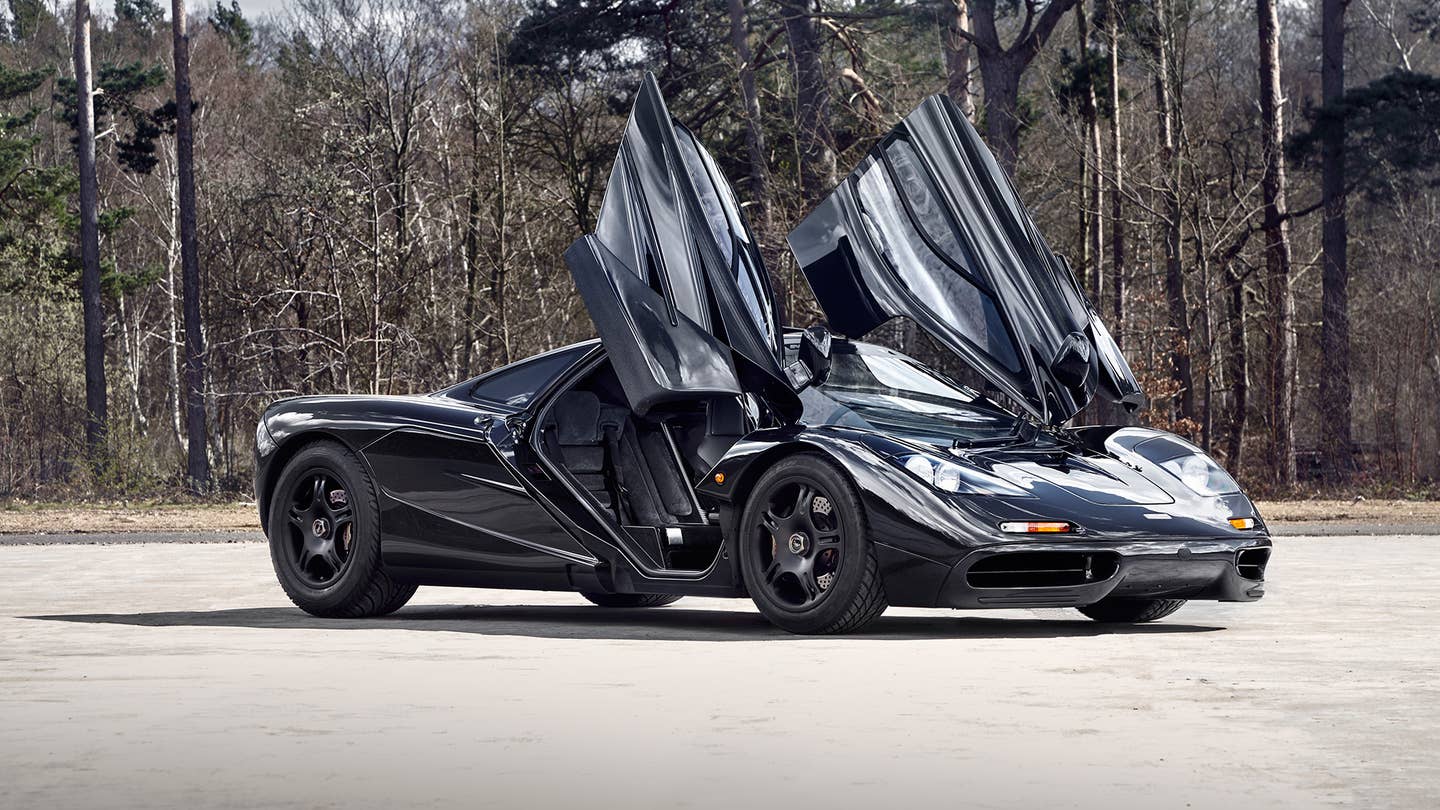 McLaren built a little more than 107 (or maybe 106) of its F1 supercar in several variants from 1993 to 1998. They come up for sale about once every presidential election cycle, and it has happened again: McLaren Special Operations is selling a 1998 F1 road car – one of 64 made – with less than 2,800 miles on the odometer. This is special, both the sale and the seller. Buying an F1 at auction would be like adopting a heavenly angel from an orphanage. Buying an F1 from the skunkworks division of the McLaren mothership is like having God himself say, “If you’re interested in one of my winged cherubs, I think I might have one here you might like. I’ll deliver him in an ark, if that’s acceptable to you.”

The consignment in question is the 60th F1 produced, and appears to have lived in the UK all its life. Originally painted Mercedes Brilliant Silver – Mercedes had been supplying engines to the McLaren F1 team for three years by this time – it's been re-hued in Carbon Black with a stealth finish on the 17-inch center-lock magnesium wheels. The centrally placed driver’s seat is wrapped in black leather with contrasting red, the two outboard seats are wrapped in black Alcantara. Whoever purchases this car will also receive the bonus goodies delivered with the F1 when new, like fitted luggage, the Facom titanium tool set coated in titanium nitride, the Tag Heuer 6000 watch, and the book Driving Ambition: the Official Inside Story of the McLaren F1. Want to know who else bought a silver McLaren F1 in 1998? Elon Musk. But this one isn’t his.

When the F1 was new it cost $815,000, a price so absurdly large at the time that it could have come from the tenth dimension. That, and annual running costs McLaren estimated at $30,000 per year, are part of what kept McLaren from building as many F1 road cars as the company would have liked. Yet it was an amazing vehicle, the first to employ a carbon fiber monococque chassis and still the record holder for the fastest naturally-aspirated road car: the 6.2-liter BMW V12 with 620 horsepower and 480 pound-feet of torque screamed its way to a 242.8-mph top speed.

Two decades later it turns out the F1 is an amazing investment vehicle, too, with recently auctioned examples changing hands in the double-digit millions. MSO doesn’t list a price – naturally, you will need to “inquire.” Or, more likely, you don’t. MSO says the F1 is in concours condition, which means that never has the phrase, “If you need to ask,” been more true.