Per a letter supposedly sent by a law firm representing Ferrari, Plein's behavior is "unlawful, unfair, and harmful" to the brand's image. 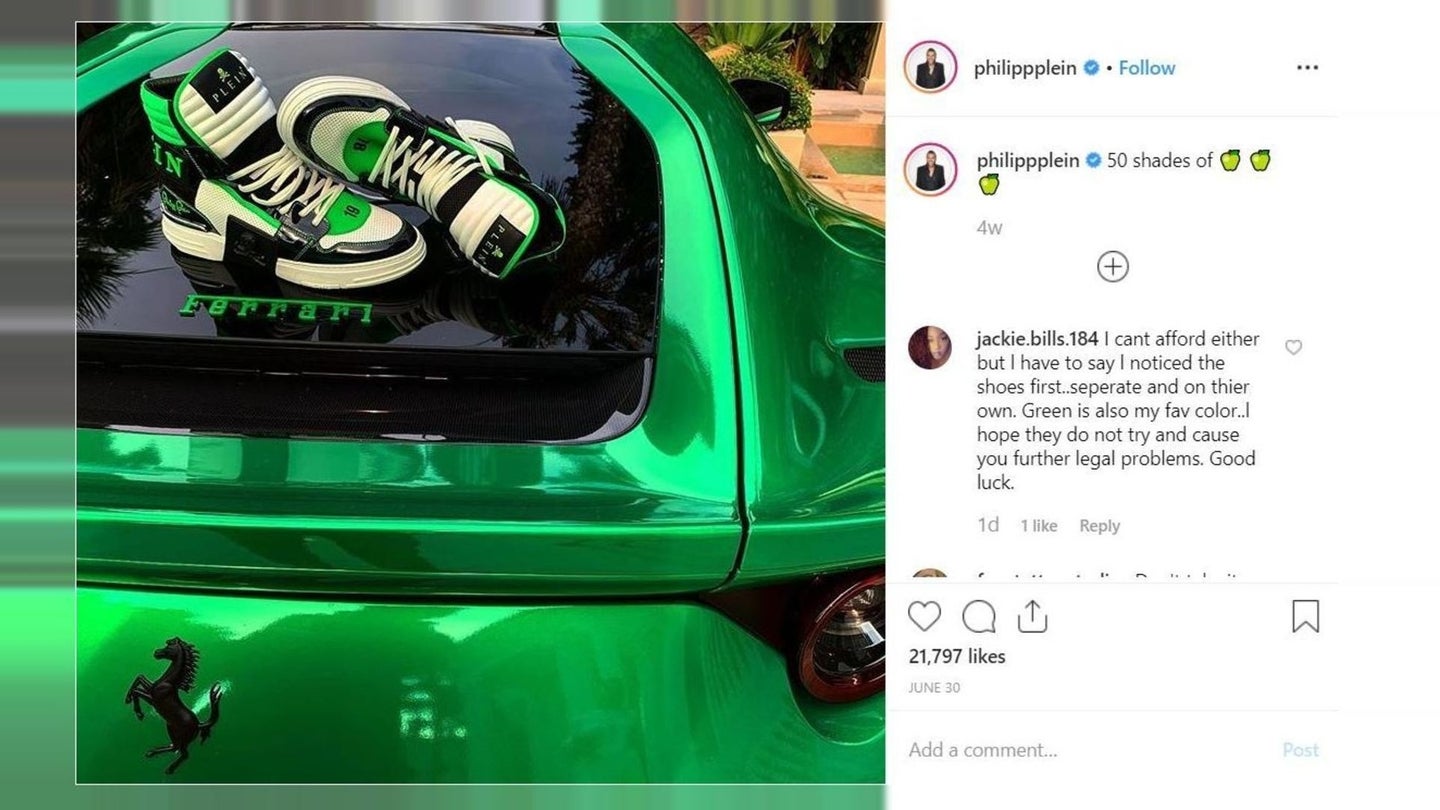 These days, it’s clear that money doesn’t always guarantee taste, so much in fact that Ferrari is reportedly taking matters into its own hands with a particularly, erm, expressive customer. An affluent German fashion designer is supposedly under fire from the Italian automaker after the company disagreed with the designer’s sense of style as portrayed on his social media accounts, particularly Instagram.

Philipp Plein posted a photo of a “love letter” sent by associates at Orsingher Ortu, an Italian-based law firm allegedly representing Ferrari, asking him to remove certain photos of him, his belongings, and his outrageously green 812 Superfast from his personal Instagram account within a timeframe of 48 hours. The reason? Apparently, Ferrari disagrees with the appearance of his lifestyle and his odd taste for fashion.

“Ferrari’s trademarks and model cars are associated in your pictures with a lifestyle totally inconsistent with Ferrari’s brand perception, in connection with performers making sexual innuendos and using Ferrari’s cars as props in a manner which is per se distasteful,” reads a letter allegedly sent by the firm. “The behavior tarnishes the reputation of Ferrari’s brands and causes Ferrari further material damage. In fact, the undesired connection between Ferrari’s trademarks on the one hand, and Philipp Plein’s line of shoes (and the questionable manner in which they are promoted) on the other hand, is interfering negatively with the rights enjoyed by the Ferrari’s selected licenses.”

The law firm supposedly went on to say that “Ferrari will bring this further unlawful, unfair, and harmful behavior to the attention of the Courts” if the photos aren’t taken down within the requested timeframe.

Plein has numerous photos of his ostentatiously colored sneakers, bikini-clad women, and even himself posing next to his 812 Superfast, all of which is pretty standard for someone of his stature living a lavish life in the 21st century. As of this writing, it appears the timeframe passed and Plein thus far has refused to take the photos down.

In all, we’re not sure why Ferrari is purportedly up in arms over this. As Jalopnik pointed out, this is the sort of lifestyle that some Ferrari owners tend to lead from time to time. And if you go back to the decades when Ferrari was selling brand new 250 models, their cars were often associated with the wealthy jet setters of the world. One classic Ferrari 250 heading to Pebble Beach auctions was even owned by a well-known Italian "playboy" who, if alive today, might've very well showed off his money in a similar fashion.

The Drive has reached out to Ferrari for confirmation and comment on the situation and will update this article with its response.