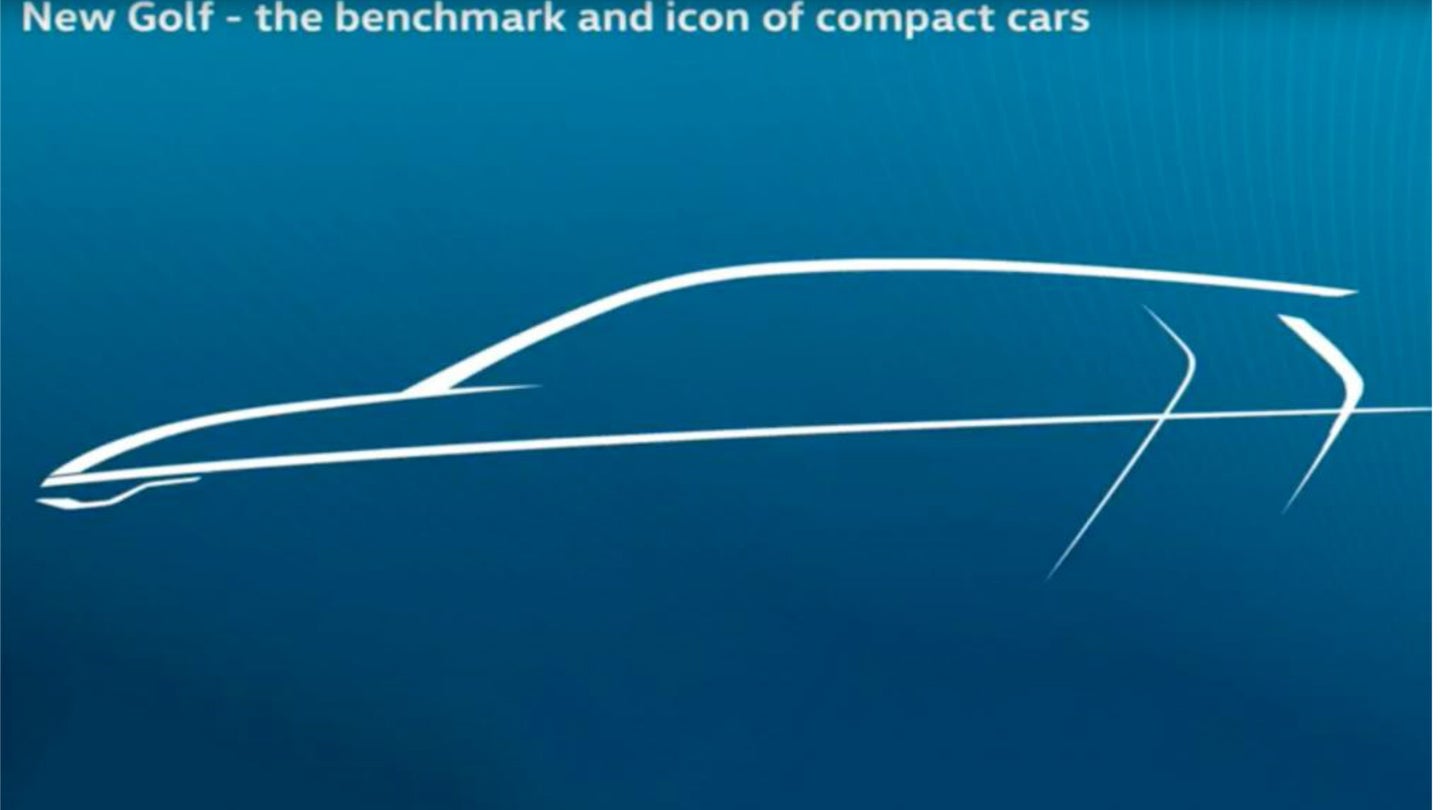 A teaser sketch of the upcoming Mk8 Golf was revealed to employees and investors during a recent annual meeting in Germany. The image reveals that the eighth-generation Golf will be lower, wider, lighter, and slightly longer than the current model. It also reveals that the Golf will adopt VW's latest headlight design as seen on the European-Spec Touareg. The all-new hatch is scheduled to debut in the summer of 2019 ahead of the fully-electric I.D. hatchback.

While VW has not spilled any additional beans on the upcoming Golf hatchback besides this sketch, the automaker has confirmed to Auto Express that the Mk8 Golf will start rolling off the line at the manufacturer's Wolfsburg plant in June 2019.

In terms of importance, Ralf Brandstätter, VW's chief operating officer said that it is on par with the introduction of the company's range of I.D. electric cars.

"The next Golf will take Volkswagen into the era of fully connected vehicles with extended autonomous driving functions," said Karlheinz Hell, Volkswagen's small car boss. "It will have more software onboard than ever before. It will always be online and its digital cockpit and assistance systems will be the benchmark in terms of connectivity and safety."

In the Golf's 43 years of existence, the Mk8 will undergo one of the biggest transformations as the automaker prepares to roll out hybrid technology, slim down the model lineup and completely overhaul the interior design and layout. However, like the current Golf, the eighth-generation Golf will ride on the same MQB platform and feature many of the current engine and transmission pairings. For Klaus Bischoff, VW's design boss, the interior design of the Mk8 Golf had to be a total rethink and a revolution. If that is true, then it means that the digital instrument panel will become a standard feature across the Mk8 Golf model ranger rather than being an optional feature on higher-end models.

While VW is scheduled to launch at least five dedicated battery-powered vehicles by 2025, the next Golf remains the brand's focus according to Herbert Diess, Volkswagen's CEO. In 2017, Diess told Auto Express that the Mk8 Golf will be the brand's main core product and the company is committed to its development despite the firm's shift towards a greater number of electric vehicles.

With the implementation of additional lightweight materials during construction, the Mk8 Golf will be at least 70 kilograms (154 pounds) lighter than its predecessor. Design wise, the exterior of the Mk8 won't change dramatically when compared to the Mk7, but the new hatchback will feature a lower hood, wider fenders, and slimmer LED headlights and taillights.

Along with conventional gasoline and diesel engines, the Mk8 Golf will be the first VW model to feature mild hybrid technology with the implementation of a 48-volt electric system on certain variants. Mr. Diess said that "Mild hybrid systems will play a major role in the next generation of Golf; that will be the first application."

While the current 1.5-liter turbocharged four-cylinder gasoline engine is carried over into the Mk8 Golf, the 1.6-liter turbocharged diesel engine will be replaced by a new 1.5-liter mill. Additionally, the GTI and Golf R variants will also get a bump in the power output up to 250 and 350 horsepower respectively.

In Europe, the Golf GTE plug-in hybrid will still be offered, but the e-Golf is dead due to the arrival of the I.D. family, Diess confirmed.