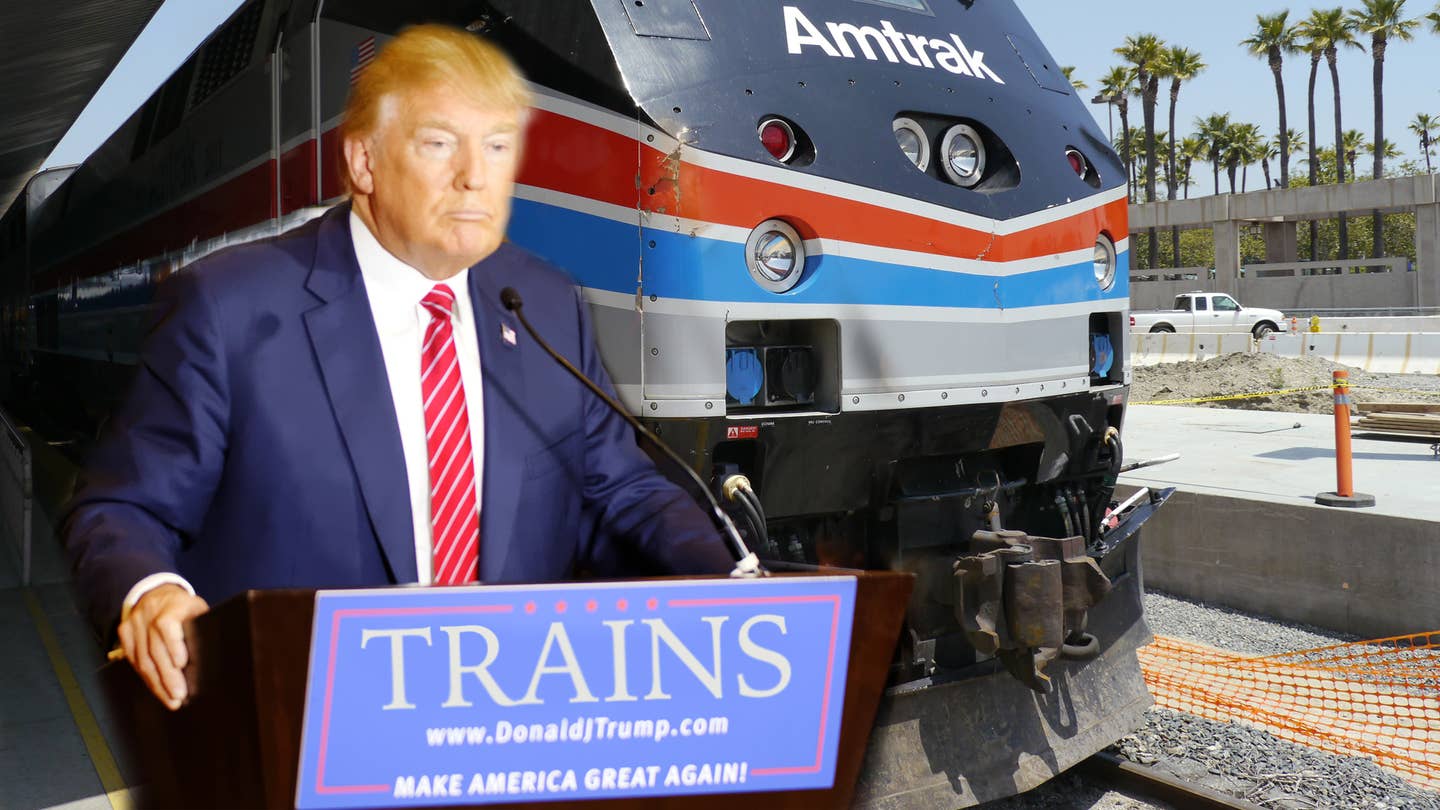 Barring some sort of political upheaval the likes of which America hasn't seen since Henry Ford was cranking out Model Ts, former reality TV personality and combover connoisseur Donald J. Trump is going to be the Republican Party's presidential candidate. It's a thought that terrifies conservatives and liberals alike for myriad reasons. But for hardcore fans of high-speed rail, a Trump Administration might actually be good news. As it turns out, The Donald and The Democrats are on the same page when it comes to upgrading America's trains.

During a speech on March 3, Trump's train of thought briefly switched tracks from castigating Mitt Romney to extolling the virtues of train travel. More specifically, he used it as an opportunity to hit one of his most crowd-pleasing talking points: how America is lagging behind China, and how the U.S. needs to invest in infrastructure to catch up.

Like many statements Trump makes, it's a little soft on the facts—China has exactly one high-speed maglev train, and it tops out at 274 mph—but in principle it's fairly spot-on. China is kicking America's ass when it comes to investing in modern rail technology. Just as Japan is kicking America's ass in the field. As is South Korea. And Germany. And France. And the United Kingdom. Basically, every other major country is making us look like chumps when it comes to trains.

And El Donaldo will not allow America to look like a chump. “Our airports, bridges, water tunnels, power grids, rail systems—our nation’s entire infrastructure is crumbling, and we aren’t doing anything about it,” he wrote in his 2015 book Crippled America, where he argued for greater government investment in infrastructure. “These projects put people to work—not just the people doing the work but also the manufacturers, the suppliers, the designers, and, yes, even the lawyers. The Senate Budget Committee estimates that rebuilding America will create 13 million jobs.”

If these political points sound familiar, well, they should—they're basically the same ones Democrats have been saying for years. The Obama Administration has been advocating for increased infrastructure spending for years, only to be frequently blocked by...drum roll, please...the Republicans. (Both of Trump's main rivals, Senators Marco Rubio and Ted Cruz, voted against the president's latest infrastructure package.) And in fact, one of those large-scale investments the current administration has been pushing for is a high-speed rail network that would ultimately span much of the country.

Yeah, a Trump Administration would probably be disastrous for a lot of different reasons. But if we got more high-speed rail out of the bargain...well hey every dark cloud has a silver lining.