2019 Mercedes-AMG A35: An AMG for the Pikachu Generation

With its Instagram-worthy badge and electric paintwork, Mercedes-AMG has seemingly built a car for youths. 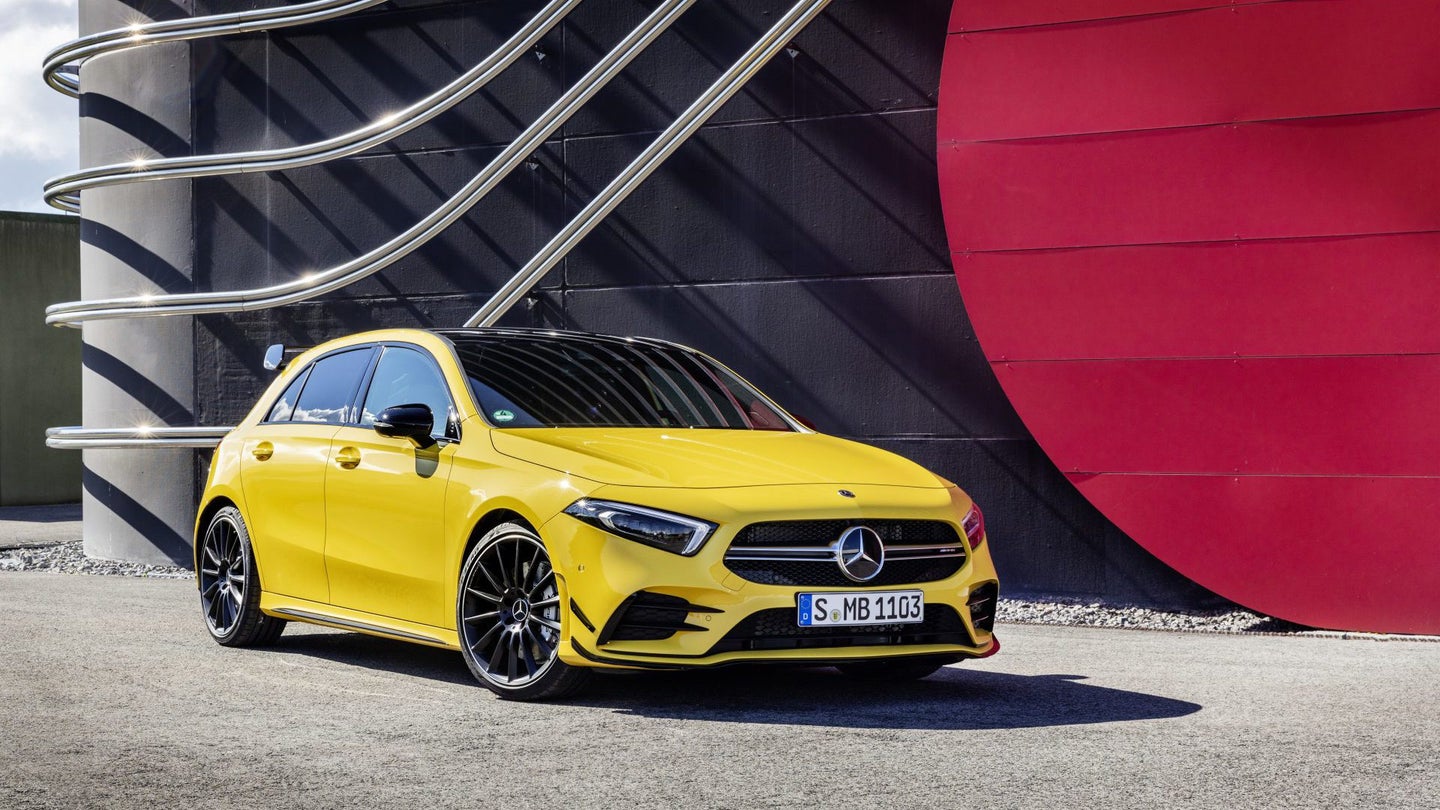 Topline: With a faster engine and more furious bodywork, AMG's 306-horsepower A35 hot hatch is seemingly a Mercedes for the speed-obsessed and boyish. It'll serve as an entry model to the AMG brand—provided you live outside of the U.S., that is.

What's New: The first of two planned, hot variants of the new A-Class hatchback (more on that later), the A35 is powered by a 2.0-liter, turbocharged four-cylinder pumping out 306 horses and 295 pound-feet of torque. That grunt is sent to all four wheels via a seven-speed, dual-clutch automatic transmission, resulting in a zero to 62 miles per hour time of 4.7 seconds. Its top speed is electronically limited to 155 miles per hour.

To get the A35 through corners more quickly and in a more satisfying manner than the relatively humble hatch on which it's based, the car gets an aluminum shear panel and additional bracing under its engine for a stiffer front end, brake-based torque vectoring, optional adaptive dampers, high-performance brakes, and a front-biased all-wheel-drive system that can go from pure front-wheel drive to a 50:50 torque split between the front and rear axles.

On the cosmetic side of things, AMG has graced the A35 with the typical hot-hatch trimmings. Some bumper canards, a small front splitter, rear spoiler, rear diffuser, and 18-inch wheels visually set this car apart from the non-AMG A-Class. With its Pikachu yellow paint job, the Benz you see here might look, erm, overly youthful at first glance. But considering this is the same segment that gave birth to the Honda Civic Type R and the fact that kids who actually grew up with Pikachu have now graduated from college and are likely right in the A35's target demographic, this looks par for the course.

Quotable: "With the new A35, we are fulfilling our brand promise of driving performance in every detail and offering thrilling lateral dynamics at the level of today's A45," said Mercedes-AMG CEO Tobias Moers.

What You Need to Know: The Mercedes-AMG A35 is poised to do battle with cars such as the Volkswagen Golf R and Ford's Focus RS—the hottest hatchbacks money can buy. However, Mercedes has confirmed that an even hotter A45 is in the pipeline. Previous rumors have pegged that car to push the segment to new performance heights, cranking out more than 400 horsepower.

The 2019 A-Class Sedan will be the first-ever A-Class variant to be offered for sale in the U.S.