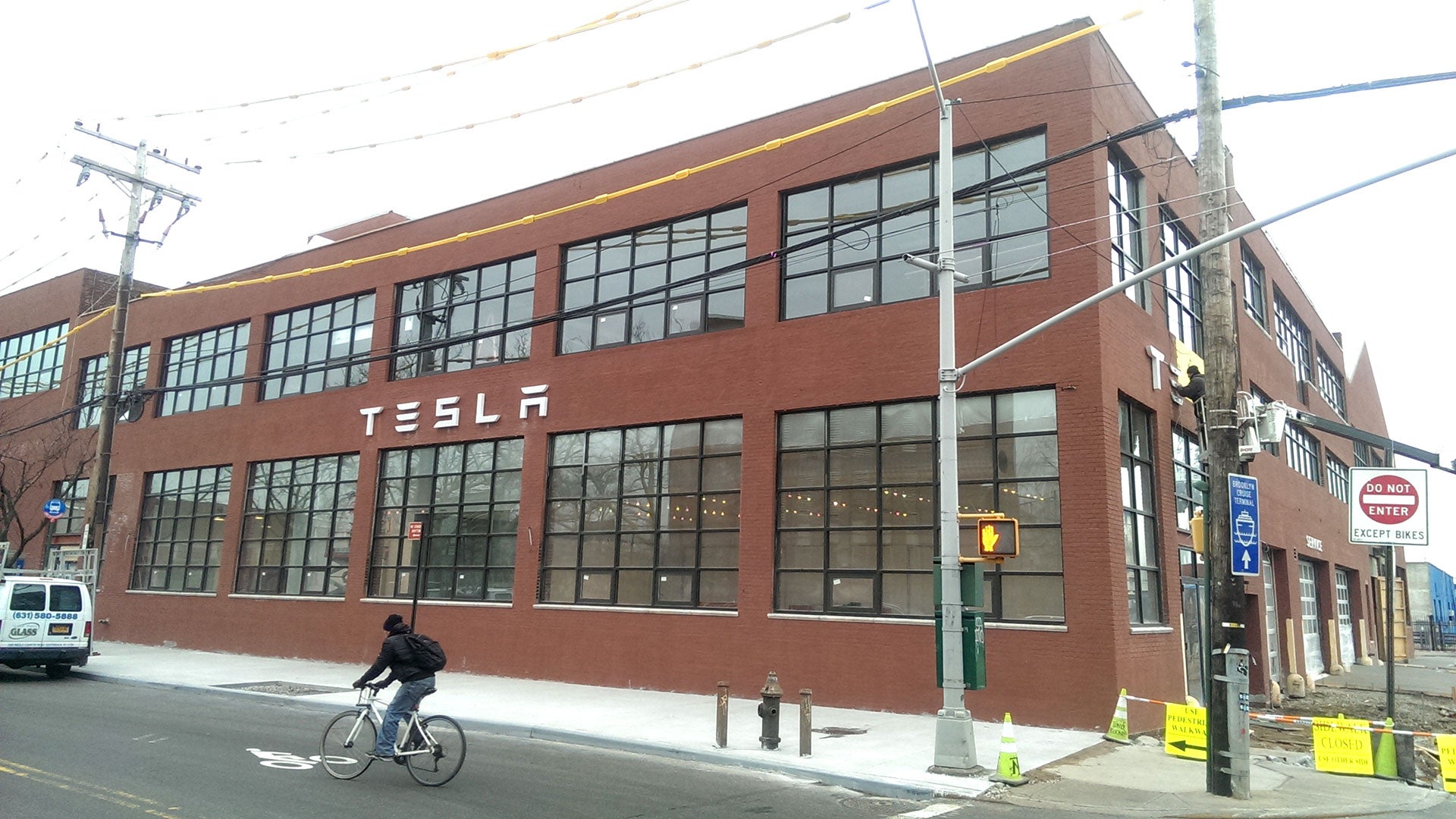 Like I do most every evening, I hung a left at the marine terminal docks in Brooklyn as the lights of One World Trade Center winked at me from across New York Harbor. And there it was: a newly erected Tesla Motors sign, replacing the neon “Red Hook” script that had long welcomed visitors to this waterfront locale. It’s a neighborhood that’s followed a familiar Brooklyn trajectory: settled by New Amsterdam Dutch in the 1630s, a booming maritime district in the 19th century, a decline into a scary no-go zone in the 1970s. And now, rediscovered and quickly gentrifying as artists, metalworkers, restaurateurs, distillers, and developers fight over every overpriced square foot.

As with many New Yorkers faced with interlopers in their no-longer-secret paradise, the sight of Tesla’s soon-to-be showroom prompted this thought: There goes the neighborhood.

But honestly, as long as Tesla doesn’t prove to be an asshole neighbor—shoppers tearing down Van Brunt Street in Ludicrous mode, Tesla organizing rallies against the types of gas-guzzling Jeeps, Land Cruisers, and vintage pickups that proliferate around here—we should be fine. We’d be hypocrites to rail against another entrepreneurial presence, even one from Silicon Valley—The Drive itself already made the now-familiar Hajj from Manhattan. We’re just down the road from Tesla in Industry City, a 6-million-square-foot complex that was devastated by Hurricane Sandy in 2012.

For Tesla, setting up shop in Brooklyn must have felt nearly inevitable. As reported by Curbed, their leased 40,000-square-foot Brooklyn store, along with a service center and offices, will anchor what developer LIVWRK hopes is a magnet for start-ups and tech companies in the former Golten Marine Terminal.

It arrives in the midst of Brooklyn’s seemingly unstoppable renaissance, from a backwater of 2.6 million residents (1 million more than Manhattan) to trend-setting cultural destination. Paris’s swanky Left Bank department store Le Bon Marché Rive Gauche devoted its fall cultural theme to Brooklyn. An explosion of luxury housing—the bane of aesthetes in Brooklyn’s Williamsburg especially—will soon include a downtown tower whose 1,066 feet and 73 stories would nearly double the borough’s previous high.

Tesla will certainly recognize the local clientele, a diaspora of hyper-educated, green-minded Manhattan progressives worthy of a guest shot on Portlandia. Most don’t splurge on new luxury cars, though Model S’s are a not-uncommon sight in brownstone Brooklyn. Contrary to outsiders’ stereotypes, virtually everyone I know in Brooklyn owns a car, and some more than one. The Tesla store will surely draw from the fertile, Gatsby-esque suburbs of Long Island as well. And when Tesla finally rolls out the roughly $35,000 Model 3 with its 200-mile range, it will need more showrooms in more places to handle an expected rush of middle-class buyers. If that Model 3 performs as advertised, Brooklynites should go wild, even as they put those grad-degree heads together to figure out where to plug in.

Tesla already have a pair of stores in suburban New Jersey, plus a smallish Manhattan showroom nestled among the high-end art dealers of Chelsea (come for a Ruscha, leave with a Tesla). That Manhattan lease expires in July, though Curbed suggests that Tesla is scouting other Manhattan locations.

Among Manhattan dealers, Mercedes-Benz recently built a showpiece showroom on 11th Avenue to complement the stunning zig-zag silhouette of its Mercedes House luxury apartments. Luxury brands Ferrari and Maserati maintain window-shopping presences to entice the Masters of the Universe. But the glamorous era of Manhattan dealerships has waned, including the spiral-ramped beauty designed by Frank Lloyd Wright for legendary importer Max Hoffman, quietly demolished in 2013. That showroom displayed Mercedes from 1957 to 2012. And it was one of just three Wright buildings in Manhattan, including the Guggenheim Museum.

The squat, red-bricked Tesla store won’t match that architectural magic, but renderings suggest a reasonably handsome addition to the neighborhood, a decent place to sip an espresso and lament inaction on global warming. Knowing some of my neighbors, they’ll be welcoming Tesla to Red Hook with fresh baked bread and jam made from hydroponic rooftop garden fruit. But Tesla should be warned about the bad neighborhood element: I’ll be showing up to borrow an extension cord, the one attached to the new Model X.