Steve McQueen Tried to Buy Back His Bullitt Mustang in 1977, Comes Off as Entitled Jerk Today

Or, how not to write a letter to a prospective car seller, especially when you're a big-time Hollywood star. 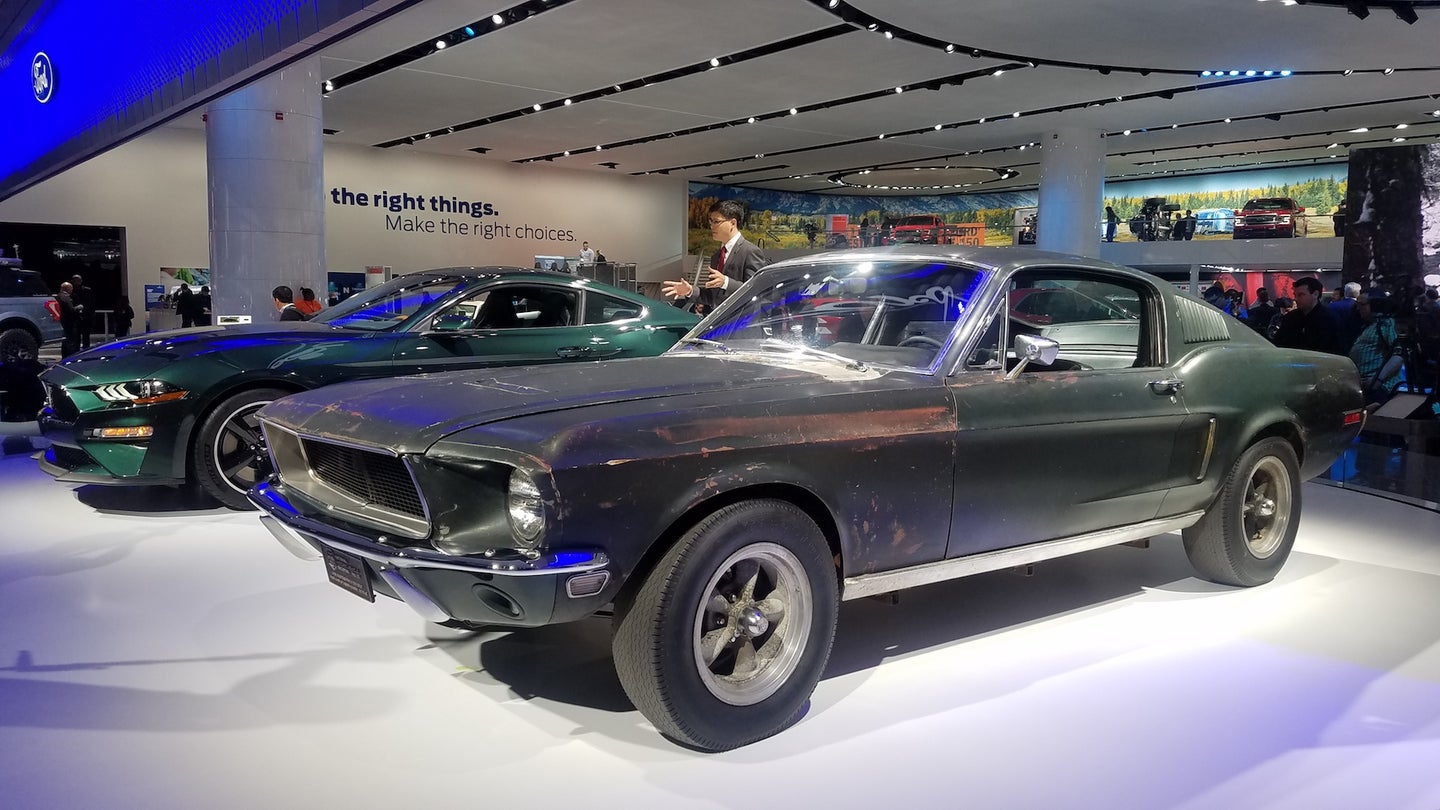 In a 2018 Detroit Auto Show that resembles a truck stop more than a car show, the new Ford Mustang Bullitt stands out as a Highland Green oasis: A hot muscle ‘Stang with at least 475 horsepower, tied to the 50th anniversary of the classic movie Bullitt starring the late Steve McQueen.

In one of the only remotely surprising twists at this shriekingly-dull Detroit show, Ford showed the new Bullitt side-by-side with its inspiration: One of two original, unrestored ’68 Mustangs used in the movie filming, complete with welded tubes on the sides that served as crude camera mounts. A New Jersey man, Robert Kiernan, spotted the Mustang in a Road & Track magazine ad in 1974, and purchased it for $6,000. According to classic-car insurer Hagerty, the Mustang’s clutch blew in 1980, and it moldered in storage for decades until Kiernan died in 2014 and his son Sean got it running and contacted Ford regarding the 50th anniversary celebration.

A glass case near the ’68 and ’18 Mustangs contains some historical references. They include the magazine ad for the “real” Bullitt Mustang—and a typewritten letter from none other than Steve McQueen, written in 1977, offering to buy the car from Kiernan. McQueen had already inquired about buying it from a previous owner, who had purchased the car from a Warner Bros. executive. But if McQueen’s ham-fisted approach in this letter is any guide, it’s no wonder he was unsuccessful the first time. In short, McQueen comes off as a bit of an asshole.

Which isn’t all that surprising. McQueen, for all his iconic swagger and “King of Cool” intensity, was a legendary asshole: An insecure, jealous, drug-addicted misogynist who beat women when he wasn't openly cheating on them. McQueen’s horribly abusive upbringing explains a lot, yet doesn’t excuse the awful behavior: Born to a teenage prostitute, beaten by his circus stunt-pilot father; and abandoned by both before he joined a gang, slept on the streets, and eventually joined the Marines for a deeply troubled stint. His jobs included lumberjack, getaway driver, thief, brothel worker, and pimp, before he moved to New York to study acting.

By 1977, three years before his untimely death, McQueen was itching to recover the "good guy" car, whose 10-minute battle through San Francisco versus a "bad guy" Dodge Charger, is typically cited as the greatest movie chase in history. If only McQueen was as wieldy with words as he was onscreen, or when driving fast cars and motorcycles. The four-sentence letter he wrote, embossed with the logo of his Solar Productions company, sets the entitled tone. When it comes to breaking the ice with the owner of a car you badly want, McQueen couldn’t have done worse:

Again, I would like to appeal to you to get back my ’68 Mustang.

One can only imagine Dear Mr. Kiernan’s reaction to that. Let’s get something straight, Mr. Movie Star: It’s not “your” ’68 Mustang. It’s actually mine, so let’s at least get that straight. Note how McQueen never specifically offers to buy the Mustang, only to “get back” the car, as though Kiernan might hand it over for free. McQueen doesn’t throw out a number for negotiating, or ask Kiernan what he feels the car is worth.

The blue-eyed actor does better in the next sentence with a personal appeal, noting he’d like to keep the Mustang “in the family.” He proceeds to blow it a little, failing to explain his desire to keep the car in original condition. Instead, he offers a brusque, “…which is simply personal to me.” A little actorly bullshit about how much the Mustang means to him, a charming anecdote from the movie shoot, or even how he banged a starlet in the Ford’s backseat, might have done wonders to pique the owner’s sympathy and interest.

And then, it all goes straight to hell:

I would be happy to try to find you another Mustang similar to the one you have, if there is not too much monies involved in it.

Besides the bad grammar, this sentence is dripping with bad faith. McQueen comes off as patronizing, a rich man willing to do a solid for a regular guy, but treating him like a rube. A "similar" car? For chrissakes, McQueen, you’re a Hollywood star, not an insurance adjuster: Tell the man you’re determined to compensate him fairly, even to pay a nice premium for this rare, significant Mustang—not some crap about finding a replacement that’s clearly no substitute for the Bullitt ‘Stang he already owns.

If McQueen, who died of cancer in 1980, had lived long enough to see eBay, he might have recognized himself as the essence of the not-serious car buyer, the guy who’s jerking you around and wasting your time. If McQueen really wanted the Mustang so badly, he could have said, “Tell you what, the car means an awful lot to me. You paid $6,000, so I’ll give you $20,000 for it. I’ll send a trailer over, plus a few autographed photos and Bullitt souvenirs for your family. Do we have a deal?” It’s possible that Kiernan would have jumped at that kind of sincere, generous offer.

Instead, McQueen adds a fateful capper. Busy star that he is, McQueen insinuates that he’s not willing to expend too much effort, so Kiernan had better make up his mind: “Otherwise, we had better forget it,” he writes of a car for which he still hasn’t made a genuine offer.

McQueen closes with a “Kindest regards, truly yours, blah blah,” but at that point Kiernan was probably too balled up with laughter to notice. And the upshot, especially in an era when civilians were less bowled over by celebrity status, isn’t surprising: Kiernan never responded to McQueen’s letter.