One of the cleanest retro rigs we’ve ever seen. 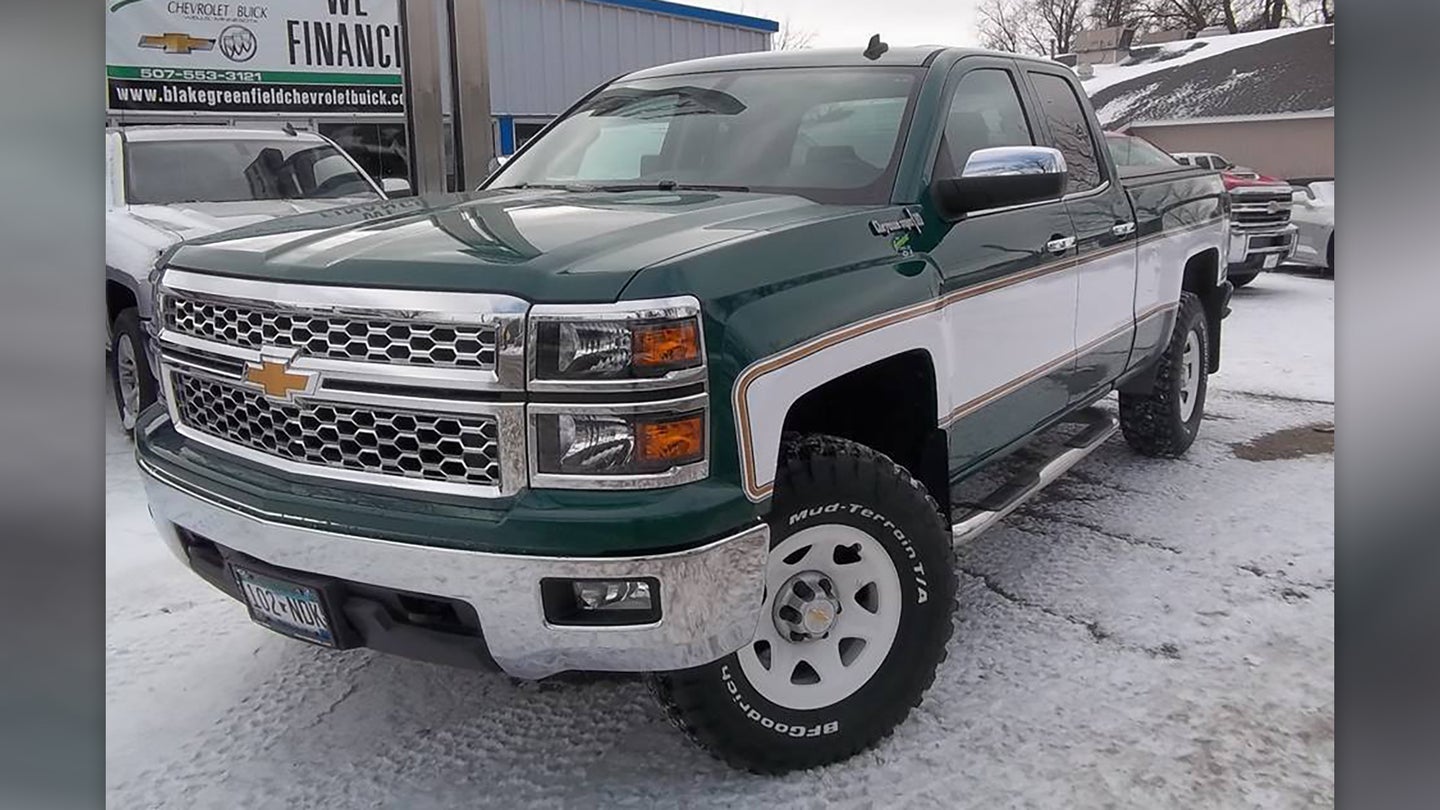 It seems we're plunging into something of a retro pickup truck craze, and frankly, we couldn't be happier. A few months ago, word spread that a dealership in Georgia was converting stripper F-150s into modern-day Ford SVT Lightnings with 650 horsepower. In November, GMC pulled the wraps off its disco-era Desert Fox concept. And now, a small Chevrolet dealer in Minnesota has resurrected the two-tone paint job, white steel wheels, and square body styling of the Cheyenne trim from the Seventies on a brand-new 2017 Chevy Silverado LT—and the result is just about perfect.

America's full-size trucks may not change all that much from year to year, but there's no question that we've come a long way in the decades since General Motors introduced the Cheyenne nameplate for its top-level Chevy trucks in 1971. Hell, all it takes is one look at the new Silverado Centennial Edition parked alongside its ancestor to see that. Those changes have brought comfort, safety, and capability, but it's been at the expense of a certain humbleness in both design and spirit that makes the old guard so appealing.

Apparently, the crew over at Blake Greenfield Chevrolet Buick agrees, because they've just unveiled their take on a modern square-body truck. If you think modern trucks are overstyled, overcompensating beasts, you'll be amazed at how effectively a well-executed two-tone paint job brings this 2014 Silverado LT back to basics. Throw in the old-school white steel wheels and white-lettered BFGoodrich tires, the retro Cheynne Super 10 badging, and a high-clearance front bumper, and it's just about the cleanest take on a retro rig we've seen yet. Nothing about it is overdone or excessive.

That's not to say it's not comfortable. The Cheyenne Super was the top-shelf Chevy truck of its day, boasting options like interior woodgrain and (gasp) air conditioning, and the Blake Greenfield Chevrolet Buick version retains all the features of its Silverado LT base. And in response to what it describes as "overwhelming" national interest, the dealership has made plans to start building these conversions in earnest. Customers will be able to buy a new Cheyenne Super 10 off the lot, or bring in their current GM truck for an old-school makeover, but don't get too excited about the model in these photos—it's already been sold.

We reached out to the dealership for more information, and spoke with an exceedingly nice salesman named Aaron Nasinec. He told us the project was the brainchild of Blake Greenfield himself, who was inspired after seeing the green 2014 Silverado traded in with 81,000 miles on the clock. That classic, deep color, one of Greenfield's favorites, was the impetus for everything.

"He pretty much went bonkers about it when he found out it was this color green," Nasinec said. "Within the next week, he had it in our shop doing the lift and the wheels. We were thinking, 'what is he doing? What's going on?' And then when he brought it back from his vinyl guy, right when he pulled into the driveway here, I'm like, yep, that's it. I see it. He had this vision in his head the moment he saw this truck. It just turned out phenomenal."

No argument there. As of now, the dealership is offering the package on any GM truck from 2014 onward for $5,995, though individual parts of the design can be purchased separately. The next project will be a 2017 double cab Silverado in Red Hot with a white accent, and if you're interested, that one is up for grabs. The dealership hopes to be able to customize every part of these builds to suit individual customers' needs.

That not exactly chump change, but again, this is the Cheyenne we're talking about. We can gripe about the luxification of the pickup market, but at least this truck is true to form.

Can’t figure out how to use any of your new Ford’s features? Help is on the way.