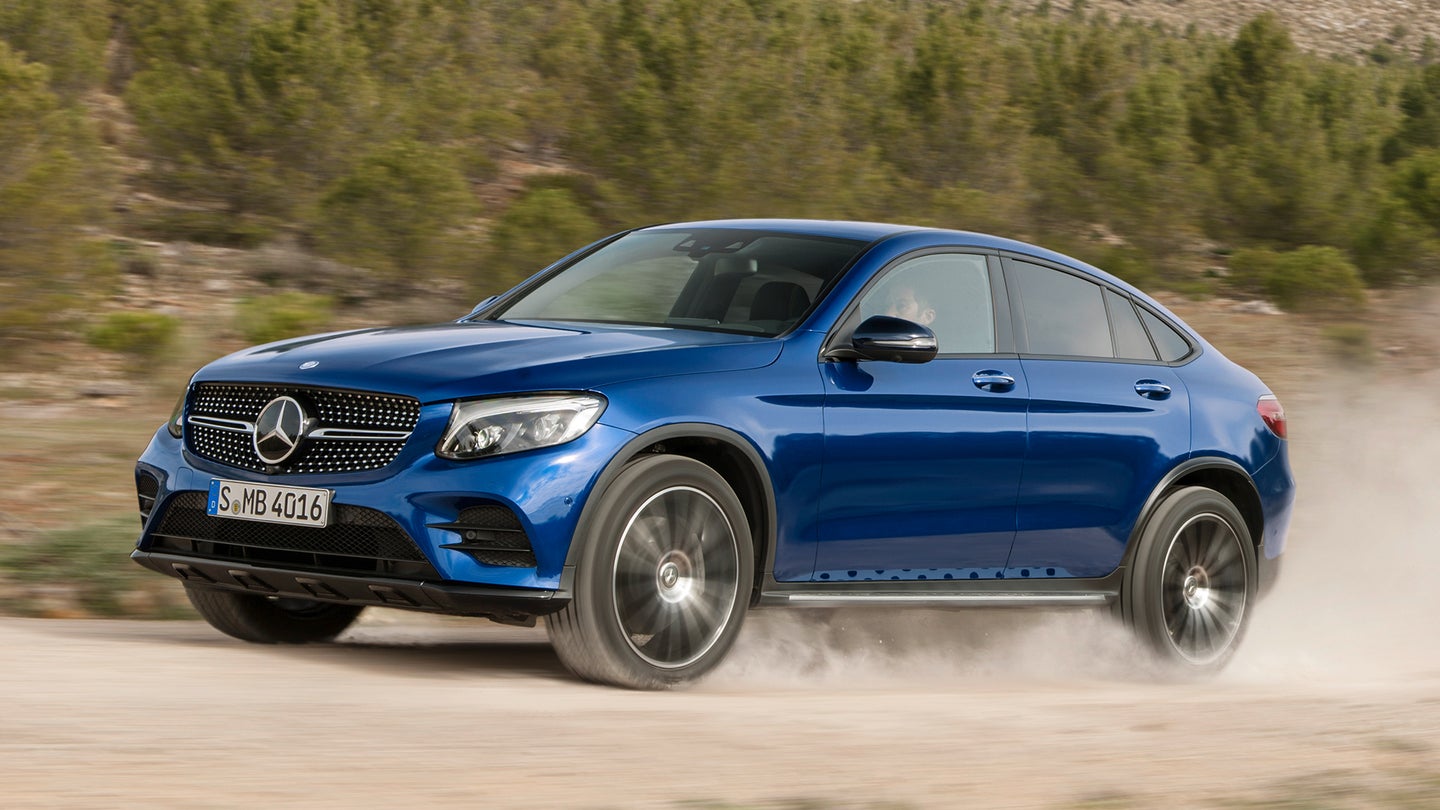 Welcome to Critic's Notebook, a quick and off-the-cuff collection of impressions, jottings, and marginalia on whatever The Drive writers happen to be driving. Today's edition: The Mercedes-Benz GLC300 4MATIC Coupe.

Who Is it For?

Urban-dwelling, fashion-conscious empty nesters who fell in love with SUVs while shuttling their kids around years ago, but don’t need the size or the boxiness of a traditional crossover.

Where Did We Test It?

It’s most definitely a Mercedes-Benz. Even if you weren’t familiar with the styling cues of Mercedes’s current design language—the LED swoosh crossing the headlight, the strong haunches—that three-pointed star on the grille, sized between a grapefruit and a volleyball, is a dead giveaway.

Thing They Don't Want You to Notice, But You Do Anyway

That "coupe“ body style is really more of a fastback sedan. It’s reminiscent of the old Saab 900, in an odd way.

Car Is Good at

Being classy inside. Like Mercedes-Benz’s other new models, the GLC-Class seems primed to help knock Audi off its perch as the best purveyor of mass-market luxury interiors. The two-tone red-and-black leather seats in my tester—sporting Ferrari Daytona-style horizontal bands, no less—were as glamorous as they were comfortable on my four-state drive. The swooping center console has grown more familiar since it first appeared in the C-Class a few years back, and consider me in the approving minority when it comes to the iPad Mini-like display for the COMAND infotainment system affixed up high.

Car Is Bad at

Being subtle outside. Between the aforementioned giant emblem up front, the slightly-smaller one on the back that doubles as a secret latch for the tailgate and the hidey-hole for the rear view camera, and the odd tapering effect caused by the giant rims and the diminutive greenhouse, and the end result is a car that does not blend in at the Costco parking lot.

I’m a hard "maybe." The basic GLC-Class platform makes for one outstanding compact crossover, and that hasn't been diluted by the transition to four-door "coupe"; it’s more fun to drive than most of its ilk—though I wouldn’t go quite so far as to endorse Mercedes-Benz’s “Part SUV. Part sports car” marketing tagline.

But the coupe-like rear roofline is hard to sign off on. It certainly gives up some space compared with the standard GLC—and while the regular GLC's tail end isn’t particularly appealing, it’s not so ugly as to require being excised and replaced with an ass that looks like it shares some DNA with an AMC Pacer. Taking the “stylish” option of the GLC lineup also means sacrificing some rear visibility, so if you’re paranoid about the 5-0 riding your six, this probably isn’t the car.

Making the choice a little harder is the fact that Mercedes doesn't charge all that much of a premium for the "stylish" rear end. The GLC300 Coupe, which comes standard with Benz's 4MATIC all-wheel-drive, only costs $4,800 more than an equivalent two-box GLC; add in the fact that the Coupe packs some regular GLC300 options as standard (19-inch wheels, LED headlights) and the difference starts to close up surprisingly quickly.

Would I buy a GLC-Class? Absolutely. I'm just not sure whether I'd buy this GLC-Class.

As an automotive journalist, I often find myself among the ranks of people disparaging the American obsession with SUVs. And yet, after knocking out close to 800 miles of urban highways, down muddy country roads, and everything in-between, it’s hard not to see the appeal in the crossover. After decades of development, most of the compromises have been bred out of the class—at least, when you reach Mercedes-Benz levels of quality.

The GLC rides as nicely as any C- or E-Class sedan, even on the standard 19-inch wheels; it turns in decent fuel economy (I saw around 26 miles per gallon overall); and it feels every bit as spritely in the day-to-day as any other Mercedes motivated by the carmaker’s turbo four. It lacks for little in luxury or technology, with almost every option to be found in the Benz catalog of fanciness available either standard or as an option. And on top of all that, it can gallivant over potholes, through thick, sticky mud, and across rough terrain better than any conventional car.

Perhaps, then, the greatest attribute of the Mercedes-Benz GLC300 Coupe isn't its style or its prestige. It's the fact that it proves the world can be a decent place even once everyone has traded in their sedans and station wagons for SUVs.

Swoopy SUV to show its face next week.