Ford's Baja-racing pickup is a wild desert dog, with a sneak-peek version of the Ford GT's V6. 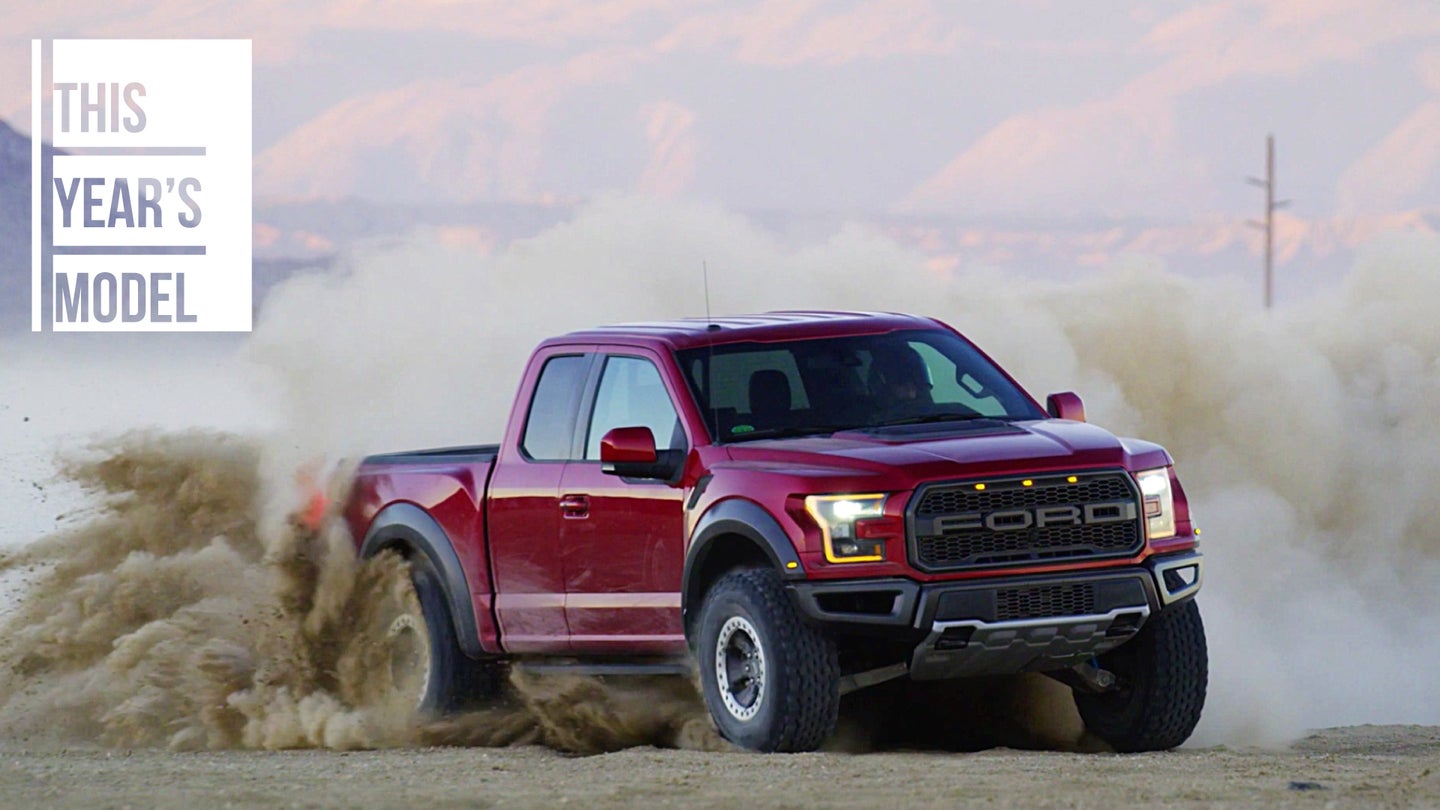 A pickup That Conquered Mexico and Blurs Market Borders

We know that the 2017 Ford F-150 Raptor is a toy for big boys. But here’s the real question: How big is your sandbox? Back in November, Ford’s second-generation Raptor pickup—in nearly stock trim—managed to complete the grueling 845 miles of the 49th SCORE Baja 1000 in Baja California, Mexico. Then its crew drove the racing truck home to regular California. Point being, the Raptor will tolerate a daily commute, and its bawdy power makes it an oddly pleasurable partner in the urban jungle. On New York streets, the mile-wide Raptor reminded me of Jon Voight’s hayseed hustler in Midnight Cowboy: Incongruous, yet somehow fitting.

Even still, the proper enjoyment of this desert-storming, dune-bashing, mud-bogging monster may hinge on the number of acres in your personal spread; your proximity to wide-open (yet legal) spaces; or your taste for trespass. Lacking enough time to visit the gravelly playground of Team O’Neil Rally School in New Hampshire, I had to settle for impromptu pleasures. Speed bumps in Brooklyn? Pshaw. The Raptor flattened them at 40 mph like they were pennies under its knobby tires. Ditto for concrete islands in a deserted parking lot, no match for a Fox-Ford suspension that boasts a ridiculous 13 inches of front travel and 13.9 inches at the rear. (For comparison’s sake, a standard F-150 pickup with an FX4 off-road package has 7.3 inches of front suspension travel and 9.5 inches out back). Those Fox shocks include 3-inch-diameter canisters (up from 2.5 inches in the first-gen Raptor), with nine stages of bypass damping and hydraulic bump stops to avoid bottoming out. I never caught air with all four wheels, but the Raptor is eminently capable of such juvenilia.

With its skyscraping height, a six-inch wider track than a stock F-150, and B.F. Goodrich KO2 all-terrain tires on 17-inch off-road rims, the Raptor looks mean, but not overly cartoonish. A front skid plate wraps the Ford’s uptilted chin like a gleaming goatee. Orange LED’s frame the headlamps, and monochrome “FORD” letters appear carved from granite within a coal-black grille. Protective-coated running boards are perforated for easier hose-down.

Interior an Oasis From the Off-Road Storm

Inside, it’s familiar F-150, meaning reams of storage and creature comforts, from a mammoth center console and color-adjustable ambient lighting to the now-decent Sync 3 infotainment touchscreen. You’ll find four USB ports and a pair of 110-volt outlets. The Raptor gussies things up with a leather-wrapped sport steering wheel (with nicely placed thumb rests); thicker-bolstered front bucket seats with heating and cooling and racier analog gauges that bookend a digital driver’s display. Cameras offer 360-degree outward views, including a useful glimpse of obstacles ahead of the front tires. A half-dozen auxiliary switches in the headliner allow hookups to light bars, air compressors or other aftermarket gear.

A black-finned hood extractor sucks heat from the hard-charging engine below: A twin-turbo Ecoboost V6 that squeezes 450 horsepower and 510 pound-feet of torque from 3.5 liters of displacement. A version of that mill, cranked beyond 600 horsepower, will power the spectacular Ford GT supercar. In other words, you won’t miss the previous Raptor’s old-tech, 6.2-liter V8, which produced 39 fewer horses and 76 fewer pound-feet. The new V6 more than doubles the V8’s power density, and gooses Ford’s standard 3.5-liter V6 by 85 horsepower and 50 pound-feet. The V6 delivers a meaty, satisfying blat through a true dual exhaust, enough to drown out the whistling tune of the turbochargers.

Goodies include dual port- and direct fuel injection, piston-cooling oil jets, a lightweight cam and high-boost turbos with an electrically actuated wastegate. That’s twinned with a paddle-shifted automatic transmission whose 10 speeds are a first among pickup trucks. The compact 10-speed  helps boost the Raptor’s fuel economy to a combined 16 mpg, a 23-percent boost from the previous 13 mpg. I saw closer to 14 mpg during my mostly lead-footed excursions. Good thing the fuel tank swallows 36 gallons: You wouldn’t want to get stranded on the trail.

Nothing Phony About This 4x4 Monster Truck

To cover ground like a scalded Sasquatch, the Ford combines a clutched, on-demand AWD system with a genuine, driver-selectable mechanical lock for high- and low-range 4WD. That includes a torque-sensing Torsen differential on the front axle, with a 4.10:1 ratio, for serious low-speed rock crawling. As in a Range Rover, Ford’s new Terrain Management System offers a half-dozen pushbutton settings for a range of conditions: Normal, Sport, Weather, Sand/Mud, Rock Crawl and Baja. The latter is designed for high-speed desert rips, no matter which side of the Mexican border you’re on.

Adopting the aluminum skin and chassis of the latest F-150, the Raptor has shed about 500 pounds. You’re still looking at a 5,500-pound pickup, albeit one that can rock to 60 mph in about 5.3 seconds, and trip a quarter-mile in 14.1 seconds. And it greatly prefers that you test that capability over washboard surfaces and around sagebrush slaloms.

On straight-line streets, the Raptor will still roar past most pickups and SUVs. But the handling—steering, pitchy body motions, lateral roadholding grip—is compromised by and biased toward that off-road mission.

The Raptor steers like the softly sprung truck it is: Better than, say, Mercedes’ off-roading G-Class, but crude and understeering compared with any street-based SUV or crossover, from a Range Rover Sport to a BMW X5. The Raptor’s bump steer on rough pavement is positively wicked. On the narrow, roller-coaster Taconic Parkway north of New York, mid-corner bumps yanked the Ford’s steering wheel and threatened to pitch me into a guard rail if I didn’t hang on tight. Brakes haul the Raptor down with reasonable aplomb, but the pedal feels smushy and vague. The 10-speed shifts smoothly and avoids excessive gear-hunting; but it also tended to ignore paddled commands to downshift, sometimes for as long as two seconds.

For all that, the Raptor is a silly smile-maker for people (including me) who like old-school analog trucks. In its element, a 22-degree breakover angle up front, with 23-degrees of rear departure angle, allow the Ford to climb and descend super-steep grades.

If I lived in New Mexico, I’d have found a million excuses, and an equal number of acres, to exercise the Raptor. But east of the Mississippi especially, there just aren’t many venues for high-speed off-roading without trespassing on someone else’s land or putting yourself or others at risk. Are you really going to blast down a forested dirt road or two-track at 60 mph, with no clue as to what’s coming around the curve, or if there’s a hiker or biker over the next rise? If so, you’re not an off-roader, just a reckless asshole.

Fortunately, the Raptor has another trick up its muddy sleeve: It’s a dream truck for transporting dirt bikes, snowmobiles or other toys, including a 6,000-pound towing capacity. That dream becomes automated fantasy with the F-150’s optional Pro Trailer Backup Assist. From nervous rookies to experts, the camera-based system makes it ridiculously easy to back up the truck and a hitched-up caboose. The driver watches the center screen and uses a rubberized knob to direct the trailer backwards, while the Ford automatically dials the steering wheel.

Of course, you can tow just fine with a beater truck, or a stripper F-150 that starts from $28,000. The Raptor starts from $49,520 for the SuperCab version I tested, or $51,520 for a Raptor SuperCrew with four full-size doors. Add options—including a $9,345 package whose features included the Pro Trailer tech, voice-activated navigation and a Sony audio system—and my Raptor checked out at $62,850.

The Raptor splatters pickup budgets the way it splatters mud. Yet Ford’s Baja baby is certainly unique: You won’t find anything remotely like it from Chevy, Dodge, Toyota or Nissan. I’d still make sure you have remote destinations in mind before you buy one.