BMW's hybrid SUV checks off mileage, performance and luxury, but the cost is steep and the plug superfluous. 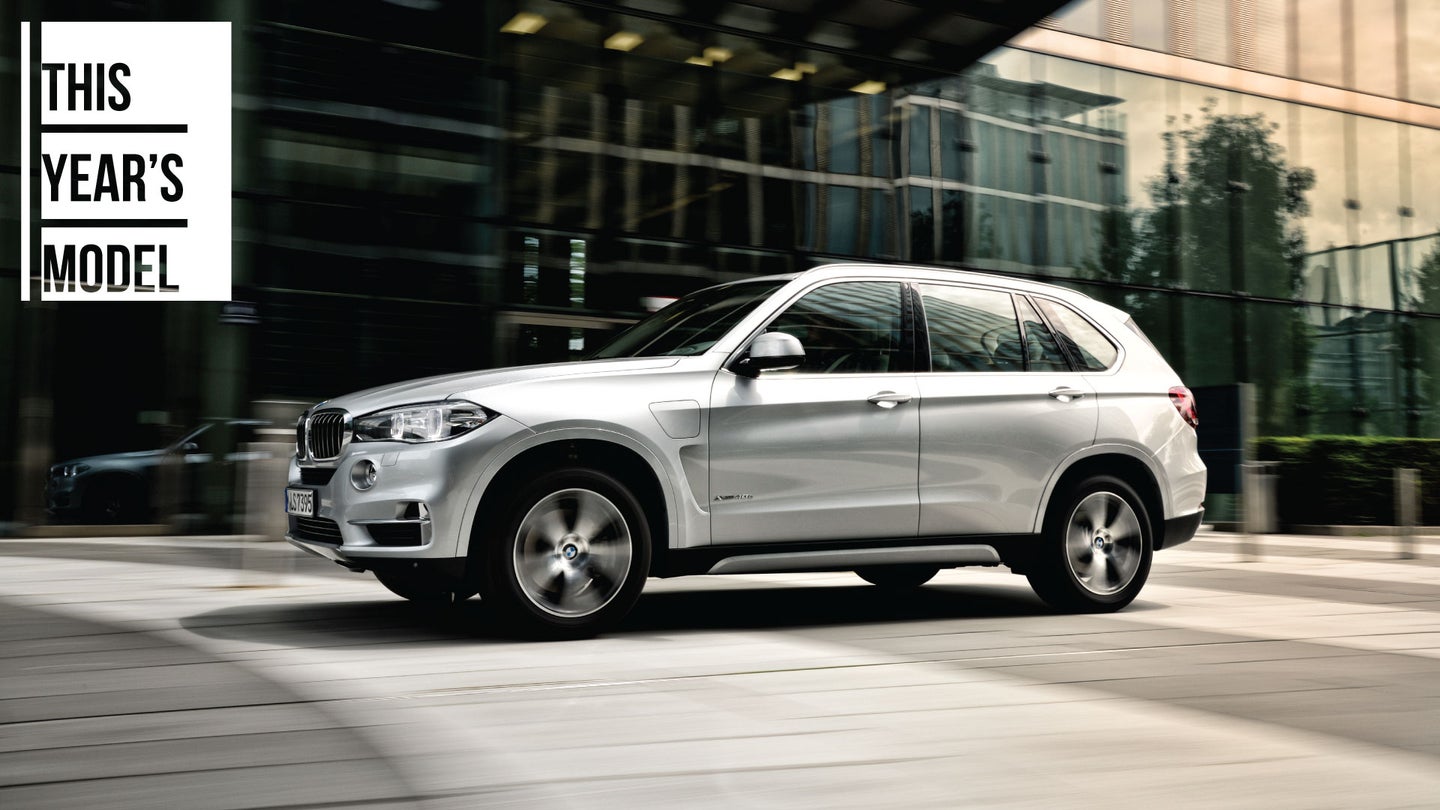 What is it with German plug-in hybrids? They're expensive and short on long-term energy. You'd be forgiven if you thought BMW, Mercedes, Audi and Porsche are only tinkering with them to give bored engineers something to do, or to keep various governments and agencies off their backs—but we’d never say that out loud.

As the first production plug-in from the core BMW brand (meaning, not counting the i3 urban buggy and i8 sports car), the X5 xDrive 40e does boost fuel economy without losing sight of its ultimate-driving mission. Like the Porsche Cayenne eHybrid, that electric attitude comes at a price: $63,095 to start, or $4,300 more than an all-wheel-drive X5 35i and its turbocharged inline six. If premium unleaded cost $5 a gallon, I might be all over this thing. But it doesn’t, so the pluses—fuel savings and robust hybrid performance—are countered by doggy all-electric acceleration and limited range, a squishy regenerative brake pedal and that lofty price.

As a ubiquitous luxury SUV, one that seems to replicate itself in any upscale suburb, the X5 can become a target of condescension when I haven’t driven one for a while. And then I do, and find myself mentally apologizing: The X5 still blends space, smoothness and performance like few other SUVs, even in this hybrid that weighs nearly 5,300 pounds—about 350 more than a gas-only X5 35i. At our first encounter in a snowy Detroit airport parking lot, this X5 looked rich and substantial, with a touch of outdoorsy menace; like a trail runner with stumps for thighs who passes you like you’re standing still. And forget about fuel-saving tires, like the Schwinn-skinny rubber on BMW’s i3. This X5 was shod like a Clydesdale, with bold, deep-dish 20-inch alloy rims and Pirelli Scorpion snow-and-ice tires—including mammoth 315/35R20’s out back.

Sipping and ripping in the Motor City

When it’s running as a conventional hybrid, with most of the giddyap coming from gasoline, this X5 is rated for 24 mpg in combined city and highway driving. That’s a 20-percent improvement over the 20-mpg X5 35i, and 8 mpg better than the premium-slurping, twin-turbo V8 model. But the hybrid does trail the diesel model by 1 mpg overall, and it costs $2,800 more.

As a tag-team, the hybrid system generates 308 horsepower and 332 pound-feet of torque, comparing favorably with the 300 hp/300 pound feet of the X5 35i. BMW’s TwinPower remains one of the world’s supreme four-cylinder engines, with an efficient twin-scroll turbocharger,  variable valve timing and variable camshafts on both the intake and exhaust sides. As in other BMW’s, its 240 silken horses feel more like 300 in real-world operation. A mildly ticking idle, the TwinPower's telltale in some other Bimmers, is swaddled under so much sound deadening in the X5 that I couldn't even hear it.

Even with its extra hybrid flab, the X5 drives great, aside from the aforementioned spongy brake pedal. Transitions between electric and gas power are near-seamless. Flying off a freeway cloverleaf onto the impromptu speedway that is I-696 in Detroit, the BMW claimed fast-lane occupancy rights. In default hybrid mode, the X5 romps to 60 mph in about 6.2 seconds, quicker than the diesel and only about 0.2 seconds behind the six-cylinder 35i. Top speed is limited to 130 mph.

Dynamically, the Bimmer still kicks the Scheiße out of a Mercedes GLE, Acura MDX or Cadillac XT5. It dives into corners with more alacrity than the Audi Q7, itself a delightfully well-sorted SUV. In this snooty class, only the Porsche Cayenne and perhaps the Range Rover Sport can claim more steering sensitivity or smiles-per-mile, but neither is as spacious as the BMW.

Later, as I tend to do with economy-minded cars, I played a game that’s almost as theoretical as EPA numbers: Driving a BMW at the posted speed limit, like a nanny with a busload of precious charges. (Call me the Mrs. Doubtfire of hybrids, EV’s and diesels). Lightly brushing the accelerator, coasting to maximize regenerative juice to the battery, I kept the X5 around 31 mpg with no difficulty, or 6 mpg better than its 25-mpg highway rating. That’s outstanding mileage for this beefcake SUV, and about matches what I’ve seen when driving the diesel X5 in similar gentle-giant fashion.

Open vistas, inside and out

The BMW’s remarkably low beltline remains a high point, the windowsills lining up with your solar plexus rather than your shoulders. Perched in the X5’s comfy thrones, you get expansive views and a true sense of command. Open the familiar two-piece tailgate, with its fold-down lower section, and the hybrid battery steals so little cargo space that you might not notice. There’s 34.2 cubes behind the second row, versus 35.8 for conventional models. The BMW remains a serious family hauler with 72.5 cubes of maximum stowage. The battery does, however, deny buyers the optional third-row seats on other X5’s.

You've got serious hybrid game. Why pretend to be an EV?

But a bit like Toyota’s plug-in Prius, it’s worth wondering why BMW didn’t just cut the cord and make the X5 a conventional hybrid. The BMW is rated for 56 mpge in its battery-only operation. At current fuel prices, the Energy Department figures this X5 will save you $550 a year in fuel versus the gas-only X5 35i, while matching the diesel's $1,550 yearly energy costs. But the mpge rating seems especially generous, and the range is anything but: The EPA estimates the BMW can cover a maximum 14 miles on electricity alone.

It’s hard to fathom a 111-horsepower electric motor, all by its little self, delivering 56 mpg when it’s towing 2.5 tons of SUV. I couldn’t test that theory myself, because the BMW’s battery was unsurprisingly tapped out during its delivery to me. But Car and Driver saw just 21 mpge during the all-electric portion of its test. Oh, and the battery took a painful 22.6 seconds to drag the BMW from 0-60 mph. A Chevy Volt? This is more like the BMW Dolt.

The BMW largely defaults to gas-electric power, but you can toggle up a Max e-Drive setting that sidelines the engine whenever you have enough remaining charge; or a Save Battery mode that reserves the juice for when you want it. BMW claims the X5 can reach 75 mph on electricity alone, but I couldn’t get it above 30 mph without the engine kicking in.

The afterthought status of those all-electric miles shows in BMW’s choice of a 3.5-kilowatt onboard charger, which takes nearly three hours to replenish the small 9.2-kilowatt hour battery on a 240-volt Level 2 charger, or seven hours on household current. The new Chrysler Pacifica plug-in minivan went with a costlier 6.6-kilowatt charger and a much larger 16 KwH battery. The upshot is that the Chrysler can cover a useful 33 miles on electricity alone, and replenish its battery in the time it takes the BMW to add a measly 14 miles of range. In addition to X5’s hybrid price premium, do you really want to spend roughly $1,200 to install BMW's iWallbox home charger, and plug the X5 in for three hours, just to brag about a few all-electric trips to the dry cleaners? Unless you’re the CEO of a green energy startup in Menlo Park, Calif., don’t answer.

That’s a shame, because in every other area—hybrid acceleration, fuel economy, luxury, utility and spirited performance—the X5 demonstrates proof of concept. It’s the damn plug (and price) that raises false hopes, and dashes them before you escape city limits in EV fashion.