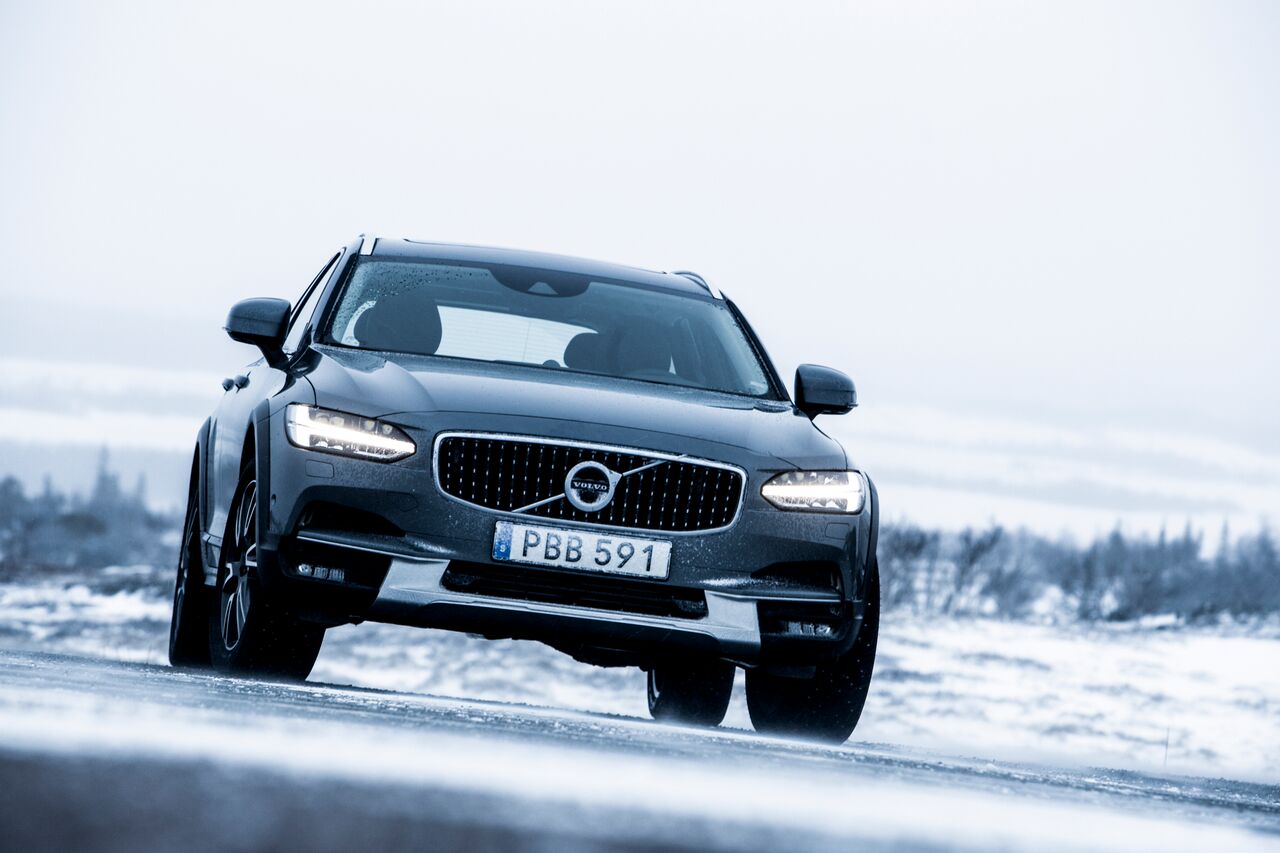 I keep waiting, and waiting, for wagons to become a statement of aesthetic discernment or social status, a way for Americans to separate themselves from the stampeding herd of SUVs.

It’s probably never going to happen, not when taste-making German luxury brands—and now even Jaguar, Bentley, Lamborghini and Alfa Romeo—have reached consensus that SUV’s are what the people really want. When even Volvo fans choose the company’s SUV’s over wagons by roughly eight to one, you know the game is up.

Traditionalists will say “fine”: More wagons for us, as long as manufacturers see enough upside to invest in new models and/or import them to the States. Fleet, seductively styled and foul-weather capable, the Cross Country is the latest addition. It’s a welcome-yet-pricey wagon at $56,295 to start, and marks the 20th anniversary of the Cross Country.

Volvo may have passed from Ford to China’s Geely, but its Scandinavian provenance and mindset still explain a lot about what makes the new Cross Country compelling. Here in northern Sweden, I get a literal taste of that philosophy—elegant simplicity that masks serious engineering—at Fäviken, Chef Magnus Nillson’s acclaimed outpost of New Nordic cuisine, which rose as high as No. 25 on the World’s Best Restaurants list.

The Volvo V90 Cross Country is perfect for locavore foraging

It has an excellent standard AWD, 8.3-inch ground clearance and a 2.3-inch body lift versus a standard V90 wagon. But instead of scouring for lichen, langoustines or lingonberries, I’m hunting slip angles on frozen Lake Andsjön, where we’ve come to drift the Volvo atop 16 inches of ice topped with sheets of watery ice melt that create a few nervous moments: At times, with the sky reflecting off the surface, I swear I’m about to drive the Volvo into open water and sink like a 4,220-pound stone.

As I await my turn to twirl around the course, I have time to survey my lovely, lifted skating partner. Like a Subaru Outback or Audi Allroad, the Cross Country flirts with a crossover design marriage but refuses to fully consummate the deal. And if there were a life drawing class for wagons, this Volvo would be a classic subject, from its wintry Thor’s Hammer headlamps to its bullet-like silhouette and chamfered rear quarters. Compared with a standard V90 wagon, the Cross Country also gets a handsome black-barred grille, revised lower fascias and tasteful plastic cladding around its body and wheel arches, rendered in either contrasting black or body color.

And if you’ve been impressed by the stylish interior of the S90 sedan—as brisk and Swedish-chic as this ski resort town of Äre—be advised that the V90’s cabin lodgings are near-identical. Slabs of optional, near-ebony dark walnut differ from the S90’s lighter “linear walnut” on dash and door panels. (You can also opt for aluminum or flame birch) trim.

The V90’s seats, which achieve Volvo’s usual Platonic ideal of style, comfort and support, get “Pearl stitching” that alternates thicker and thinner stitches. Aside from the wagon’s expanded caboose and tailgate, that sums up the interior changes. Both cars feature the smartphone-style Sensus controller, a central screen that combines generous size and functionality with a decided learning curve, especially when you’re operating it while driving. But Sensus does whip Volvo’s godawful old keypad controller, whose bad déjà vu I experienced in a recent Volvo V60 wagon test. The wagon and sedan also share an identical wheelbase, though the wagon is actually a touch shorter and heavier, the latter due to standard AWD.

You could argue that driving on the world’s largest hockey rink doesn’t tell you anything meaningful about the car, or what it’s like to drive in real life—unless you’re an adolescent in a K-Mart parking lot. And yet it does: An off-road mode maintains a steady flow of power to rear wheels at any speed below 25 mph to encourage forward momentum. And heading into icy autocross curves and slalom runs like a runamok Zamboni, the Volvo’s AWD system immediately diverts up to 100 percent of torque to the rear wheels, allowing me to charge toward the cones like a run-amok Zamboni.

The Volvo V90 on ice

Once I get the hang of it, I tone down the stability control and find it loosens the electronic leash to a welcome degree, allowing me to engage in 90-degree- sideways hijinks without interfering – as long as the car senses that I’m in control and doing it on purpose.

“Volvos used to understeer like crazy, because back then, oversteer was death,” says Stefan Karlsson, the Cross Country’s driving dynamics engineer, who’s watching from the back seat as I pivot his baby around the course. “But now, we’ll never sacrifice at-the-limit handling in evasive maneuvers,” Karlsson says.

I’d already had a more real-world intro to the Cross Country, driving it north from Stockholm’s airport. That model includes the optional, air suspension whose load-leveling ride height is fixed, unlike the adjustable air suspension on Volvo’s XC90 SUV.

I can’t definitively judge the ride—which can get a tad jittery in the S90 sedan—because our V90’s were shod with Nokian-brand tires laced with winter studs. But the wagon may hold some advantage over the sedan with its higher-profile tire sidewalls on 19- of 20-inch rims, a softer tire compound, retuned dampers, springs and anti-roll bars and a touch more wheel travel. On dry pavement, the studs take an evident toll on grip and road noise. But on forested and unplowed Swedish roads, densely layered with snow, ice and gravelly stuff, the studded tires let me power through curves at impressive speeds with no white-knuckling whatsoever.

Volvo is sticking to its pledge of four cylinders or nothing

Available only in confusingly named “T6” powertrain trim for America, the Cross Country’s 2.0-liter four-cylinder combines a supercharger and turbocharger to deliver 316 horsepower and 295 pound-feeet of torque – and ideally some amnesia on the lack of a V6, or even Volvo’s old five-cylinder engines. The four-cylinder pulls hard and sounds pretty legit under hard throttle, though not as butter-churned as a quality six. Paired with a solid eight-speed automatic transmission, the Cross Country fires to 60 mph in a fleet 5.6 seconds.  The Volvo matches the 25 combined mpg of the Audi Allroad Quattro; and its 22/30 mpg in city and highway easily surpasses the 20/55 mpg of its beefier cousin, the XC90 T6 Inscription.

A few S90 flaws are still aboard, especially steering that can feel artificially heavy. (This is one car that feels best with adjustable steering set to its “Comfort” mode). Just off center especially, the Volvo’s steering thickens unnecessarily, calling attention to itself when you’re just trying to change lanes or ease into a curve. But all told, the Cross Country is a smoothie, the kind of car that dashes off hundreds of effortless miles without taxing its pilot or passengers.

The only mental distress may come when you’re at the tailgate, rather than in the driver’s seat. As much as I love them, let’s debunk one popular defense of wagons: People love to claim that they hold as much stuff as an SUV, but it’s just not so. As with many modern wagons, the Volvo’s sloping roof and dramatically forward-slanting hatch glass are designed to flatter the eye, not your sense of practicality. Fold its second- and third-row seats, and Volvo’s cavernous XC90 can hold 33 percent more total gear than the Cross Country, at about 85 cubic feet versus 53.7. The Cross Country’s modest 19.7 cubic-feet of storage behind its second row is more than doubled by the XC90’s 41.8 cubes. The SUV not only carries more total volume, but can manage taller, bulkier items that can’t fit through a wagon’s smaller hatch opening. Sure, the SUV buyer may not use its full capacity all that often, but that’s another question.

So the XC90 takes the cargo title, and holds seven passengers to the V90’s five, but the rest of the ledger tips the Cross Country’s way. On Lake Andsjön, the Cross Country feels lighter, more agile and car-like than its more-popular SUV cousin. Yet the wagon’s deceptively generous ground clearance trails the much-taller XC90 by just 1.1 inches.

The Cross Country blazes a trail into showrooms in March at $56,295 to start. That’s about $2,000 less than an XC90 T6. It’s about 10 grand more than the Audi Allroad, though the Volvo offers vastly more standard equipment. Still, bargain hunters take note: Volvo will offer a standard V90 wagon by special order only, including a more-affordable T5 version with front-wheel-drive and a turbo four with 250 horsepower. For wagon fans who want a lower price and lower ride height, or have no need for AWD, the V90 should be a smart buy.

For either model, don’t hold your breath for a 400-horsepower T8 plug-in hybrid version, because the American sales numbers just don’t add up. Volvo will be happy to sell 4,000 Cross Countries a year here, and perhaps another 1,000 V90’s, compared with maybe 32,000 XC90's. In other words, only about 1 in every 4,250 American new-car buyers will drive home in a Cross Country.

Are you one of the few, the proud, the wagon-brave? Then by all means, cross-shop a Cross Country against SUV's -- and to paraphrase Lennon’s resistance anthem, give Swedes a chance.

Lawrence Ulrich, The Drive’s chief auto critic, is an award-winning auto journalist and former chief auto critic for The New York Times and Detroit Free Press. The Detroit native and Brooklyn gentrifier owns a troubled ’93 Mazda RX-7 R1, but may want to give it a good home. Follow him at @lawrenceulrich.