If only they weren't so DIRTY. 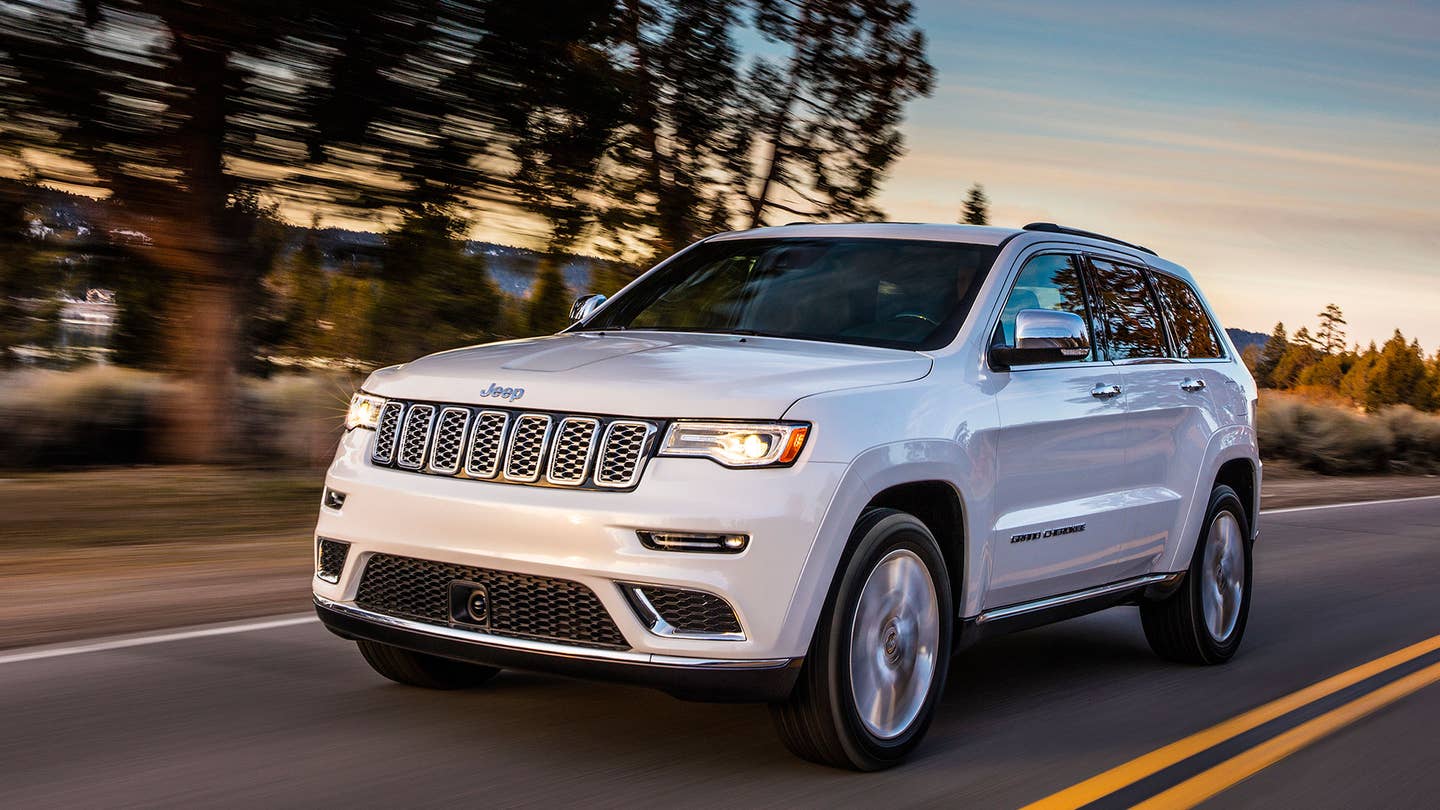 WHAT THE HELL IS IT? It’s the Lexus of Jeep Grand Cherokees.

WHO IS IT FOR? Whoever’s fourth-in-command at a hedge fund in Sun Valley, Idaho.

WHERE DID WE TEST IT? Highway, city, airport run.

THE FIRST THING YOU NOTICE IS: Whoa. The leather. SO MUCH WHITE LEATHER.

THING THEY DON’T WANT YOU TO NOTICE, BUT YOU DO ANYWAY: The Grand Cherokee hasn’t gotten a significant redesign since 2010. Cargo space is only average. Jeeps shouldn’t have so much stainy, white leather.

CAR IS GOOD AT: Being tougher and more off-road capable than a Lexus RX. Keeping well-heeled buyers from fleeing Jeep dealerships before the larger, tonier Grand Wagoneer shows up for 2019.

CAR IS BAD AT: Hiding its Jeepness behind a luxurious facade.

WOULD YOU BUY IT? No doubt, the Jeep Grand Cherokee is one of the best do-it-all SUVs on the market: Bank-vault solid, pleasingly damped over craggy, northeastern highways and, if solicited, able to follow an old railroad grade up a Rocky Mountain pass. It sets the standard for merging capability and refinement in a compact, usable package.

And yet, true luxury has never been in the Grand Cherokee’s vocabulary. These days, the business pressure to expand the scope of a strong brand often runs afoul of the brand’s core values. It’s the reason Dunkin’ Donuts serves tuna fish sandwiches, and it’s why Jeep has had to extend into the luxury-SUV space, even as its sales continue to grow at the opposite end of the market.

On one hand, it’s a good problem that Jeep buyers are running out of things to spend their money on before they run out of love for the brand. On the other, if a luxury Jeep product is mushily off-message, the company risks alienating the hardcore Jeep guys and eroding the name. With the Summit package, Jeep is riding perilously close to that line.

With acres of sumptuous leather, a smooth eight-speed automatic that irons out the Hemi V8’s raucous tendencies, and a lovely ride that doesn’t spare truck-like heft in favor of carlike handling, the Grand Cherokee is a platform on which to add a few posh bits. Its biggest drawback in the luxury space is that it's still a two-row SUV. (The new Wagoneer, however, should have three rows of seats.)

Still, while the Jeep Cherokee Summit is a solid contender, I’d be afraid to get its delicately-hewn insides dirty. Too much Jeep luxury, thy name is quilted, Natura leather and open-pore wood trim. I’ll keep the dual-pane sunroof, FCA's best-in-class Uconnect infotainment system, and Harmon Kardon sound, however. I’m not a savage.

DEEP THOUGHTS: Jeep has credibility in the luxury space. In the 1960s, Jeep execs spotted the first puffs of the “gentleman’s Jeep” revolution; by the 1980s, their top-of-the-line Wagoneer, with its leather-rich interior and folksy wood exterior, had become well-heeled Americans’ own heartland-Rover. By the 1990s, though, they’d abandoned high luxury for capable usability, even while its competitors made bank on Ritz Carlton-class carriers.

Turns out, the full-sized luxury truck market was as volatile as the Grand Cherokee market was reliable. While others foundered, Jeep was selling scores of the smaller, more economical, and more car-like Grand Cherokee; the company has sold around 200,000 Grand Cherokees a year, on average, since 1993, even during the late-Aughts downturn that sent the full-sized-SUV market over a cliff.

But as the economy recovered, and Jeep’s volumes grew across the board, Jeep dealers were forced to sit on their hands while big-ticket buyers—who would have stuck with the Jeep brand if only they had a more upmarket offering—absconded for the Range Rover dealership.

Leaving cash on the table isn’t an option for Jeep's current owner, Fiat Chrysler Automobiles, and so while the company is working on a new, full-size Jeep Grand Wagoner—with three rows of seats, more leather than a catcher’s mitt factory, and a plus-sized price tag to match—the new, top-spec Grand Cherokee Summit serves as the flagship Jeep.

Our Grand Cherokee tester had the 4x4 Summit package, which starts at $53,495. Options boxes had been ticked for the 5.7-liter Hemi V8 (with ZF eight-speed automatic), adding $3,795, and premium quilted leather, for an eye-popping $4,995. The California Package added 20-Inch platinum aluminum Wheels, body-color plastic and side-view surrounds, platinum-finish sills, and moldings. With sumptuous white leather on the inside, with a frosty white finish on the exterior, this spec might have been called the Abominable Snowman And Fitch edition. I was half expecting to see a spokesmodel for breath mints in the right seat.