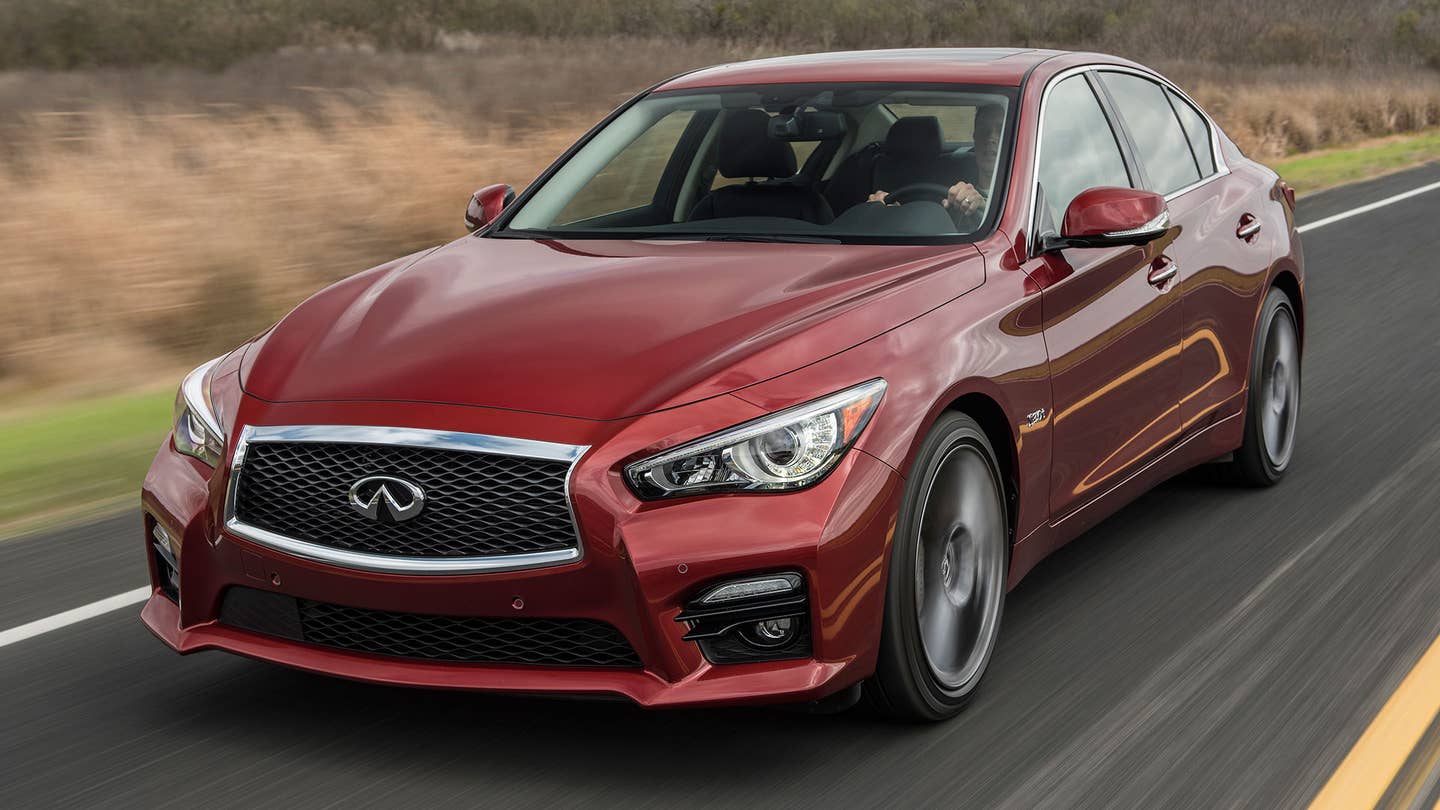 WHAT THE HELL IS IT? Infiniti’s long-awaited attempt to boost the performance cred of the G37—er, the Q50.

WHO IS IT FOR? Japanese car fanboys who always secretly wanted an Audi S4.

WHERE DID WE TEST IT? The interstates, parkways, and B-roads of northern New Jersey and southern New York.

THE FIRST THING YOU NOTICE IS: The Dynamic Sunstone Red paint, at least on my tester. It’s so vivid and unusual, I had to check the window sticker to see if Infiniti slaps it on every Red Sport as part of the package. (The company doesn’t, but the $800 paint is a Red Sport exclusive.)

If it’s any other color, the first thing you notice is...how much it looks like any other Q50. It’s beyond understated, even compared with the restrained competition (Mercedes-AMG C43, BMW 340i M Sport, Jaguar XE S, etc.). Which is odd, considering how aggressive the base Q50 is for a middleweight luxury sedan.

THING THEY DON’T WANT YOU TO NOTICE, BUT YOU DO ANYWAY: The turbo lag. Once the snails spool up, the Red Sport pulls hard, but the engine is a dog below roughly 2,000 rpm. The engine is Infiniti’s first turbo V6, and it’s clear the company has some catching up to do in the forced-induction game before it can catch up to the likes of BMW and Benz.

CAR IS GOOD AT: Passing cars already doing extra-legal velocities on the highway.

CAR IS BAD AT: Telling the driver about the road through the steering wheel. Steer-by-wire means there’s zero physical connection between the wheel and the pavement, which means there’s about as much communication between your fingertips and tires as there is between MSNBC and Breitbart News.

WOULD YOU BUY IT? Not if I were looking for a genuine sport sedan. The Red Sport has all the power it needs to dance with the greats, but power alone does not a sport sedan make.

I climbed into the Q50 Red Sport excited, and I climbed out disappointed. Maybe that was in part my fault; I expected a car that was at least a game attempt at a genuine S4 or C43 competitor. But the Infiniti’s handling was a letdown. Any attempt to push the car in the turns resulted in a hot cup of understeer with a side of tire squeal, even with the drive mode dialed up to Sport+ and the traction control disabled. Worse, the steer-by-wire system left me feeling so disconnected from the car, I started getting motion sickness on some of the switchbacks—something that’s only happened to me in the past when I’m riding shotgun.

It comports itself better in the twisties when driving at 7/10th or below, but even then, there’s no joy in it. The seats lack enough bolstering, the transmission takes its sweet time shifting in manual mode, the redline is hard to spot on the tachometer.

Likewise, the exhaust note is flat, even asthmatic. Even calling it “industrial” would be too kind; it sounds like a vacuum cleaner. I found myself short-shifting in manual mode just to banish the noise. The old VQ Nissan/Infiniti V6 made such boisterous music; it’s sad to see that sound lost to the era of downsizing and turbocharging.

The car’s more well-suited to high-speed highway hauls than B-road blasts. On the interstate, the engine runs hot enough to keep the boost within spitting distance; 60 becomes 80 and 80 becomes 100 with ease.

As with most new Infinitis, the interior is a delight. The seats are supple and comfortable, the trim elegant, the electronics clear and easy to use. The dual-screen layout seems a little overcomplicated at first, but it doesn’t take long to acclimate to it—and it doubles the amount of screen space, letting you monitor traffic using the nav on the top screen while still being able to see who’s playing on the radio on the lower. (That said, the juxtaposition between the high-definition lower screen and the 10-year-old upper one is a little odd.)

Bottom line: The Q50 Red Sport isn’t a sport sedan; it’s a luxury sedan with extra power. If that’s what you’re looking for, however, you won’t be disappointed.