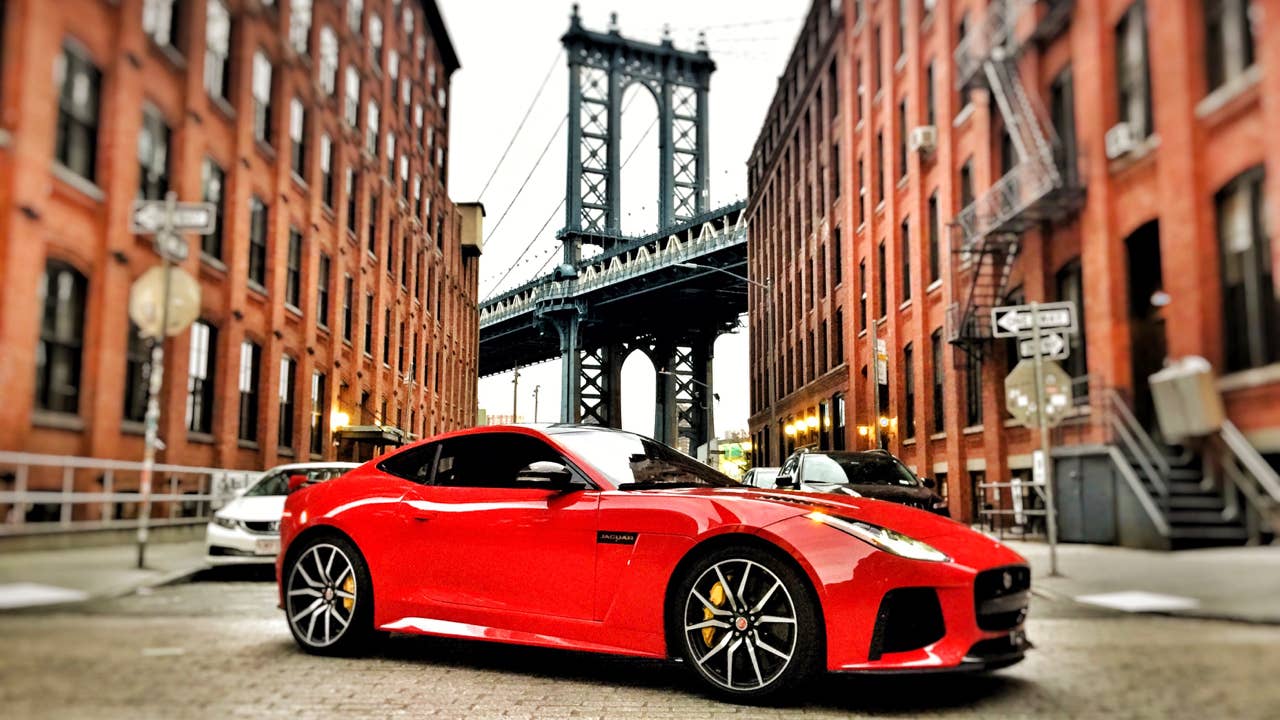 Like the Russian submarine in The Hunt For Red October, the 2017 Jaguar F-Type SVR is a car built for one purpose. I’m not talking about tunnel sprints, which is how Jaguar launched it earlier this year. I’m talking about the ultimate road test. Have you seen Rendezvous? If you have to ask, stop and watch it now.

Everyone else knows exactly what I’m talking about.

[Editor's note: Jaguar wanted me to drive the F-Type SVR so badly that I wasn’t invited on its initial launch, nor to the Laguna Seca track day at Monterey Car Week. They did, however, buy me one delicious dinner at Carmel’s Baja Cantina, and deliver the SVR to me in Manhattan, along with seven days use and a tank of gas.]

Now that we’re on the same page, what is the F-Type SVR? It’s the top of the line F-Type in a range starting at just over $60,000, and topping out with the nearly $150,000 example generously (and unbelievably) lent to me—no questions asked. There was one stipulation: that I wouldn’t put more than 500 miles on it.

Translation: Alex Roy, you are forbidden to drive our car cross-country.

Cross-country—non-stop except for gas—is the ultimate road test. Trust me, from the moment I laid eyes on it, cross-country was not my plan. A 200 mph Jaguar with 567 horsepower, all-wheel drive, two seats and minimal interior storage space? How about that supercharged 5-liter V8? Or that EPA highway rating of 23 mpg? I got 12. A Cannonball record-breaking cruiser this is not. Throw in the loudest exhaust ever installed on an English car—and that’s even on its standard, “quieter” setting—and you won’t want to take long rides in this one. Nine hours round-trip to Watkins Glen and back, with a few hours on-track? That’s better than 29 hours cross-country, but I wasn’t really interested in the trackday Jaguar offered with the car.

My plan was to grab this kitty by the kitty. I wanted to know what she could do in nine minutes—approximately the length of the original Rendezvous across Paris—on a route from lower Manhattan to Brooklyn, for no reason other than . . . I had no good reason. But I had the keys.

Sexy, but if you want a modern E-type, this is not that. No matter. The SVR turns more heads in New York City than a Porsche 911 or Nissan GT-R, about as many as an Audi R8, but not as many as a Mercedes-Benz AMG-GT. If you buy cars to attract women, this is the best of the lot, but not as good as a Land Rover Defender or Morgan 3-wheeler. If you buy cars to attract men, any of them will do.

Is it as timeless as an E-type, the definitive English coupe of the sixties? No, but it has presence. Call it . . . formidable. It looks like what would happen if an 11th grader doodled on the F-Type R, which is truly perfect in balancing Jaguar’s design language with aero. I generally object to wings, inlets and vents, at least on a street car. The last car with a wing that was sexy was the Countach. It was also the first one—and it was accidental. Don’t take my word for it. Ask any woman in your life, even if it’s your mother. Something tells me that if Jaguar’s current comeback continues, something more like the E-type will return. Will it be an evolved F-type? Long and lower? If not, let’s hope it’s sexier than the now-discontinued XK, which did nothing for me, or anyone else.

The SVR’s carbon fiber roof saves weight, but it also reduces the perceived sense of interior space. From the interior, I’d prefer a convertible, or at the very least the panoramic roof, which is a $3,200 option. From the exterior, the SVR should only be had in the hard top, for with every step taken toward the rear of the car, my God, is she gorgeous. Not quite Aston Martin Vanquish gorgeous, but close.

The interior is also wonderful, but snug. The dash is gorgeous. Materials are excellent, but it doesn’t have the gloss and precision of the AMG-GT’s, which is stunning in almost any color combination. The black on black interior was a little dour in daylight, livened up only by red stitching.

The SVR—like the R8, 911 and AMG-GT—will speak directly to some enthusiasts, and not others. Is it gorgeous? Like obscenity, you know it when you see it. My friends, my super, the doormen, garage manager, mom, current girlfriend and three exes were split between like and love. That's better than what they said about the far more polarizing R8 or AMG-GT. I would go for the cheaper, less obvious F-Type R and save the rest for my gas budget, which will also be formidable.

Driver aids? Automatic emergency braking or radar cruise control? No and no. The first would have been nice, given the power. The second? I love it for long drives to Lime Rock and Watkins Glen. Good thing I stayed in the city. Autonomy? Safety? Please. This is a car fully in your hands.

As for the infotainment system, the user interface, screen resolution and speed are an insult. For $150k, it better look, feel and work as quickly as Google Maps with an LTE connection. Also, 1994 wants its backup camera font back. Seriously, Jaguar, I expect better.

The Meridian audio system? I used to sell high-end home audio, and a ton of Meridian. This is an incredible system—in almost any other Jaguar or Land Rover. I think it ties with Revel for best system in an internal combustion car.

That amazing Meridian system’s problem is the SVR itself, whose acoustics are so iffy and noise levels so high that the amplifiers are constantly fighting to move too much air at too fast a speed against too much opposition. No internal combustion car—especially the SVR — can resolve this in terms of midrange and treble clarity, but there is a solution for the boomy bass.

Voila! Meridian problem mostly solved. Unless you’re parked, engine off, in which case leave the bass at the defalt setting and the system will support a thirty foot diameter dance floor. Seventy-five in an enclosed garage.

SVR stands for Special Vehicle something or other, which is Jaguar’s in-house AMG/M/S division. Does anyone who can afford such cars really care about the specs? I’m not sure most “shoppers” even need them. Sports cars are faster than GTs, coupes than convertibles. Rear or all wheel-drive? Manual or automatic? In this day and age, you know what most people are choosing, alas.

Here are some pictures of that performance in action:

The performance was . . . perfect for my purpose.

For those who must know, I’ll share as little as I think is truly relevant. Horsepower? Acceleration? Yes and yes, or 567 horses and zero-to-naught in 3.5. Grip? Enormous, but you’re going to regret those 20’s in lower Manhattan. Brakes? Stock is excellent. Ceramics are $12,000. Your life, your call. I vote ceramic. Exhaust note? Standard is abso-barking-lutely, and an utterly gratuitous Conversation-Stopping mode is a button away. Best thing ever in the Battery Park Tunnel. Fuel economy? Not so much. The details are irrelevant, really. Chris Harris loved the “lesser” F-Type R. The SVR is the Kickboxer 2 of Jags. It’s a lot like Kickboxer 1, just with more kicking. More is more, but not necessarily better.

If you can afford this, absolute performance isn’t the point, because this thing is bursting with...

A recent panel on autonomy discussed the idea that Self-Driving Cars would have personalities, citing Iron Man’s J.A.R.V.I.S. as something to look forward to, albeit on wheels. If that’s your idea of a car with personality, you know nothing about cars, and you’ve certainly never driven a car like the F-Type SVR.

England spits, pulses and roars from the SVR’s every pore, in the same way Germany hums and whines from even the cheapest variants of the 911 and AMG-GT, Italy howls through the 488, and ‘Murica erupts from the rear end of a GT350R at the turn of a key.

Personality? The best cars have had personalities for over a hundred years, and Jaguar’s recent renaissance is a tribute to their return to the spirit of the E-Type. March up and down Jaguar’s current lineup and for the first time ever England is putting its best automotive foot forward, with cars honoring the past while planted in the present, their new design language distinctly modern yet still English, their (presumed) reliability finally backed by a 5-year/60,000 mile warranty.

For the record, there’s a reason my Morgan—the last old school English car brand—only has a one year warranty.

The F-Type in any iteration is a terrific example of the chasm between people who see cars as transportation and those who see them as transformation. No one in the transportation crowd is reading this. They want Self-Driving Cars. The transformation crowd is you, me, and everyone who understands the potential relationship between a driver and a machine. Pick your metaphor: a car as glove, suit, dance partner, weapon, whatever.

You get in, and you are transformed. By how you see yourself, how others see you, and by what you can do with the car. Transportation is never more than a basket. Transformation is as great as you make it.

The SVR is a superbly transformative sports car, a worthy representative of an era when we still have a choice over how we get from A to B. Do you hate the idea of Self-Driving Cars? What about electric cars? If you answered yes to one or both, the SVR is one of several cars perfect for you. The SVR—like the Ford GT, R8, 911, AMG-GT and every Ferrari and Lamborghini ever made—is a car no one needs yet everyone should want, a car with no concessions to what's coming, with no software to hide behind. All consequences are yours. As the future births itself in a bukkake [ED. NOTE: Goddamn it, Alex] of green tech and autonomy, the SVR is a bloody throwing star in the face of "progress." As long as there are cars like the SVR, ubiquitous, government-mandated Self-Driving Cars will remain that much further away. Trust me, any kids who hear this thing coming will want one, and you’re not going to be able to stuff them into a pod car.

I’m still one of those kids.

Would I buy one? As a hedge against a beige future, absolutely. This will be a collectible. For your grandkids. Or great grandkids. The profligacy! In the crowd of now? I wouldn't buy it, or any of its competitors. I like my Morgan. I like not knowing if my car will make it. These new English cars? Too reliable.

Oh yeah. The SVR was perfect for my Rendezvous in New York. The details?

You’ll have to wait a year.