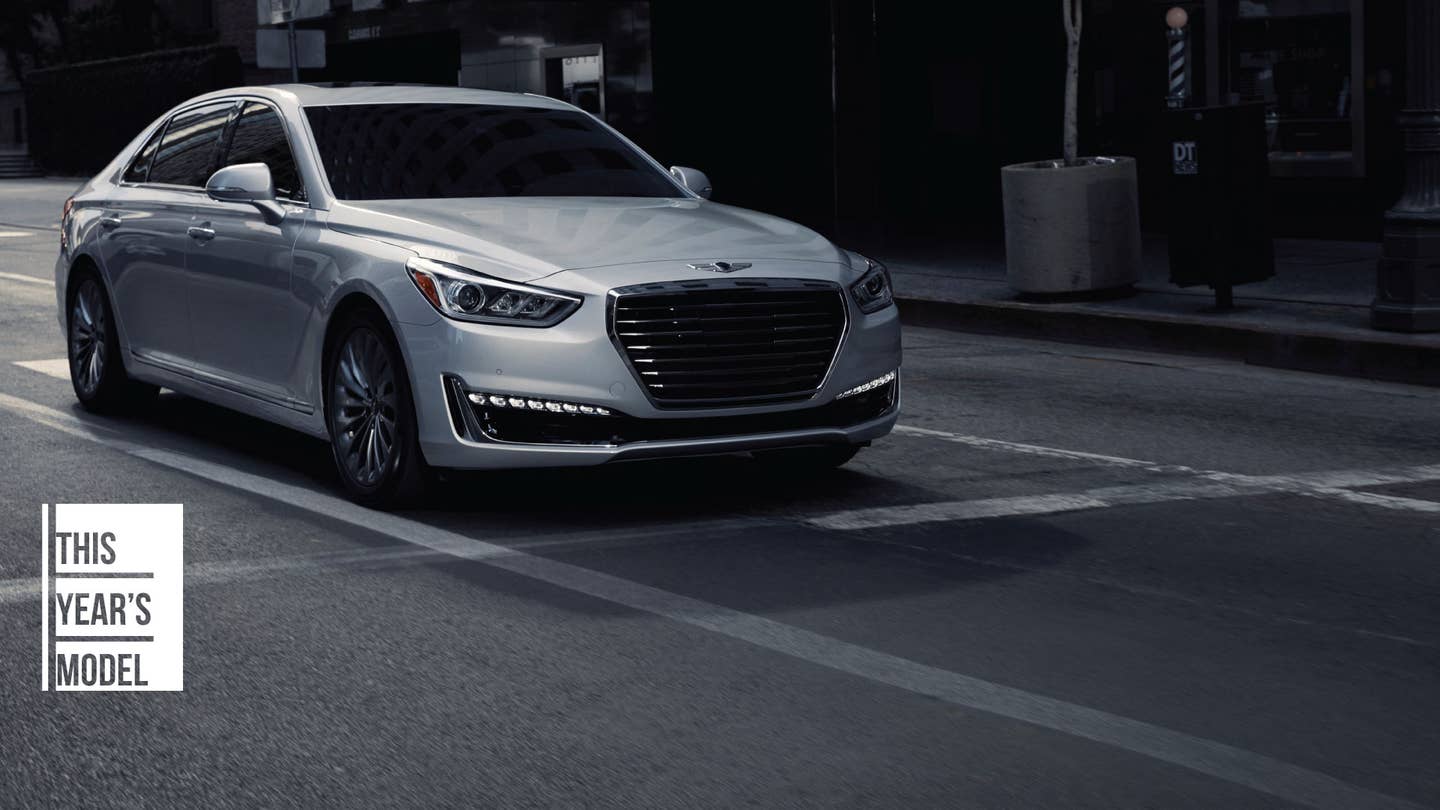 Oh, Hyundai. I remember when you were this big. With your gurgling baby motors and silly body rattles, helpless but hardly adorable. Remember how you kept dirtying your disposable diapers—Excel, I think they called them—until the American neighbors ran screaming from the stench? Ha, yes, we can all laugh about it now.

Even when your peers, like that cheater Volkswagen, bullied you, I knew you had a future if you just stuck to the mantra of your mentors: Good values, fine qualities. Even Auntie Toyota would be proud. And now look at you! So smart, so successful, even the critics had to admit they were wrong. And look where Herr Volkswagen is now, that little German prick; he’s probably pumping diesel at some truck stop, while you outsell him by better than two to one in the U.S., with 761,710 feathers in your cap in 2015.

But even I couldn’t have foreseen your ambition. A luxury brand, you say? "Genesis" has a nice ring to it, very biblical. And you’ve inspired a whole family, with six Genesis models coming to the showroom table by 2020. Now get out there, bubula, and beat their brains out.

Of course, Hyundai doesn’t actually have a doting mother. But the figurative babe has come of age, kicking ass and spawning offspring—namely, the new stand-alone Genesis brand. The first-generation, Hyundai-branded Genesis models were mostly dreadful, Chinatown Rolexes in a world of true luxury vehicles. The blubbery Equus, especially, was so hermetically styled and dated that it might have hailed from North Korea rather than South.

Then came the second-gen Hyundai Genesis sedan, surely the industry’s biggest surprise for 2015—and not only for its lavish features at a sub-$40,000 starting price. That stuff, we’d come to expect; rather, the midsize Genesis suddenly looked and drove like a real luxury car. And its sophisticated, Lotus-tuned suspension stopped any remaining snickers over Hyundai’s luxury ambitions.

Under the new stand-alone brand strategy, that car is henceforth known as the Genesis G80. On its polished heels comes this Genesis G90. Like the Equus it replaces, the G90 is cast as a budget alternative to a Lexus LS (mainly), Mercedes S-Class, and other European flagships. And while the Genesis remains a David among full-size Goliaths, this time it’s carrying a bigger sling and more ammo.

Weaponry includes a 3.3-liter, twin-turbo V6 that crushes the older, 311-hp 3.8-liter in the G80. The all-new engine spools up an impressively stealthy 365 horsepower and 376 pound-feet of torque, mated to a smooth but occasionally dithering eight-speed automatic transmission. That G90 3.3T Premium starts from $69,050 in rear-drive trim. Bragging rights jump with Hyundai’s 5.0-liter V8 with 420 horses and 383 pound-feet. At $70,650, that 5.0 Ultimate model adds just $1,600 to the price; sounds like the V8 deal of the century to me. For either model, toss in another $2,500 for AWD, including a Sport mode that hogs 90 percent of power for rear wheels, and 100 percent in a fuel-saving Economy mode. To keep northerners interested, the system can shoot 40 percent of torque to front wheels in dicey conditions.

Genesis claims the G90’s body structure is lighter and slightly more torsionally rigid than the Mercedes S-Class, and a padded cell’s worth of sound deadening makes the G90 positively funereal inside. Some guy named Hemholtz is credited for inspiring the two-piece alloy wheels whose hollow section acts as as resonator, not only absorbing tire noise but reducing critical unsprung weight by seven pounds at each wheel. The G90 is also Mercedes-massive at nearly 205 inches in length, riding a 4.5-inch longer wheelbase than the Equus. The upshot is nearly 46 inches of limo-like rear legroom, fully a half-foot more than a Cadillac CT6.

Genesis has made much of another service: A valet will fetch your G90 from a pre-appointed location, drop off a loaner and then return the car when service is complete. Sure, there might be an ulterior motive, ensuring that owners won’t have to share a Mr. Coffee—pass the powdered creamer, please—at a prosaic Hyundai dealership with coach-flying Elantra and Sonata types. But it’s still a service that a Rolls-Royce owner might appreciate, so who cares either way?

Pampering continues inside, including a fold-down rear console that bristles with audio and other controls. One button scooches the front passenger seat forward to max out the already enormous legroom—and without shelling out for an optional, Lexus- or BMW-style “executive package.” And where Mercedes, Audi, and everyone else charge stiff fees for their latest-and-greatest safety features, they’re all standard on the G90. That's 11 features in all, including automated emergency braking with pedestrian detection, lane keeping assist, rear cross-traffic alerts, and a drowsy-driver alert.

The rotary control knob for the crisp, 12.3-inch display screen may be set a bit too rearward for long-armed drivers. But the system is straightforward enough to avoid any peek at the owner’s manual, aside from setting and toggling to radio presets, which proved a pain in the ass.

Since this is the first chapter of Genesis, one can hardly blame Hyundai for a lack of luxury brand cachet. The lack of design character is another matter. Interior materials and craftsmanship, aside from a few Hyundai parts-bin switches, seem fully deserving of the $70,000 price tag. But there’s just no art here, from the obligatory slabs of cabin wood to the slim-wristed steering wheel. The G90 seems less the work of designers than draftsmen, who dutifully applied micrometers to the layouts and themes of other cars. Where was Peter Schreyer, the talented former Audi designer who leads styling at Hyundai, Kia, and now Genesis, when this car was taking shape?

The exterior design blows away the old Equus, yet it’s also cautious and derivative: An Audi-style freight train grille, trendy coupe roofline, Mercedes flanks and taillamps, a Lexus-loving rear deck. With so many schools represented, the Genesis could have used a Harry Potter sorting hat to choose its true character and destiny. The Genesis at least has the grace to locate its strip of LED daytime running lights on the lower fascia, instead of on the headlamps, as Audi does.

Aesthetic grousing aside, the G90 plays the luxury game right. Like the smaller G80, the G90 isn’t at all sporty in the manner of a Jaguar XJ or BMW 7-Series. Yet it comports itself like a true professional, a quiet-mannered, soft-bellied slugger of the Lexus league.

The 365-hp V6 gets to work early, achieving peak torque by a claimed 1,300 rpm, but runs out of steam quickly above 5,000 rpm. Yet the twin-turbo manages a reasonable V8 impression, shoving the Genesis to 60 mph in roughly 5.7 seconds, a touch of engine noise piped in via the audio system. Some schooner roll into turns is expected, considering the adaptive suspension’s comfy tuning and a nearly 4,800-pound curb weight. Yet the Genesis never feels oafish or overwhelmed. Pushing harder does reveal limits and limitations versus athletic rivals; on a makeshift skidpad, with traction control shut down, the conservative rubber squealed prematurely, and the G90 plowed into the safe, dull understeer of a typical large sedan. And like too many driver-selectable performance systems, the four-mode Intelligent Drive needs to smarten up and effect more useful, perceptible changes. In Sport mode, throttle response becomes a skosh livelier, but the steering effort turns annoyingly leaden, as it does on most every Hyundai with an adjustable helm.

So where does the Genesis slip into the flagship sedan stream? Even with six cylinders aboard, the Audi A8 and BMW 7-Series cost $10,000 more than Hyundai’s priciest AWD V8, and a good $25,000 extra when comparably equipped. The Lexus LS 460L starts at $89,000. Mercedes’ S-Class is the standard bearer and runaway sales leader, but it also starts above $97,000.

For me, the G90's most direct, formidable competitor may be Cadillac’s CT6. The Caddy isn’t efficiently packaged, just an inch shorter overall than the Genesis but with that half-foot handicap in rear legroom. But the Cadillac brings design and performance character in spades, and that’s the G90’s weakest pair. The CT6 also starts around $55,000, albeit with a turbo four-banger. But it can be had with its own twin-turbo, 420-horsepower V6 for a price on par with the Genesis, or just over $80,000 in loaded Platinum trim. Interestingly, Cadillac is over a century old, Genesis just coming into being, yet both are underdogs in this class.

However that battle plays out, Genesis’ take is that luxury is neither rocket science nor requires a NASA budget. This Genesis isn’t a moon shot, but it is good enough to put the G90 into low luxury orbit with the stars of the class.