The Mercedes S550 Cabriolet Is the Ultimate Yacht Rocker

Mercedes and Michael McDonald agree: Yah Mo Be There. 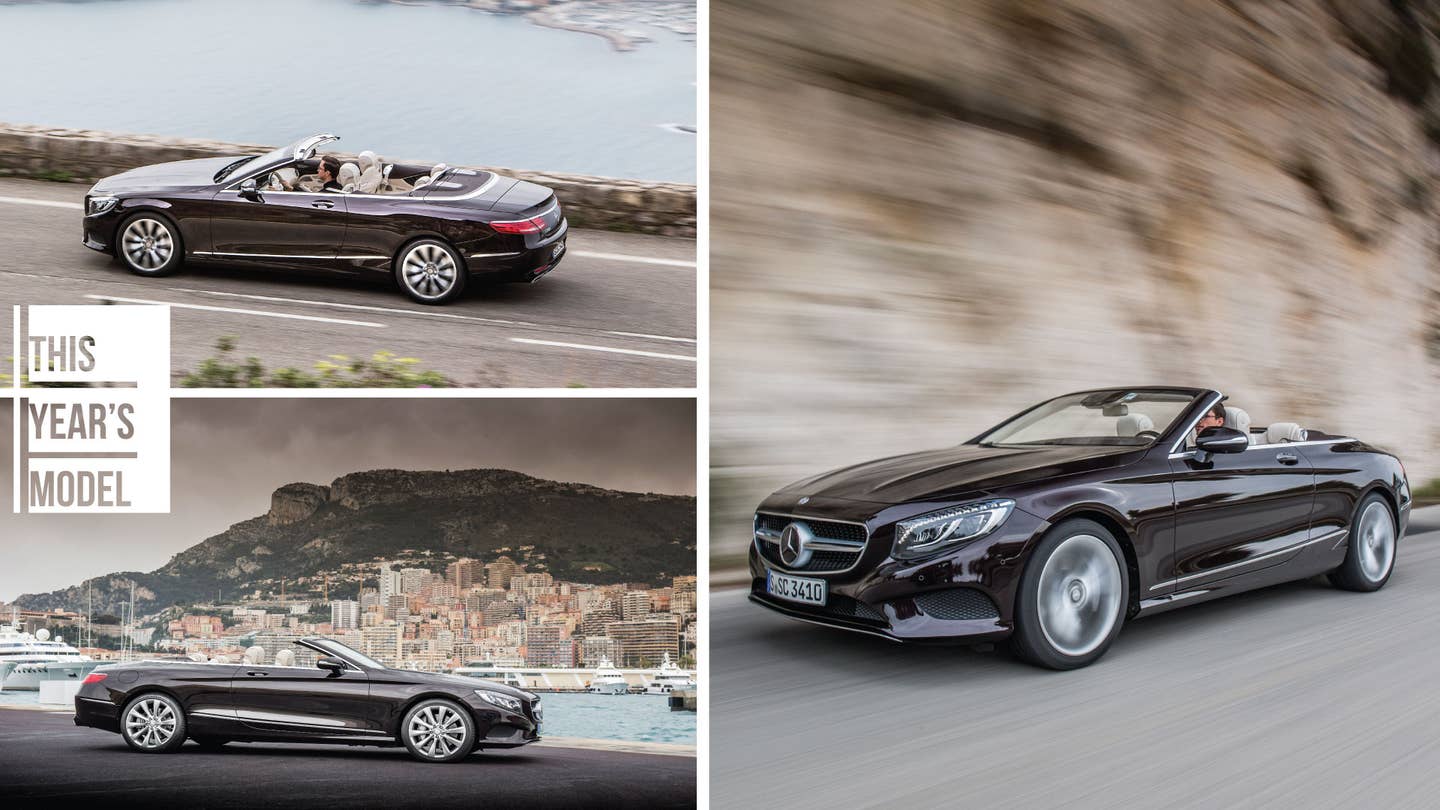 I’ll blame the heat. With the Hamptons summer season in full swing, we at The Drive found ourselves debating, a bit too strenuously, which artists and songs are truly categorizable as "Yacht Rock," that notorious, semi-ironic category of '70s soft rock, as silky and windblown as a summer scarf—and as much a guilty pleasure.

Arguments then broke out over apparent no-brainers like Steely Dan and the Doobie Brothers. And in case you thought we misplaced the car review, that’s where the Mercedes S-Class Cabriolet comes in.

It became clear that early, spikier Steely Dan, or the rockin’, Tom Johnston-fronted Doobies of “China Grove” must be denied passage on this musical Titanic. The tiebreaker, it turns out, is the hirsute crooner Michael McDonald of “The Forty Year Old Virgin” fame. McDonald’s inimitable warm-bath baritone softened Steely Dan en route to its monster “Aja”—which took a Grammy for Best Engineered Album—before he hijacked the Doobie Brothers in ’76. A temperate stream of Doobies hits followed, perhaps capped by McDonald's admittedly brilliant “What a Fool Believes,” co-written with Kenny Loggins.

So that’s it. The key Yacht Rock criterion, aside from feathered tresses and pre-hipster facial hair, is smoothness, all friction and frisson removed, every nick scrubbed until the surface gleams. A streamlined harmonic vessel that masks the pile of money, studio design, and state-of-the-art engineering that went into it. Ladies and gentlemen, give it up for the Mercedes S550 Cabriolet.

This flagship convertible drops its top faster than a supermodel sunning in Cannes. And despite acres of exposure, and the need to buttress that four-passenger cockpit, Mercedes's first convertible flagship since 1971 drives almost as splendidly as its hardtop cousin, the S-Class Coupe. The Cabrio glides over pavement waves and smothers occupants in luxury, yet avoids any sense that it’s a mere dockside party barge.

Stretching to nearly 199 inches, the Mercedes is a big ‘un, roughly eight inches longer than a BMW 6-Series or Bentley Continental GT Convertible, and only about 10 inches shorter than a Rolls-Royce Dawn. Catch it top-up from its least-flattering rear angle, as I did in Pebble Beach during the Concours weekend, and the Cabriolet’s broad flanks and high waterline can recall an old Toyota Camry Solara. But from most angles, the Benz makes a lovely, stunning statement of leisure and privilege—a look aided by a $5,900 AMG Sport body package that includes a diamond-pattern grille and mirror-finished lower fascias. Ruby Black Metallic paint appeared black, tobacco brown, or wine-purple depending on the light and time of day. Throw in a taut-fitting maroon fabric roof, its interior lined in soft Alcantara, and my test Mercedes resembled the world’s biggest bottle of Bordeaux.

The superyacht effect is heightened by an interior that, as in every S-Class, actually exceeds what you expect in this price range, here starting from $132,325. The wraparound cockpit seems almost swollen with luxury, from the banquette-like dashboard to conjoined, 12.2-inch high-resolution display screens. Six basic interior color schemes are available, including a dramatic white, or red. My uprated Designo cabin featured $3,250 worth of saddle-and-black leather. Mercedes' “Flowing Lines” black wood, also available on the new E-Class, recalls the lanes of an Olympic track, its stripes of embedded metal racing around the dash and doors and repeating in the rear. Gleaming laser-cut Burmester speaker grilles include a huge pair on the rear tonneau cover, exposed to sky when the roof is stowed, and exactly where the teak decking goes on a Rolls Phantom Drophead Coupé. I'd avoid letting rain pour into those.

Leather-swaddled armrests and the platter-sized center console are optionally heated, along with all four seats and a lustrous, flat-bottomed steering wheel. But the S-Class' optional Swarovski crystal bits, including one on the sliding cupholder lid, still look like cheap stick-on appliques for My Little Pony.

Crossing the Brooklyn Bridge on my escape from New York, I lowered the Mercedes roof, which operates at speeds up to 37 mph. To really piss people off, the top also operates via key fob, as you stride away, purposefully, to your meeting at Goldman Sachs. Mercedes’ Aircap wind deflector rises from the windshield header, while climate-controlled air blows from front Airscarf headrests. Cute little fans twirl in the aft side of those headrests will cool or warm faces in back. Coincidentally, the Mercedes’ air freshening system was fitted with a “Pacific Mood” jar of liquid fragrance, its intensity adjustable via climate control. Mercedes describes “a fresh, aromatic Pacific wind that leaves a tang of salt on the skin.” Of course.

Another console button raises a huge mesh windblocker at the rear, but on this beauty, it’s as unsightly as an old badminton net. And if the cockpit is a stateroom, the trunk is strictly steerage, with just 8.8 cubic feet of storage when the space-stealing top is down. In that mode, the trunk barely fit my single large roller bag and a backpack. One other nit to pick: The Distronic adaptive cruise control repeatedly disengaged on a run from Dutchess County to Manhattan, seemingly flummoxed by dappled light that rapidly switched between sun and shade.

At about 4,800 pounds, the Mercedes weighs about 110 lbs. more than the coupe, but undercuts the brawny Bentley ragtop by some 700 pounds. Yet like the Bentley, the Mercedes does a reasonably good job of disguising its size and mass. Unlike the far-pricier Bentley, the Aston Martin DB9 Volante, or a BMW 6-Series, the Mercedes’ rear seat will happily accommodate adults, at least with a bit of space sharing from the folks up front. After my daughter cozied into the back, the front seat pulled the same trick as the S-Class Coupe, automatically gliding rearward until it touched her knees, then settling forward about an inch to demarcate the territory.

With standard air springs and plush suspension tuning, the Mercedes does lean and roll a bit into corners. And the brakes, most annoyingly, recall the steamships of old, or a Lexus LS: Powerful but spongy, they cry out for more initial bite, especially for such a beefy car. The rest is pure afternoon delight: A 4.7-liter biturbo V8 dials up an ample 449 horsepower and 519 pound-feet of torque; abetted by Mercedes’ discreet new 9-speed automatic transmission, the S550 Cabrio rushes to 60 mph in 4.4 seconds, accompanied by a subdued baritone exhaust rumble that gets better with the top down.

Steering is a well-oiled pendulum, if stingy on road feedback. On brutally scarred upstate New York roads, a few quivers found their way into the windshield header and steering column, but it's mild stuff considering how much roof is chopped away. The Mercedes feels like sculpted granite and drives like a dream—the one where you find yourself living in some surreal mansion. Cranked up to Sport mode, the Mercedes set a surprisingly hot pace on country roads. If sun-drowsy passengers don’t object, the Cabriolet will simply bully lesser cars out of its way. And its surprising spectrum of lush ride, grip and control seemed almost more impressive in tight quarters—including the switchback climb to the Perkins Observation Tower atop Bear Mountain—than on wide-open highway sweepers.

For an even-faster tempo, the $177,000 Mercedes-AMG S63 Cabriolet delivers 577 all-wheel-drive horsepower and 664 pound-feet from its 5.5-liter biturbo V8, dropping the 0-60 mph sprint to a ridiculous 3.9 seconds. To really go stem-to-stern with the ultra-rich, the AMG S65 version gets a twin-turbo V12 with 621 horsepower and 738 pound feet, but for nearly $228,000 to start. That's nearly 100 grand beyond this S550 version, and it seems money wasted. Unless you keep a helicopter on your personal deck, or have Paul Allen's "mine’s bigger!" issues, this mellow, unbuttoned dude isn't into power chords and screaming climaxes. Expressly designed as a large-scale cruiser, the Bismarck of Benz will still kick up as much summer breeze as you like.

That, for a smooth-rocking, all-night-longing convertible that would make Christopher Cross himself break into a chorus of “Sailing.” Seaside or further inland, it doesn’t matter: This Mercedes will be at home wherever blue bloods and blue blazers gather.