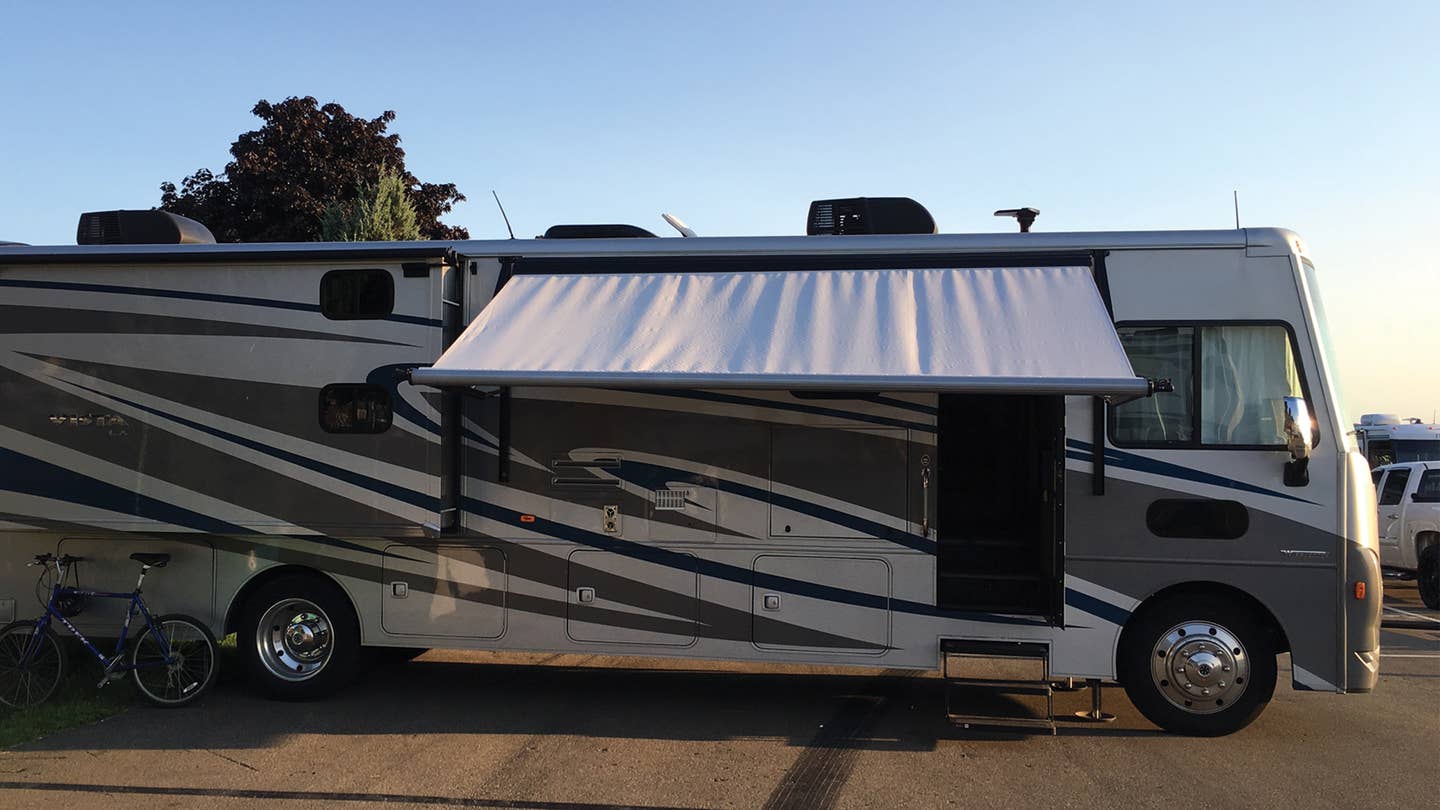 Welcome to Critic’s Notebook, a collection of impressions, jottings, and marginalia on whatever The Drive writers happen to be driving. Today’s edition: the Winnebago Vista LX 35B.

Everyone should drive a recreational vehicle at least once in their life. Even better if it's a big, honking one—say, over 35 feet long. You need to feel the heart-stopping, pupil-dilating terror that immediately sets in when you climb into a captain’s chair, wrap your hands around a tiller the size of a pizza, and cautiously wallow your way around America’s highways. You need to do this for two reasons: First, you’ll have greater compassion and understanding for anything on the road bigger than a car; second, when your panic eventually subsides, you’ll have a helluva good time.

I speak from both experience and, until very recently, lack thereof. Having never driven a motorhome despite lusting after one the better part of a decade, the kind folks at GoRVing.com helped put me behind the (very large) wheel. The mobile mansion? A Winnebago Vista LX 35B, a $152,000, two-bathroom behemoth that could sleep seven. The destination? Watkins Glen International raceway for the penultimate IndyCar series race over Labor Day weekend. I’d arranged to be embedded with champion Chip Ganassi driver Scott Dixon, and the IndyCar folk had secured me a spot to park the RV in the driver- and owner’s lot. I coaxed my skeptical girlfriend into accompanying me and a week after all the plans came together, we found ourselves standing in the parking lot of the Comfort Inn in Edgewater, New Jersey, awaiting delivery of our weekend home.

When it rounded the corner, my brain had a meltdown. No, no, no. That’s way too big. Run away immediately and get a rental car and a hotel room, you idiot, I thought. My girlfriend said basically those words, aloud. The Vista LX 35B is 36.5 feet long, eight-and-a-half feet wide, and 12.5 feet tall. It tips the scales at 26,000-pounds—more when you factor in 80 gallons of fuel, 93 gallons of fresh water and another 179 gallons for wastewater, and 18 gallons of liquid propane.

“Ever drive anything this big?” the transport driver inquired, sizing me up. Not even close, sir, I told him. A bemused chuckle escaped his lips. “Welp, she rolls around a bit. And stay clear of trees on side streets. They’ll scratch the sides. Good luck.” With that laconic advice, a set of keys were pressed into my hand and we were suddenly alone with the biggest press loaner ever.

I fired up the Ford V-10 and plopped down into a Barcalounger that doubled as the driver’s seat. I gingerly tapped the accelerator, prompting the beast to lurch forward. My girlfriend gasped; beads of sweat appeared on my brow. We crept out of the parking lot and inched onto the road. Six minutes later, we were perilously stuck.

There was only a quarter tank of gas when it arrived and, with an average of 6 mpg, I wanted to fill up before hitting the highway. Wheeling in hard to the first station I saw, I overshot the pumps and had to back up. After only a moment of reversing, I realized there was a building behind us. With the pumps now directly in front, we were wedged in. I opened the window and hollered to the attendant. “Do I have any more room back there?” Ambling over, he peeked around the back before shaking his head no, then walked away.

Some smart engineering in the RV ended up saving our bacon. Crank the wheel over hard and give it a hint of gas, and you’ll find the wheels will really open up and cut down your turning radius. Inching forward and backwards, in a 20-plus-point turn, we finally freed ourselves. I got back on the road, too embarrassed to actually gas up at that particular station.

On the highway, the Vista handles with the agility of a drunk elephant. Tug desperately on an ear to change a direction, only to feel everything going a touch squirrely, then yank on the other side. It’s a constant balance of wheel motion to keep it in a straight line. The first 60 miles were harrowing and full of little yelps whenever anyone would get close in an adjacent lane. But after that, it all began to feel normal. Eventually, after not too long, you can actually settle down and relax a bit.

In terms of grunt, the Triton V-10 powerplant is capable, but not quick. It will get you up a hill, but it will take forever. A governor kicked in at 75 miles an hour, which was a smart addition by either the GoRVing folk or the Winnebago engineers. You don't need any more speed. The brakes were a touch spongy, but with proper pressure, they’ll get you to a halt quickly.

The last vehicle I drove before the Winnebago was an Audi RS7. A stealthy German racebomb this wasn’t, and the Winnie required far more planning for spatial relations. Allow extra gaps to get those 13 tons to slow in a safe manner; brake before you enter a downhill highway curve to scrub unwanted speed. It required more thinking than I’m used to behind the wheel and, at some points, seemed to demand so much forethought that I wondered what about this experience was so enjoyable to the millions of silver-haired RVers who take to the roads across our country.

Then we got to Watkins Glen. The Winnebago has side extensions to expand the living and bedroom areas into a healthy amount of space. With just the two of us inside, it felt downright huge. The auto-leveling jack system deployed with the touch of a button and made for a rock-steady base. The water and electrical hookups were a breeze, and within fifteen minutes, we were lounging on the spacious leather couch in the living room, enjoying a frosty brew from the fridge.

Over the next three days, we lived like kings. Cooking was a snap with the three-burner range. We plugged in a computer to the 42-inch TV (one of five) in the living room and watched movies at night. The queen bed in the master suite was very comfortable. The shower in the master bath was more than ample for my 6-foot 2-inch frame and, provided I remembered to hit the water heater pump a few minutes before climbing in, the water was plenty warm. By the end of the weekend, Dixon had not only won the race but set a new track record, my girlfriend’s skepticism towards RVing had abated, and we had a solid weekend of fond memories in the book.

Breakdown was equally easy. We packed and got on the road in under thirty minutes, and the drive home was not only uneventful, but fun. You get used to the jouncy land-whale’s handling, and can start to anticipate what you’ll need to do to counter an impending issue. It’s still more work than in an everyday commuter car, but there’s also a strong sense of pride that comes as a byproduct of RVing—a feeling that can only come after you successfully pilot a 13-ton home down 600 miles of freeway. It’s a feeling I hope to have again very soon.