This Proterra E2 Bus Covered 600 Miles on an Electric Charge

Next stop: a city or town near you. 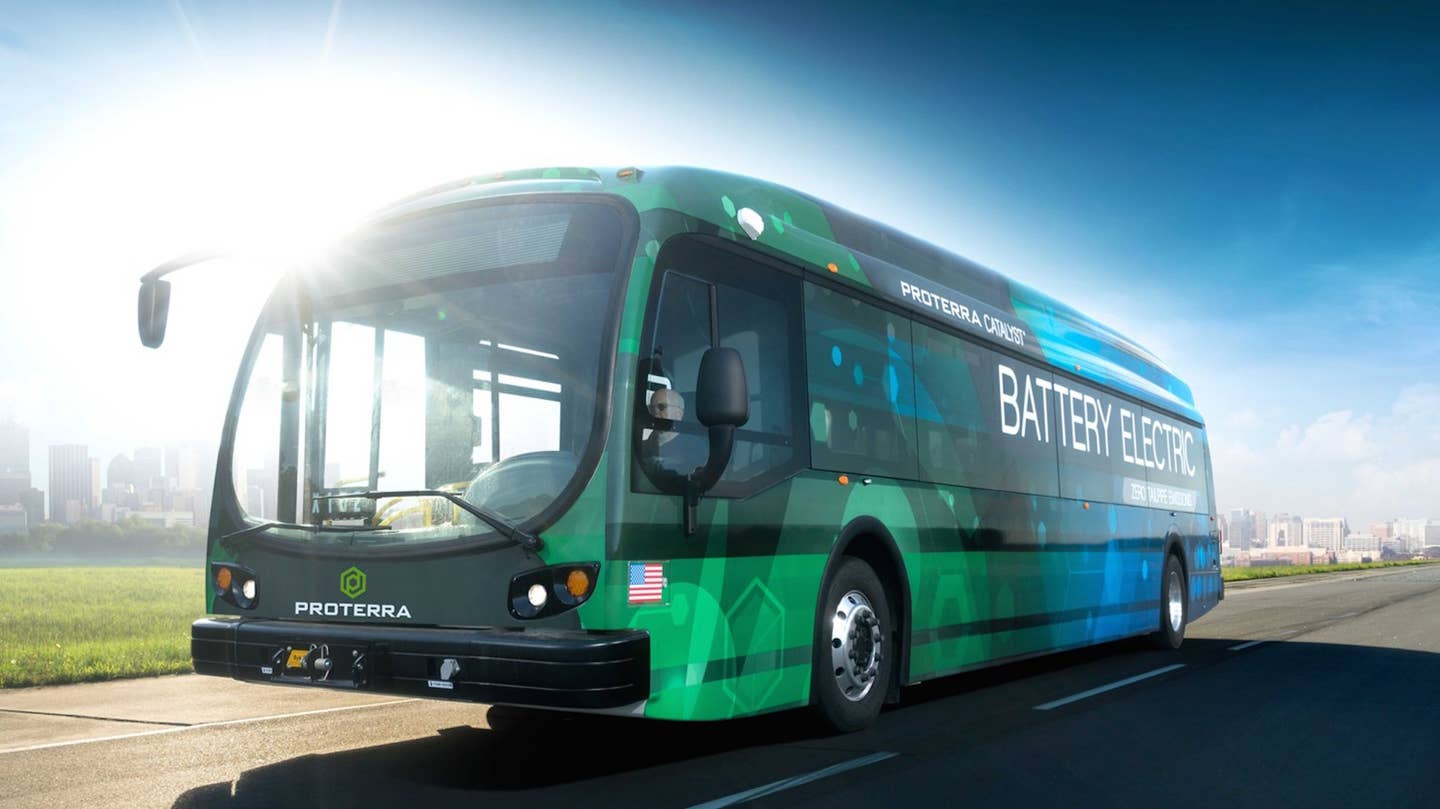 Holding your nose and gagging behind a smoky diesel bus is a fact of urban life, but a Silicon Valley company hopes to clear the air. Proterra says its latest all-electric bus can travel 350 real-world miles on a change—farther than any Tesla. And while a Tesla Model X seats seven passengers, Proterra’s bus can carry up to 70.

Unveiled in Los Angeles’ City of Industry, the Proterra Catalyst E2 is a sleek—by bus standards, at least—40-footer that uses less energy than a gas-guzzling SUV. The company, led by a former Tesla executive and stocked with EV and battery engineers from Ford, General Motors, A123, and others, is looking to shake up mass transit the way Tesla has disrupted mass-market automobiles.

The Catalyst E2 can carry up to 660 kilowatt-hours of batteries, as much juice as 11 Tesla Model S P60 sedans. With zero tailpipe emissions, the bus can dramatically reduce greenhouse gas emissions and eliminate the noise and noxious pollution of its fossil-fueled rivals. And where a diesel bus averages about 4 mpg and a diesel-hybrid 5 mpg, Proterra says its bus returns the energy equivalent of 23 mpg. That’s enough, Proterra claims, to a cut a single bus' annual energy bill by $25,000 a year versus a diesel model, with similar savings in maintenance.

On a Michelin test track in South Carolina, the company says, the E2 recently ran for an incredible 603 miles on a single charge, returning the electric equivalent of 50 mpg ("mpge” in the latest federal lingo), which is on par with a tiny Toyota Prius. That distance was covered with no passengers aboard and without cabin climate control, at an average speed of about 23 mph. But Ryan Popple, Proterra’s chief executive, says that the E2’s real-world range of 350 miles will let it cover the nation’s longest public bus routes with miles to spare.

Like most modern cars, the E2 is built on a unibody chassis rather than a traditional steel truck frame. The weight-saving structure blends strong, lightweight carbon fiber with a molded composite body. Even with four massive battery packs aboard, the bus weighs roughly 29,000 pounds—a bit less than a comparable diesel, diesel hybrid, or compressed-natural gas (CNG) model. A single compact electric motor, weighing about 200 pounds, sends about 300 horsepower (or 220 kilowatts) and 400 pound-feet of torque to rear wheels through a two-speed gearbox. In contrast to most city buses, the space-saving design even allows a rear window, like the iconic Greyhound Scenicruiser buses that General Motors built beginning in the 1950s.

Popple, who worked as a Tesla financial executive from 2007 to 2010, says that electric propulsion is tailor-made for a bus’s reality of slow speeds and constant stops. A public bus might stop 500 times a day, meaning 500 chances to apply regenerative brakes that capture heat and convert it to electricity for the batteries. The buses can recharge at depots on the standard 240-volt connector used by EVs and hybrids, including the Chevrolet Bolt and BMW i3, or charge at route stops via overhead fast chargers that connect through the roof. Popple says the E2 can reduce greenhouse gas emissions by 80 percent versus a straight-up diesel, and that’s using electricity entirely powered by fossil-fuel sources. Based on the typical mix of sources in the U.S. electric grid, the reduction is closer to 86 percent.

Buses may not be as glamorous as bullet trains, but they’re a critical part of public transportation around the globe. In America, more than half of all mass-transit rides are taken on a bus. Roughly 70,000 diesel, CNG, and hybrid buses pick up passengers in American cities, with cities ordering about 5,000 new models each year. School districts fill another 20,000 buses with students. The nation’s diesel buses alone consume about 1 billion gallons of fuel.

“There’s no way to get to where we need to go on climate change if the internal combustion engine is the prime mover. There’s just too much waste heat,” he says, with IC engines frittering away a good 80 percent of their energy into the atmosphere.

That mass-transit sector, Popple says, has done a better job of cleaning up its act than passenger cars. City transit directors may be conservative in operational terms—hyper-focused on costs and fleet durability—but they’re often quite progressive when it comes to adopting new technology.

“They understand the way cities work, and they tend to be on the green side, because these are an alternative to cars,” Popple says.

Miami is one city where global warming has stopped being theoretical, with the water-inundated city planning to spend $400 billion to buffer itself against the fast-rising ocean.

“In places like Miami, climate change is no joke, and people are saying we have to take this seriously," he says.

Transit leaders in some progressive cities envision full-EV fleets by roughly 2030, and those ranks include Proterra’s first and best customer, Foothill Transit, which operates 39 bus lines in 22 cities from downtown Los Angeles and Pasadena to southwest San Bernardino County. About 100 earlier-model Proterra buses, built in Greenville, S.C., are already operating in places including Los Angeles County, Louisville, and Worcester, Mass. Those buses have logged 2.5 million miles of passenger service.

The company says it's tripling manufacturing capacity to meet more than 200 orders for its E2, and will soon announce several new customers in major cities. The company received a $3 million grant from the California Energy Commission to help create a second manufacturing facility in Los Angeles’ San Gabriel Valley.

One new customer will test the E2's ability to rack up miles in extremely cold weather, which can dramatically reduce EV driving range. Duluth, Minn., is one of the coldest cities in America, with an average low of 1.5 degrees on a typical winter day. But Popple says the major challenge isn’t the battery, thanks to extensive thermal management, but instead the need to heat the massive bus interior. Duluth is asking for traditional kerosene heaters to keep passengers toasty, but since onboard, emissions-belching barbecues tend to defeat the electric purpose, Proterra is hoping to get the job done with things like thicker windows and extra insulation.

Proterra isn’t alone in eyeing the electric space. Tesla has pledged to unveil its own electric buses and semi trucks next year—and self-driving ones at that. Electric buses only hold about 1 percent of the current market, Popple says, but their energy savings and the rapidly falling price of lithium-ion batteries are quickly bringing them into price parity with dirtier technologies, including compressed natural gas.

A typical diesel bus burns $32,000 a year in fuel, compared to $7,000 in electricity for the Proterra, the company says. With comparable savings in maintenance costs, including 30 percent fewer parts than a diesel bus, the roughly $700,000 bus would pay back its additional technology costs in only three or four years, he says, far faster than most EV and hybrid cars.

After his stint at Tesla, Popple moved to the clean-mobility space at Kleiner Perkins Caufield and Byers, the noted Silicon Valley venture capital company. He was also a Proterra investor before the company brought him aboard as chief executive. In other words, he’s a true believer.

“We don’t worry at all any more whether this is a good idea,” he says. “Electric is going to end up being 100 percent of the transit market. In 10 or 15 years, we’ll laugh that diesel buses even existed.”