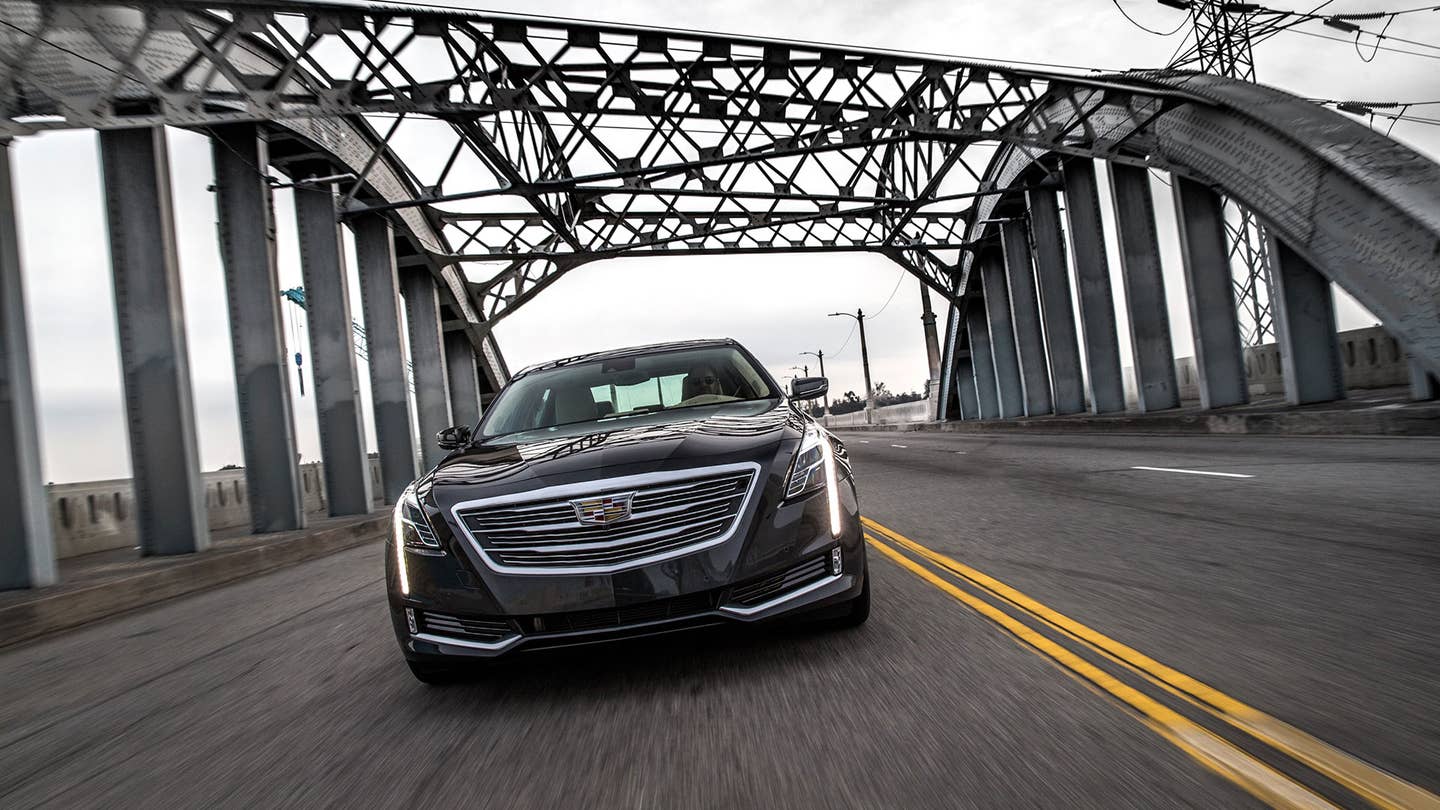 Three of The Drive’s staff—senior editor Will Sabel Courtney, entertainment editor Sean Evans, and staff writer Ben Keeshin—each recently completed a supremely comfortable stint in the 2016 Cadillac CT6 Premium Luxury. They discussed the finer merits and detractors of the plush, handsomely-styled, navy-colored sedan via Slack, an instant message program with a fun ability to summon random gifs based on what users type. The following is a transcript of that conversation.

Will Sabel Courtney: So, we all drove the Cadillac CT6 recently. Which is obviously a fairly important car for Cadillac.

Ben Keeshin: Is it truly the flagship? Isn’t it kind of like the Chrysler Building before the Empire State Building was built, in that it will only keep the title for a short while?

WSC: It’ll hold it for a few years, at least. There’s supposed to be a true S-Class fighter a few years down the road. But the CT6 isn’t a stopgap. It certainly doesn’t feel like it, either.

BK: It feels large and grand and long. (LONG.) If not as enriched as the S.

WSC: I was briefly trapped in a parking lot because of its size, with some Jersey jerk giving me crap for blocking things up.

BK: Ah, yes. A Cadillac should be so long that when you watch it turn the corner, you have to wait several seconds for the rear end to arrive. Speaking of size, I think that’s it’s best visual feature. This is a classic case of See It In Person.

SE: My grandfather had an ‘02 DeVille that fit that bill, but this felt as luxurious, though far more developed. Far firmer.

BK: I would go so far as to say it felt Taut AF. If you strummed it, it would play a crystal-clear high E, as opposed to the ‘02 DeVille’s pleasant bass G.

WSC: Speaking of sound, that Panaray sound system was damned impressive. I felt like I was getting face-slapped by the Foo Fighters.

SE: Agreed. Though I find it a little odd Caddy and Bose won’t release the wattage on the system, I did love it.

WSC: That’s because it has ALL the watts.

SE: I like that it can go so loud, you can drive with all the windows down at 65 mph and never hear the wind.

BK: I felt like I could smell Carly Rae Jepsen’s scented body spray.

SE: Including two in the headrests. So Carly Rae can whisper to you, Keeshin.

BK: I have tinnitus but if I didn’t, I would happily get it again by listening to the Panaray.

BK: Can we mull the interior while we praise the ‘Ray?

WSC: Rest of the interior was solid.

SE: The interior was great. Very luxe. Loved all the amenities. Especially given the price.

WSC: EXCEPT the digital rearview mirror. Hated that.

SE: That digital mirror was awesome. It covers your blind spots.

WSC: The hell it was. So do your side mirrors if you aim them right.

SE: Do you hate safety and convenience?

WSC: The digital mirror has a completely different focal point than every other rear view mirror. Every time you look at it, you go cross-eyed. It hurts.

SE: Only you, princess.

SE: You Luddites. Have fun adjusting the mirrors on your buggy when the horse is pulling.

BK: The rest of the interior is beautiful. But it didn’t feel solid to me. At least as solid as the cars it’s attempting to ape. I.e. S-Class or E-Class.

BK: I feel comfortable saying that Cadillac interiors feel 300 percent better than they were five years ago. In terms of lacking, just the movement of things. Air vents. Glove compartment. These are small gripes. And, hey, maybe that better fits with the car’s project of lightness.

SE: I respectfully disagree. I find that interior nicer than an E-Class and on par with the S.

BK: Well, you have weak hands. Like a diseased capuchin.

SE: Beautiful. Not as beautiful as the outside of the CT6, tho. That’s one sharp car.

WSC: Very true. When I first saw pictures, I thought it was too similar to the CTS. But it looks much more unique in person.

BK: Again, I would say: size. But the surfaces are more refined. Third best-looking Cadillac behind the Escalade and the ATS coupe?

SE: I don’t think those are comparable. I like each of those for the segments that they represent. I think we’d do better to compare the CT6 against the Germans.

WSC: It certainly has a lot more character than most of them. Then again, a lot of them have Audi Syndrome, where they make all their sedans look identical.

BK: It’s my favorite of the big sedans. There’s some definite nationalism in there. But my current favorite. Audi is anonymous, BMW looked better last generation, and Mercedes is successful but ubiquitous. The Caddy is the perfect thing to park outside a steakhouse. Or a dock. Or...the docks.

WSC: Or when you go to beat up the dock workers. There’s definitely a sense of Tony Soprano-like master-of-the-universe cockiness that comes from driving the CT6. (Maybe that’s just because I was driving in Jersey.)

WSC: Let’s all not talk about how it’s the same engine as the V6 Camaro. It’s a really solid engine. Makes all the power you need in a car like that.

BK: Punches above its weight because of the CT6’s relative lightness. It is the same engine, but it doesn’t matter! Damn the snobs to heck!

BK: Honestly, this is retrograde, but I do wish it had a V8. Just to drive home that presence and sensuality.

BK: Not even power-wise. Just for the sound and the feel of the thing.

SE: I could’ve done with a bit more horrorshow out the tailpipes, but I never wanted for actual power. Or delivery of said power.

WSC: That would be completely against the nature of the car. The noise, I mean. It’s a smooth-riding luxury sedan. You want noise? Wait for the VSport version.

BK: Yes, yes. Would definitely. Think it pulls off the Lexus/Hyundai size and quality for less.

BK: It’s a hot Caddy and I want one. I think dads across America will, too. Feel that average Cadillac buyer age plummet.

WSC: Everybody in America ought to drive the CT6 so they can see how far the brand has come.