It's also perfectly built for the racetrack—and that's why I'm selling mine. 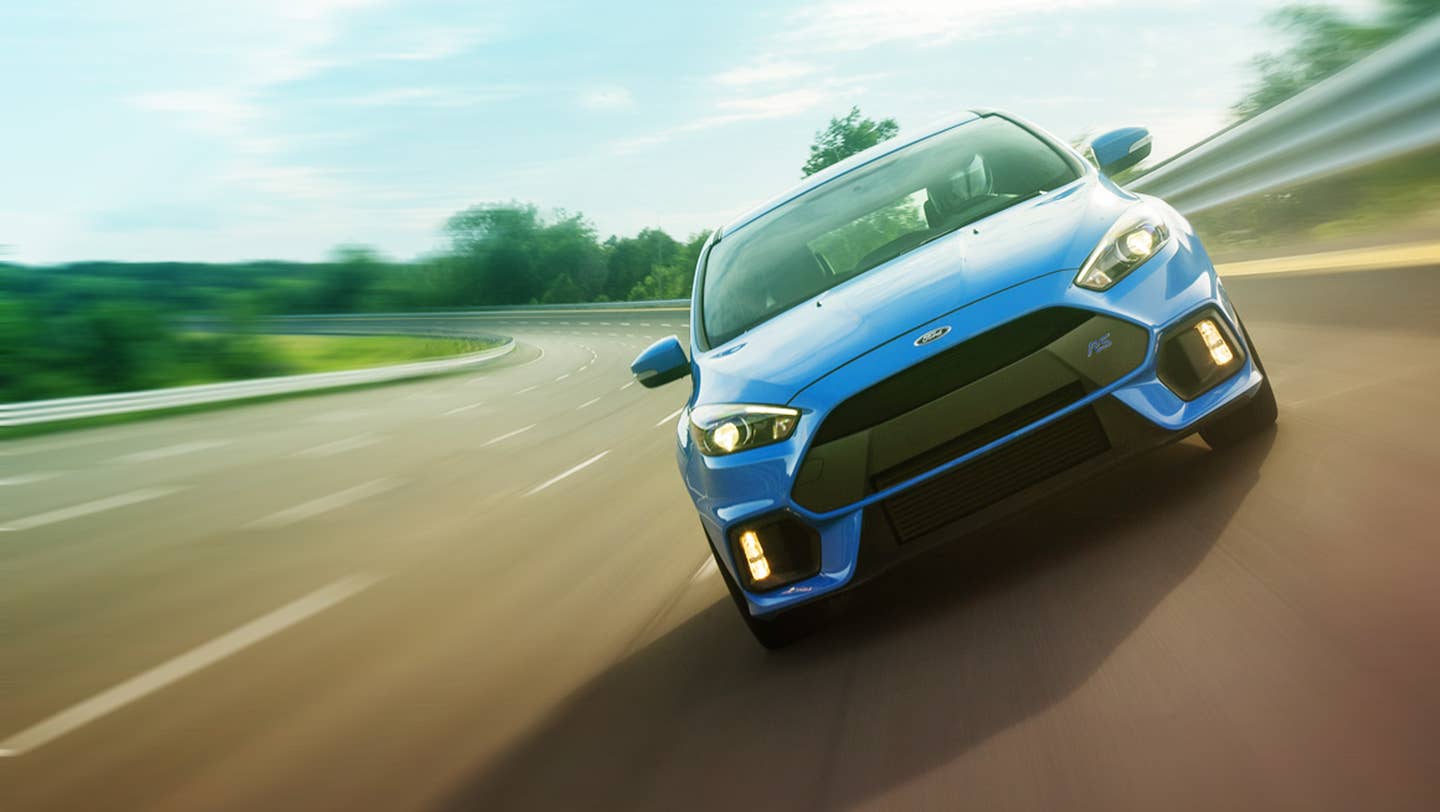 The setting couldn’t have been more perfect: Anglesey Circuit in North Wales, a picturesque race track the likes of which we could never, and would never see in America. Imagine the Pebble Beach Golf Links, sitting high on the cliffs over the ocean—misty sea breeze, seals, and all—and bulldoze that thing right out. Then bring in the road crew and lay down 2.3 kilometers and 11 turns of flowing tarmac right there on that oceanfront piece of dirt.

That’s Anglesey. You’ve never seen anything like it. And it’s worth the 20 hours of travel from California just to walk the place, let alone drive it.

And sitting here in the paddock in front of me is a vehicular scenario, which, likewise, couldn’t be more perfect. A Euro-Spec Ford Focus RS presser, black with those awesome Recaro buckets we saw on Top Gear, unobtanium on these shores.

I wrote about my own saga of ordering, waiting an eternity, taking delivery of and driving my own personal Focus RS last month, and since then, here’s what that’s been like: It sucks.

I’ve sat in more traffic in this car than I could ever begin to tell you. In the first 982 miles of my Focus RS’s life, the average speed is an indicated 12 mph. That’s what living in LA is like, and with a Focus RS, you might as well have bought a lion, put it in a cage, and then acted all surprised when the lion isn’t exactly grateful. Driving this thing around LA goes like this: First Gear, Second Gear, Stop. First Gear, Second Gear, Stop. Then repeat that, 14,000 times.

Which brings us back to North Wales, the site of a beautiful film that the immensely talented cast of /DRIVE on NBC Sports are making for our upcoming season 3. I can’t tell you anything about the film itself, except that it put me on the world’s prettiest racing circuit with a carbon copy of the car I spent a year and a half waiting for, and that so far, I haven’t gotten to drive fast at all.

Well, almost a carbon copy. The map lights are, for some reason, in an entirely different place, this one has the basic stereo, which is terrible, and of course the driver’s seat is on the right. Driving on the wrong side of the car doesn’t bother me; I’ve shifted with my left hand in the UK, New Zealand, Japan, and Australia—not to mention here in America during the six months I had with my Nissan Skyline GTR, but if I told you I was as quick or precise a driver from the right as from the left, I’d be a liar. It does have the same Michelin Pilot Super Sports as my car, which, on a hatchback, I prefer to the Cup 2 options.

It’s so obvious what Ford had in mind with this car after just a few laps around the circuit: this is a track machine.

Nevertheless, press launch conditions have been achieved, and it was finally time to find out what a Focus RS can do when pushed.

Two corners in to the seaside paradise called Anglesey, and I’m blown away. The power up top for a car at this price point is staggering. It’s happiest above 4,500 RPM with the turbo at full song, and crosses 125 mph on the short, double-kinked, uphill back straight. No lifting necessary here. But the RallySport heritage shines most when diving into a corner.

Lean onto the brakes, turn the nose in hard, and it sticks. The steering is knife-edge, and if movement happens, it happens from the back first. That’s right, folks, it has a tendency to oversteer at the midcorner, just like a real rally car. Stand on the throttle, point the nose at the exit cone, and BANG!, you’re gone. No understeer on the exit either.

As those of us who drive on track mostly understand—and Chris Harris has so eloquently phrased to me—on a track, it’s all about the front of the car. A good driver can always manage the back of the car, as long as the front goes where you point it. The RS goes exactly where you point it, even after 10 hard laps at a proper pace. The front tires and brakes showed no signs of fade or slop.

At full boil, especially while blipping the throttle on downshifts, the fireworks out the back amplify the experience threefold. No stock hot hatch sounds like this without a cat delete. The bass tone of the car— sadly, played through the subwoofer in the trunk—mostly goes unnoticed as long as the RPM’s are in the top half of the tach.

‘Track’ mode is too stiff for any scenario I’ve encountered so far, and ‘Sport’ mode likes Anglesey’s rough-and-tumble corner striping just fine. It’s no problem at all for the Focus’s pace, save for some unpleasant vibrations through my spine.

It’s so obvious what Ford had in mind with this car after just a few laps around the circuit; this is a track machine. On the road it’s stiffer than the Golf R or Subaru STI. It's less compliant, and it makes its power higher up the rev range. It’s less usable every day, not for any real practical purpose, but because it simply can’t be enjoyed at a slow pace. When you’re going slow, it’s a boring car. Contrast that with the Shelby GT350R, which is fun to drive both slow and fast, on account of it’s pitch-perfect sound and street presence.

When you’re unashamedly romping all over a borrowed presser, all that “God’s Hatchback” bullshit we read from the press launch makes total sense. The clutch and shifter feel better than the Golf R, with just enough extra weight to feel the engagement points of both. It also corners flatter than Golf R, and the engine is more inspiring than STI. It feels like you took either of these cars and did a full track-spec suspension build on them; that’s how the RS is, right out of the box.

This car is an absolute riot around the track; it’s fast, it’s neutral-to-tail happy, laser-precise up front, it’s predictable at the limit, makes all the right noises, and most importantly for a hot hatchback, it’s stupid, stupid fun.

It was with an air of sadness that our producer JF Musial flagged me back into the paddock, so I could go back to work. I could have easily stayed out there lapping Anglesey all day long. I had let the lion out of the cage, and that sombitch let me strap on a saddle and ride it across the savannah. A ride like that sticks with you.

7 hours of transit back to Heathrow, 12 hours of flying back to LA, and a 40 minute Uber to my house, and there, in my garage, was my Focus RS. 982 miles at twelve miles an hour. The blue paint all of a sudden became metaphorical.

I ditched my bags, grabbed a shower, and hopped in the Focus to drive over to Hannah’s house, 4.4 miles away. The US spec seats aren’t as cool as the Euro buckets, but they are way more comfortable and sit about an inch lower in the car. It took 35 minutes to get to Santa Monica. First Gear, Second Gear, Stop. Eight miles per hour.

Flashing back to Anglesey, if you took only the driving I did in the paddock of the circuit, and not on the circuit itself, I would have had a higher average speed than that.

Driving the Focus RS on track was the worst thing that could have happened to my ownership experience so far. I learned what the car can do, what the car should be doing, and what I would probably never ever do in my own car. I’m at the track 30-50 days per year, and never in my own car. Because of this awesome job I somehow still have, my work days are like car guy fantasy camp; an incredible cross-section of street and race cars on the road and the track. No one lives like this. But honestly, I work hard, and I work long, all of us in this business do, and when we get home from a week of eighteen-hour drives, the last thing I’m thinking is, “Man, I should really sign up for a track day.” For fuck’s sake I have two track-ready cars, a Mustang and a Corvette, both with huge brakes, sticky tires, buckets, harnesses, rollbars, and full suspension setups on them, and you know how many times I’ve been to the track in those cars in the last five years? Zero.

Realistically, if I’m not driving fast on video, I’m just running errands, going to the office, to my girlfriend’s, to meetings, etc, and sitting in a horrible grid of bumper-to-bumper traffic on roads that haven’t been maintained since the 1960’s. My lion is caged and it fucking sucks.

And every time I take it to the canyons, that’s another day that one of my other cars, cars I spent a long time setting up for sporty driving, just sit.

Which is why I’m getting rid of it. Eighteen months ago, when I ordered the car, it seemed too good to be true. When the early reviews came out, they only reinforced that idea. Seeing my own car pirouetting on Galpin Ford’s turntable, sitting in it, being comfortable, and wanting to take it home seemed like a lot of sense. But it doesn’t make sense. Because I don’t drive like the RS needs to be driven, ever.

Let me make something very clear if I haven’t already: the Focus RS is an incredible performance machine. I’m not bailing because the car isn’t good, or because the lease is too expensive, or anything like that. I’m getting rid of my Focus RS because it’s not matched to my real world needs for an everyday, Los Angeles car. If it was a Shelby, I’d probably deal with it, because the thing sounds so damn cool at low revs, that I could probably be satisfied. But the Focus sounds like nothing, feels like nothing, and isn’t anything special at all until you actually go out and use it for what it’s meant for; then it becomes very special indeed. In traffic, it’s just a stick-shift Focus with pretty blue paint and a stiff suspension.

So a friend of mine up north is taking her off my hands early next month, and I’ll be replacing it with something else, something I’ve already ordered, for daily driver duty. Feel free to have a guess as to what it might be in the comments. The only hints I’ll give are that the payment is about the same as the RS, it is a brand new car, and I have done a review of the car in the past.

And if you’re considering buying a Focus RS, I will leave you with this: do it, if you’re gonna use it. Ford has gone above and beyond building what is most certainly the world’s finest performance hatchback. But like the Raptor before it, it only becomes special when used under the conditions for which Ford currently designs the best enthusiast cars on the market: epic hooning.

Contributing Writer Matt Farah is brains behind The Smoking Tire YouTube channel and podcast, and a star of /DRIVE on NBC Sports.