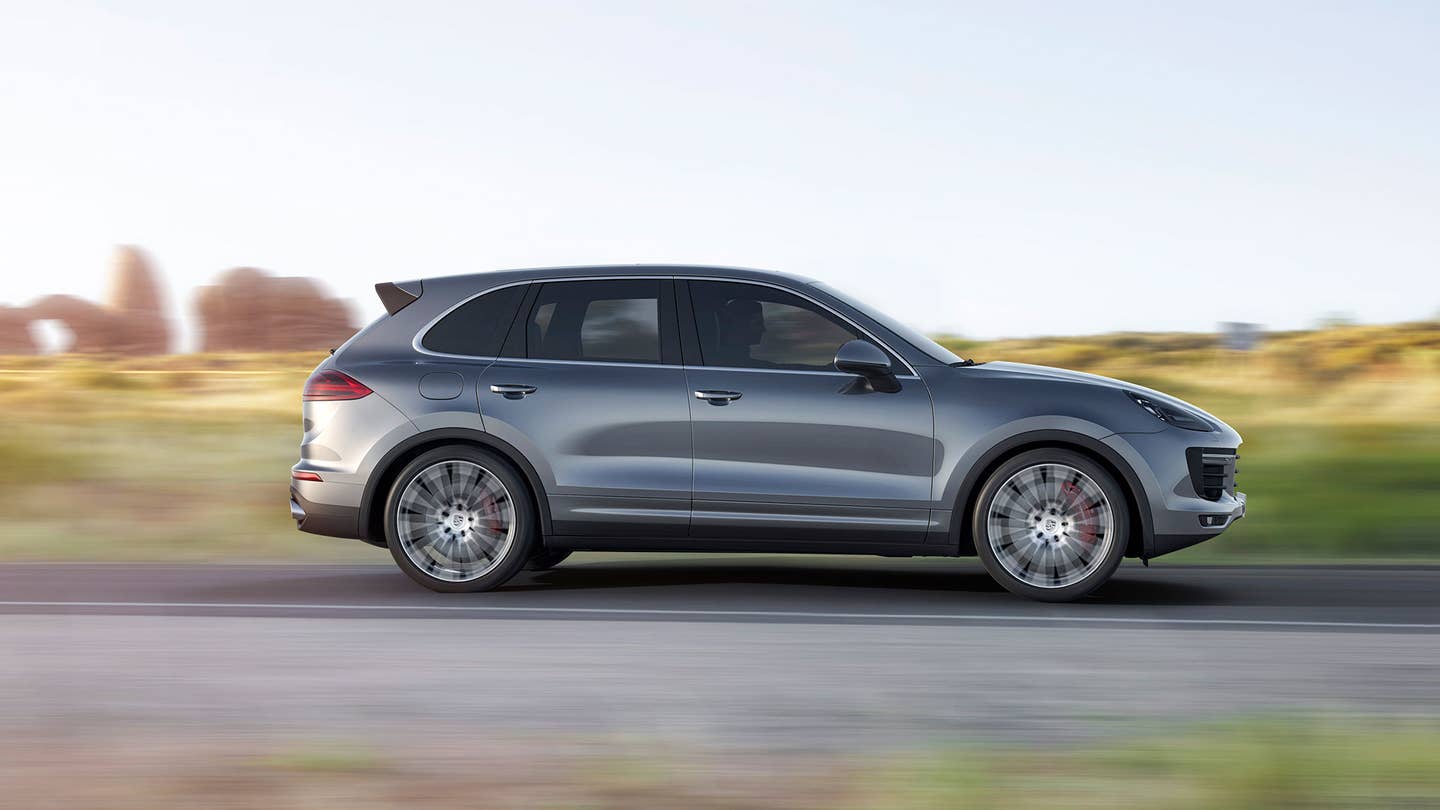 Believe it or not, the Porsche Cayenne Turbo S—a 570-horsepower SUV with barely more rear legroom than a Chevy Equinox—makes perfect sense. Really. Not at Newport Beach’s Fashion Island mall complex, or on New York’s 25-mph-restricted streets, or even on Westchester’s dirt-covered back roads. No, it only makes sense in its German homeland—a place whose roads might be the world’s best; its dinner, the 'wurst. In the words of one famous, massive Irishman, the Porsche Cayenne Turbo S has a very particular set of skills—skills acquired over a long career of crushing kilometers at rates north of 200 per hour.

Let’s take stock of the many talents of Porsche’s biggest trucklet. For $159,600, the Cayenne Turbo S presents some of Porsche’s best go-fast technology, all bolted a 4927-pound SUV in the hopes beating the likes of the Range Rover Sport SVR and BMW X5 M at the manic-soft-roader game. The engine is a twin-turbocharged, 4.8-liter V8 with 570-horsepower; the transmission, an eight-speed Tiptronic automatic—a dual-clutch PDK wouldn’t have allowed the 7700-pound tow rating some Cayenne customers demand. Adjustable air-suspension, dynamic chassis control, and torque vectoring mean the Cayenne Turbo S goes from 0 to 60 mph in 3.8 seconds and laps the Nurburgring in under eight minutes, making a chastened mincemeat pie out of the Range Rover SVR and its 8:14 lap time

Then there’s the aerodynamically-awkward vehicle’s top speed, achieved via pure thrust: 176 mph. That number would have qualified this truck for “World’s Fastest Production Car” up until 1974, when the Lamborghini Countach LP400 debuted. (Though, currently, we’d bet on the portly Porsche to beat out the Lambo nine times out of 10.) If you haven't tested it yourself, though, it’s almost fictitious, no more than a barroom yardstick for measuring your SUV against another dad’s SRT Jeep or a Big Pharma executive’s Bentley Bentayga. In America, top speed is for yarn-spinning and bragging rights.

In Germany, however, top speed is decidedly applicable—and downright useful. From the Porsche factory in Leipzig to the Frankfurt Hilton is around 300 kilometers, or 186 miles. At a standard speed limit of 120 kph, that’s a 2.5-hour journey. But if 200 of those kilometers are unrestricted, the trip shrinks to just over 1.5 hours, allowing a pace that rivals Cessnas. Hoovering up aircraft-worthy spans of Germany while a) at the tiller and b) glued to the ground is the most satisfying way I have ever travelled, beyond even Lufthansa business class and its tiny ceramic bowls of perfectly-warmed nuts.

It's an experience wild enough to blow the cynicism off 40-plus years of Autobahn-centric German car marketing. For example, Volkswagen’s “autobahn-tuned” rhetoric always seemed a little pretentious, especially when applied to cars like the Tiguan. But driving Porsche’s fastest Cayenne near its top speed, I saw the ways in which the German superhighway creates excellent sporting cars. Mash the accelerator and believe the hype.

Take the Sport+ setting for the suspension and throttle, which jiggles American love-handles in the Land of the Free. On the Autobahn, it composes the Turbo S into a road-hugging wagon at 170 mph, taking the heart-palpitation of out of triple-digit speed lane changes and unexpectedly robust curves. The 10-pot carbon-ceramic brakes—whose yellow calipers are as tall as a 10-month old—feel absolutely necessary when hauling 5800-pounds of Porsche down from a Boeing 757’s takeoff speed, while the sport-exhaust proves its worth by trumpeting a song that alerts lesser drivers to your presence. The leather-covered sun visors remain, well, totally superfluous.

Things simplify at 170 mph. Even on Germany’s prized 'bahn, whose meticulous drivers and silky pavement provide the best highway driving in the world, driving at such speeds is a dicey proposition. Crash at 170 mph and retinae detach, organs flatten, and the aorta pops off a heart like the top off a gallon of milk. So you concentrate, watching for construction zones, curves, and listing Opels. There’s a lot of wind noise, even in a solid Porsche, but it's peaceful. As it's lonely out on top, it's lonely out ahead, where only a determined driver in a similar-caliber car has a chance of keeping up.

When driven so fast, Porsche Cayenne Turbo S loses whatever anonymity its familiar crossover shape allows. Rather, like a cowboy's steed, the Turbo S at full attack straddles the line of vehicle and companion. All it takes to change a $160,000 trinket from show pony to racehorse is the right track.

To those who will never make it across the Atlantic and feel their Turbo S at full muscle on a public roadway: You're living with a stranger. Bring it home, and let this Porsche show you its purpose.