The New Mercedes-Benz E-Class Is Smarter Than You Are

Just in time, Mercedes-Benz takes the fight to Tesla in the race for autonomous juju. 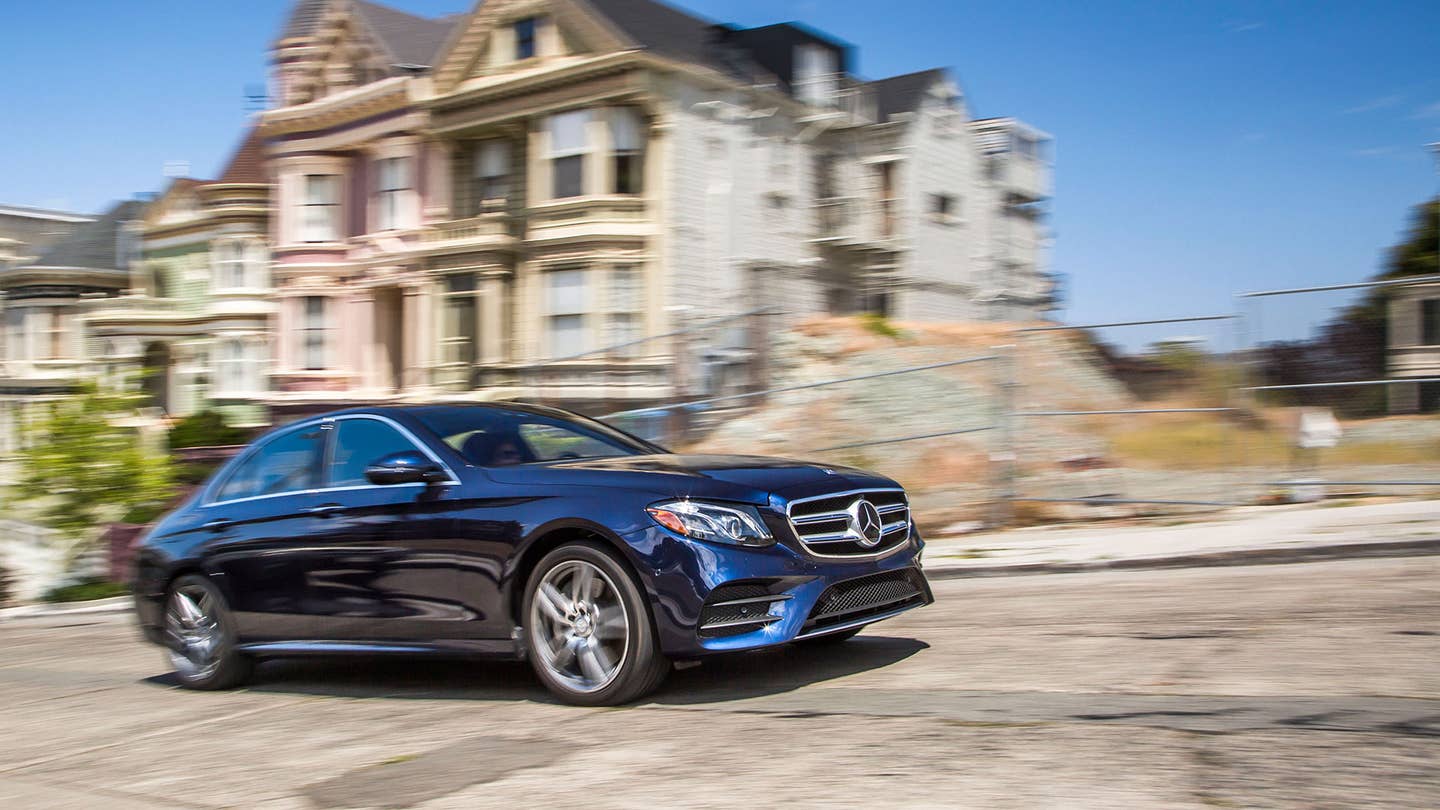 Whether we enthusiasts like it or not, and for better or worse, autonomous cars are coming. And semi-autonomous driving—where your car can change lanes by itself and pass the car in front, warn you if someone’s too close, stop itself completely in an emergency, parallel park itself, and even maintain a pre-selected distance behind the car in front while on cruise control at over 100 mph—is already a reality.

Tesla’s Model S has the now-dubious distinction of leading the way with self-driving technology. For a while, the upstart brand was in an automated class by itself. That’s changing. Mercedes-Benz has 240 scientists ensconced in a lab in Sunnyvale frenetically developing technology to beat Tesla and Google at their own game. We just drove a new production M-B that’s so close to full automation, the state of Nevada has issued it special license plates for autonomous testing. Has M-B pulled ahead of Tesla in the automated field? Keep reading.

The new Mercedes-Benz E-Class hits showrooms in late July. Let’s get the obvious out of the way: our test E300 was equipped with a 241-hp DOHC turbo I-4, a 9-speed automatic, and all-wheel-drive. Zero-to-60 is a respectable 6.3-seconds. The AWD E’s base price is $54,650; delivery adds $925. Slightly larger than its predecessor, the wheelbase is up 2.6-inches; length is up 1.7-inches to 193.7-inches; and its sleek restyling apes the coupe-like CLS sedan.

But that’s not the real news.

M-B calls its 10th-generation E-Class “the most intelligent car in the world.” It’s bristling with sophisticated, 360-degree radar and camera gear. The Premium 3 package gets you a laundry list of remarkable automated Drive Pilot features. Distance Pilot Distronic lets you follow a car at a pre-selected distance, at autobahn-legal speeds up to 130 mph. Steering Pilot can actively intervene to slow or stop you completely in the event of an impending crash, even if the road lines are unclear or nonexistent, at speeds up to 81 mph. With Active Lane-Change Assist, you flick the turn signal stalk, wait two beats, and if it’s safe to pass, the E-Class will actively steer you into the next lane, pass the car in front, then turn smartly back into your lane.

More techno-witchery abounds. Remote Parking Pilot lets you use a special M-B Bluetooth phone app to move your vehicle into or out of a tight parking space, so you don’t have to worry about being able to open your door once you slide in there. Just stand alongside with your phone as controller. Full disclosure: With the Tesla Model S, you can “summon” your car—the Tesla will turn itself on, open your garage door, and drive up to wherever you want it to so you can get in. M-B doesn’t have that feature yet.

We cannot say that we tested all of the E300’s emergency technology. But we can list it all here. Say you’re about to get T-boned at an intersection. Active Brake Assist with Cross-Traffic function alerts you, then it stops the car if it detects a problem on either side. If a side impact is unavoidable, Pre-Safe Impulse Side detects the impending lateral collision, instantly inflates the seat’s side bolster, and moves the driver or front passenger up to 2.75-inches away from the impact zone, reducing the load on the occupant during a crash. If you’re turning hard in an evasive maneuver, Evasive Steering Assist will add calculated steering torque to speed up the turn. There’s even Pre-Safe Sound, which omits a short interference signal when it detects an imminent collision, triggering a protective reflex in your ear, called a “stapidius effect,” to help reduce hearing loss in the event of an accident. I bet even Elon Musk hadn't thought of that one yet.

Coming soon is a world first that Mercedes calls Car-to-X Communication. When it’s activated, your E-Class becomes a virtual receiver and a transmitter, conveying up-to-the-minute warning messages to E-Class fellow travelers on the road, while continuously evaluating driving conditions, so you can effectively “see around corners” and “through obstacles.” It’s like a four-wheel Waze app.

Like Tesla, Mercedes-Benz is emphatic: the driver is ultimately always in control, and all the robot systems default to your every move, unless of course the car senses an imminent hit. Then all bets are off, and after audible and visual warnings, the electronics take charge in a nanosecond. M-B, like several luxury carmakers, has proclaimed its goal to be accident-free driving. Computers aren’t perfect; autonomous cars do crash. But let’s face it: Computers are smarter than humans. Research indicates that if 50 percent of the cars on the road were autonomous, 9,600 lives would be saved and there would be 1.88 million fewer crashes over the course of one year. The new semi-autonomous E-Class goes a long way toward that goal.

There’s more to the new E-class than just autonomous tech, however. M-B has also updated its COMAND control system. There’s a 12.3-inch horizontal display screen, plus tons of additional information on the instrument cluster, right in front of the driver. (Okay, Tesla’s screen is over 17-inches; score one for the Model S on this feature.) The E-Class’s new Touch Control Buttons on either side of the steering wheel employ smallish, touch-sensitive controls that work like a smart phone’s interface, and respond instantly to horizontal and vertical swipes. It’s a neat feature. You never have to take your hands off the wheel while you control virtually everything around you in the car. There’s a redundant central controller on the console, as well. Adaptive LED lighting adjusts for varying darkness conditions and even dims the taillights so they don’t dazzle closely following cars.

So which car outdoes the other in autonomous driving juju—the M-B or the Tesla? Hard to say, as each can do some things the other can’t. The Tesla is faster, but it’s also more expensive. If you’re looking for more punch out of an E-Class Mercedes, a 396-hp AMG E43 with a 3.6-liter Biturbo V6 is coming in 2017. So is an E400 4Matic station wagon with a 329-hp Biturbo V6, that will cater to an affluent demographic who are probably the same people Jaguar and Bentley are hoping to snare with their new SUVs. It’s a good time to be a car fan, and it keeps getting better.