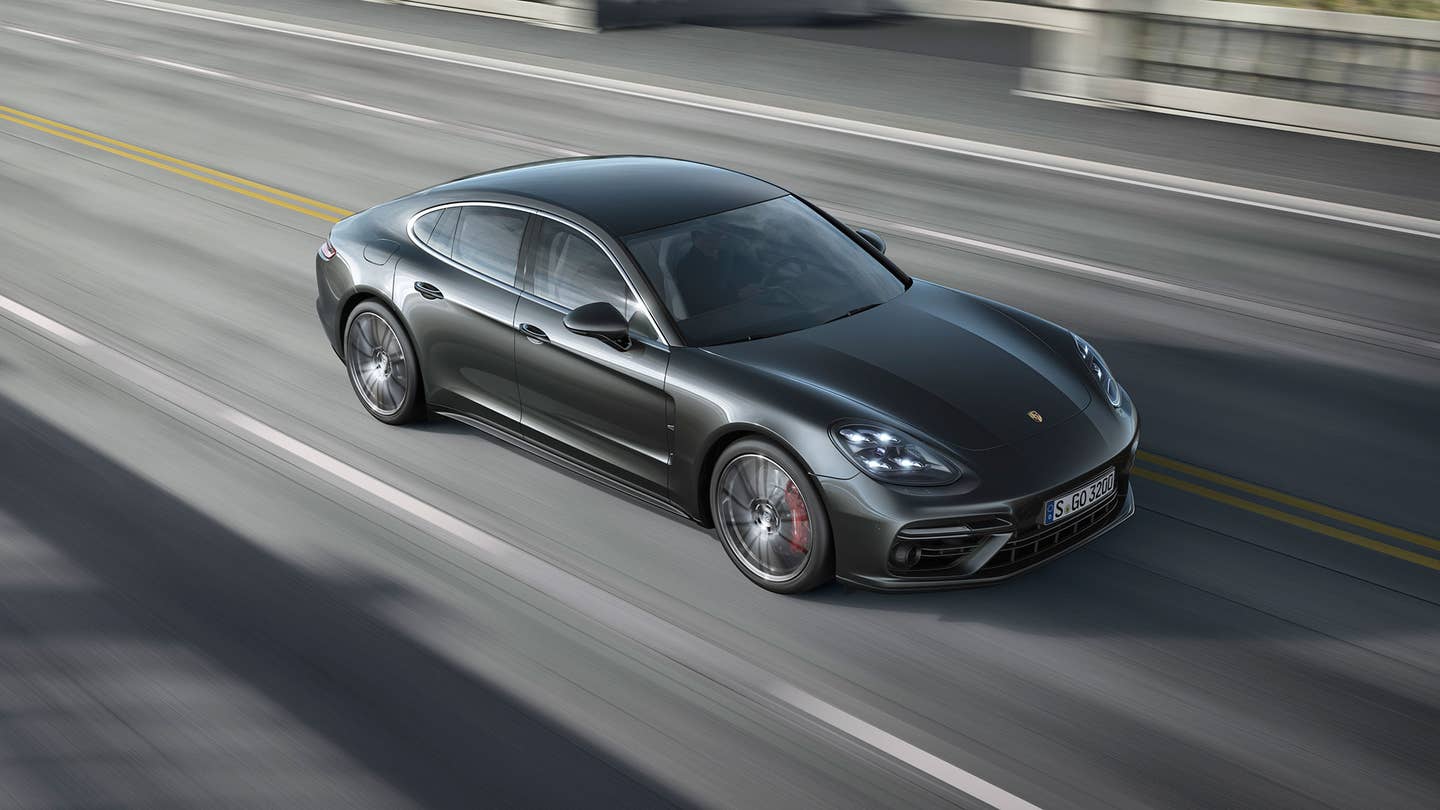 After nearly a decade held back from perfection only by disjointed styling, the Porsche Panamera has finally blossomed into the car it should have been from the beginning: a sports sedan that combines the speed and style of a 911 with the space and comfort of an A8. Sorry, Nissan—all due respect to the old Maxima, but the 2017 Porsche Panamera is the ultimate four-door sports car.

As we've seen in spy videos and leaked press shots alike, the second-generation Porsche Panamera finally has the good looks it's always deserved. The rear end of the roof line has dropped more than three-quarters of an inch—a tiny change that makes a huge visual difference. The four-barrel LED running lights surrounding each head light look sharp as daggers; the nips and tucks to the rear end give it a coherent look that would look at home parked between a 911 and a Macan. Like we said—small changes, big difference.

In the United States, Porsche will offer two variants of the Panamera at launch: a madcap 550-horsepower Panamera Turbo packing a 4.0-liter twin-turbo V8, and a slightly less bonkers but still ridiculous 440-hp Panamera 4S that uses a 2.9-liter twin-turbo V6. (Selected other markets also receive a Panamera 4S Diesel model that makes 422-hp and 627 lb.-ft. of torque, but we won't get that here, because, y'know.) Either way, power flows to all four wheels through a new eight-speed dual-clutch PDK transmission.

Porsche says the Panamera Turbo can crack off the 0 to 60 mph run in 3.4 seconds if equipped with the Sport Chrono pack, while Turbos without it make the same run two-tenths of a second slower; both cars will top out at 190 mph. The 4S with Sport Chrono package will launch from naught to 60 in 4.0 seconds even, while chronograph-less six-cylinder Panameras will do it in 4.2; either way, the 4S runs out of poke at 180 mph. Keep in mind, Porsche tends to be fairly conservative with its acceleration figures, so don't be surprised if the full-blown Sport Chrono Turbo hits highway speed in three seconds flat

The 2017 Panamera is also the first Porsche to feature InnoDrive, a predictive cruise control that sorts out data from the navigation system and the car's radar and video systems to determine ideal acceleration and deceleration rates more than a mile and a half in advance. The system accounts for elevation data, speed limits, and upcoming turns—potentially allowing the car to semi-autonomous take turns at up to 0.7 g.

Inside, the Panamera comes equipped with what the carmaker dubs the "Porsche Advanced Cockpit," which is basically Porsche-speak for "a lot more touchscreens." The old bevy of buttons that defined the first-generation Panamera's dashboard have been largely tossed in favor of black mirrors galore, controlling everything from climate control to infotainment. Even the dashboard is made up of a pair of 7-inch screens—though the traditional analog tach sticks around in the middle, right where God and Ferry always wanted it. We anxiously await the second generation of the technology, which we assume Porsche will name 2-PAC.

If reading all this has you slathering to own one of these überwagens, well, take a number. The 2017 Porsche Panamera goes on sale in the U.S. in January of next year; the $4S starts at $100,950, while the Turbo starts at $146,950. That's a lot of cheddar, sure. But think about it. Once you have a Panamera...do you really need any other car?