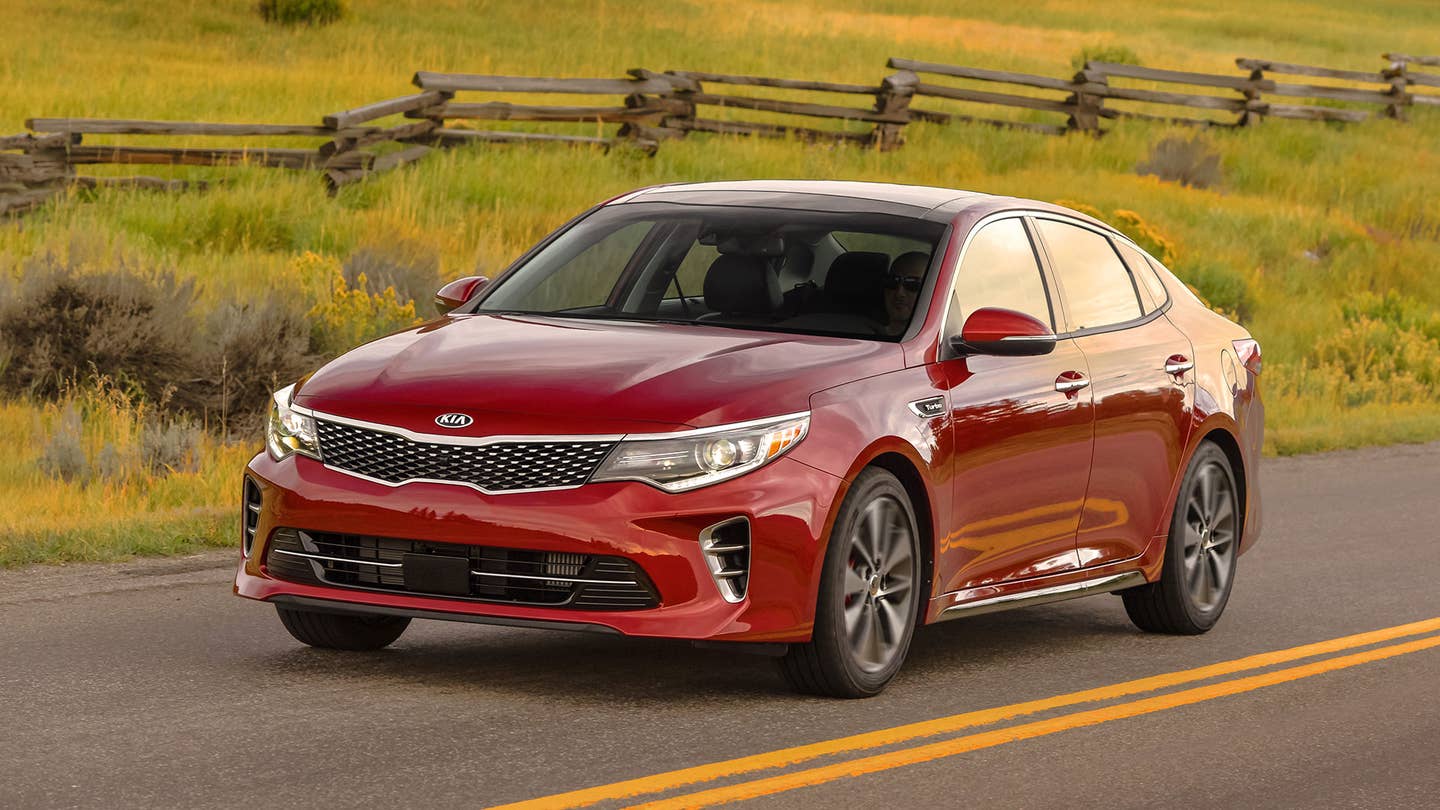 Check your wallet, America. Is there $33,845 in there? Hey, congrats! That will buy 1,300 bottles of Evan Williams Single Barrel, 8,461 Starbucks Ethiopia Yirgacheffe grande pour-overs, or a new car at the nationwide average price. With three-large left in your money clip, you can drive off in a locked-and-stocked 2016 Kia Optima EX, a car that dares you to call it #basic based on its label. Orchestrate a Pepsi challenge against a Lexus ES or Toyota Avalon, and the cameras would record mouths agog with wonderment; with amazement; and in many cases, with remorse.

The chumps who bought an ES or Avalon did not test drive an Optima EX. Had they visited a Kia or Hyundai dealership at all, they’d have eyeballed Cadenzas and Azeras, not a nominal Camry competitor. That’s part of the subversive joy of the Optima EX: it shouldn’t even be in the conversation about entry-level midsize luxury sedans.

And yet, where else could it be? At $30,615 as tested, it's more richly equipped than base-trim ESs and Avalons (for the record, Prolechariot vomits a little every time those names appear here), and its overall execution feels on a par. At 191 inches, it’s the same length as a Camry, but there’s a pleasing corpulence, a sense that the Optima doesn’t care if it comes off a bit zaftig. Weighing about 3,250 pounds, though, it’s still over 300 lbs lighter than an ES.

Maybe we’re just feeling unreasonably appreciative toward the Optima EX, given its trunk did this for us:

And with that, here are the five things you need to know about the 2016 Kia Optima EX.

You might recall last week’s Prolechariot subject, the 2016 Nissan Altima SL. Just because it rhymes with "Optima," however, doesn’t mean it should share a verse, let alone a stanza. Outpacing the Optima EX by $1,500, the Altima is not only pricier, but less polished than this week’s subject.

To be considered a true Prolechariot, a car has to nail the affordability calculation—and the Optima EX puts on a veritable value clinic. The features list in the tested EX is long and deep, so let’s just dignify two rare sights at the $30,000 price point: ventilated leather seats and rear window privacy sunshades. You can affect an unruffled, ass-cooled Seoul chauffeur, and your backseat passenger, unbeknownst to prying eyeballs, is “Gangnam Style” one-hit wonder, Psy.

(Upon further consideration, please don’t do that.)

The polish here runs deeper than any equipment list would suggest. Solidity—the kind that makes a car feel expensive, the kind that eludes most mainstream midsize sedans—has taken up residence in a $30,000 Kia. This shouldn’t surprise keen Prolechariot readers; notwithstanding its unconscionably poor fuel economy, the leather-lined ingot that is the Kia Sportage SX AWD would be an easy choice over an Audi Q3.

2. Father Time Is a Bitch

Prolechariot first drove a third-generation Optima in 2010. Despite how comprehensively that car’s interior and fascias were improved with the 2015 refresh, the sedan’s design can still read Jaguar XJ, minus the finesse

The Optima’s roofline, stretched and arcing toward the rear deck, should write licensing checks to Ian Callum. But where an XJ makes sharp, striking distinctions between chrome, glass and metal—earning a bit of timelessness in the bargain—the Optima relies on a cheap, crimped upsweep behind the rear door to accentuate the roofline’s drama. These upsweeps were a hallmark of the Hyundai-Kia that emerged, emboldened, seven or eight years ago, and they’re looking mighty tired. The corporation’s newest designs, like the 2017 Elantra, forego them entirely. Paging Dr. Evolution: a Kia midsize sedan awaits your scalpel.

3. It Sticks the Landing

Notwithstanding $164,000 dashboard clocks and hot-stone massage seats, the 2016 Optima EX’s interior contains almost everything you’d expect in a luxury car.

An area where the Jag XJ comparisons aren't so jarring: the panoramic sunroof. It’s easily the Optima EX’s richest and most unexpected interior feature, imparting gobs of presence. Multi-textured, soft-touch materials on dash and doors lend visual and tactile dynamism to the mix. The L-shaped gear selector slides into position with a heft that can’t be matched by the electronic joysticks found in Lexuses and BMWs, to say nothing of Toyotas or Nissans. Its engine-start button, rendered in brushed metal, has lettering that glows an Audi-recalling red.

And the external mirrors fold in when you press the door-lock button on the key fob. Properly baller.

Audi lays claim to lighting design. BMW keeps the steering-feel flame flickering. Cadillac is creeping up in the chassis-balance stakes. Hyundai-Kia, meanwhile, is making its play to own ride suppleness.

Prolechariot’s first intimation came in that Sportage SX AWD, and was reinforced by the Elantra Limited. The Kia Optima EX seals it; no carmaker is doing more to create hushed, well-damped rides, full stop. Hit a pothole in an Optima EX and the pothole winces. On the highway, the sedan doesn’t blithely waft along with communication lines closed—you’ll still sense the road surface through the steering rack. But the Optima isn’t a Mazda6 in disguise; the body will roll if flung into a corner. Solution? Don’t do that.

The Optima EX isn’t trying to be your midsize boy racer, anyway. There’s class-competitive oomph down low from its 185-horsepower 2.4-liter four, and the six-speed automatic feels truly robust, scaling up and kicking down into softly defined detents. Our tester's brake pedal had some looseness up high, but it's nothing the dealership shouldn't be able to handle. While there, inquire why the A/C makes a low droning noise on full blast.

The Optima EX is on some sleeper junior-executive shit, more than it would ever get credit for, but Kia doesn’t exactly play the premium card—maybe for fear of muddling the Cadenza’s already suspect business case. Nor does it ring the quality-and-value gong at Camry decibels. Roughly 11,000 Optimas found homes in the U.S. last month, compared to 37,000 Camrys, 28,000 Altimas and (because America) 25,000 Ford Fusions.

It should be selling better. None of the aforementioned cars match the Optima EX for refinement, solidity, or value. They may lord some objective measures over it—that lovely six-speed doesn’t provide for the fuel efficiency of the Altima’s CVT, for example—but the Prolecharian package is otherwise nigh on satisfied.