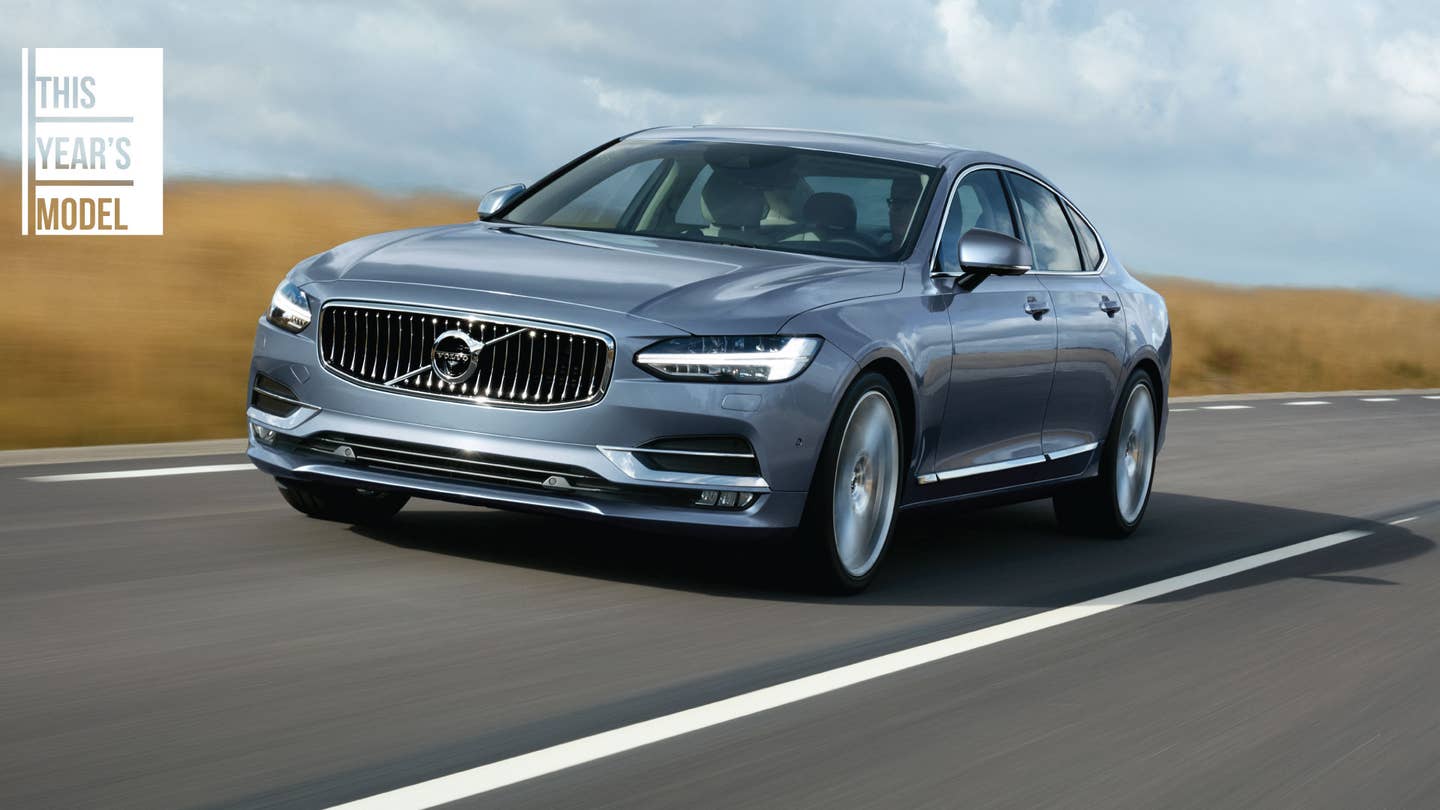 A few decades ago, a Volvo at a Spanish resort would have been a station wagon. Square, a bit battered perhaps, brimful of children and beach chairs. Either that, or it was the gardener’s car.

Here, stretched out poolside on the Costa del Sol, the 2017 Volvo S90 looks so languid and stylish that I half expect a waiter to serve it a sangria. It so matches the Mediterranean backdrop that I suspect Volvo used a color swatch -- coincidentally, “Mussel Blue” is the name of the S90s’ signature paint. The new flagship sedan is flanked by an equally lovely V90 wagon version, which America will see sometime next year. I wish Volvo luck in its bid to divert as many Americans as possible from SUVs. Naturally, no luck is required with wagon-obsessed journalists, who leer hungrily at the cocoa-brown V90s awaiting our test drive.

Appropriately for this summer-holiday setting, “Relaxed Confidence” is the company’s tagline for the S90. I thumb a worn copy of Automotive Euphemisms and find it, right next to the entry on Lincoln’s “Quiet Luxury” – “A luxury car, often of front-drive origin, that seeks to discourage unflattering German comparisons by declaring itself bored by or uninterested in sporting competition.”

Some smooth curves through Andalusia’s rumpled hills quickly confirm Volvo’s definition. The S90 is more relaxation than sport, like lawn darts or bocce. Each can be played with one hand while balancing a drink in the other, without spilling a drop. But if you don’t care about racing more enthusiast-minded sedans – especially the Jaguar XF, Cadillac CTS, Audi A6 and BMW 5-Series – the Volvo ticks luxury boxes like a Tiffany’s cashier. Like the lauded XC90 SUV that shares its SPA architecture, the S90 is as safe, serene and progressive as a Stockholm art museum.

Designers at Lexus, Infiniti and Acura – boring or bombastic, seemingly dependent on their mood that day -- should be forced to take a seminar and copious notes on the Volvo: This is how you design a sedan that looks fresh and contemporary without overwrought gimmicks; elegant and grown-up without monotony or mimicry. Like the new XC90, the S90 will still look handsome a decade from now. Good design is like that.

Signature “Thor’s Hammer” headlamps swing in from the XC90, a tricky packaging challenge whose frosty LED’s bisect the headlamp element, rather than the usual mascara above or eyeliner below. The bright concave grille, with its “Iron Mark” Volvo logo, appears scalloped by a exacting Swedish chef, more Marcus Samuelsson than Muppets.

The sedan takes another airy, clean-ruled page from the XC90 with its interior. If German cars tend toward Berlin techno caves, the Volvo is a Scandinavian OB-Gyn office, a tasteful unisex sanctuary of aluminum, chamfered walnut and leather. Switching medical-practice metaphors, seats seem born from an orthopedist’s doctoral dissertation, encouraging ideal driving posture and supporting you in all the right places. They might be the best thrones in the midsize class. The deeper workings of the stylish, 9.0-inch Sensus infotainment touch screen could be improved, but it’s still worlds better than many luxury rivals. Finally, rear seats could definitely benefit from a taller cushion and added foot clearance; men with Size-12 brogues will be asking front occupants to raise their seats to make room.

Volvo’s scalable SPA platform is part of an $11 billion investment from its Chinese parent Geely, including Volvo’s upcoming plant in South Carolina. That shows Geely’s enormous faith in a brand that, while growing again, only sells about 500,000 cars around the world. (General Motors, a relative giant, dropped $9 billion in capital investment last year). SPA itself begins with one fixed element, a long dash-to-axle ratio that mimics the layout of a classic rear-drive luxury car. That “Dash-to-axle” refers to the distance between front wheels and the base of the windshield and front roof pillars. All apologies to the Mini and other button-nosed front drivers, but longer tends to look better, suggesting a big V8 or V12 under the hood and its attendant power and prestige. If this silhouette was a Rorschach inkblot, the naturally response would be “money.”

Amplifying that shape, the S90’s passenger greenhouse is shoved back 10 inches versus the ancient S80. Window openings are scrunched lower and stretched out along that coupe-like profile. The upshot is a sedan of almost nautical grace, rising low from the asphalt waves. At 195.4 inches, the Volvo noses out Mercedes’ enlarged 2017 E-Class by 1.6 inches, and it’s lower and wider than nearly any midsize competitor.

Not so long ago, a sedan this large and luxurious would have a cylinder count to match. But like a pioneering Audi, then BMW, and now Mercedes, a four-cylinder is what you’ll get – and only four cylinders, in Volvo’s case, with no optional six or eight.

Fortunately, the 2.0-liter Drive-E powerplants are mostly up to the task, especially in the T6 model that combines standard AWD with 316 horsepower and 295 pound-feet of torque. A supercharger helps hustle things along at lower engine speeds, while a large turbocharger gets rolling up high. Volvo cites a 5.7-second run to 60 mph; or 6.5 seconds for the basic front-drive T5 with 250 horsepower from a turbo 2.0-liter sans supercharger.

Telltale four-cylinder frequencies are smartly canceled through the audio system, and the eight-speed Aisin automatic helps keep the engine in its mid-range sweet spot.

Officially, the T5 model should come in around 27 mpg combined, perhaps 24 mpg. But we envision a struggle to match those lofty figures in the real world, as the little four-banger works hard to propel a sedan that weighs 4,080 pounds in AWD trim.

It all makes for a pleasurable cruise through Spain – except for the S90’s power steering, whose electric assist often feels odd and unnatural. It’s like the Ghost of Hyundais Past: An invisible hand seems to clamp and haunt the wheel, especially as you first dial in steering from a straight-ahead course. Twirling the S90’s dimpled metal performance controller through Eco, Comfort and Dynamic settings doesn’t entirely solve the issue. Programming an Individual mode, with steering in “Comfort” and other parameters in “Dynamic,” proved the best compromise for the porridge-thick feel. Spoiled owners may also be dismayed to find a manual control for the tilt-and-telescoping column, with no power option. As with a Corvette, composite leaf springs underpin the rear, which carves out added trunk space; my T6 Inscription test model added an optional rear air suspension and adjustable dampers.

If sporty handling isn’t Volvo’s first game, safety puts it on familiar ground. Volvo was already first with auto-braking systems for vehicles and pedestrians. Now, the S90 adopts a radar- and camera-based system that can brake to avoid splatting various large-animal species; moose being the major threat in Sweden, deer and elk here in the States. Now, if it could just speed up for a jackass Donald Trump, serenity might be assured.

Volvo’s Vision 2020 plan has set of goal of no deaths or serious injuries in its cars by 2020. Tellingly, the company plans to do it without eliminating humans from the driving equation. Yet even Volvo can’t resist the lure of semi-autonomy, with a new Pilot Assist that can help steer the S90 – keep hands on the wheel, please – on the highway.

The system’s underpinning, a conventional adaptive cruise control, ably manages speed and monitors cars ahead. But even when I found an ideal semi-autonomous environment – a slot-car seaside highway with gentle curves and a tall median divider – Pilot Assist had the S90 ping-ponging between lane markers or misreading them entirely, threatening to bash the median or cars in the next lane if I didn’t intervene. Back to the drawing board, Volvo: Tardy, obtrusive and nearly useless, Pilot Assist is well behind the self-steering curve led by Tesla’s Autopilot.

Wobbly pseudo-autonomy aside, the S90 finds Volvo steering a confident course toward legitimacy in midsize luxury sedans. The 316-hp S90 T6 AWD arrives in July for $53,945 in Momentum trim, or $57,245 for the better-equipped Inscription. Bargain hunters can mark September for the 250-hp T5 model, starting at $47,945.

The S90’s arrival should kick off an intriguing sales battle in the rear ranks of the class, like watching talented F1 drivers just off the podium. Anders Robertson, Volvo USA’s product manager for 90 Series models, notes that 150,000 Americans will see their luxury-car leases expire this year. Volvo is aiming to grab a modest five percent of the market. Jaguar’s louche, aggressively sporty XF should have similar goals, along with Cadillac’s slightly larger CT6. Even Hyundai’s Genesis has carved out a modest niche.

People looking to re-up already had to dither between midsize models from Germany, America, Japan, the U.K., Italy and South Korea. To Volvo’s credit, the S90 gives you one more car, and country, to think about.