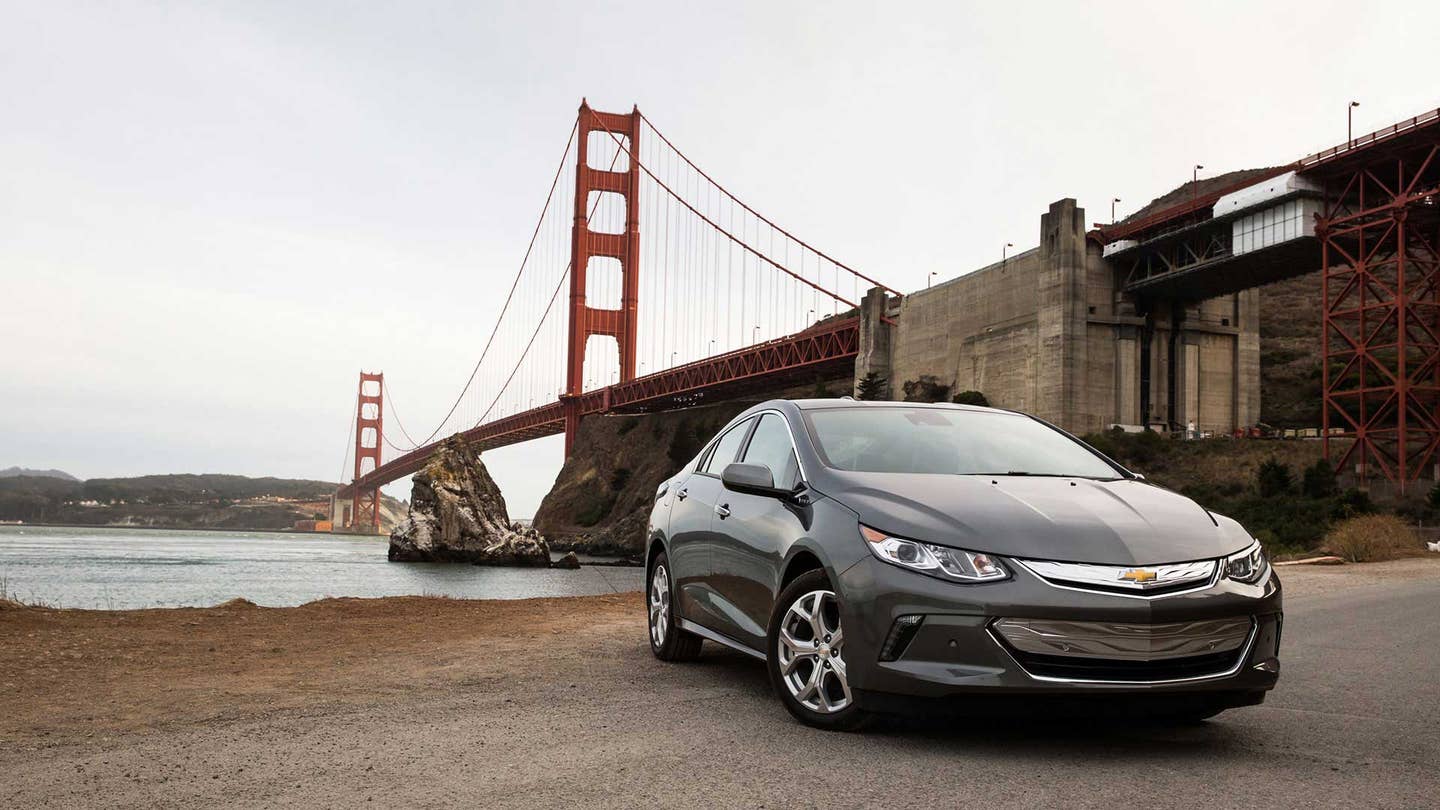 Tesla has its Insane mode. It also has Ludicrous mode, the dialed-to-11 setting that urges the electric Model S P90 sedan to 60 mph in 2.8 seconds.

I’m about to test the Chevrolet Volt’s Idiot mode. That idiot is me. But the second-gen Volt may be the most ingenious electrified car you can buy right now, especially at barely one-quarter the price of the Tesla.

To prove it, I start by doing something stupid: Chasing a Volkswagen GTI, the eminence grise of hot hatches, up the slopes of California’s Mount Tamalpais to see how quickly we can suck the Volt’s lithium-ion battery dry. The Drive's editor-at-large A.J. Baime draws VW duty, and he sets as brisk a pace as the blind curves and eagle-eyed park rangers allow. But instead of spotlighting the new recruit’s flab or hybrid deficiencies, the boot-camp-style test shows the Chevy to be impressively willing and able, from performance to energy savings.

The 2016 Volt’s timing seems godawful. Conked in the head by low gasoline prices, Americans are again suffering (or enjoying) amnesia on fuel efficiency. And no car carries more political and cultural baggage than the plug-in hybrid Volt, which can’t get a fair shake from climate change deniers or those who see the car as the “Obama Express” or the bogeyman of a General Motors bailout. Over five years, Chevy has moved only some 80,000 Volts in the States. That’s not even close to the game-changing churn that GM envisioned.

It hasn’t helped that many people—including a curious older couple who spot our Volt brigade at the foot of the Golden Gate Bridge in Sausalito—still don’t grasp that the Volt is not a full-time electric car that’s largely tethered to a home charger and hometown duty. Instead, it’s a plug-in hybrid (GM insists on “extended-range electric vehicle”) that first runs though a full charge of wall electricity, then seamlessly switches to a tag-team of battery and gasoline power when you’re farther from home. Fill the Volt’s tank and you can cover 420 miles (40 more than in the previous-gen car), or run coast to coast without ever plugging in to recharge, just like any conventional car.

Despite its challenges, the new Volt should lasso more Americans into the plug-in fold. Accept your $7,500 tax bribe from the feds to drive one, and the price starts at $26,495, about $1,200 less than before. This Volt is faster, lighter, notably more handsome and energy-efficient.

How efficient? The Volt officially travels 53 miles on electricity alone, up from 38 miles for the previous version. Those electric, fresh-off-the-charger miles are the Volt’s most efficient, producing the energy equivalent of 106 mpg, or “mpge.”

Even tearing up summits in Marin County, pissing away electrons at a pace that few actual owners will ever attempt, the Volt clocks 37 electric miles before its gas engine was forced to spring to life. From that point, dual electric motors pair with a smoothed and strengthened engine—a 1.5-liter four with direct injection and 102 horses, running on regular rather than premium unleaded—to officially sip at 42 mpg. I saw 45 mpg in both city and highway. Ascending the tight switchbacks of Mt. Tamalpais, the Volt has little trouble matching the GTI’s pace, including a pushbutton Sport mode that gooses throttle response. That might not compute on paper, considering this Volt takes 8.4 seconds to reach 60 mph. That’s about 0.8 seconds quicker than before, yet the GTI dispatches 60 mph in well under six seconds. But the Volt now squirts from 0-30 mph in 2.6 seconds, just two-tenths behind the 220-horsepower VW. The Volt’s 0-30 and 0-60 mph times, by the way, are quicker than any of VW’s currently distressed TDI diesels.

The coolest new bit is the left-hand steering wheel paddle that engages regenerative braking to capture and return energy to the battery. Flying down the backside of Mt. Tam, I grabbed the regen paddle like a monkey after a banana. The paddle slows the vehicle, mimicking engine braking, by sending its kinetic energy to an electric motor that reverses operation to act as a generator.

“There’s not a gasoline, diesel or conventional hybrid car that can touch that number.”

Next, it was time for a solid-citizen run. On a gentle yet hilly cruise from Sausalito to Point Reyes and back through Petaluma, I chalked up 106 total miles and used precisely 1.02 gallons of gasoline, along with $1.50 worth of electricity. Coincidentally, the Volt’s battery holds a half-gallon’s worth of gasoline energy. So if you do 53 miles on a charge, you’re getting the official 106 mpge. Put another way: At current unleaded prices, I drove 106 miles for a total outlay of $3.80. There’s not a gasoline, diesel or conventional hybrid car that can touch that number, or the combined 70 mpg that I enjoyed between gas and electric miles.

Even at the conservative 53 miles of official range, the typical American commuter could drive the Volt to and from work without ever using a drop of gasoline. And of course, the more you charge the Volt and the less you rely on gasoline, the closer you’ll get to a real-world, no-BS 100 mpge or more.

Add the always-available battery boost, and the improved two-motor drive unit ramps up a maximum 149 horsepower and 294 pound-feet of torque. Packaged entirely below the floor, the T-shaped battery grows to an 18.4 kilowatt-hour capacity but with only 192 lithium-ion cells, versus 288 before, boosting efficiency.

The new engine is quieter to begin with, and its higher power rating allows it to operate at lower rpm. Since the Volt’s powertrain operates much like a continuously variable transmission, divvying power through a set of dual planetary gears, the engine still drones a bit when it’s working hard, but it’s far less obtrusive—more like the hum of a Cessna, three cornfields over. 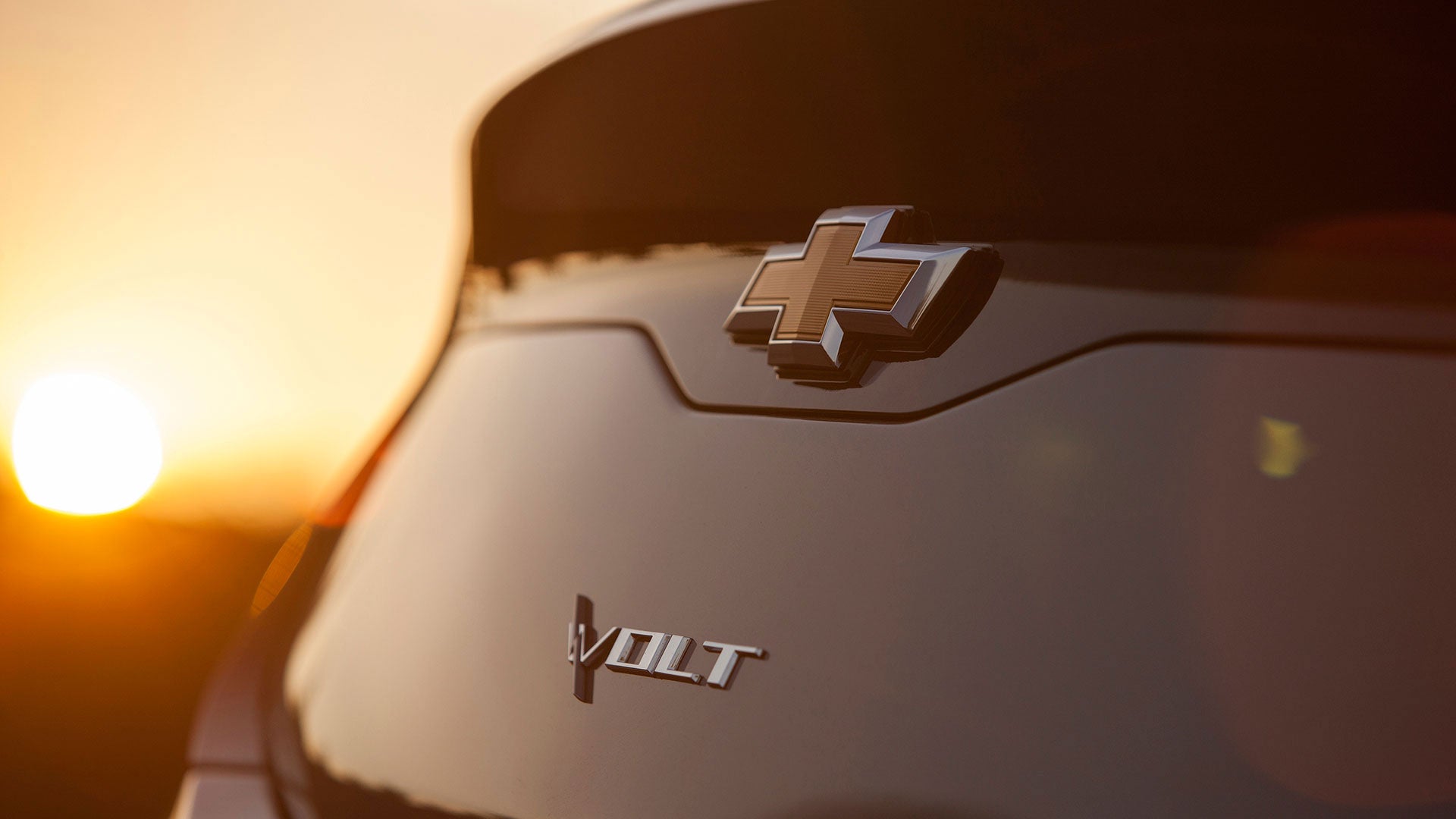 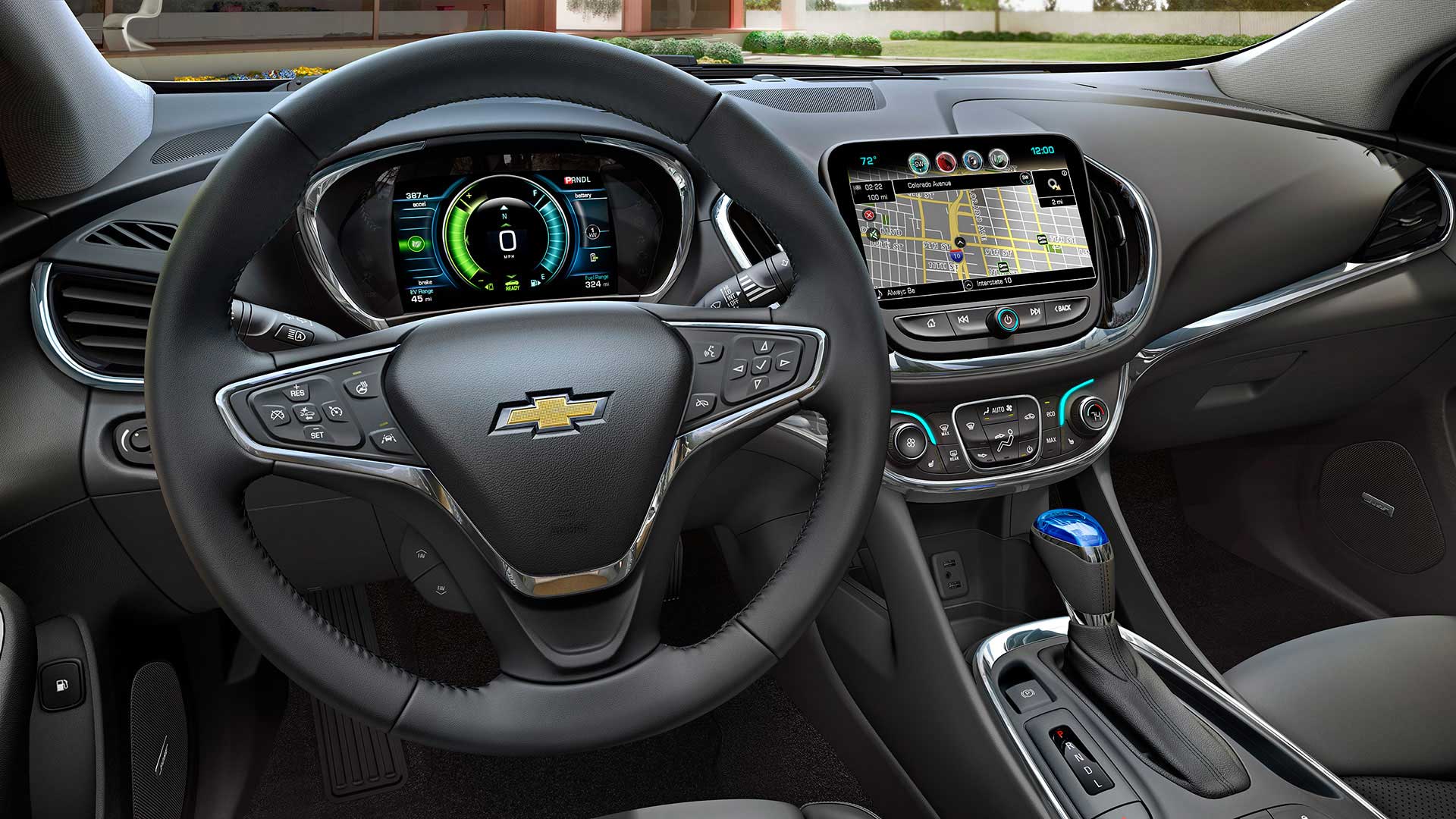 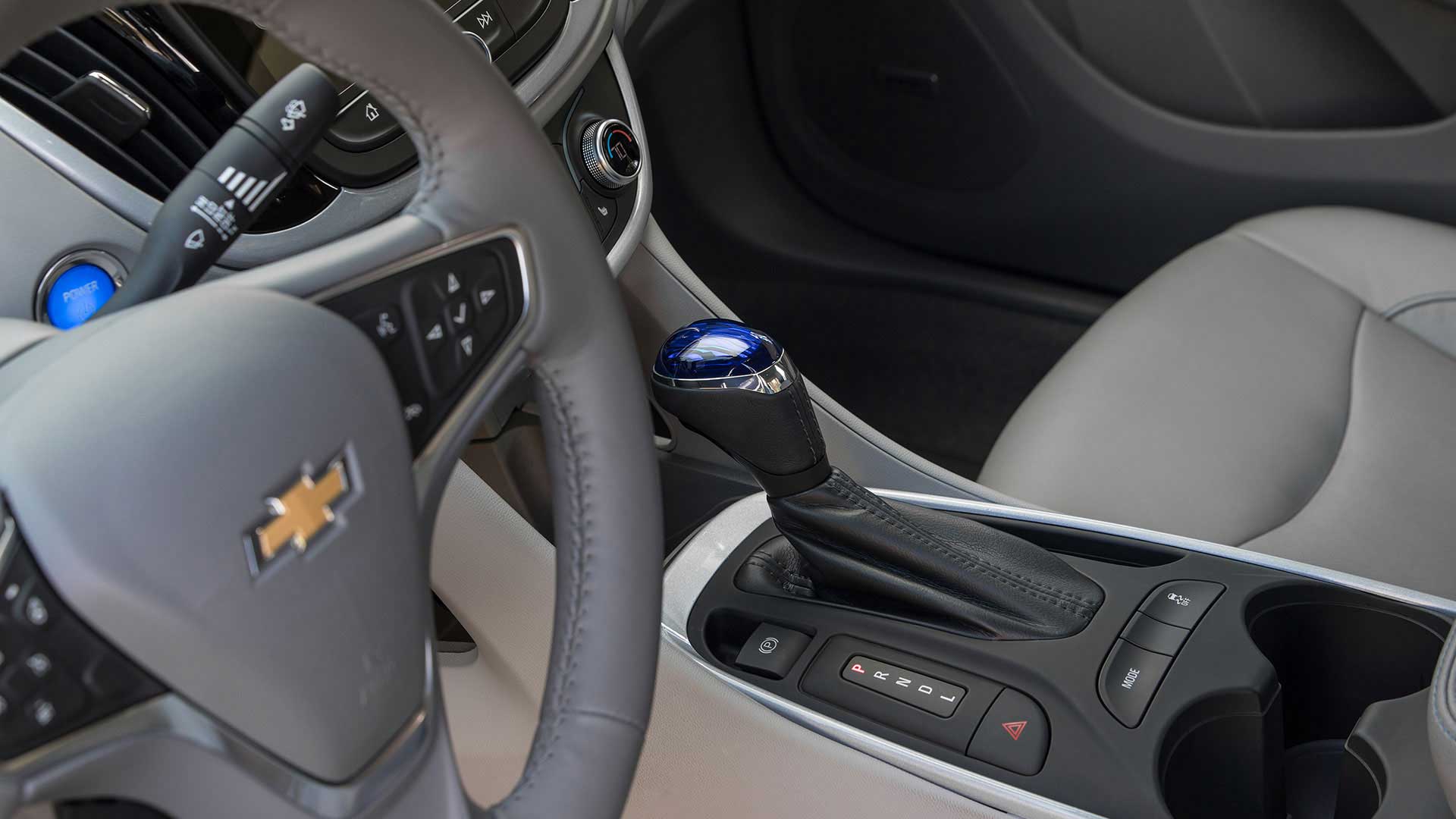 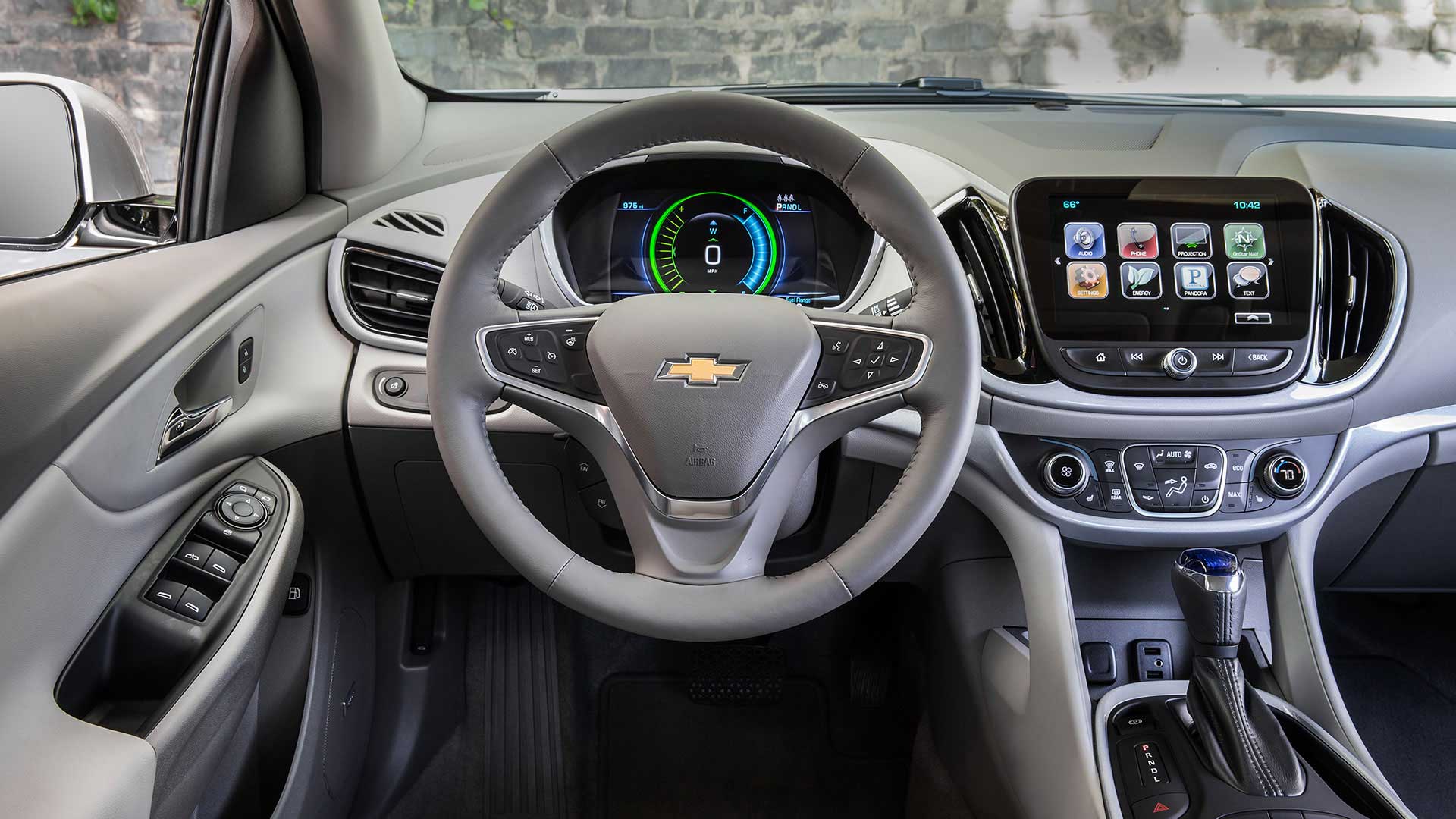 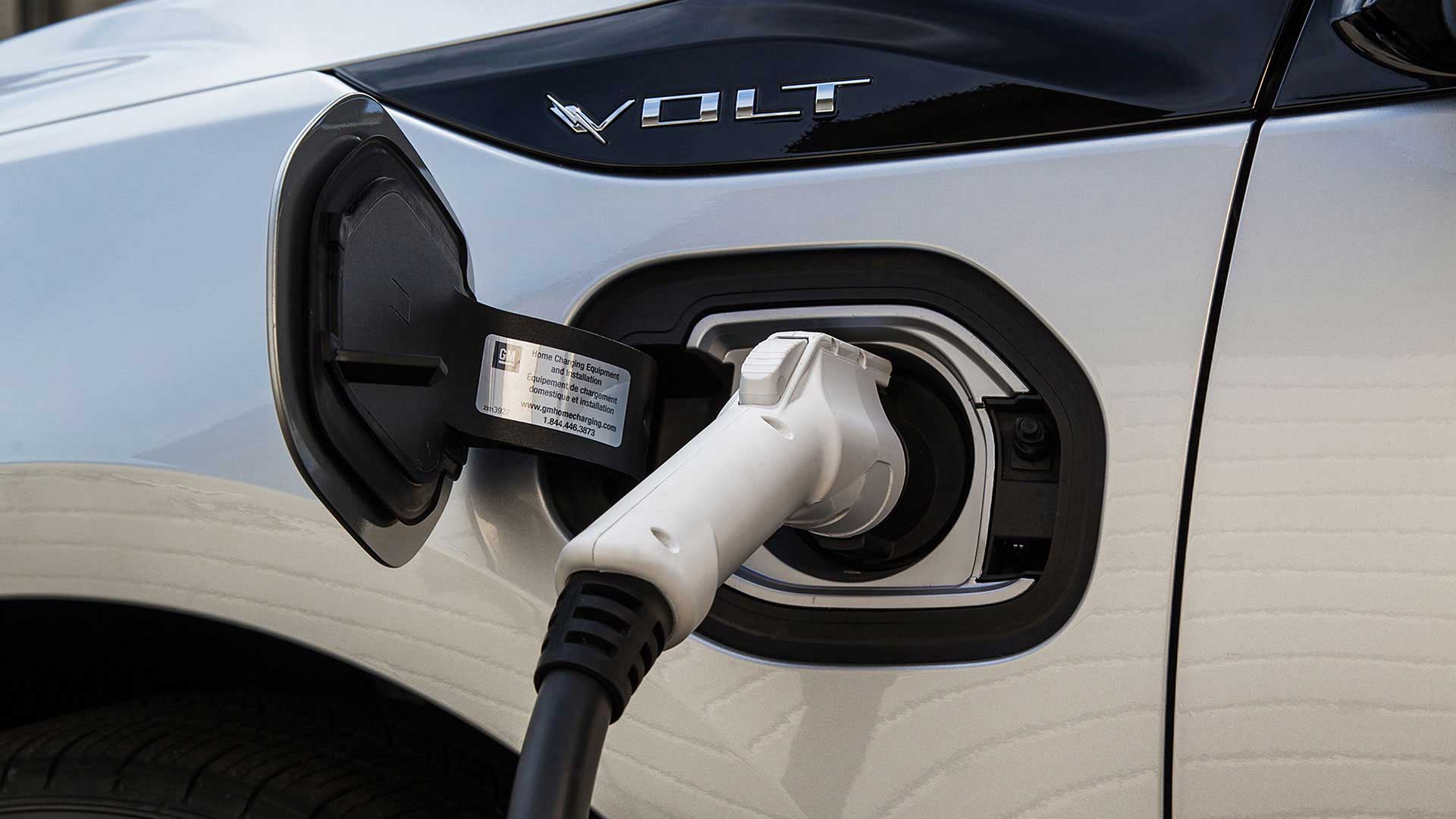 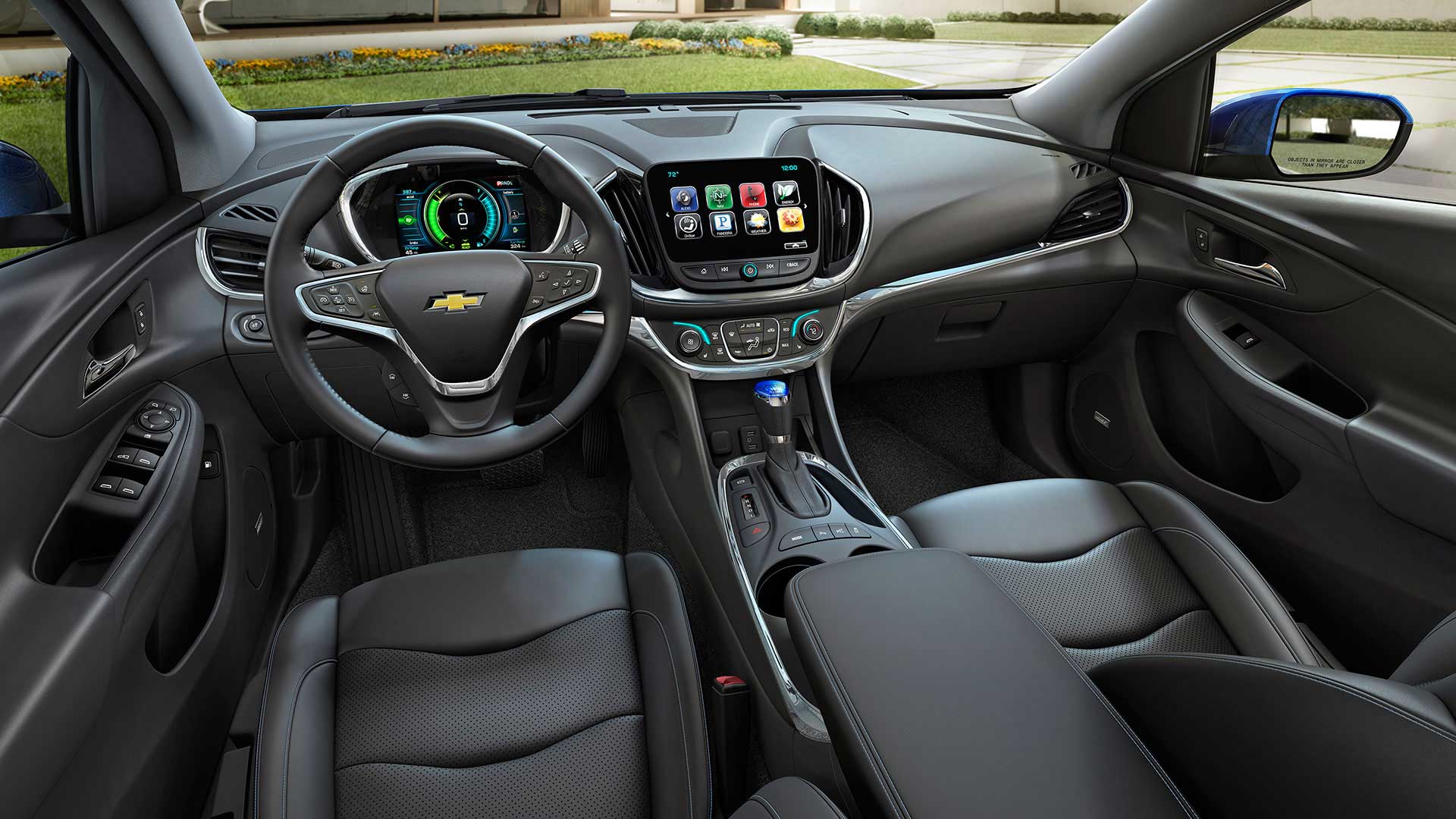 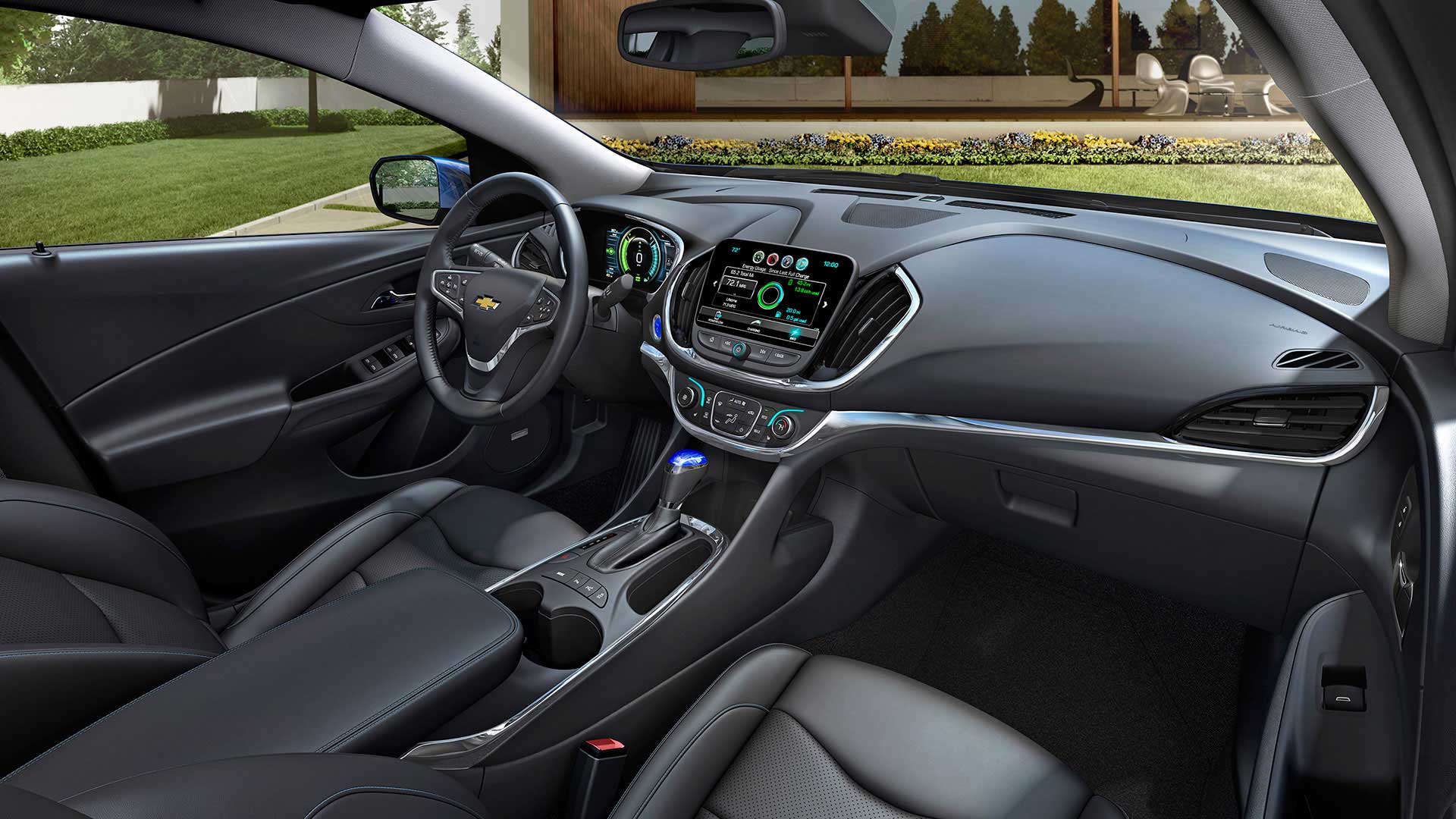 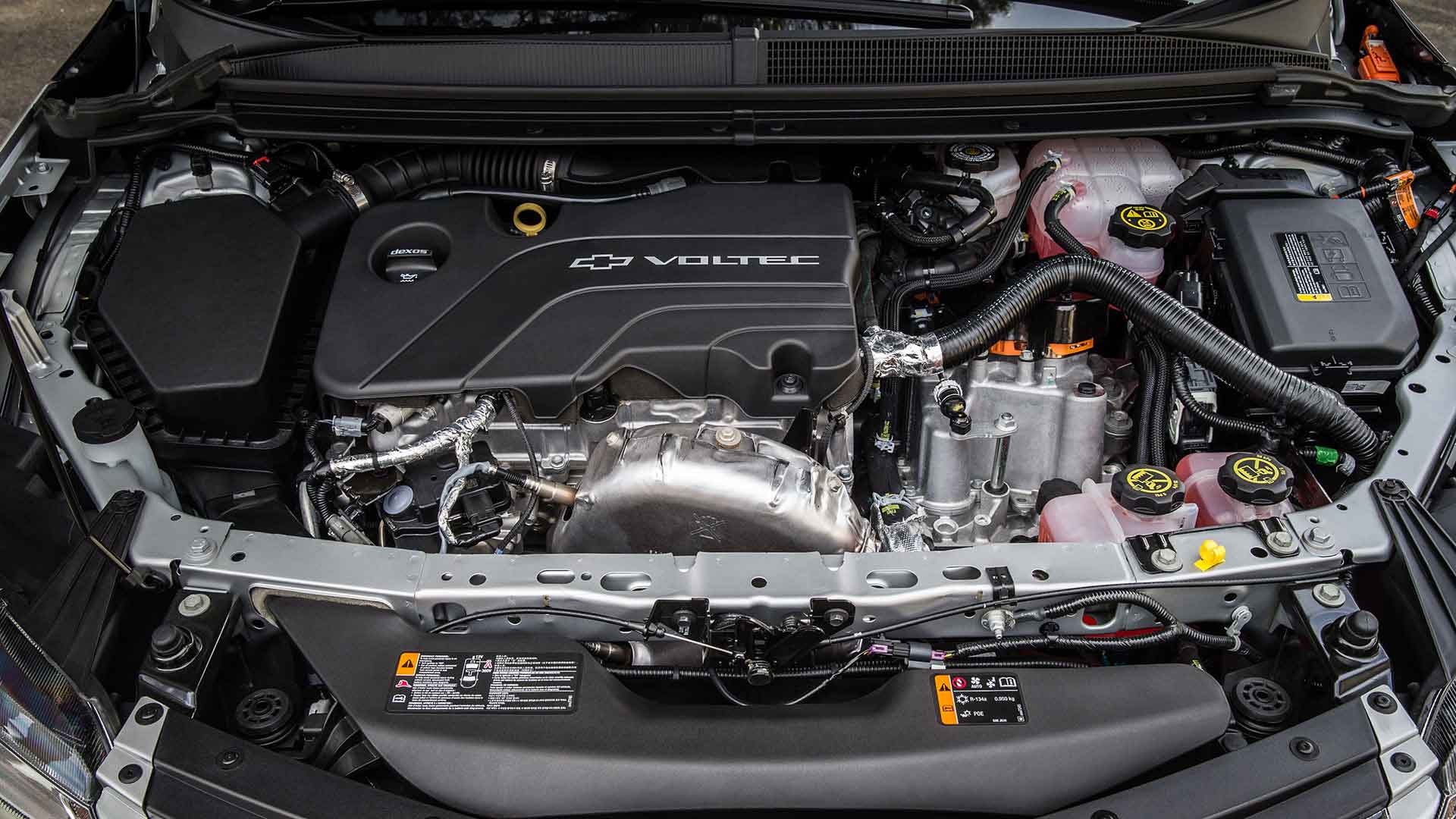 Tipping scales at 3,543 lbs, the Chevy is more than 200 pounds lighter than its predecessor, with 100 of that saved in the propulsion unit alone. It feels more sprightly, with nicely chosen weight for the electric steering—not much feel, mind, but the experience is never less than pleasant.

Thrown squealing into curves, the Volt’s fuel-saving, low-friction tires were its clearest performance disadvantage versus the GTI. Girded with more aggressive rubber, this Volt would do itself proud in twisty sections, while likely only losing 1 or 2 mpg.

The Volt also looks more like a car, and less like a self-conscious statement from a GM science fair. The soft-boiled, contemporary styling recalls the Honda Civic, or vice-versa. That’s not a bad thing. An ersatz chrome fascia is an unfortunate design choice, despite new active grille shutters that pivot closed to reduce aerodynamic drag at higher speed. But the rear end is honestly handsome. I parked alongside a Nissan Leaf to grab a coffee, and the Volt made the Leaf look like a barnacle on the S.S. Greenpeace.

The Volt gets better inside as well, ditching the gimmicky dash that recalled an old Blu-Ray player. Operating the old flush-mounted capacitive controls was like waking a passed-out drunk: lots of finger prodding, little to no response. Here, a new eight-inch touchscreen display reclines on an attractively rendered dashboard, and combines eminently useable controls with a rich black digital background. There’s now a little padded central perch in back to allow a fifth passenger, but it’s strictly for short hops.

With its new style and stamina, I like this Volt’s chances. I’d like them more if gas were $4 a gallon. But even as GM sells Silverados and Escalades like so many potato chips, Americans will have to tighten their belts someday. When that happens, cars like the Volt will seem anything but a fad diet.