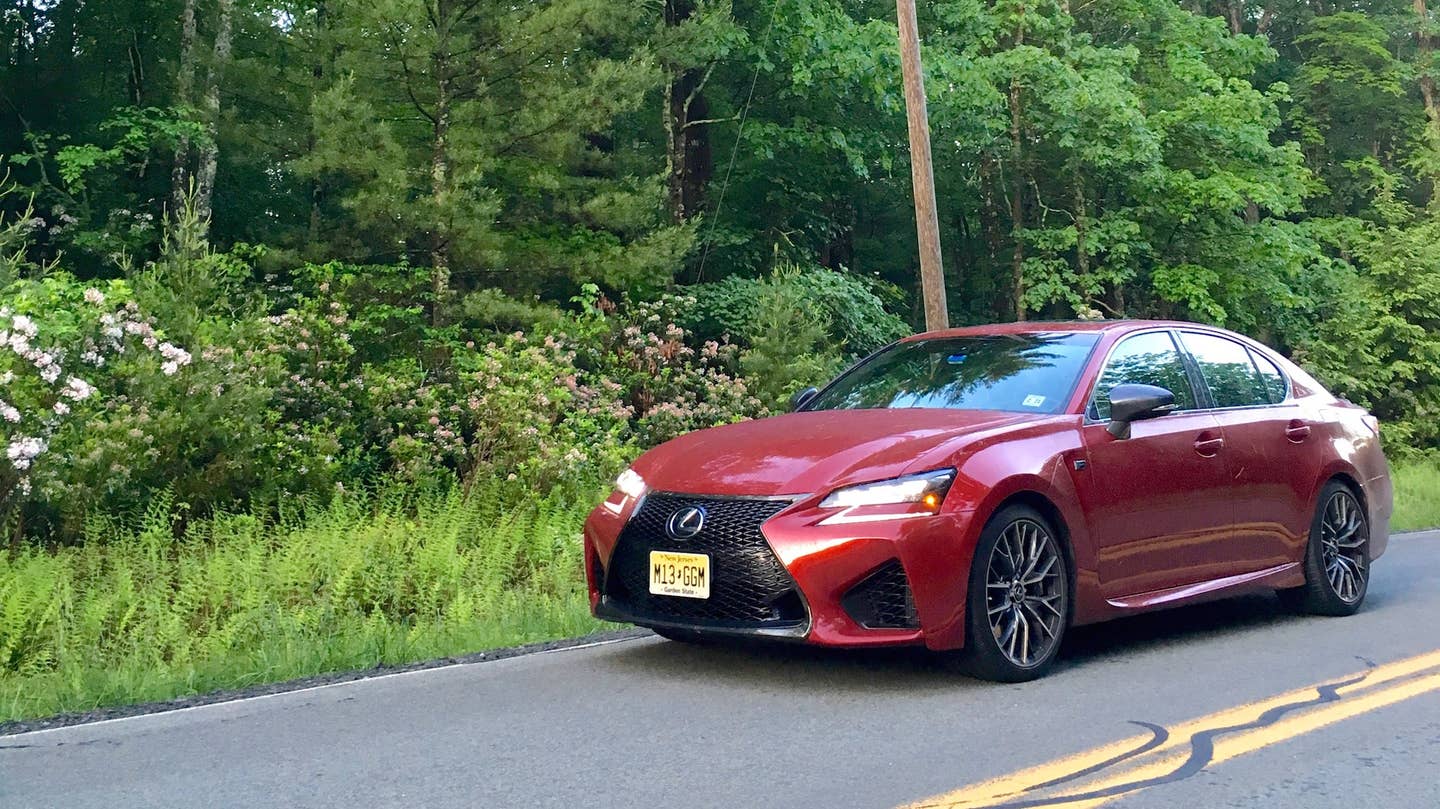 I’ve struggled to love Lexus’ current lineup, mainly because the brand’s vehicles tend to be fussy in the execution of both their styling and their ergonomics but fuss-less in their road manners. The GS-F is not a full departure from this, but it’s as close as Lexus comes to creating a balanced, sporty car (for now, though the LC and LF-FC look very promising). Finally.

It still has the yawning spindle grille that looks like it fell out of a 19th-century textile mill. It still has gaping gills that appear to have been grafted on by Dr. Moreau. It still has a profile that appears to have been 3-D printed by someone who started with a Panamera (front) and ended with a Camry (rear). And it still has Lexus’s patented (and patently maddening) leather Ouija infotainment controller, a hybrid of a Herman Miller Eames ottoman and a hover-board. It's about as easy to control as a huddle of beery Hell’s Angels at a Trump rally.

What it does have going for it is a pleasurable power-train and a preternatural poise. The former is a bawling, naturally aspirated V8; once the de rigueur blunt solution to creating a Q-ship muscle sedan used by the storied likes of the BMW M5 and the Mercedes's E63, now the sole upsized, eight cylinder, non-turbo- or super-charged motor in the category. (You could get a Chevy SS, but that’s not quite in the same league.) The latter is the result of a trick torque-vectoring rear end, the inner workings of which I’m far too mechanically challenged to comprehend, but the seat-of-pants/palms-of-hands performance of which is immediately evident. On curves and corners, this big lug sticks around like Bernie Sanders.

This engine and suspension combo is also found in the slightly smaller, slightly lighter, significantly shorter-wheelbased RC-F, where it felt more peaky and skittery. Maybe I just dislike coupes. (Actually, I do dislike coupes.) The extra length and practicality give it balance, whether on a late night, double dinner date with three other elegant queens, or an early morning bomb from my country house out to JFK. I can’t honestly say I’d pick it over a contemporary E63, because I’d still have to look at it from the outside, and the inside, but if I could enter and drive blindfolded and with all infotainment permanently pre-set and hardwired to my brain, I might consider it.

Which begs the larger question regarding the GS-F. One of my companions, on our way to dinner, asked me “Who is this car for?” And while I usually have available some snappy response—the 36 year-old second husband of a successful orthopedic surgeon; a retired New York City fireman; four middle-aged gays going to dinner—I couldn’t think of anything but, someone who would want a sporty Lexus, a tautology reflecting a figment.

Mercedes went through an equally baroque styling exercise in the last decade, and they’ve pulled out of it beautifully. From what Lexus has shown of its future product, it seems possible they’ll do the same. “Ask me again in three years,” I told my friend.

We know it’s an April Fools’ Day gag. We still like it.