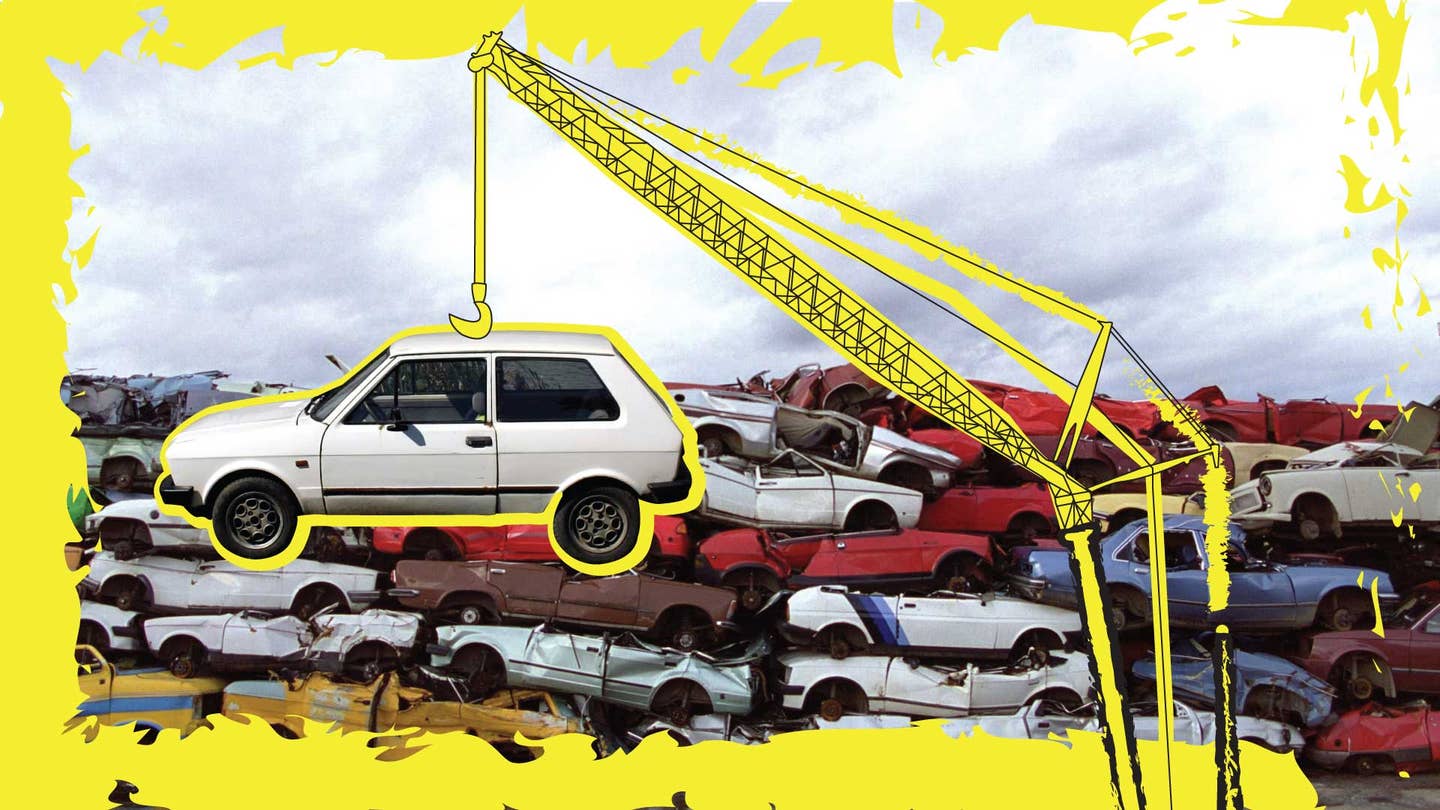 I'm an auctioneer and part-owner of an auto auction, and I've seen thousands of pieces of rolling trash on a weekly basis. Trade-ins that owners no longer wanted regularly arrived by the trailer-load. In my hometown of Atlanta alone this numbered well over 40,000 cars—every month. I also co-developed a quality study, with statistician Nick Lariviere, called the Long-Term Quality Index.

By watching tens of thousands of these cars come and go, I started to recognize some predictable patterns. There were four unique things that separated "built to last" cars from those “built too fast.” I nicknamed those characteristics the Four Horsemen Of The Carpocalypse. They are:

I call it NARC, for short. The first two are always the owner's fault. Some people are human hurricanes that wreak havoc on everything they come into contact with. Houses. Cars. Computers. If there's a button that can be pressed or a key that can be turned, this unique group of absent-minded souls will find a way to obliterate it. In the auto auction business we call them "Kevorkians"—people who can turn even the most reliable cars and trucks into two-ton paperweights.

Then there are the things the manufacturer controls, like susceptibility to rust, which is becoming an increasingly rare issue thanks to improvements in chemicals and steel polymers.

Finally, there's what can only be described by the non-scientific among us as "crap."

Every car has a little crap in it. Most automobiles are built out of tens of thousands of unique, individual parts of varying quality. When the a carmaker decides to cheap out on a few of those parts, it means either you or another unfortunate future owner might pay the price for that crappy, penny-wise-pound-foolish decision.

Sometimes the defect is small. Other times it can be expensive, even fatal. When I changed sides from auctioneer to car dealer, I began to receive a painful, first-hand education in how truly terribly these cost-cutting choices could exacerbate as the years rolled on.

For example, “lifetime" transmission fluids that seemed to always wear out past the warranty period, without any legal recourse. Cheap plastic parts, like intake manifolds and radiators, that would leak over time and turn the engine into a recyclable hunk of metal. At the auto auctions, where defective cars number in the thousands, we saw those cars everyday. But for the most part, people only really hear about the non-fatal issues if they happen to friends or family.

In early 2013, I decided to do something about it, and co-developed, along with statistician Nick Lariviere, the Long-Term Quality Index. Instead of owner surveys—which rely on inexperienced people, most of whom have no mechanical background—our long-term study used certified, independent mechanics who spend years poking around underneath, and under the hood of, used cars. We decided to also expand the visible life cycle of the car; instead of a "long-term" study that only focuses on a three-to-five-year span, we expanded it to 20 years, because at the time the average vehicle on the road was nearly twelve years old. Tomorrow's beaters are now merely middle-aged, and many of them have plenty of years left.

After three long years, we now have over 1,070,000 vehicles in our database. What did we find? For starters, most of the myths surrounding the long-term quality of certain cars and trucks are exactly that—myths. Some cars known for quality are not worth their metal, while some unpopular models endure. More importantly, we’re seeing that the quality gap between manufacturers is widening, not narrowing, due to some automakers' increasing use of CVT transmissions, direct injection technology, and turbocharged engines—all of which can have fatal flaws.

Here, based on our research, are the ten least reliable used cars on the market today.

What happens when you install a modern transmission that has trouble handling 5,000-plus pounds of heft? You end up with thousands of unhappy owners who can be left with a $5,000 repair bill. The GMC Acadia, Buick Enclave, and the recently defunct but mechanically identical Saturn Outlook have transmission defect rates that range from 15 to 20 percent or more, depending on the model year. If you shop for an older one, make extra sure that the fluid has been serviced, and/or the transmission has been replaced.

By just about any imaginable standard, Volkswagen has had a tough year. However, the Jetta exemplifies the Jekyll-and-Hyde nature of models that use multiple types of engines and transmissions.

If you like older diesels, manual transmissions, and avoid turbos and direct-injection engines, the Jetta can be a solid car. If you must have an automatic, forced induction, or direct-injection, don’t opt for Volkswagen's compact sedan. That sea of pink in the defect ratio table, below, reflects an average failure rate of well north of 20 percent—more than twice that of other compact cars.

Sometimes a cheap car can be quite expensive. The Kia Rio has experienced chronic reliability issues that are (surprisingly) spread quite evenly between the engines and transmissions. There are also other, cost-related issues with the Rio that make it a not-so-cheap car in today’s new car market. For example, timing belts that need to be changed every 60,000 miles, versus most of today’s new cars that use timing chains or belts with 90,000-mile intervals or more. And the 100,000-mile transmission fluid service schedule on the most recent models seems, frankly, a bit optimistic.

When you install Chrysler’s most problematic and expensive modern transmission, the Jatco CVT, into a heavy compact SUV like the Jeep Patriot, you end up with a rolling headache. Like the Dodge Caliber and Jeep Compass, the long-term quality issues afflicting the Jeep Patriot, which has been sold since 2007, remains far above the industry average.

Beyond consistently high defect rates, the Smart ForTwo suffers from an incredibly short period of ownership, with buyers typically kicking this car to the curb before it even hits 60,000 miles. Although our study doesn’t penalize cars for having low mileage at the time of trade-in, the Smart ForTwo seems to be that unique faddish car that just doesn’t offer the quality needed to make it a long-term keeper.

Sometimes a low rating has to do with competition. In the case of the 7-Series, BMW suffers from going up against the Lexus LS, the highest-rated car in our study, and the Mercedes-Benz S-Class, which has been a surprisingly durable car for much of its four-decade history. Unfortunately, the 7-Series has the dubious honor of consistently offering worse-than-average reliability in the full-sized luxury car market since 1996. If reliability matters to you, don’t buy one.

The Beetle is a near mirror image of the Jetta thanks to similar powertrains between the two models. However, the Beetle does tend to have more cars equipped with a Volkswagen automatic, which pushes the level of trade-ins with defects above 20 percent. Like the Jetta, a non-turbo or an older, non-recalled diesel model with a manual transmission is a better bet.

When it comes to cult brands, MINI is in a league of their own. Unlike Fiat, MINI has been able to keep a strong enthusiast following along with an army owners who are incredibly pleased with their car—until it breaks. Then it gets expensive, and traded in. With 2,500 trade-ins and a stunningly high 22.7 percent defect rate for a brand just introduced in 2002, the MINI Cooper has the dubious honor of having a quality level of less than 1 out of 100, compared with its competition. What could be worse than that? Well, there is one more vehicle out there that sits even below the MINI.

Until Chrysler decides to extend their warranty or provide some type of financial assistance to those who have seen their $20,000 crossovers turn into immobile junk, we advise consumers to avoid Dodge Journeys in general, and the four-speed, four-cylinder powertrain combination in particular.

Want to see how your vehicle ranks? Click here to find out.