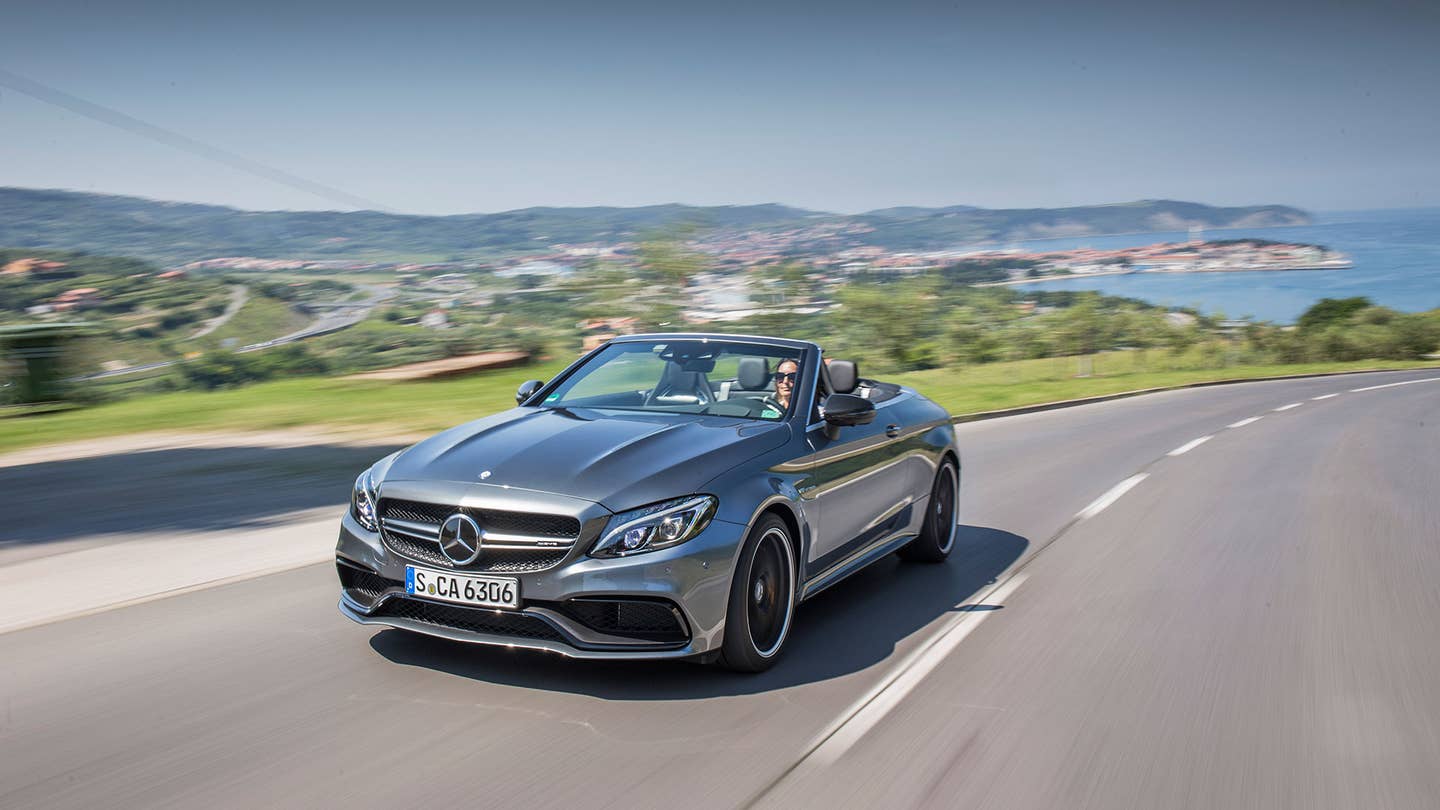 Last week, under Mercedes’ munificence, I drove the new Mercedes C-Class Cabriolet across several Italian highways and through a dozen Slovenian villages, and found it a perfect joy. Even amidst a whirlwind of excess—truffles in Trieste, duck in Dobrovo—the C offered fun without an existential hangover.

I'll explain. Sometimes, driving the ultra-luxury set—Bentleys, Rolls-Royces, the upper Benzes—can tax the soul. It is a champagne problem that mostly hits the slender, offbrand-Cava class of people who now and again drive (but will never own) the highest-end luxury cars: participants in Miami exotic car rental programs, valets, and automotive journalists. A writer driving such a pleasurecraft can feel drowned in a river of global capitalism whose currents he has yet to harness. It’s seeing how the other, smaller percentile lives, and even as you thank your lucky tri-pointed stars, you do start to wonder if perhaps it wouldn't be worth the effort to assassinate some Russian oligarch, introduce yourself as his American love child, and claim an oil field or two. The things we do for love of money.

In their perverse generosity, luxury automakers like to play up this temporary experience, heightening “pain” as they provide more pleasures. On a press trip, you slip from business class flight to luxury hotel, then, after a night of drooling, through a breakfast buffet table piled with smoked salmon, the sweetest cherries, and butter with a higher cost-per-pound than wrought silver. Some, forgetting their guesthood, start acting like full-time inhabitants of such rarified surroundings, and begin demanding different rooms or special booze. Others never shake their deeply set American middle-class anxiety with service, terrifying waitstaff with the misplaced, obsequious "thank you!" and lingering chats that boil down to apologizing for being there. Few are well-adjusted.

Thankfully, Mercedes’ new C-Class Cabrio is bracing and real. There was solace to be found driving it. It’s pretty and expensive, but accessible enough that you feel reasonable indulging the lustful thoughts it provokes—instead of buying a poster, you might bookmark the online configurator. Snuggled in its red leather seat, you think: with a little work, I too might someday find a foothold on the vertiginous rock face of transcontinental wealth. Low, among the more cowardly mountain goats, but there all the same, with the wind in my hair and AirScarf warming my upper spine.

Most dreamable is the C300 Cabriolet, coming to America with standard 18-inch wheels, a 9-speed transmission and a 245-horsepower, turbocharged four-cylinder engine. It’s pretty and lithe (for a car that hits the scales at 3,850 pounds), and by the standards of any previous era, quite quick. Like the coupe on which it’s based, the C300 Cabrio is graceful and cohesive, showing the BMW 428i to be a bit of a creased Bavarian plum, and the Audi A5 cabriolet an aging idol. Also like said coupe, the sounds it makes are a little disappointing. Why is the VW GTI the only sonorous turbocharged four-cylinder out there?

Walking up to a gleaming white example with twenty-inch multi-spoke wheels ripped from the S-Class, the dominant impression is of opulence. Unlike more muscled models up-range, the C300 would choose a beach cruise over a mountain sprint every time; like the 280SL Pagoda of the early Seventies, it has a few trappings of athleticism, but the temperament of Louis XIV. Inside, leather, matte-finish wood, and brushed metal soothe like the interior of a fancy shrink’s office, and of the many buttons, I could already see the go-to choices. Those would be the auto climate toggle, plus the holy trinity on the center console: the roof button (hold for 20 seconds), the all-windows-up button, and the Aircap button. The last is a combination of mesh screen and roof-mounted spoiler that prevents buffering in the cabin, even at highway speeds. It works—the only strain in your voice will come from yelling epithets at the C63 Cabrio driver that just roared past you in a cloud of glee.

Because, yes, the C300 is quick by old standards: 0-62 mph in 6.4 seconds, like a ‘76 Ferrari 308GT. But then, the long sword was quite imposing before the musket came along. And in terms of controlled explosions, the C63 AMG is a missile al fresco. Where the C300 looks a little gawky with its big chrome shoes—a child in his mom’s Dansko clogs—the C63 has a perfect stance. It wears AMG’s best wheels since the Monoblocks: deeply-dished, black, and with five split spokes and a chrome lip. These are huddled beneath fenders that have each been flared a full 2.5 inches. Out back, four (decorative) trapezoidal exhausts shout a mighty thunder. In front, a gaping, mesh-covered intake leads the C63 the air of a whale shark ravenous not for plankton, but for speed.

Driving excitedly (but gingerly) over Slovenian country roads (the beautiful nation has yet to bequeath its secondary roads with even a centimeter of shoulder) an entirely divergent personality emerges. If the C300 is old-school luxury—graceful, unobtrusive, coddling—the C63 is ludicrous, loud, and too powerful; near-frustrating in its potential. That visual superiority sets the stage for a much more beguiling experience. At turnover, the “hot-vee” turbocharged V8 rumbles as if it weren’t 2.2-liters down on the old 6.3-liter naturally-aspirated AMG motor, though engineers noted that the exhaust was tuned a couple of decibels down from the raucous C63 coupe so as not to give passengers tinnitus. Inside, there’s so much carbon fiber it’s as if, lacking a cow, Mercedes caught and skinned a Lexus LFA.

The C63 drives like its older brother, the SL63: heavy and fast. This small convertible weights over 4,200 pounds, but it’s a car that counts among its myriad grandparents the 280SE convertible, the 300SEL 6.3, the AMG Hammer, and the E320 Cabrio—none a featherweight. Steering is direct, brakes heroic, and unlike the mid-level, 4Matic-equipped C43 AMG, the C63 comes only in rear-wheel drive. It likes to shake a little tailfeather, even on the aforementioned Slovenian roads/ribbons. It’s triple-sensual: beautiful, sonically bracing, and spleen-flatteningly fast. Like the AMG GT, the C63 AMG S Cabrio has 510 horsepower, active motor mounts, and cylinder heads topped with cubic zirconium. It crackles and pops like a box of Rice Crispies that’s been doused in gasoline and set aflame. Caveats? The 7-speed Speedshift transmission is showing its age, with a now-and-again clunk and head-snapping engagement at partial throttle. Rumors suggest a new one is on the way.

For all its drama, the V8 is the one to recommend, even though it stretches the definition of “accessible.” It’s a value proposition in that it brings topline AMG magic down to the human realm. While the C300 Cabrio is an excellent $55,000 car, the C63 is a superlative vehicle for around $70K, with looks and performance of a car double that price. (For maximum is-that-an-S-Class swank, get the dark red, padded top from that car, the selenite grey paint, and the saddle leather.) Its eight-cylinder engine stands alone in the class, and that’s an anachronism worthy ponying up for—grab it, before Mercedes realizes it’s offering its best wares to the (upper middle-class) hoi polloi, pulls up stakes, and hoists everything juicy past the $100k barrier.

The C63 (don’t bother with the “S”) is so superior a car to the C300, so curvaceous and enraged, that to toodle around in the four-cylinder version would be like dancing with a cardboard cutout of person instead of the squishy, fallible thing itself. To the working (that is, not hedge-funding) class for whom cash flows in a trickle instead of a deluge, the C63 Cabrio is your corner of the sky. You’ll have to save up, but once your hands hit the Alcantara, you’ll feel like the hero you are, not a pretender. At least, I did, somehow.