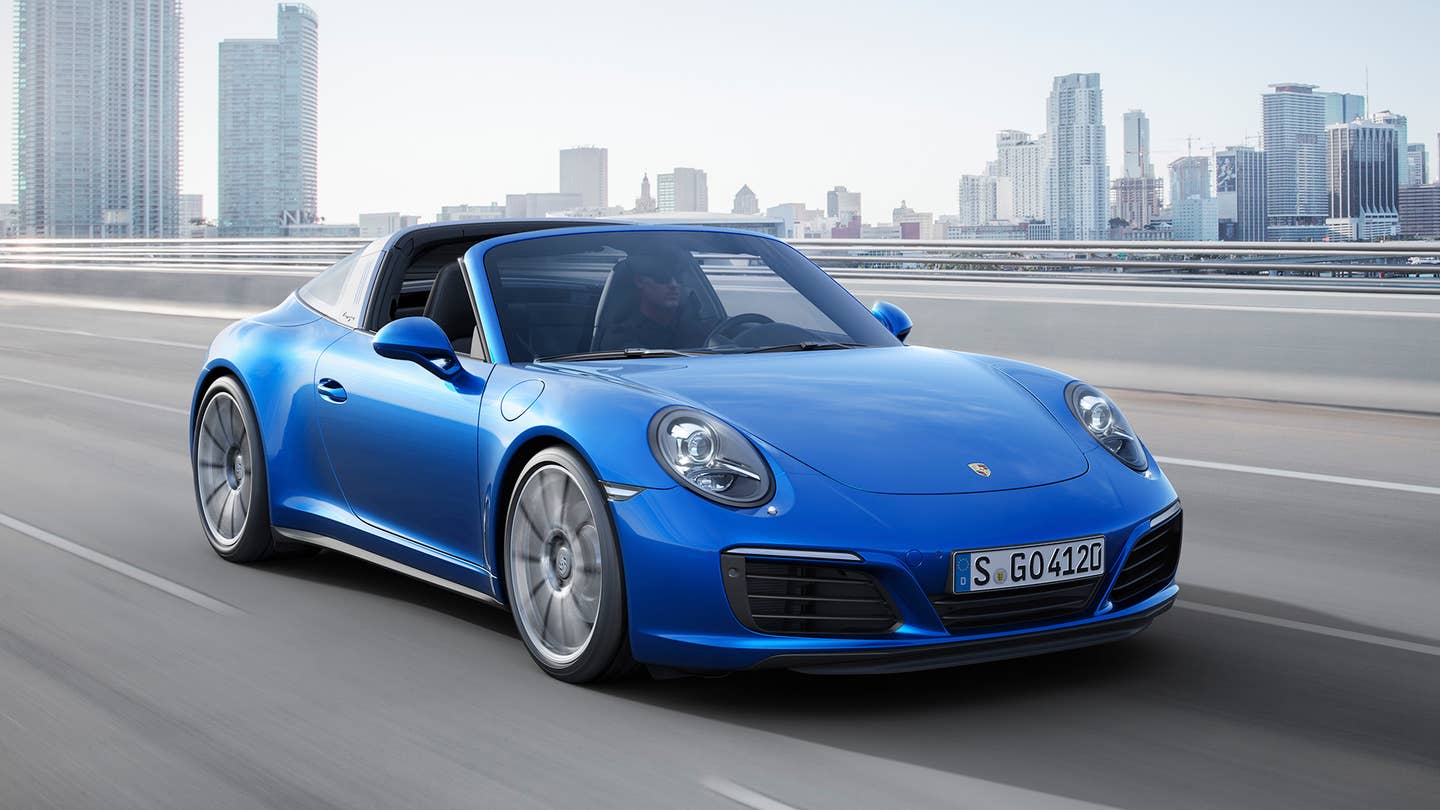 The sky has not fallen. Apocalypse has been averted. Turns out, the newly-turbocharged 911 is just another Porsche—but stronger, faster, and more efficient than the one it replaces.

That’s one verdict from our street- and track test of the 2017 911 Targa 4S, which we got our hands on before anyone else in North America. The other verdict is that, since every 911 now shoots into six figures, you might consider going all-in for the Targa body style. It’s the prettiest and most versatile Porsche in the reworked lineup. The tantalizing silver targa bar and bubble-back glass add new dimensions to the 911’s classic shape. It’s the rare 911 that makes even jaded New Yorkers go wild, especially when its roof unwinds with a dazzling complication, like a Swiss moonphase watch. And when the Targa performs that act, it shows clear advantages over the pricier Cabriolet; top up or down, the Targa preserves a coupe-like roofline that’s less roughly circumcised than the Cabrio’s. There’s less wind buffeting, too, since only the driver and passenger are exposed—so little that you can hear a seatmate’s seductive whisper even at 80 mph. Burbling toward New York’s Catskills for hot laps at Monticello Motor Club, my race gear filling the jump seats, I had an epiphany: In the full Cabriolet, where's the sense in sunning a glorified parcel shelf that will almost assuredly never carry a human? Unless you care to broil the luggage and leather, there's really no point. Plus, the Targa pushes just 44 extra pounds versus the Cabriolet, and 198 more than a Carrera S coupe. Easy trade-off.

With the Targa’s body heat covered, let’s talk turbos, plus everything else under the 911’s reworked skin. Nearly every body panel is new, but you won’t notice until you park the new model (codenamed 991.2 for this mid-cycle upgrade) alongside the old. Twenty-inch wheels and tires, including 305-wide rubber hunks at the rear, stuffed the Targa’s arches full to bursting. They look glorious, and they grip like mad.

Porsche first plopped a 911 Turbo atop its lineup in the ‘70s, but this, with its big, whooshing, 3.8-liter flat-six, is not that Turbo. We’re talking the garden-variety 2017 911 that finds Porsche preaching the downsizing gospel, leaving disciples to wring their hands—and not in prayer. The first standard turbocharged engine in the 911’s 53-year history serves up more horsepower, torque, and, yes, fuel economy than the naturally-aspirated engines it replaces. Yet its six flat-lounging cylinders displace just 3.0 liters, making it the smallest 911 motor since the Eighties.

The potential crisis, as with the earlier evolution from air- to water cooling, is that the things that make a 911 a 911—the raucous sound, fingersnap throttle response, and high-revving character—would be watered down like a cheap well drink. But Porsche clearly anticipated that this 911 would face the harsh glare of fans and flashbulbs alike; it sure as hell wasn’t going to attend a controversial premiere with its fly unzipped and ketchup on its tux.

So while turbos have been known to strangle sporty sound, Porsche clearly worked overtime to amplify the 911’s metallic rasp and bark. A sound symposer pipes natural-induction frequencies into the cabin, and with the targa roof stowed, you can definitely hear the turbos whoosh and whistle. But Porsche also programmed fuel overrun that produces throat-clearing exhaust backfires virtually every time you ease off throttle. Every run through the Brooklyn Battery Tunnel was a tenor chorus of staccato pops off the fluorescent-lit walls. My sense is that these lowercase-t 911 turbos are actually more aurally aggressive than last year’s models, especially with an optional, button-operated sport exhaust system that’s nearly a must-have.

Power and performance also execute a neat judo toss of any criticism of Porsche’s methods. Well, mostly. Base 911 models get a healthy 370 horsepower from their rear-mounted 3.0-liter. The S models, including every Targa, combine larger turbine compressor wheels with revised pistons and engine programming to deliver 420 horsepower. That’s 20 more than the 3.8-liter six that powered last year’s S versions, with a lustier upgrade in turbo torque.

With its standard all-wheel-drive and optional PDK automatic transmission, the Targa 4S sprints from 0-60 mph in 3.8 seconds. You’ll wave goodbye to last year’s PDK-equipped naturally-aspirated version, at 4.2 seconds. This demi-convertible is only 0.2 seconds slower to 60 mph than the Carrera 4S coupe. Top speed rises to 187 mph, up from 182.

For me, hustling a 911 to redline is as habitual as a lab rat pressing his morphine button. There’s still pleasure in chasing the 911’s 7,500-rpm redline, but it’s honestly not as pleasurable—or necessary—to wring it out: Horsepower crests at 6,500 rpm and max torque is crouched low between 1,750 and 5,000, as you’d expect in a turbocharged engine. But, once again, Porsche saves the day. The throttle is more sensitive than an Oberlin poetry major. Turbo lag is nearly undetectable, a new technical high (or low) in the automotive realm. As Mike Spinelli noted in his /Drive video review of the 911 Carrera coupe from Tenerife, a credulous driver or passenger might never realize that turbos are huffing below deck:

My own 911 would be manual or nothing, yet there’s no guilt in the 7-speed, dual-clutch PDK automatic transmission. No paddle-shifted gearbox, not even Ferrari’s, has smarter logic. Tearing around Monticello’s full 4.1-mile circuit, I imagined some miniature, genius mathematician—let’s call him Albert—buried within its cogs, furiously scribbling algorithms that always seem to choose the proper gear. I’ll never stop touching those short-throw alloy paddles, road or track, because the changes are so sickeningly fast and fluid. But Porsche continues to remind us that even its professional drivers set their fastest track times by sticking PDK in “Drive” and never touching the paddles—which of course frees you to concentrate on your vision, line, steering, and braking, the things that really shave precious seconds. Larger brakes include 16 percent more pad area up front, or choose optional carbon-ceramic stoppers, direct from the 911 Turbo.

As part of Porsche’s acronym stew, including PASM (for Porsche Active Suspension Management), my Targa featured a new Sport mode for its stability management system, which allows the 911 to get friskier before electronic angels reel it in. This Targa also adopted the useful rear-axle steering that was previously found only on GT3, GT3 RS, and Turbo 911 models. That system trims 1.6 feet from the car’s turning circle, helps the car scrabble out of lower-speed turns, and ensures stability when you’re really flying. As on the GT3’s, I could really feel the system at work, including on Monticello’s puckering Kryptos corner, a nearly flat-out hill crest where the steering rear wheels helped smooth the tricky left-right transition.

And now to the grousing. The optional GT Steering wheel has a welcome, 15 mm-narrower diameter. No issues with its hand-flattering rim and leather wrap. But its dismaying, plasticky upper spokes and extruded Sport Response button—which dials up performance programs—look and feel like leftovers from a tuner car.

The Targa, the company says, is available exclusively with all-wheel-drive because many buyers see it as a four-seasons car. Yet the open-air Targa also seems the quintessential 911 for California, Scottsdale, or South Beach—places where I’d definitely forego the weight and expense of AWD.

Speaking of money grabs, the Targa 4S started from $123,650. But such niceties as a $4,280 Bordeaux red leather interior (hey, gotta match that sweet red roof); a $3,200 PDK transmission; $2,590 front axle lift system; and the $6,810 package with Sport Chrono, Sport Exhaust, rear-axle steering, GT steering wheel, and Sport Design mirrors boosted the freight to $149,970. At that price, maybe this Porsche is a capital-T Turbo after all.

Mortgage issues aside, this Porsche 911 once again leaps a technical chasm, ignores rubberneckers who’d love to watch it fall, and comes out clean on the other side. As for this Targa 4S, I love it in part because it’s so honest about the Porsche’s mission. Joke all you like about orthodonists in 911’s, but the fact is that the typical 911 owner buys it as much for grand-touring style and luxury as for performance.

You dream about a GT3 RS? Who doesn’t? But the Targa, once the butt of similar jokes, suddenly forges an argument as the best all-around 911, perfectly pitched between aspirational dream and daily reality. When you can feel the breeze at up to 187 mph, and look this good doing it, you know this 911 is special.