Jeep's wild new concept packs Hellcat power into a Wrangler box. And we drove it. 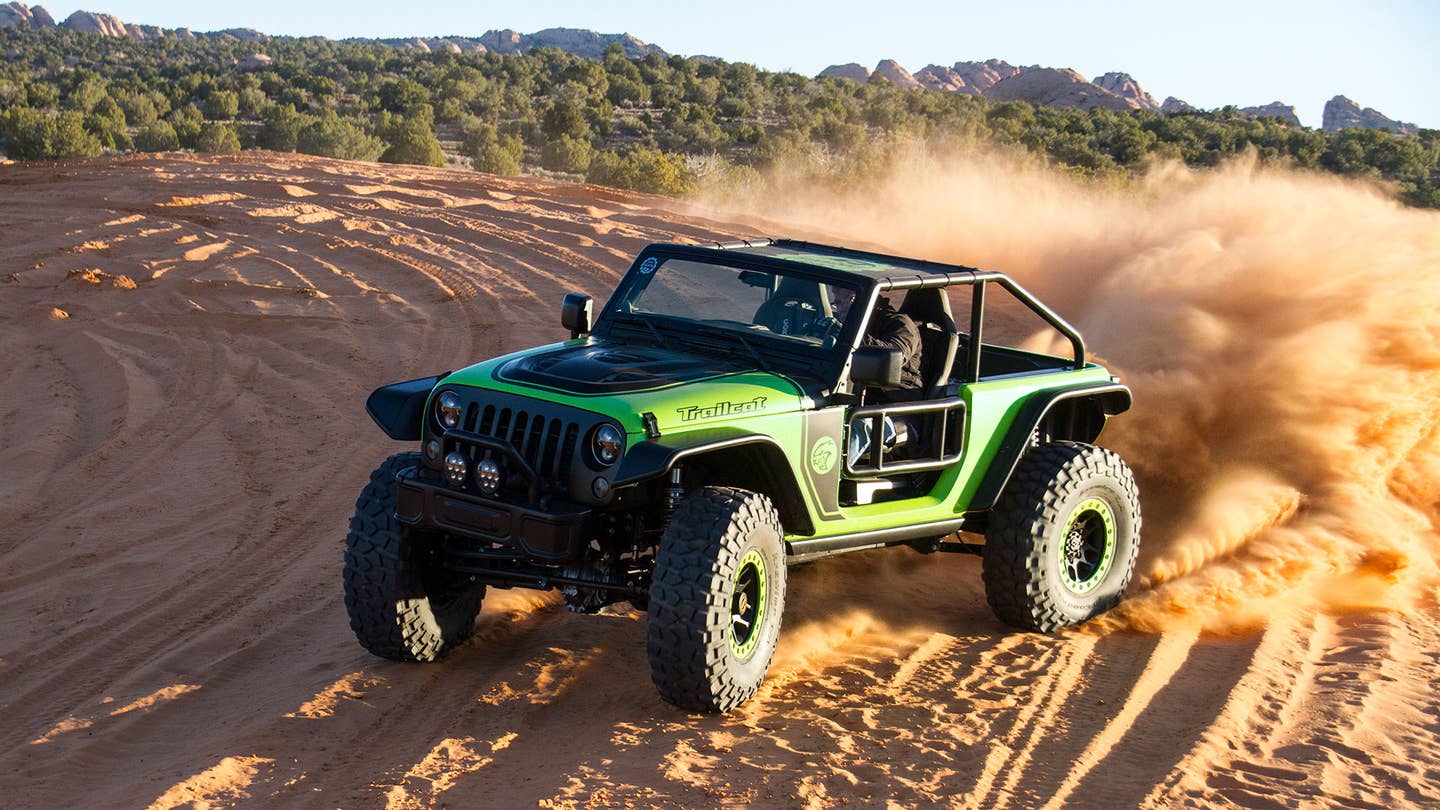 Each spring, Jeep's finest fans gather in Moab, Utah, for the Easter Safari. Atmosphere? Somewhere between an off-road jamboree and a cult meeting. And you'll find Jeep's own engineers there, too, ladling out Kool Aid in the form of original concept vehicles; the star of this year's Easter Safari is the wild Wrangler-based Trailcat. Our West Coast editor, Chris Cantle, was in Utah covering the event when Jeep threw him the keys. Thirty minutes. Go drive.

Before anything else, there’s a loud whine. The fuel pump. A mechanical insect’s whir that's out of place in the stillness of Moab. And then ignition. Seven-hundred-something horsepower's worth of combustion, supercharger whine, and lunatic wonder. A shouted expletive in this red rock cathedral, or maybe a reverberating hallelujah. The Jeep Trailcat speaks our language.

To be clear: This is a concept vehicle. An off-road-ready, well-realized (frighteningly viable) idea made tangible. Something that’ll trundle over precipitous ledges and gaps with ease; that can creep on low gears and 39” tires, or roost a whole beach of sand into the sky on a lark. Its windshield is cut-down and rakish. Taught proportions and big fender flares make it a looker. In the driver’s seat, strapped in by four-point belts, you don’t feel dashing so much as combative. Inside the Trailcat, you’re ready to make a meal out of everything around you.

Out on the Utah slickrock, a photographer waits at a ledge. Just feet ahead, the Jeep’s invisible, hidden by a long, bright green hood that’s been bored and sculpted to accommodate and aspirate a massive 6.2-liter V8 and blower. Gentle feathering of the clutch puts those monster tires on the lip; gentle feathering of the brake lowers them over the edge. The rort and rumble alone sends pebbles airborne like dust. It takes leaning out over the tube-frame door to grasp the transition into space, meaty coil-overs make it feel like nothing. The photographer’s bold, getting so close.

Slickrock, then a dusty trail. It’s too easy. Because the Trailcat is a pussycat at low speeds. Easy on the throttle. Not too heavy on the clutch. Familiar, languorous shifts through the six-speed gearbox, it’s a delight with the threat of fear. Really, though, the Trailcat begs for miles of wet beach, or the steep leeward side of a dune. Or a wildass jump off a town hall staircase. It begs for trouble, to be cracked wide open. To strain that massive fuel pump so hard it glows. A half-hour with the Trailcat isn’t enough. A week wouldn’t be either. Because a Jeep this mean? What a concept.