The New Audi A4 Brings Brains and Beauty Instead of Brawn

It's no match for the Cadillac ATS or BMW 3-Series in the stat box. Can design and tech make up for a lack of brute strength? 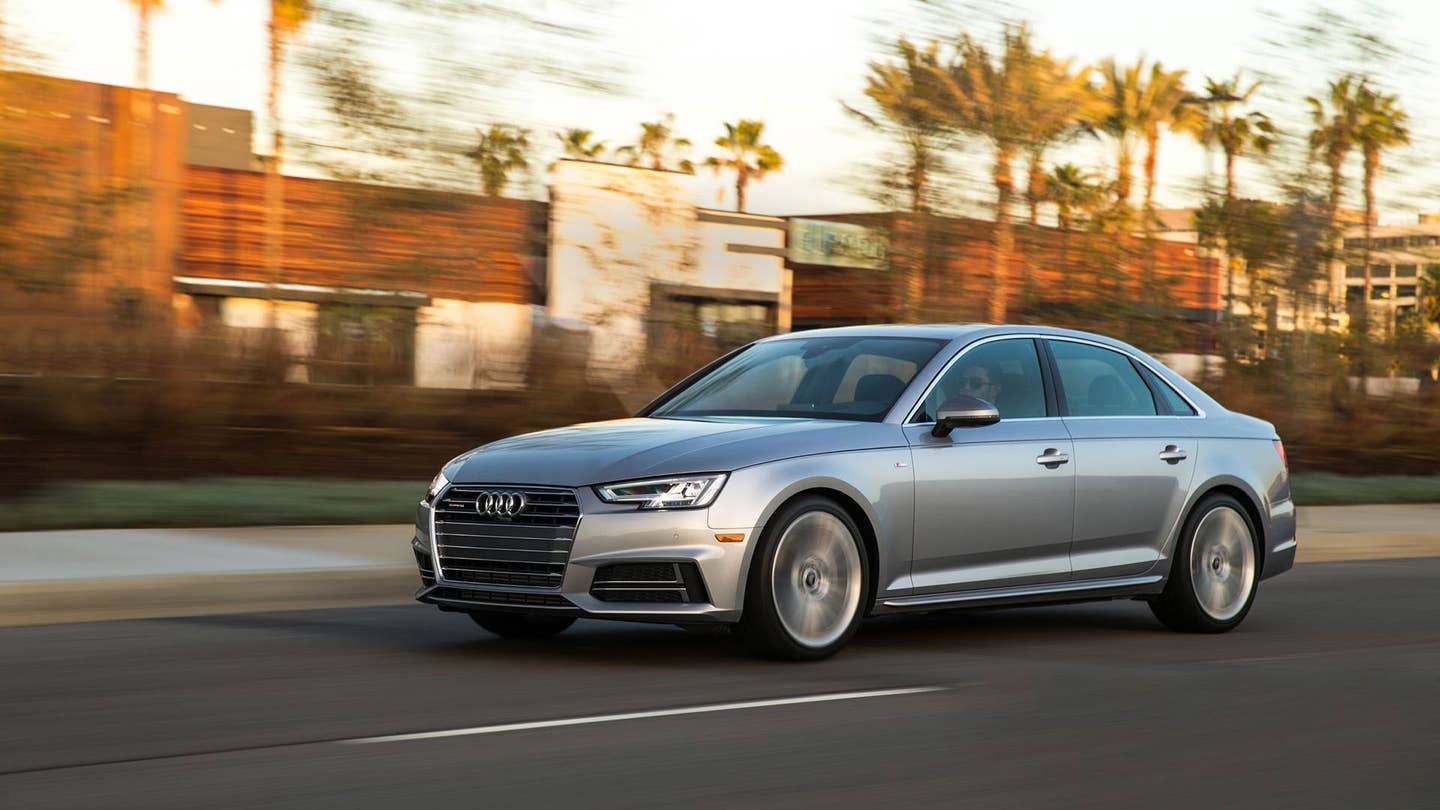 I’m hauling ass up Mt. Palomar in the 2017 Audi A4. The untouched morning snow refracts southern California sun, a sparkling bridal veil over the mountain’s gorgeous face. And the A4’s newfound surefootedness allows enough multi-tasking to consider Audi’s own rapid ascent, from a low country Volkswagen cousin to the eagle’s nest where Mercedes and BMW live.

The establishment luxury brands are worried, and rightly so. It took Audi four decades to hit 100,000 annual U.S. sales; during the past five years, that's doubled. And in a fast-changing country, Millennials are expected to buy three out of every four luxury cars by 2025, easing Boomers into retirement. Care to guess which luxury brand’s already on top of the younger cohort’s consideration list? From Silicon Valley coders to creatives everywhere, Audi’s positioning as the Apple of luxury cars—design- and detail-obsessed, hipper than Benz and less status-flashy than BMW—is hard-won. For every college-town prof and grad student, here’s Audi, the new Saab.

Of course, successful alternative acts are ultimately co-opted by the establishment. Scott Keogh, president of Audi of America, acknowledges this. But the A4 proves that Audi isn’t ready to go all U2 yet. The styling seems Coachella-complacent at first, but this understated compact sedan should age as well as its intended audience. And there’s beauty in the details: Viewed from up front, the hood shows no visible seam, draping atop fenders like a perfect Le Creuset potlid. Hinging the Audi’s hood open and closed, watching its rear corners jigsaw precisely into the fenders, offers a lesson in design and manufacturing ambition that eludes many competitors. From the side, that hood line must blend perfectly into a shoulder crease that wraps the car, rising and falling as subtly as the curvature of the earth. Rear turn signals are grabby, their crimson LED’s sweeping in Mopar-style animation.

Following the interior design coup of the Mercedes C-Class, Audi responds like you knew it would—by mimicking the flagship A8 wherever possible. That includes the latest 12.3-inch Virtual Cockpit driver’s display and an MMI controller with a 7- or 8.3-inch center screen. Straight out of the R8 supercar and TT sports car, Audi’s infotainment system beats Mercedes and BMW’s for style, graphics and easeful operation. Hunting for meth-lab-worthy cold medicine on our drive route, I scrawled two letters on the MMI touchpad, C and V, and the Audi’s Google search instantly found three nearby CVS pharmacies. Two more keystrokes, and it was added as a navigation stopover, with no effect on our final destination. Try doing that with iDrive. And nearly any vehicle function can also be mastered via switches on a lovely slim-spoked steering wheel.

A slim wafer of horizontal dashboard houses the A4’s latest design innovation: Brush fingers on fine-metal analog climate switches to summon their digital menus. (The latest Camaro has already nabbed clever temperature readouts integrated into climate knobs). The A4 can halt for vehicles or pedestrians, mirror traffic and steer semi-autonomously; though it can’t change lanes at the flick of a turn signal like a Tesla or new Mercedes E-Class. But the Audi will warn occupants against opening a door and creaming a looming cyclist or pedestrian, flashing a strobe of light in any of four doors. Attempt a precipitous left turn into oncoming traffic at slow speeds, and the Audi applies a jolt of brake to avoid getting T-boned.

By this point, design, technology and a dreamy interior are a given with Audi. But this A4 ups its sporting game, too, a jolt of coffee to go with the usual cream. The notorious understeer is largely quelled. Credit new steering geometry, a five-link suspension front and rear, and stealthy brake-based torque vectoring. A few scroungers will choose a front-drive A4 for its $38,250 base price, but the rear-biased Quattro all-wheel drive system—which sends between 60 and 85 percent of grunt to rear wheels—is well worth the $2,100 premium.

The Audi sheds up to 99 pounds despite a fractionally longer, wider footprint. It goes faster and stops better. A growly 2.0-liter turbo four with 252 horsepower and 273 pound-feet delivers a jaunty 5.7-second dash to 60 mph. The latest generation of Audi’s seven-speed, dual-clutch transmission is performance personified. Brakes are a high point, biting with carnivorous force near the top of the pedal’s travel, and include standard four-piston fixed front calipers. They’re the kind of pricey stoppers that BMW charges thousands extra for on its 3-Series.

To really put the A4 into 3-Series and Cadillac ATS performance territory, you’ll need to ante up for the Prestige version ($46,850, or $48,950 with Quattro). That adds an adaptive, adjustable suspension with a much broader range between comfort and performance than we’re used to from Audi’s Drive Select system. (Note: There’s also an optional, mechanical sport suspension that we didn’t test; engineer's says it’s a skosh firmer than the sportiest Drive Select setting, but at some expense to ride quality on lumpy pavement.)

Aiming the non-adaptive A4 Prestige Plus toward the Pacific Ocean revealed a version that’s better for a chill cruise or speedy freeway commute. But urged into canyon curves, the car was in over its demure head. The body lolled and the back end kept playing catch-up. The cushier tuning exacerbated the A4’s performance flaw: Steering that’s impeccably precise but a bit isolated and slow to engage, including a mere 15.9:1 ratio.

That all changed, quickly, with the adaptive suspension. Dialed up to Dynamic, the A4 gets serious about its sporting mission, just in time to tackle Mt. Palomar and environs. The dampers responded to g-forces to pin the body flat, which in turn makes the steering that much more responsive. Yet for all the improvements, Audi’s claim of best-in-class dynamics is denied.