Google's Waymo will use the I-Pace for its autonomous fleet. But Jaguar's new EV is so good, you'll want to drive it yourself. 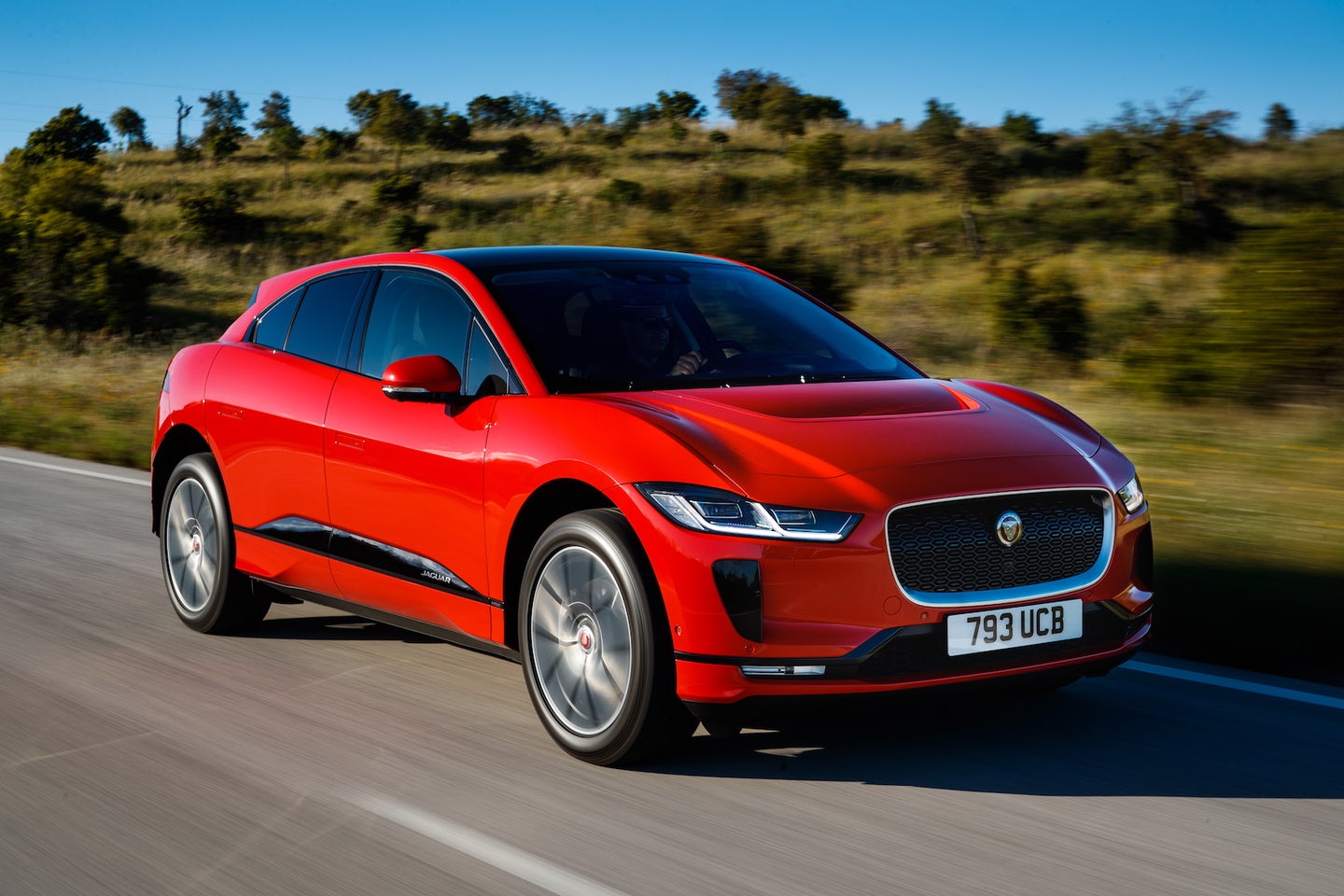 Set your watches, ladies and gentlemen: I’m going to try and get through a review of the Jaguar I-Pace SUV— a powerful piece of electric eye candy— without mentioning a certain Silicon Valley automaker, or its increasingly icky and unreliable chief executive. I will fail miserably, of course. But the point is that, while comparisons are inevitable in any type of product review, electrified cars like the I-Pace (or Chevy Bolt, or Nissan Leaf) are mature enough to deserve consideration on their own merits. They definitely don’t deserve a knee-jerk dismissal on some pointless basis such as 0-60 mph sprints or the lack of a Ludicrous mode.

Fortunately, people who fall for the I-Pace on sight — this being a Jaguar, after all— won’t need to explain their purchase to their neighbors over the manicured hedge. In fact, I’m convinced that status-attuned EV buyers will love dropping that fabled British name—as opposed to coughing “Chevy” or “Nissan” under the breath—and enumerating the many ways in which the I-Pace is actually superior to the California-built SUV competition.

First, the looks. Parked side-by-side, the Jaguar will make the Tesla Model X—ding ding ding, I lose—look downright passé. For all the Model X’s strong points, styling ain’t one of them; it’s the Cabbage Patch Doll of SUVs. And the Tesla’s falcon-wing doors are an exercise in form-over-function gimmickry.

The I-Pace, on the other hand, makes a strong design statement inside and out, including luxurious materials and fit-and-finish that leave the Tesla for dead. In reliable Jaguar fashion, the I-Pace is one of the most head-snapping SUVs around, an enticing melange of facets, curves, and angles. This crouched cat looks like it’s ready to pounce. And its paws are huge and sharp, with optional 22-inch wheels on my HSE model and Pirelli P Zero tires that sacrifice some fuel efficiency and ride quality for style and grip. 18-inch wheels with low rolling resistance tires are standard; available 20-inchers are likely the Goldilocks split between efficiency, comfort and performance.

The I-Pace is nearly two inches shorter than a BMW X3, but its stretched wheelbase is on par with an X5. It’s much shorter and lighter than the Tesla—by about 14 inches, and 400-to-700 pounds, bringing the AWD Jag in around 4,800 pounds. About 1,300 pounds of that comes from a 432-cell, lithium-ion battery wedged below the floor of the passenger compartment, a battery whose generous 90-kWh delivers a Jaguar-estimated 240-mile driving range. (A company spokesman said the EPA’s own estimates are maybe a month off, and that the official range may be a touch below 240 miles.)

Ample power is supplied by a pair of AC electric motors, one on each axle, that together spool up 394 horsepower and 512 pound-feet of torque. Tread lightly on the throttle, and the I-Pace will rely exclusively on rear-axle power at speeds up to 30 mph. Step harder, and the I-Pace storms to 60 mph in about 4.5 seconds, about 0.4 seconds quicker than the Model X 75D.

But this is one quiet storm: The uncanny, Simon-and-Garfunkel silence is heightened by full-frame doors and laminated acoustic side glass for the front row. Jaguar further claims that the I-Pace is its slipperiest model yet, with a 0.29 drag coefficient. If it’s all too spooky-quiet, you can crank up two levels of simulated drivetrain frequencies that are pumped through the audio system, generating a sound that recalls a modded version of Mr. Spock’s Enterprise. Yes, the sound is entirely superfluous, but still kinda cool, and it does give you some aural sense of how fast you’re hurtling toward the top speed of 124 mph.

The Jaguar scores another EV win with its posh, airy cabin. The minimalist vibe includes scalloped dashboard cutouts and a mix of aluminum and carbon fiber trim in my I-Pace HSE tester. With almost no visible border, the enormous panoramic sunroof evokes an infinity pool, but for sunlight. A floating-bridge console houses two strips of buttons for the transmission and vehicle dynamics—and unlike Volvos or other cars with such a trendy arrangement, you can actually see and reach through those console bars to easily access the storage cubby below. Aside from the handsome-but-slightly-wobbly climate control knobs, I couldn’t detect any of the middling materials or construction that have blemished some recent Jaguars, including the F-Pace and F-Type sports car.

Yet considering its footprint, the I-Pace is a space-waster. The rear hatch's glass is so steeply raked that it’s like another sunroof, and the stylishly-tumbling roofline steals both rearward visibility and cargo space. You’re looking at a crossover with 25 cubic feet of space behind the second row, and an equally meager 52 cubes with seats folded— no more than what you get in a Volkswagen Golf. Jaguar’s F-Pace can pack 30 percent more gear behind its second row, and about 15 more percent overall. The (much larger) Model X dwarfs the I-Pace with 77 total cubes. You won’t be helping friends move to a new apartment with this I-Pace, though it’ll be perfect for a celebratory dinner afterwards.

Jaguar’s latest InControl Touch Pro infotainment system, with dramatic dual screens gleaming in the center stack, is bursting with features, but takes its sweet time responding to touch commands. It's joined to a handsome 12.3-inch, reconfigurable digital driver’s display, which serves in place of conventional driving gauges. The I-Pace is also the first Jaguar to offer over-the-air software updates, including ones for infotainment and battery management.

Now, I personally have no interest in anyone knowing what I’m up to, let alone my car. But the machine-learning Jaguar is a curious cat, and wants to help. The navigation system monitors its owner’s driving style, previous journeys, and map topography to more accurately calculate remaining range; it will call up charging locations along the route if you’re short on power for a given destination. "Arrival Mode" offers up the nearest charging location or parking garage at the end of a trip. Using the key fob and your smartphone, the Jag steadily learns a driver’s preferences based on time, location, weather and behavior patterns; it can, for example, automatically pre-heat the steering wheel for a particular journey if it’s cold outside. And the Jaguar’s Alexa Skill link lets owners ask their Amazon Alexa devices for onboard information, such as state-of-charge or remaining range.

With an ankle-biter’s center-of-gravity, standard self-leveling air suspension, and continuously variable shock absorbers, the Jaguar is remarkably agile—for a 4,800-pound electric crossover. Those qualities helped the I-Pace set what Jaguar claims is a lap record for production EVs around Laguna Seca in California. In modified race trim, the I-Pace will also make history as the first electric car to run in a spec-racing series, the upcoming I-Pace eTrophy that will serve as a support series for FIA Formula E racing. Yet for all that, the I-Pace is decidedly not more agile than the sportiest gasoline crossovers, including Jaguar’s own (and roomier) F-Pace, which undercuts the I-Pace by a significant 400-plus pounds.

Yet the I-Pace is still a zapping good time—a joy buzzer of a crossover, if you will—as you tromp the gas and rocket stealthily past every car in sight. The electric steeling responds eagerly to inputs, and overall, the Jaguar will run circles around the Model X. But again, it’s relative: The I-Pace’s icy-cold steering feedback is bested by the better-connected gasoline models in the class, including the F-Pace, X3, Alfa Romeo Stelvio, and Porsche Macan.

The regenerative braking is almost perfectly tuned—especially in its “High” setting, which delivers up to 0.4 g of braking force and allows easy one-pedal driving, whether on the highway or in stop-and-go traffic. But switching between “High” and “Low” regen levels would be better accomplished via a dashboard- or steering-wheel switch, rather than a buried menu on the touchscreen. Transitions between the regenerative and mechanical brakes are nearly seamless, with Jaguar citing the electric brake booster rather than a conventional vacuum unit. But the brake pedal itself still has the unpleasantly squishy feel that’s the F-Pace’s biggest performance oversight.

Obviously, the Jaguar’s roughly 240-mile driving range is a key selling point for people who want a more-versatile, everyday EV. And the I-Pace delivered as-advertised driving range, including highly accurate estimates of remaining miles. My sense is that I could easily have exceeded 240 miles if I had put my mind (and foot) to it. Even when I caned the Tesla on the fast parkways north of Manhattan, dropping my efficiency a bit, all I had to do was back off for a few minutes to get back on track.

Owners will mainly feed their Jaguars at home, where it will take about 12 hours to charge from near-empty to full on a 240-volt Level 2 charger. Here at The Drive, we have our own Level 2 unit that helped me top off the I-Pace while I worked. Still, you’d like to drive the Jaguar when and where you want it, without pissing away valuable time on a trickling Level 2 plug. The infant state of America’s DC fast-charging infrastructure —from rural areas to the biggest cities—remains one of Tesla’s most compelling advantages, because Musk and Co. have gone from walk to run with their rapidly expanding Supercharging network. The Jaguar comes standard with its own quick-charging capability, through the SAE’s “combo plug” standard.

But finding one of those SAE (or CHAdeMO plug) fast chargers isn’t nearly as easy as finding a Supercharger. I drove the I-Pace to Woodbury Commons, an outlet mall about 60 miles north of Manhattan, but not because I needed to shop; I just wanted a place to hook into a 50-kW fast charger and still find something to do. I had to sign up for the EVgo charging service and download the company's app to access the station—I’ve mostly used Chargepoint’s units before—but I was up and running soon enough. The 45-minute session kicked the I-Pace’s battery from about 30-percent full to 95. For a guy who’s become used to all-day or overnight EV fill-ups, this was awesome stuff: In the time it took to browse Rag & Bone and buy some Venchi chocolate, the Jaguar was topped off. But a Tesla Supercharger, which streams life-giving juice to cars at up to 120 kW, would have accomplished the feat in half that time or less.

If Tesla has the Jaguar beat on charging time and convenience, the Jaguar’s style, luxury, performance and price might have Musk upping his Ambien intake. The Jaguar has even stolen some of Tesla's cutting-edge cachet through its alliance with Google/Alphabet’s Waymo, which will buy up to 20,000 I-Paces for its autonomous ride-sharing fleet. As for prospective EV buyers, the I-Pace starts from $70,495—a significant $10,200 less than the most-affordable Model X. That rises to $81,495 for the HSE version I drove, or $86,895 for the “First Edition” that’s being offered only for the 2019 model year. The higher-powered, longer-range versions of the Model X—the 100D and P100D—start from $97,200 and $141,200, respectively.

All credit to Tesla, the company that sparked a revolution in electric transportation and gave legacy automakers a kick in their complacent asses. Tesla continues to lead the EV game. But as this excellent electric Jaguar proves, the Silicon Valley company is no longer the only game in town; no longer the only reason to get excited about electric cars. Ultimately, that expansion of choices can help lift all boats—including Tesla—by making EV's commonplace on Main Street, USA.