Jaguar's first Tesla rival proves it has the moves. 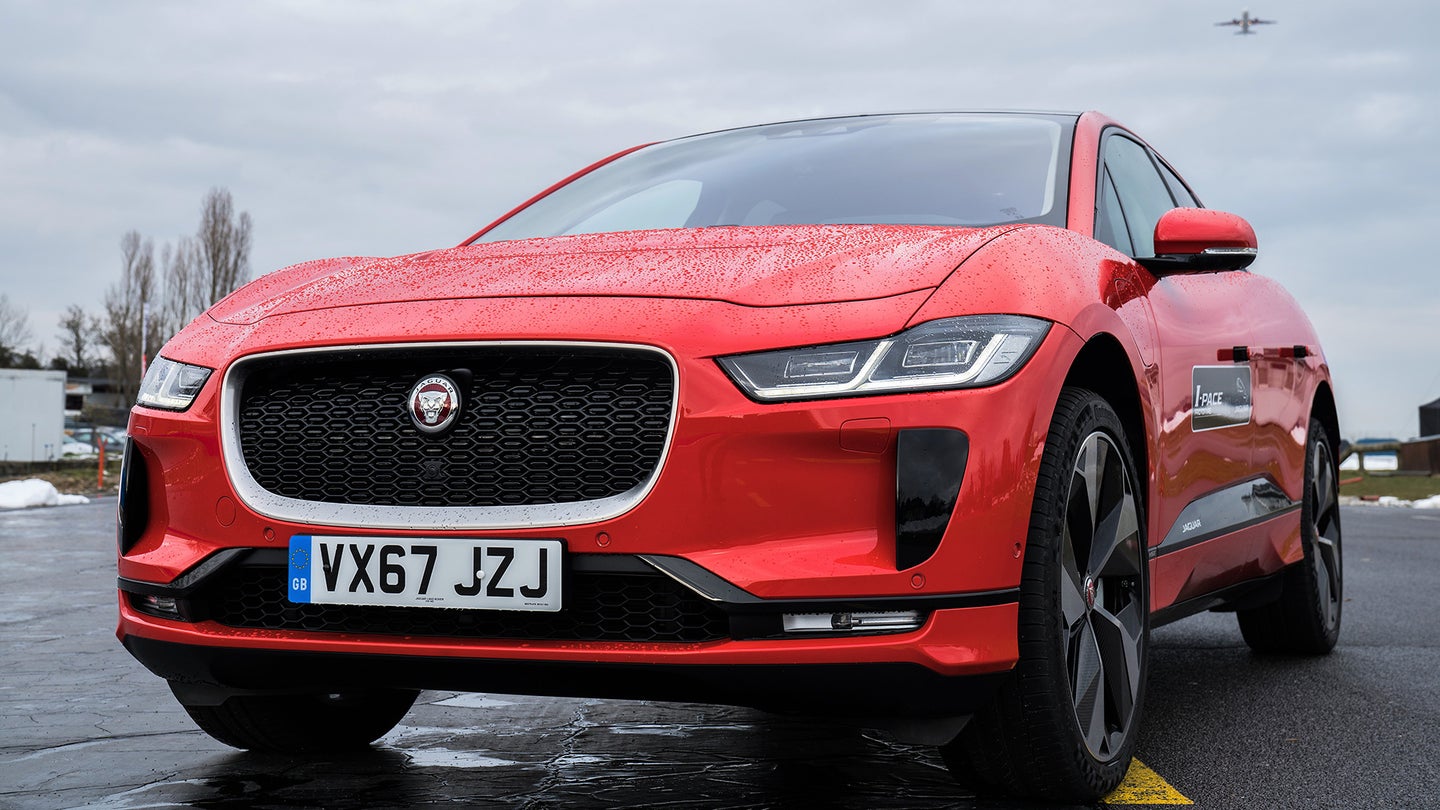 There are autocrosses—coned-out lanes plopped down in parking lots—and then there’s the crazy bit of automotive electric boogaloo set up by Jaguar to give a hint of the new I-Pace's prowess during the Geneva International Motor Show in March. The tiny course, adjacent to the airport, featured about 15 pairs of special waist-high posts with computer-operated lights on them for gates. When you rocket through one, the next targeted gate starts blinking green. They’re completely random, so no two drivers end up running the same course—and it's almost impossible to know where you'll be going more than a couple seconds in advance.

It’s an addictive game—even more so because you’re in the all-electric 2019 I-Pace, which handily tackles the aggressively jarring sequences as briskly and flatly as you could ever hope for from a crossover. The Jag sprints forward easily as you come out of each turn thanks to the 512 pound-ft of torque supplied by the dual motors, which will get the car to 60 mph in a brisk 4.5 seconds. The active air suspension keeps things tidy by mitigating body roll, even though you’re frantically playing connect-the-dots with the diabolical digital overlord in control of your autocross destiny. The I-Pace made quick work of even the most jarring zig-zags required to hit the next targets.

That performance should make Tesla sweat a bit—and since it’s rather astonishing given that the first mass-market all-electric crossover with usable (240 miles, per Jag) range actually didn’t come from Stuttgart or Ingolstadt, it's safe to say zee Germans are probably sweating a bit, too. Porsche’s Mission E and Audi’s E-Tron are next in the pipeline, so it will be great fun to see how they stack up with the I-Pace in the turns.

As for design, the new model looks fantastic in person—distinct from Jaguar’s other crossovers, namely the F-Pace and E-Pace, thanks to a lower stance and curvier, more dynamic lines. Inside, the vibe is familiar. Though Jaguar designer Ian Callum say he was thrilled with the design flexibility the electric configuration afforded, you don’t really feel the difference inside. Tesla celebrates electrification with open, airy interiors; Jag’s version feels like most other crossovers—a big center console, wraparound dash, etc. You don’t have that anything-goes feeling that Tesla provides, or the streamlined, minimalist look that’s the hallmark of EV interiors.

Then again, Jaguar customers aren’t necessarily Tesla customers, or BMW i3 customers, or Chevy Bolt customers—and the company is rightly obligated to make the cars that their buyers would want. Inside, it feels like any modern Jag...just one with no combustion engine noise that can shred autocrosses like a champ without spilling your coffee.

But all that just comes from a mere first impression, of course. Once the world's media has the chance to spend some real time with the I-Pace in a few months' time, it'll be possible to unpack all the enhancements Jaguar brought to the crossover challenge by virtue of electrification—and all the performance JLR has been able to squeeze out of the 90-kWh battery tucked down beneath the seats.