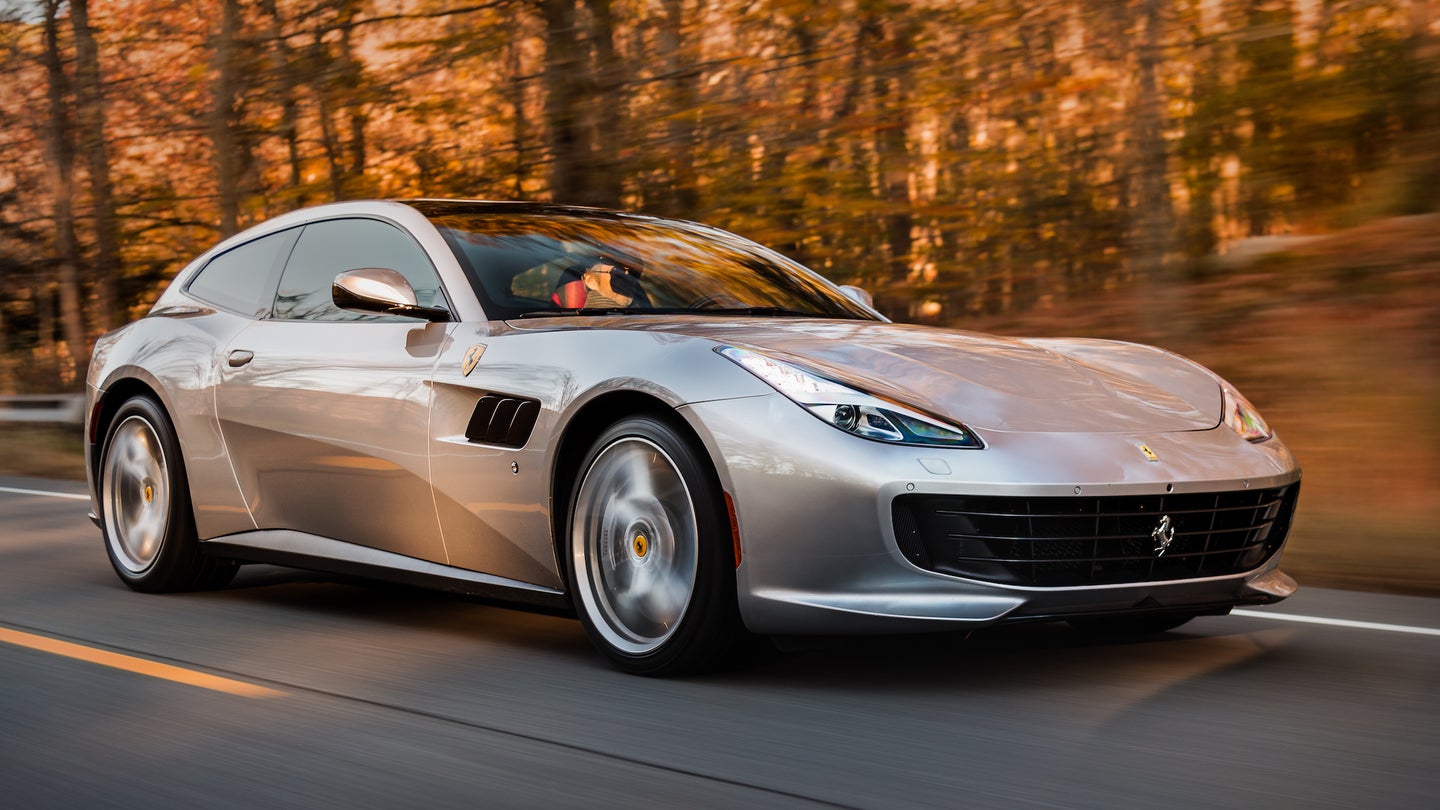 The original Ferrari FF was one divisive tomato. For every big-watch-wearing magnifico puzzled by its Kamm tail, there was an epicure who saw shades of the 1962 Ferrari 250 GT “Breadvan” in every angle, and thought the FF was exactly the kind of crazy Ferrari needed from its big grand-touring car. The FF had V12 firepower, a clever all-wheel drive system, four comfortable seats, and space for luggage, groceries, or fly-fishing gear. It could dispatch autobahn miles in any weather—at least between those frequent fill-ups—like a couch potato devouring pita chips. The FF may not have stood for “Family Ferrari,” but that’s as accurate a definition as any.

For its 2016 update, chief designer Flavio Manzoni removed a bit of gawkishness, and some aero drag, from the FF’s protracted body. Engineers doped it with Maranello’s latest chassis tech, including rear-wheel steering, and marketers renamed it the GTC4Lusso, a cryptograph of defining traits: A GT coupe with four seats and a focus on luxury—“lusso,” in Italian.

The Lusso retained the FF’s clever AWD system, but gained a more powerful version of the blustery, 6.3-liter V12 that traces its lineage back to the Enzo supercar. Inside was a more elegantly turned interior and an up-to-date infotainment system, correcting one of the FF’s often-cited faults, with a 10.3-inch HD touchscreen. An optional panoramic roof gave rear passengers nighttime views of Ursa Minor, while an available “dual cockpit,” 8.8-inch digital display let shotgun riders view the car’s vitals, change the stereo playlist, and send navigation directions to the main screen. Above all, with a full card of Maranello’s latest technologies and 690 horsepower from a dozen screaming Italian pistons, the Lusso was twice the athlete the FF aspired to be.

Now, imagine a rear-wheel-drive Lusso with a V8 from the California T-replacing Ferrari Portofino. If your first thought is, porca miseria!, the GTC4Lusso T may not be your cup of sheet metal. But if you have any doubts that purists always know best, this car may be the Ferrari GT for you.

With a base price of around $40,000 less than the 12-cylinder Lusso (it starts at $260,000 in the U.S.), Ferrari says the Lusso T will appeal to younger buyers new to the brand, not honor-bound to Ferrari’s V12 legacy, and unimpressed by the twelve pot’s insatiable thirst for fuel. Its 3.9-liter V8 also happens to thwart China’s import tariff on powerplants four-liters-and-up, which will save Chinese buyers hundreds of thousands of yuan over the V12.

Of course, all of the whys and wherefores of product planning fade as you slide behind the rococo face of the F1-style steering wheel. Set deep into the Lusso T’s engine bay is Ferrari’s F154 BD oversquare eight, derived from the BB version in the outgoing California T. While a relative of the V8 introduced in the 488, this version enjoys a less-rabid tune to match the Lusso T’s GT-car bearing. The flatplane-crank, direct-injected V8 with a matched pair of IHI twin-scroll turbochargers produces 602 horsepower and 560 lb-ft—the latter a not-unimpressive 45 lb-ft greater than the Lusso’s V12.

Still, it’s loaded with engineering nerd bait. Most turbo cars see a torque spike early, while the rest of the curve is table-top flat. The result is purely linear acceleration. Ferrari’s Variable Boost Management software increases torque output for each advancing gear, producing an exciting curve that builds boost—and drama—through the revs and allows for longer ratios in sixth and seventh gears. Interesting to note: The engine only reaches peak torque in seventh gear, a trick to maximize highway mileage. Overall, the technology benefits accrue to fuel consumption as well as performance, with a 25 percent increase in efficiency and a 30 percent increase in total range over the V12 Lusso.

Upgraded pistons and connecting rods, larger intercoolers, and wider exhaust bore help give the Lusso T’s V8 added explosiveness. Low-friction innards, the flatplane crank’s lower rotating mass, plus the twin-scroll turbos—and all the computing power connecting it all—give it blinding throttle response that’s practically indistinguishable from a naturally aspirated engine. To anyone who’s only driven “normal” turbo cars, the dearth of lag is inconceivable. This is an engine with the best of both worlds: tremendous low-rev kick, and a thrilling surge to its 7,500 rpm redline.

The big difference is in the sound. While you could write an epic poem about the V12's wail near redline, the V8 emits a subdued, but very Italian, atonal roar that starts unremarkably, then crescendos into a Storm King howl.

The result: This car is a cruise missile. Speed builds so rapidly, the Lusso T quickly outmatches the road by a factor of 10. Still, with such a storehouse of grip, the Lusso T can transfer considerable power to pavement. The chassis never loses its poise, nor should it, with a mind-twisting array of engineering acronyms under the seat: E-Diff (electronically actuated differential), Side Slip Control 3.0 (yaw rate), F1 TRAC (traction control), ESP 9.0 (stability control), SCM-E (magnetorheological dampers), all working to shrink the mile-long wheelbase around the driver. The same rear-wheel-steering system that works so seamlessly with the Lusso’s all-wheel-drive system is in effect here, though tuned less for stability than to aid turn-in, helping shorten the wheelbase in fast corners, while tightening turn radius at slow speeds.

Ferrari says the Lusso T gets different spring and damper rates and roll-stiffness settings than the Lusso, but only a track test might reveal if the difference affects dynamics, or merely adjust for changes in weight. On the road, it’s supple over everything but the heave-iest frost heaves. I couldn’t detect much difference with the “soft damper” setting, but that’s likely a testament to the chassis tune and tech.

Whichever bit of tuning magic is responsible, the Lusso T has the typical Ferrari edginess that sets it apart from other GTs. An ultra-quick tiller keeps your hands working while on-center, and the Lusso T’s front end is quick to react. Steering weight is a bit light, and the wheel doesn’t load up enough in mid-corner, but what the Lusso T lacks in feel it gains back in wired-to-the-brain-stem intuitiveness.

Oh, then there's the modes. Comfort smooths out the aural and gear-swapping edges, while Sport calls up the quick, aggressive gear changes we know and love from the Ferrari F1 box, while opening the exhaust valve for a full-throated engine note. Ice and Wet modulate the systems for maximum traction in slippery situations. And for automatic shifting, there’s no liability compared to a slushbox, whether cruising on Collins Avenue or parking at the Stop and Shop. The Ferrari seven-speed, dual-clutch box has come a very long way.

Visually, the differences between the Lusso and Lusso T can be summed up thusly: an attractive set of 20-inch forged wheels and subtle exhaust tips. You can order them or not. Your choice.

Questions remain. Can even the world’s best turbocharged V8 lure buyers away from the classic Ferrari V12 GT? Will the GTC4Lusso T attract new Ferraristi to the marque? Will enthusiasts sweat the tenth of a second the Lusso T (3.5 seconds) gives up to the Lusso (3.4 seconds) in zero to 62 mph? Will they balk that the V8 can’t reach 200 mph (top speed: 199 mph), while the V12 can slam into 208? I’m not sure, but this is a very, very good and very usable Ferrari. The usual questions hardly apply.

The Ferrari GTC4LussoT Tosses the V12 for a Turbo V8

The Ferrari GTC4Lusso Is Fast, Ferocious, and Close to Perfect

The best all-wheel-drive car in the world just got better.