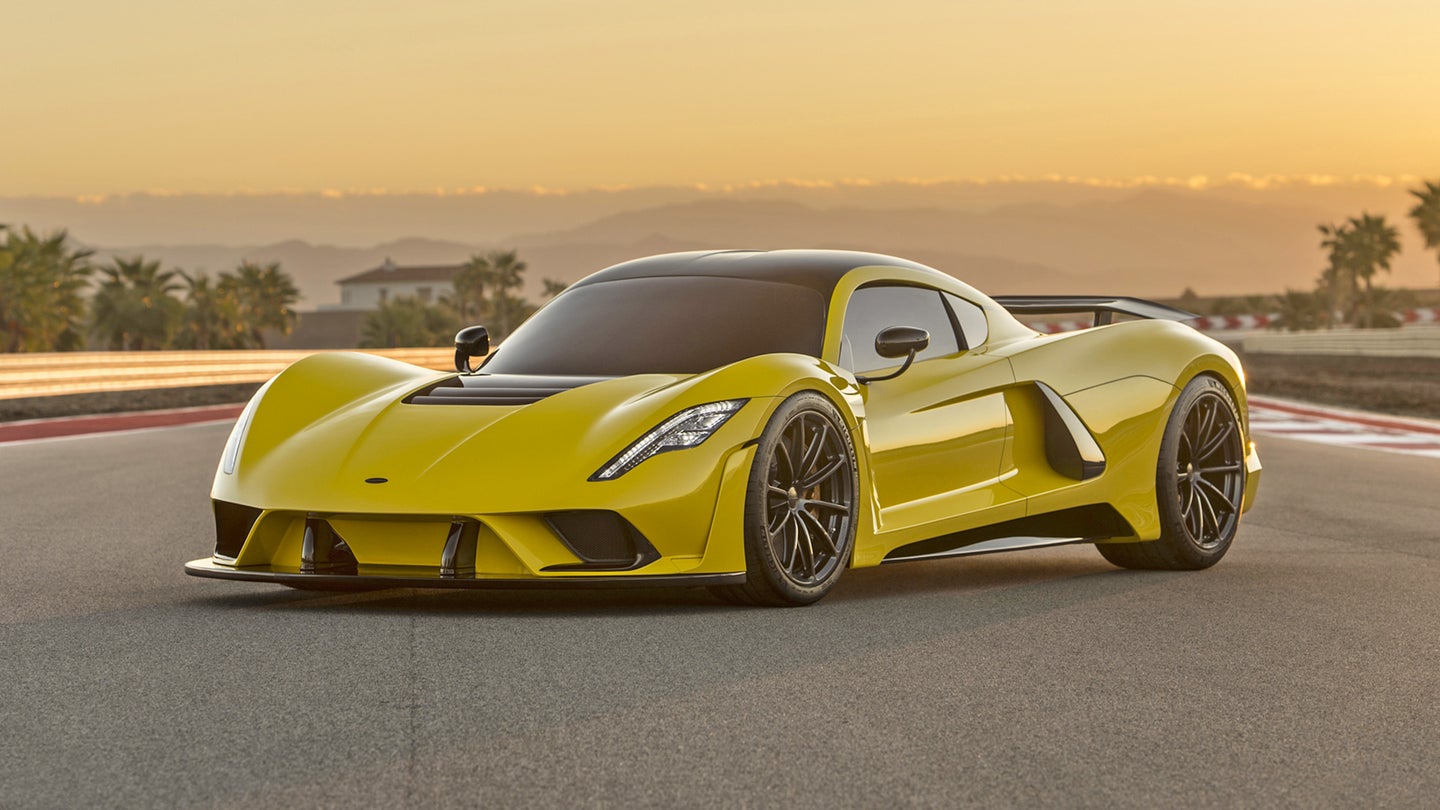 Everything, as the old saw goes, is bigger in Texas. Apparently that goes for top speed numbers, as well, because Houston-area-based Hennessey Performance has dropped one Big Bertha of a claimed Vmax for its newest hypercar. The Hennessey Venom F5, the company claims, will keep on accelerating all the way to 301 miles per hour—and outaccelerate a Formula 1 car from a stop to 186 mph along the way, to boot.

While the name brings to mind the slightly-Lotus-based Hennessey Venom of speed records past, the company claims the Venom F5—the alphanumeric, founder John Hennessey says, stands for the top rung of the Fujita scale used to measure tornado wind speed—is an all-new car, built fresh from the ground up with the goal of bringing the title of World's Fastest Street Car back to the U.S. of A. The 0–186 mph sprint will take less than 10 seconds, the company says; going from a stop to 249 mph will take less than half a minute.

On paper, at least, the Venom F5 seems to have what it takes to give the likes of the Bugatti Chiron and Koenigsegg Regera a run for their money. Power comes from an all-new twin-turbo V8 that the Hennessey team says it's developing; while specifics are sparse right now, the company says the engine will crank out a whopping 1,600 horsepower. That power will then head through a seven-speed paddle-shift gearbox—a single-clutch version, interestingly enough, not a dual-clutch like most carmakers have moved to—on the way to the rear wheels and the rear wheels alone. Owners should be advised to keep a spare pair of Hanes in the glove box, in case of 100-mph-wheelspin-related "incidents."

But if maximum velocity were just a matter of raw power, the Bloodhound SSC could look like Mickey Rourke's face and still break the sound barrier. So the Hennessey Venom F5's skin is a slippery, carbon fiber dermis with a coefficient of drag of just 0.33, with active aerodynamics to help keep things under control at the sort of speeds better measured as percentages of Mach numbers. Thanks to lightweight construction, the Venom F5 will reportedly weigh in at 2,950 pounds with all its fluids. Which means each pony only needs to push around 1.84 pounds of car.

If the bold top speed claims are true, that would make the Venom F5 the first production car (assuming, of course, you count a super-limited run car made by a shop that mostly soups up American muscle cars and trucks as a "production car") to break the 300 mile-per-hour barrier. Extraordinary claims require extraordinary evidence—and while Hennessey certainly has a better track record with setting ludicrous speed records than most small carmakers, a top-speed claim that notable will need some serious evidence. To quote another turn of phrase, the proof of the pudding is in the eating—and the proof of the hypercar is in the testing.

Oh, and the price for all this? $1.6 million, to start. Only 24 will be built, however, so at least you likely won't wind up behind another one in the Hardee's drive-thru line.