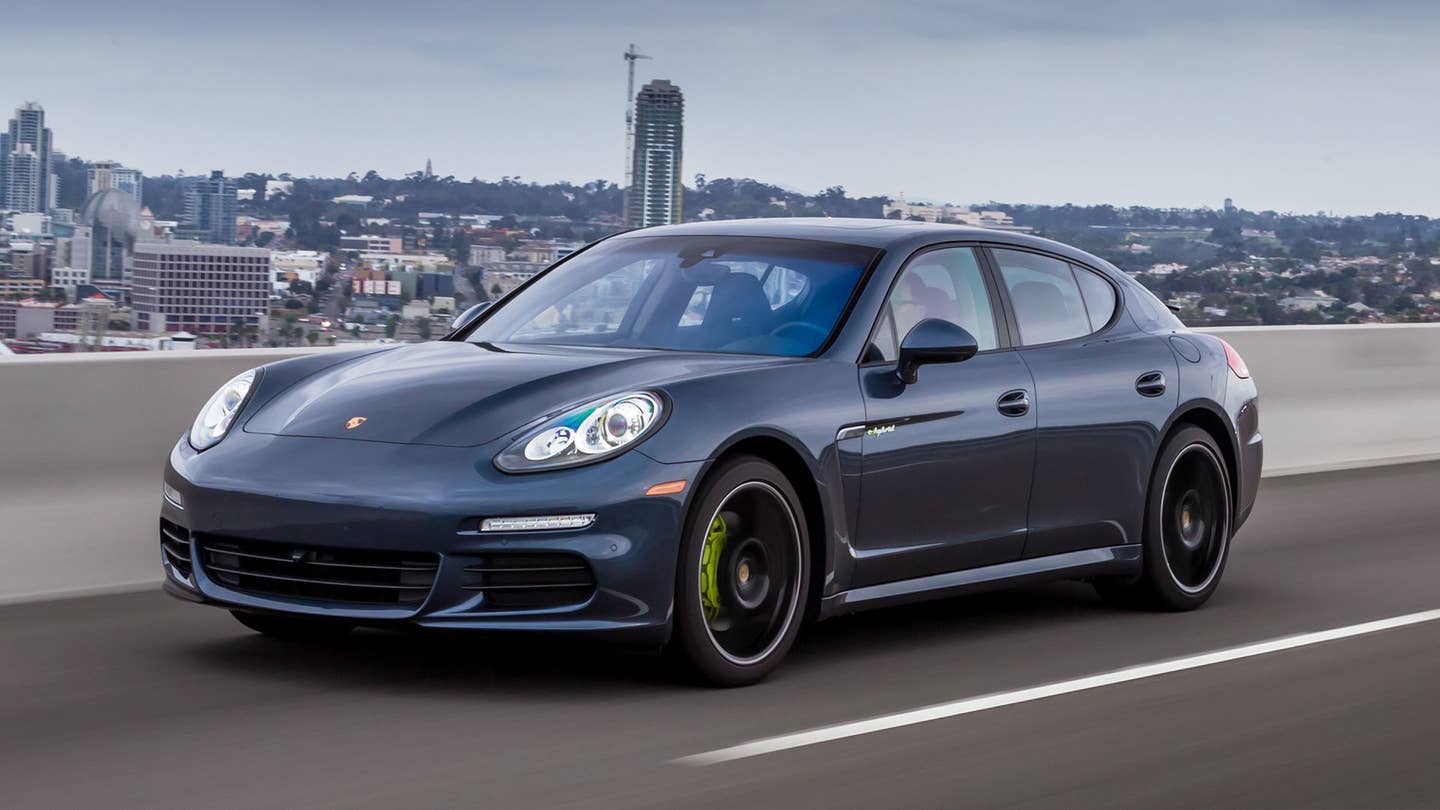 Electric cars are starting to move us. Increasing numbers of American consumers are being physically transported in battery-powered vehicles. Sales are strengthening. The selection of available electric vehicles, or EVs, hasn’t been broader since the first electric car revolution, which coincided with the mass-marketing of the automobile in the early 20th century.And the infrastructure to charge these vehicles is both proliferating and expanding in its capacity to juice a car up at a rate beyond the glacial. (Though glaciers are on the move these days, redoubling the need for more electric cars juicing up from clean sources.)

We now have a broad enough range of EVs on the market that some actually get us amped, stimulating us in a way we can’t—to paraphraseour favorite dynamic philosopher, Marcia Griffiths—see, hold, resist or do without.

In fact, there are enough EVs for sale in the United States that we could compose an 11-strong list of our favorites and not include every one of them. So we did.

You may wonder what our criteria were for selecting these particular vehicles. Well, first and foremost, they needed to require a plug, because, what’s electricity without a plug? (Answer: Witchcraft.) Second, they had to be advanced, original and/or intriguing in some way, not just some battery pack-implanted version of an already shitty commuter car like the Smart ED. (Also, their name could not be an abbreviation for erectile dysfunction.) They all had to be available to buy or lease now, or coming this calendar year. They had to, in essence, be viable purchase propositions that we’d actually entertain. From this bunch, that’s high praise.

You’re going to call foul already, right? Isn’t the Spark just a battery pack-implanted version of an already shitty commuter car? No. The Spark is fun to drive even with its wheezy equivalent 98-horsepower gasoline-fired 1.4-liter four-cylinder. And it comes inthis delightfully fetal pink color. The EV improves on all that with 43 more hp and boffo torque, making it not only the best performer in the Spark range but, since the sad demise of the Honda Fit EV, one of the only subcompact electrics. Also, it’s so cute and practical you just want to pinch its chubby door handles.

Chrysler not only popularized the American minivan, it still dominates the category. (The Moparssold more of their van twins in 2015 than Honda, Kia, Mazda, and Nissan combined.) And though we don’t know much about the new van they’re unveiling in Detroit, they’ve confirmed that a plug-in hybrid will be offered. We have an inappropriate affection for minivans, because they’re so practical andstealth sexy, because they’re far more honest and utilitarian as movers of people and crap than crossovers, and because we’ve always gotten lucky finding delicious snacks stuck in the carpeting of the ones driven by our friends with kids.

Do you like chartreuse? We think it has its uses. For example, Porsche’s plug-in hybrid executive sedan employs it as an accent color on its brake calipers, which immediately draws our eye away from the rest of the Panamera’s gelatinous beast of a body. So equipped, it provides the Panamera with the capacity to creep silently, on pure-battery power, into any sea of people talking shit about how ugly it is, so you can hear those bitches clearly and seek proper vengeance. Also, we needed a Porsche on this list, and the Cayenne is lethally suburban, and the 918 is sold out.

want to know the best cars to buy? Your Email Address

Now that LaFerrari, 918, and P1 are sold out, the BMW i8 is in a market category of one in 2016: a plug-in exotic hybrid hypercar. (Some would argue for the Acura NSX’s inclusion in this category, but it is also in a category of one: plug-in exotic hybrid hypercar that is more expensive and uglier than the i8.) The shape and the technology are arresting. Performance and efficiency are borderline unbelievable. And few cars make more of a statement. Its electric-fart engine soundtrack is about as convincing as a rent-boy faking an orgasm, but is offset by the cool Louis Vuitton carbon fiber luggage designed to fill the back seats. And, thecoming convertible version!

We like just about everything about the new C-Class (even ifsome of our fancy designer friends have nitpicky criticism.) But you know what we want more of in our C? Stealth, torque and efficiency. The C350e looks just like the regular C300—doing without the aggro AMG add-ons of the step-up C450—but packs a battery pack that provides 34 more horsepower and a whopping 170 more torques, giving it parsimonious and accelerative advantages. Mercedes prices its S550e plug-in at exactly the same cost as its base S-Class; we hope for the same here. We’ll take ours in “Luxury” trim, with a proudly upright three-pointed star on the hood, please. Please?

Is there an interior this side of Bentley that rivals Volvo’s latest efforts? We’re viking-slain by the refined luxury of theXC90 crossover (pictured) andS90 sedan, and from the spy shots we've seen, Volvo is endowing its upcoming wagon with the same attention to detail. The brand also fits it with the same Scalable Platform Architecture underpinnings, but with a lower center of gravity and less weight, a recipe we always favor. Also, the same engine options, which means that the top-tier pick is the supercharged, turbocharged, plug-in hybrid T8 version. We’re top-tier, and have a lot of emotional baggage to schlep, so this is our choice as well.

We’re usually opposed to sincerity, opting instead for the kind of sneering sarcasm that is the hallmark of the insecure. But somehow, BMW’s wee electric hatchback, with its sanctimonious digested plastic seats and sustainably harvested Pringles trim, won us over immediately. Maybe it’s the candor of the design—it is exactly what it says it is, an upscale global city car. Or its rear-wheel drive and tight turning circle. Or its onboard generator. Or its familiar controls compared to our 2004 E46. If we were actually going to buy an electric vehicle, this would probably be it.

O.K., we take back what we just said about the i3. If we were going to buy an electric car, it would just as likely be this cramped, impractical, overpriced personal luxury coupe. Why? Because we love Cadillacs, because we’re a fan of the Volt engineering that underpins it, because its impossibly slow sales have rendered it a dealer-incentive magnet, and because it’s probably one of the best-looking designs of our young century. The Caddy CT6 luxury sedan will feature a plug-in hybrid option, and we’re four-door people, but as rare as that vehicle will likely be, the ELR will always be more recherché, and we can’t help it, we like to be noticed.

Speaking of being exactly what it says it is. This is what people picture when they close their eyes and think “electric car.” (Or, “Miyazaki protagonist.”) It is the cheapest electric car on the market (the Smart ED is not a car; it is a punishment), starting at just $23,000 before the $7,500 federal tax incentives and whatever your state or municipality might kick in. Zero-percent 60-month financing, and no real maintenance or charging costs mean this thing is practically free. Free is neato.

When the Volt emerged from the ashes of the General Motors’ bankruptcy, it was late, dated and highly suspect. But like many of the General’s most intriguing solutions (see: GMC Motorhome, Pontiac Aztek, Saturn) it was at once prescient, and the proper and most intelligent answer to the greatest number of people’s problems.The new Volt is even better, with more range, superior handling and improved amenities and looks. Sadly, we don’t make our vehicle decisions based on an entirely rational checklist.  If we did—and for those of you that do—the Volt would be the right solution. As it stands, it’s far more right than you think.

Though no longer on sale, these three unicorns can be spotted in the wild. They gain entry into our winners’ circle because they did something particularly special.

Yes, it was cramped inside. Yes, the interior looked like it was sourced from the clearance rack at Hobby Lobby and put together by a preschooler with a glue stick. Yes, Justin Bieber bought one. Yes, they got a little hot and bothered in the rain. But look at those shoulders and thighs. Also, solar roof. We need more solar roofs.

Ever had that dream where you find yourself driving the TGV, but there’s only an engine car, there are no tracks, the top comes down and there’s a handsome someone in the seat next to you? Welded together, jankily, by the massive energy of Elon’s ego, the Roadster was an inauspicious start to an empire, but a most essential form of fun in a category not theretofore known for enjoyment.

Not a plug-in, but the first modern hybrid. Lightweight, whimsical, available only with a stick shift and impossibly frugal. A radical outlier that still looks like the future we were promised. A wholesale reminder of everything that was (is? please?) right about Honda.