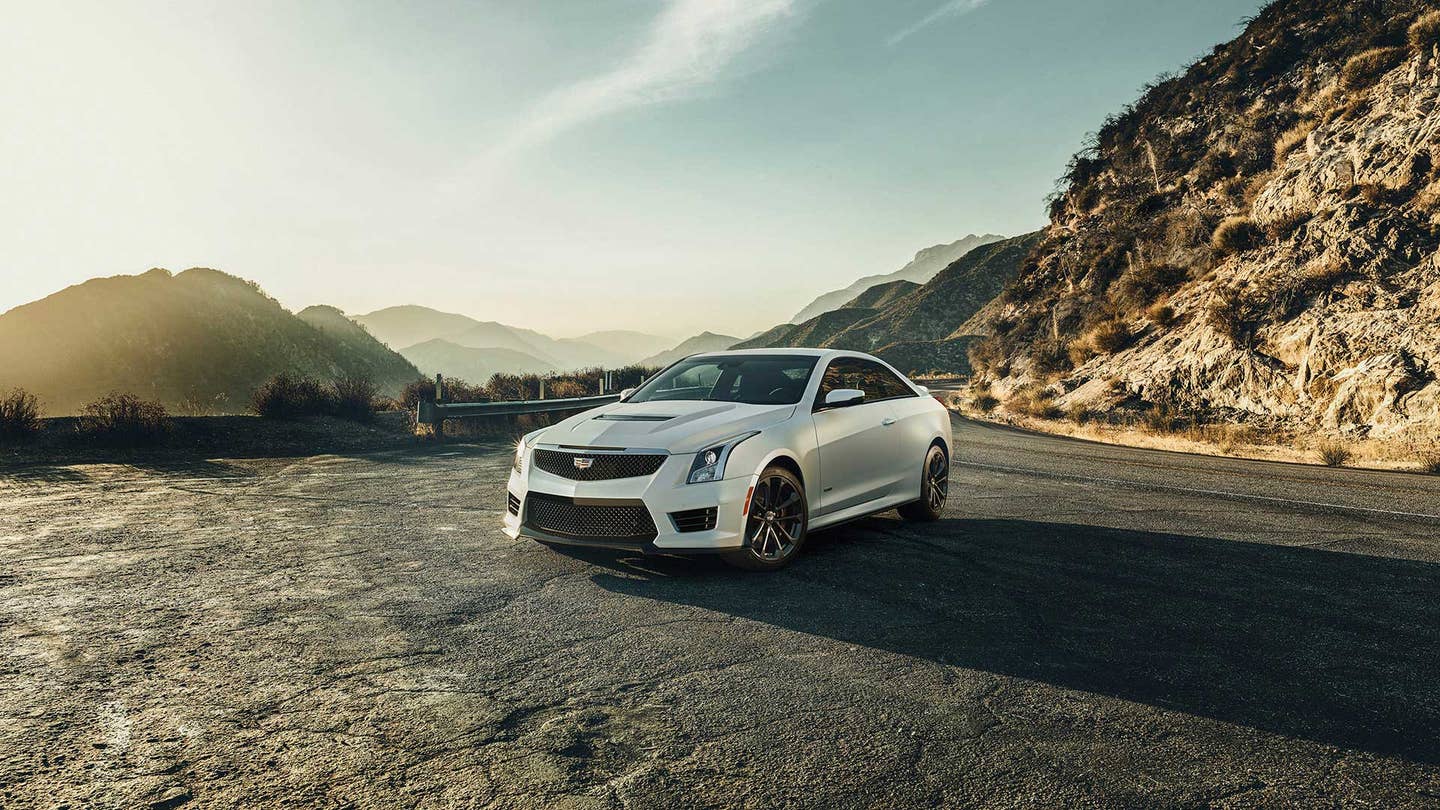 An obsessive is stalking the Monticello Motor Club.

At this 4.1-mile private circuit, nestled among the sturdy foothills of the Catskills, the Cadillac ATS-V puts on a phenomenal, fleet-footed show. The object of its obsession, however—whose talent and celebrity it covets more than anything —is nowhere to be seen. OK fine, it’s slumming in a PowerPoint.

During an introductory presentation to the ATS-V in Monticello’s polished garage, Cadillac screens a tribute to five generations of the BMW M3. The slideshow recalls a stalker’s wall of creepy Polaroids of a sexy, unsuspecting victim.

From someone who grew up in Detroit, I see such refreshing humility as a sea change for General Motors, whose echoing corporate chamber long convinced it that cars like the Pontiac Grand Am GT were, well, GTs.

That willingness to learn from BMW (a reverence that involved tearing down an M3 to expose its innermost secrets) is reflected in the ATS-V’s every kickass move. Remarkably, the Caddy manages to snatch the pebble from the Bimmer’s hand.

Cadillac may have targeted the BMW’s performance, but its own racing and engineering gurus looked to one-up the M3 wherever they could. John Barrick, the ATS-V alpha director, is a former national karting champion. Lead program engineer John Buttermore is a two-time national SCCA champ.

"The M3 is the kung fu master and Cadillac the disciple."

Both cars are powered by twin-turbo six-cylinder engines, but the Caddy makes 464 horses to the BMW’s 425. Both cars clock 0-60 mph in a breathless 3.9 seconds and the quarter mile in about 12.2. The Caddy tops out at 189 mph, with the BMW electronically leashed at 155. Both models start with the same electrified ZF steering rack, but the Cadillac’s tuning magic makes it feel more eager and natural, more attuned to its pilot and every granule of pavement streaming below.

Bedecked with V-division bodywork, including a yawning heat extractor on the hood, sedan and coupe reward second glances better than first. The four-door, with its pumped shoulders and pitbull stance, still carries a musky, he-man whiff of Holden, the GM Australia division, which produced the Pontiac G8 sedan. Overall, the coupe strikes a more elegant pose than the four-door manages.

Sharing its rear-wheel-drive chassis with the larger CTS-V, the ATS-V beefs up in similar fashion. An aluminum shear underbody panel links rockers to the engine cradle, with suspender-like front braces to further buttress the package. The Caddy bristles with enough radiators and heat exchangers to chill a boatload of tuna. When a deep red ATS-V sedan rolls into the pits, we hear its 850-watt radiator fan whirring from 50 yards away.

“When that fan turns on you can find stray cats stuck to the grille,” Barrick, the ATS-V director, says with a grin.

Already 420 horses strong in the CTS Vsport, the 3.6-liter engine (renamed the LF4) adds 44 horses with titanium connecting rods and a bigger dose of twin-turbo boost. A shortened, more efficient path for exhaust gases powers turbines made from feathery aluminized titanium. The engine doesn’t make much of an aural statement, but the spank of its powerful hand is unmistakable. The Caddy storms past 145 mph on Monticello’s longest downhill curl, and positively scatters a group of race-prepped Porsche Caymans driven by Monticello’s club members. A series of brutal laps elicits some smoke from powerful Brembo brakes, but a cooling trip around the clubhouse has them raring to clamp down anew.

If you want this car, then you want the standard six-speed manual transmission, no matter how much rush-hour thigh-pumping that may require. The six-speed Tremec shifter is almost indescribably more party-friendly than the eight-speed automatic. You’ll also save $2,000 versus the good-not-great automatic. Its paddle-shifted gearing is identical to that in the Chevrolet Corvette Stingray, but gear changes still aren’t as crisp or quick as the Germans’ dual-clutch arrangements.

The manual can automatically match revs to avoid upsetting the car during downshifts. And the No-Lift Shift feature lets you mat the gas on upshifts to keep turbos on the boil. Of the Caddy’s many inheritances, that No-Lift feature is the most humble, with Barrick tracing its lineage to the Chevy Cobalt racing program.

In German-aping fashion, the ATS-V also bundles inscrutable abbreviations like PTM, the Performance Traction Management system, in tandem with a sensitive electronic limited-slip differential that doles as much power to the rear wheels as physics and the driver’s skill can handle. As in the ‘Vette, the beautifully calibrated PTM has five sub-settings that resemble skill levels in a video game. (The Drive deputy editor Jonathan Schultz aptly dubs it the hidden In-N-Out menu of Caddy performance.) Buyer beware, setting No. 5 delivers a high-wire act without the safety net of stability or traction control. 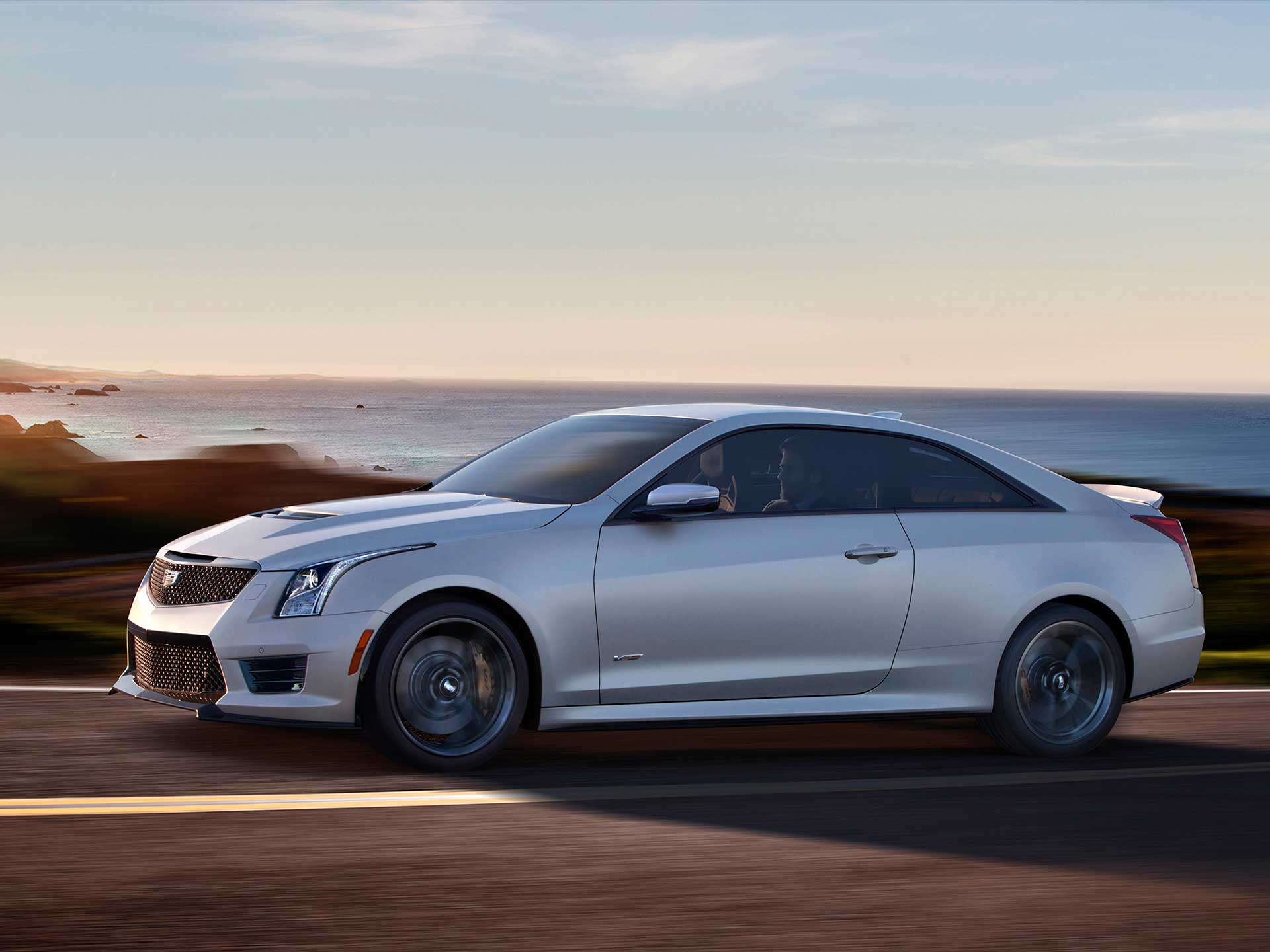 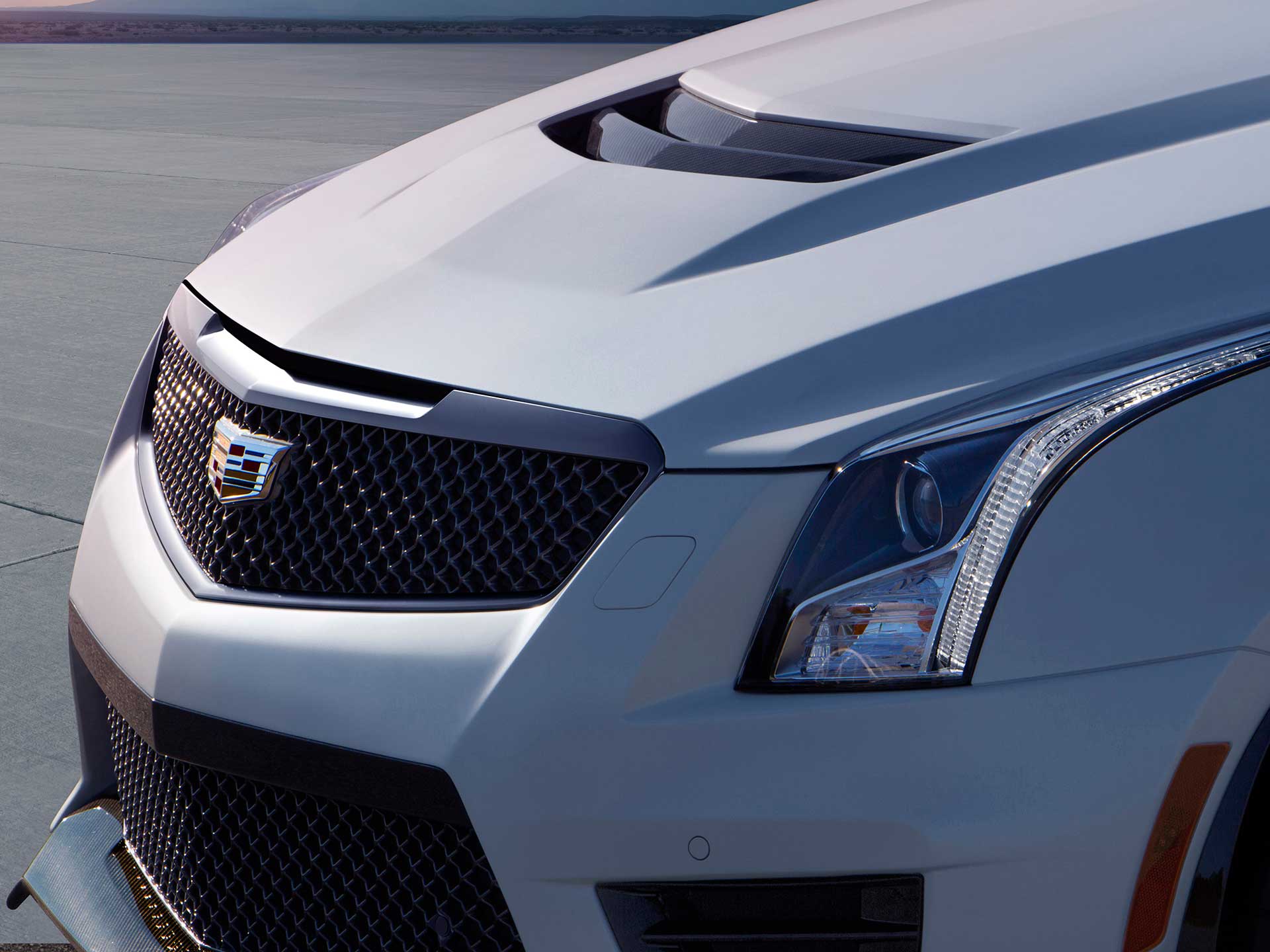 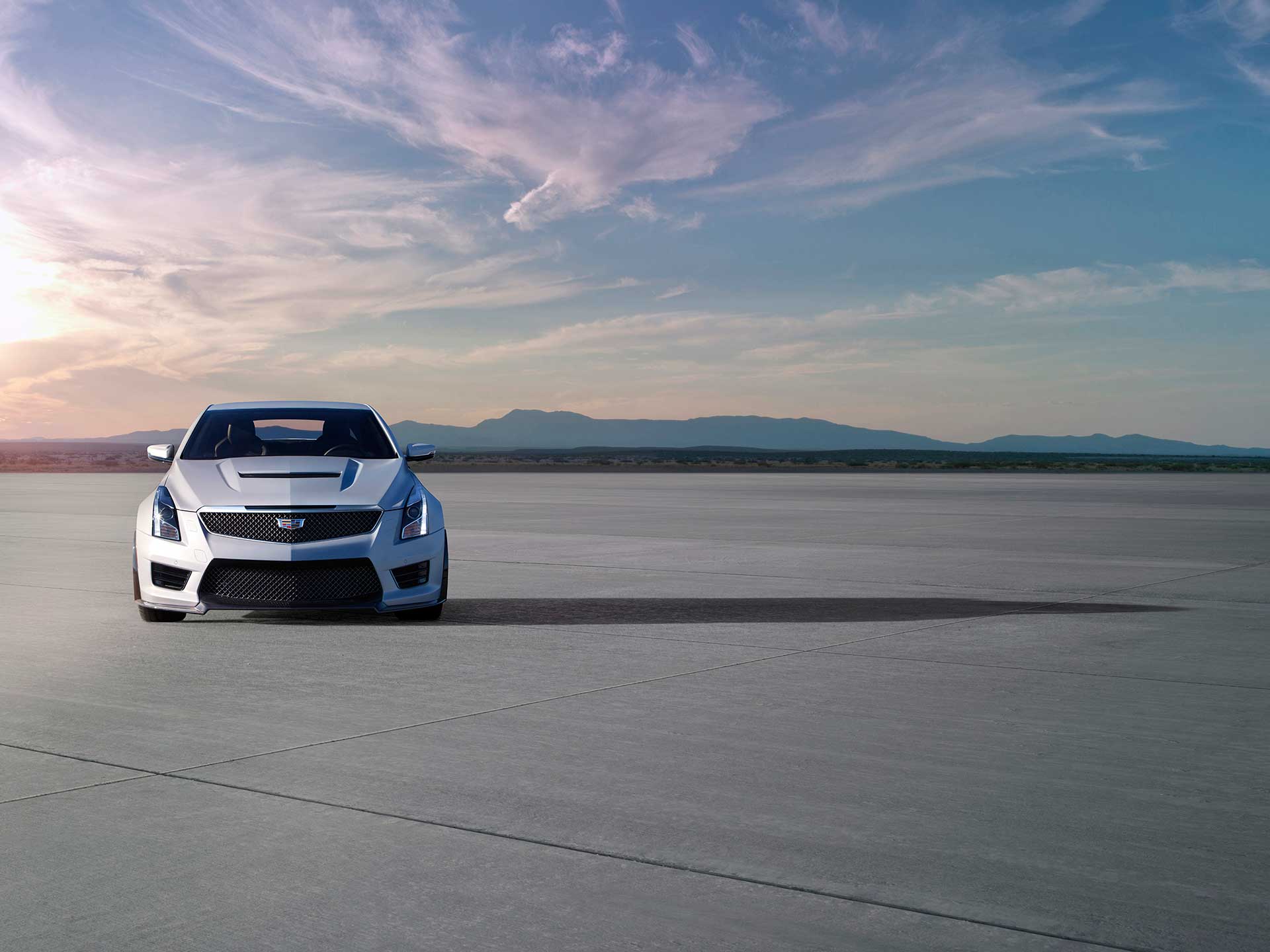 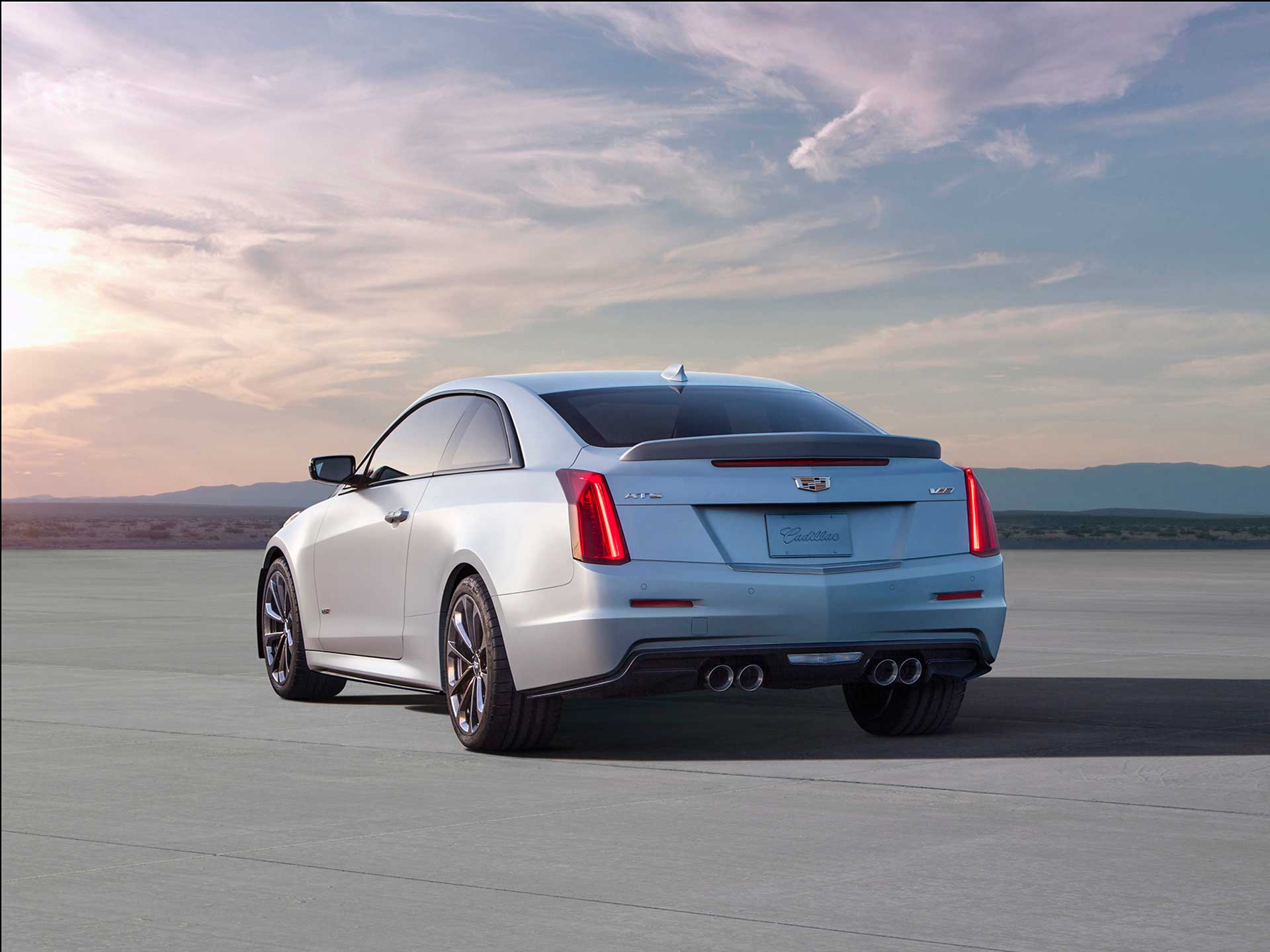 The third-generation Magnetic Ride Control suspension system has 40 percent more peak damping, but can soften the ride 40 percent faster to absorb hard-knock life in the city. The ingenious Performance Data Recorder, adopted from the Corvette and part of a $6,195 Track Performance Package, records video laps and in-car audio, overlaying the video with performance metrics: speed, track position, g-forces, etc. Racing software licensed from legendary British motorsports shop Cosworth is then harnessed to analyze and improve your skills. Who needs PlayStation?

All this serves to underline the ATS-V’s remarkable coup, stealing the BMW’s handling crown on its very first try. But as with the standard ATS versus a 3 Series, the ATS-V is too compromised to claim the M3’s all-around title. The Bimmer easily tops the Cadillac in cabin luxury, intuitive controls, rear-seat space and outward visibility. Once you’ve snuggled into the Caddy’s rib-sticking Recaro buckets, caressed the faux-suede steering wheel and toggled that shifter, you’re fresh out of interior talking points. The rest of the cabin has some nerve asking 70 grand, from its Toyota-dull gauges to drab materials and a cramped back seat—a feeling exacerbated by the Caddy’s stingy glass area. And nearly four years on from its introduction, the Cue infotainment system still deserves an Office Space-style beatdown. If only you could rip its infuriating screen from the dash and have at it.

Nor can the ATS-V claim to be a bargain versus the BMW, in the way the larger CTS-V undercuts the M5. The ATS-V sedan starts from $61,640, the coupe from $63,660. Larded with the $6,195 Track package and other options, one ATS-V Coupe we drove checked out at $76,855; adding the automatic trans would have kicked it to $78,855. Those prices are almost smack-dab-even with the BMW and arrivistes like the Lexus RC-F, but they do run a good 11 grand below a Mercedes-Benz C63 AMG.

For Cadillac, once notorious for planet-size cars with moonwalk rides, it is hard to overstate the performance magic it has conjured with cars like the ATS-V. Now, if the brand could just get its design and execution straight, BMW’s kung fu champ could find itself playing disciple in the sport-sedan temple.