The newest heir to Aston's DB tradition slices four cylinders and $18,000...all while keeping up the performance. 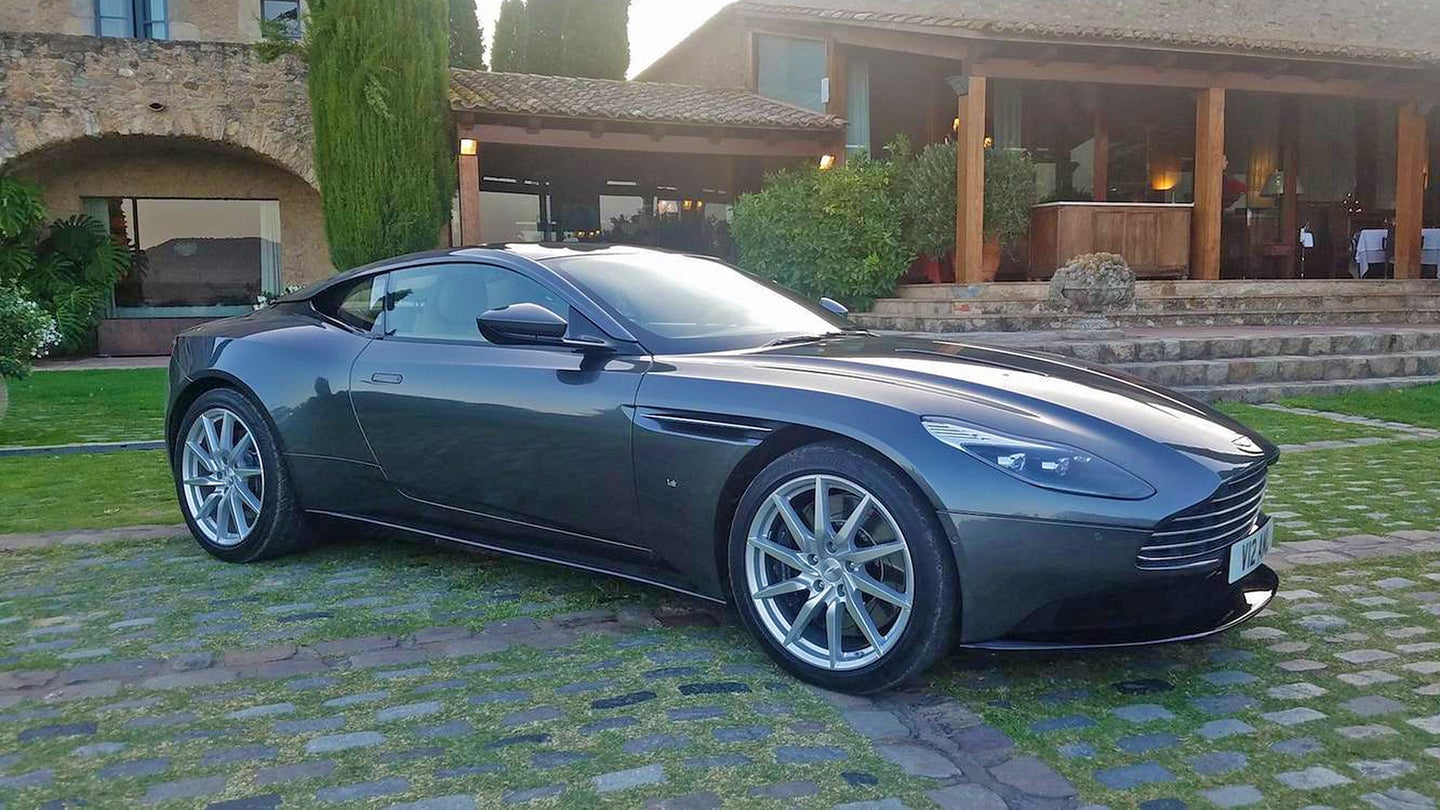 Aston Martin calls itself a “V12 company.” But with Mercedes-Benz now owning a 5-percent stake in the company, the British brand is sampling some German V8 for the first time: The latest DB11 is powered by a 4.0-liter twin-turbo V8 that Benz fans will recognize as the handiwork of AMG.

We took our own quaffs of the 2018 Aston Martin DB11 V8 in Costa Brava, Spain, in this lighter version of Aston’s newly redesigned flagship. Like Bentley before it, Aston is performing a bit of posh GT juggling, with both eight and 12 balls: Affirming the enduring appeal and spinning complexity of its V12s, while simultaneously defining the V8 version as the “driver’s car” of the duo. Andy Palmer, Aston’s chief executive, said the 12-cylinder DB11 is “the intercontinental missile” you’d aim toward the horizon on an all-day jaunt, while the V8 is the car for curves and canyon detours.

With driving impressions under media embargo until Septemper 27, we can’t describe the way the Aston tamed the curves in the Pyrenees in this Mediterranean coastal region. (The mountains themselves were pretty spectacular, for what it's worth.) But we can offer seven opening impressions of the DB11 V8.

1. The Aston looks heavenly from any angle

Aston won’t mind us (we hope) describing what a pleasure it is to stare at a DB11 motoring up ahead, or to see one storming into our rear-view mirror: From its classic, slatted DB grille to its tightly-nipped waist and exploding hips, the Aston is as gorgeous and perfectly proportioned as any modern car. The V8 model gets a blacked-out grille, loses two of the V12’s heat-extracting hood “nostrils,” and adds fashionable dark-smoked headlamp and taillamp lenses, but otherwise, the cars look identical—and identically beautiful.

Starting from $198,995 (before a $2,825 destination charge), the DB11 V8 costs $17,500 less than the V12 model. Matthew Clarke, Aston’s U.S. communications chief, says the V8 may attract a slightly younger, sportier-minded buyer, including people familiar with AMG's engine magic. Buyers in China, Aston’s second-largest market, may focus on a different number, that being 4.0 versus 5.2; The smaller V8 will avoid a crushing displacement tax on the 5.2-liter V12.

“For us, that formula is a bit of a game-changer in China,” Clarke says.

3. …and the performance difference is largely a wash

The twin-turbo V8’s 503 horsepower may be down a bit against the 600 of the bi-turbo V12, but its 513 pound-feet of torque nearly matches the 516 of the 12-cylinder. Now, consider that the V8 and its cooling system weigh 253 fewer pounds than the V12’s setup. Plus that V8 is shoved almost entirely behind the front axle, which shifts the front-to-rear weight balance to 49 percent / 51 percent, versus 51/49 for the V12 model. Stiffened engine mounts, firmed-up steering, and rear suspension changes take further advantage of that optimized weight balance.

The upshot is a 3,880-pound DB11 V8 that scoots to 60 mph in 4.0 seconds, versus 3.9 seconds for the V12. The V12 revs a bit higher—to 7,200 rpm, versus 7,000 for the V8—and may press its horsepower advantage when you accelerate from triple-digit speeds. But in nearly every real-world situation, the V8 should easily hold its own against the bigger engine, with superior agility and fuel economy to boot.

To its credit, Aston has already addressed some griping over the original DB11 interior: Compared with the V12 model, the long, languid throws of the metal paddle shifters have been shortened by 50 percent. Chief designer Marek Reichman pointed to improved harmonization of interior materials, including ditching the odd (and cheap-looking) brightwork on vent controllers that we ourselves called out on the V12 model. Palmer said the changes underline Aston’s agility, its freedom and status as the last fully-independent ultra-luxury brand—unlike Ferrari, Bentley, and other rivals.  But we’re still not in love with the DB11’s generic digital driver’s displays, or the still-awkward integration of Mercedes’ COMAND infotainment system.

It took Mercedes a few years to coax a Rottweiler bark from its once-demure-sounding bi-turbo V8s. But that bloody racket wouldn’t do for a gentlemanly GT: The engine was “Astonized” with a unique air intake and wet-sump lubrication. Aston also teased out more midrange and tenor frequencies from the typically basso profundo V8, with generous fuel overrun through its adaptive exhaust for a just-right amount of backfire and burble.

6. A healthy Aston is a happy Aston…

As Palmer frankly reminded us, Aston Martin has produced just 80,000 cars in 104 years, “and never made any money” doing it. The former Nissan executive has made Aston’s success and solvency his life’s mission, and the results are beginning to show: The opening run of 2,500 DB11 V12s are sold out for 2017. Palmer says that assembly line defects have been halved, showroom transaction prices have soared by 25 percent, and the company’s net profits per vehicle have doubled.

7. …and that means many more Astons to come

Where the purported comeback of Britain’s Lotus beginning in 2009 was smoke and mirrors—a cynical fantasy pushed by the now-disgraced and deposed executive Dany Behar—Aston Martin is poised to deliver on its promise of a greatly expanded lineup. The rollout goes like this: This year brings an all-new Vantage sports car, including an available manual gearbox that defies current transmission trends. Next comes a new Vanquish in 2018, the DBX crossover in 2019, a mid-engine Ferrari 488 rival—also with a stick shift on offer—in 2020, and finally, two over-the-top Lagondas in 2021 and 2022, including an SUV fit for Middle East royals. Low-volume “specials” like the track-spec Valkyrie hypercar are part of the mix, too.

The year 2019 also brings a Rapide E electric sedan, the first full EV from Aston—albeit one that will be limited to just 155 units. Aston is determined to develop in-house EV and hybrid systems, but it won't do a plug-in hybrid; the dual gas and electric propulsion would add too much mass for the sporty brand.

Is that enough Astons for you?