AMG turns the C-Class convertible into a macho ride—and gives drivers the best way to hear the engine's roar. 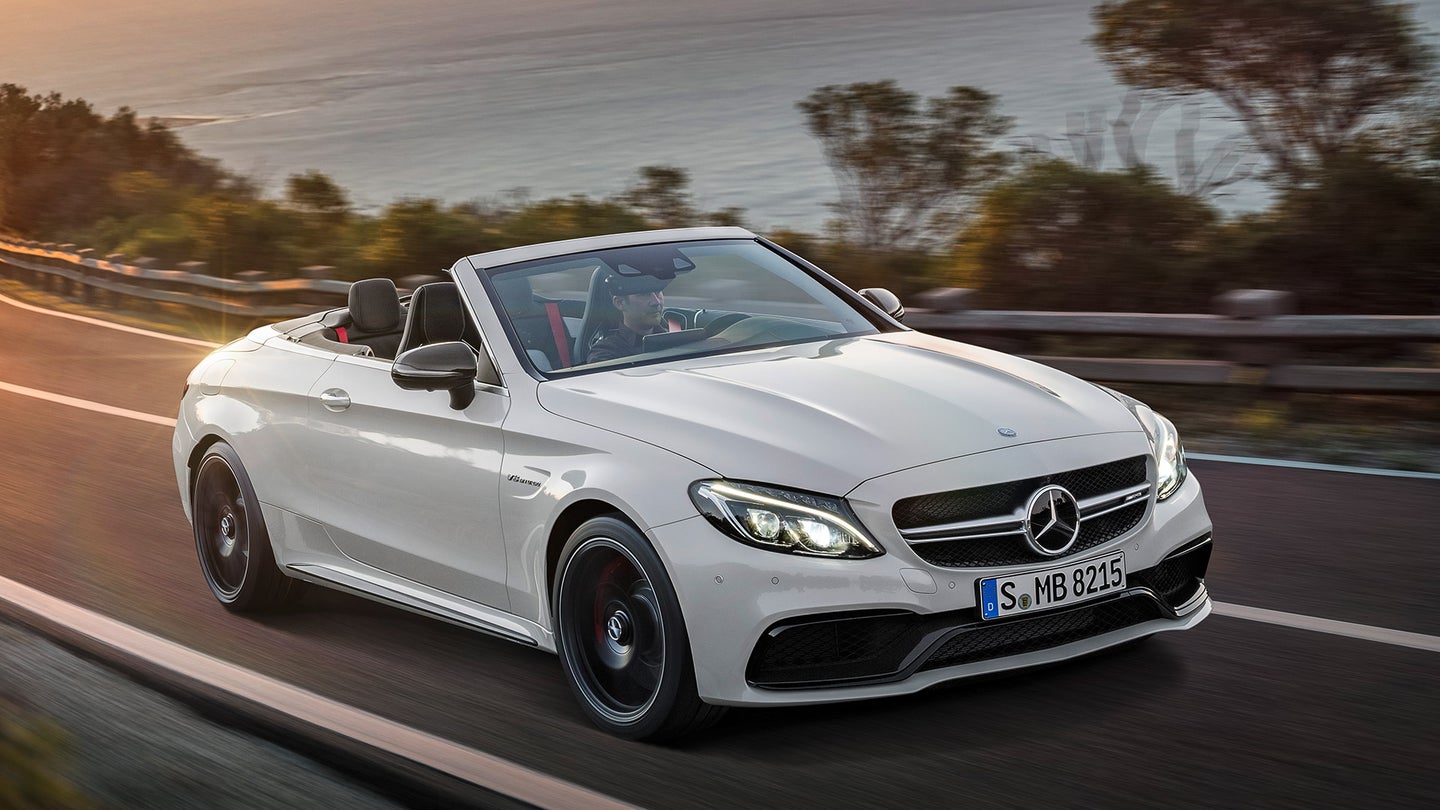 Welcome to Critic's Notebook, a quick and off-the-cuff car review consisting of impressions, jottings, and marginalia regarding whatever The Drive writers happen to be driving. Today's edition: the 2018 Mercedes-AMG C63 S Cabriolet.

Let's face it: The droptop version of the Mercedes-Benz C-Class isn't the most masculine of cars. Brought to market last year as a sort-of-replacement for the deceased CLK, the new C-Class Cabriolet is the sort of car seemingly made for USC sorority queens who excel at guilting their wealthy fathers into buying them toys to make up for all those years of missed birthdays.

That is...until the engineers and designers at AMG lay their hands on it. In their capable mitts, the droptop C-Class is transformed into a rip-roaring plaything that not only overcompensates for any perceived implication of wimpiness—but becomes one of the top picks in the Mercedes-Benz litter.

See, while the idea of going al fresco may seem off-putting to those who see convertible versions of coupes as compromised propositions (due to the added structural mass usually needed to compensate for the roof removal), chopping the top of a C-Class gives its occupants the chance to glory in the visceral pleasures that lie at the heart of the AMG experience. Every blast of acceleration is amplified by the feel of the breeze slapping you in the face. All that missing sheetmetal means you're free to bask in the envy of others driving slower, sadder cars. And of course, opening the roof gives those inside the best way to hear the howling exhaust note that's long been a trademark of cars tuned by Mercedes-Benz's high-performance subsidiary.

For those seeking a (semi) affordable pass into the world of the open-air AMG life, there's the C43 Cabriolet, a 362-horsepower two-door that uses all-wheel-drive to wring the most grip from its twin-snail 3.0-liter V6. But let's face it: You'd really rather have the V8-powered C63. More to the point, what you really want is the version your humble author recently spent a week with: the Mercedes-AMG C63 S Cabriolet, complete with the 503-horsepower version of AMG's handbuilt M178 twin-turbo V8, an electronically-controlled limited-slip differential, and standard 19-inch wheels wrapped in sticky performance tires.

Most C63 S Cabriolet buyers, sad as it is to write, will likely never come close to exploiting this car's full potential. That's true of the C63 coupe and sedan as well, but it's even more true of the droptop version. Granted, there's not a whole lot of hard data to be found on who buys convertible AMGs, but based on anecdotal evidence (i.e. the people we've seen driving around in them) it seems to be comprised of successful, silver-haired professionals and flashy rich youths desperate for attention—two groups that aren't particularly likely to take their cars to the local track day.

And that, simply put, is a goddamn shame. Because even at my car's as-tested price of $100,000 and change—representing an entire Honda Fit worth of options—there aren't many competing vehicles that can match the C63 S Cabrio's blend of straight-line performance, back-road grip, and real-life usability. The BMW M4 Convertible, its closest and most obvious competitor, scores brownie points for offering a manual gearbox—but compared with the AMG, its inline-six seems characterless and its power-folding hard top seems overly cumbersome. A Corvette Z06 may be faster, but a 'Vette is harder to deal with on the rough roads and tight parking spots found in everyday life. (Good luck throwing friends in the back, too.) And a Porsche 911 Carrera GTS Cabriolet or Targa can paint a bigger grin on a driver's face...but at a far bigger hit to his wallet.

So while the C63 S Cabriolet might not be how I'd spend close to six figures on a car—and it's probably not how you would, either—it's every bit worthy of wearing both the three-pointed star and the three-letter badge that's come to signify the fastest Mercedes-Benzes.

And if you do buy one...make sure you drive the wheels off it it every now and again, okay?