Not into cruisers? Indian's smallest, most affordable bike might change your mind. 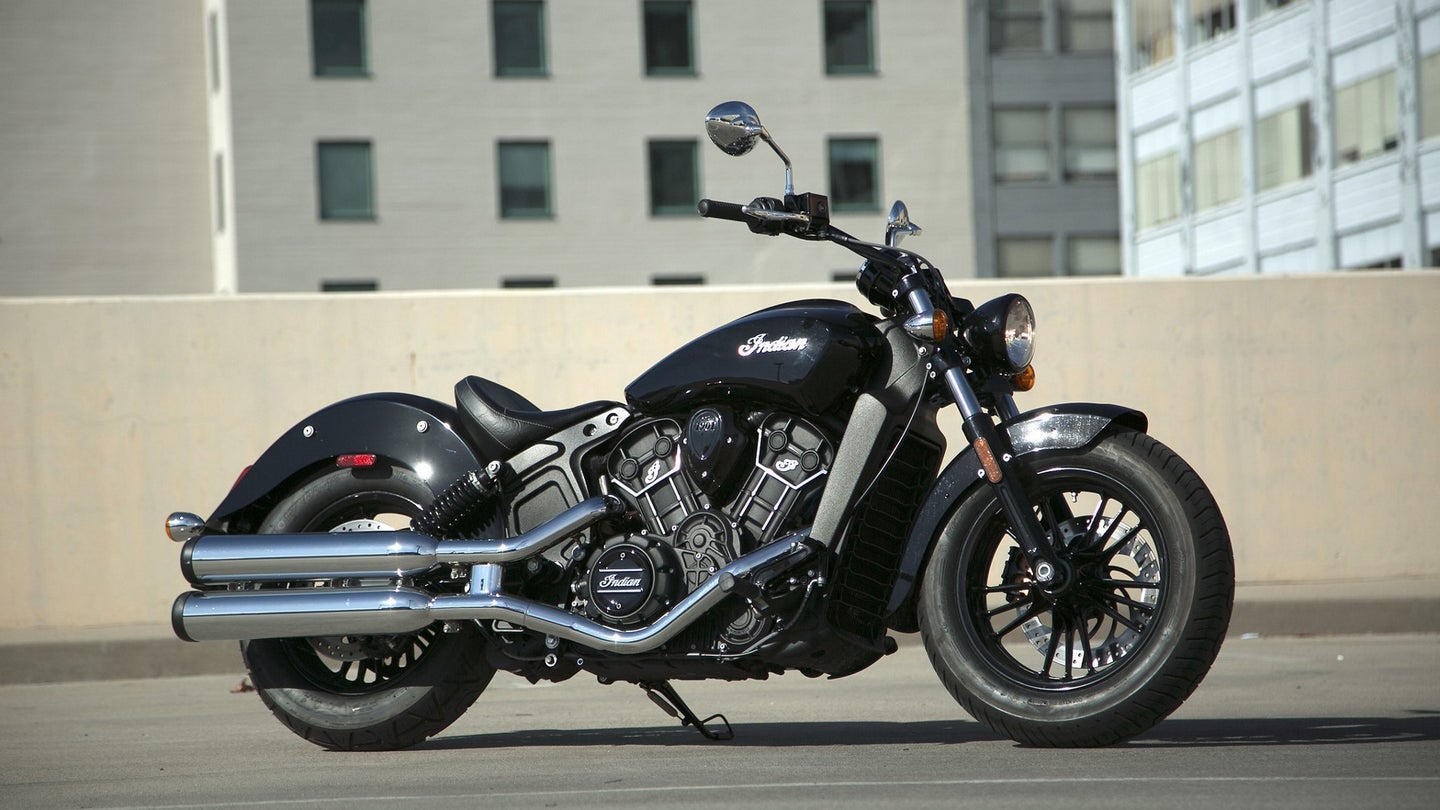 When I heard my local Indian dealer was having a big demo event where you could come ride around on new motorcycles and eat free food, it wasn’t hard for me to decide it was an event I wanted to attend. Since everything in the Indian lineup is bigger than the biggest bike I've ever owned, my first choice for the bike I wanted to try out was the smallest, cheapest Indian motorcycle available, the Scout Sixty.

It wasn't until after I was registered that I actually saw the bike I'd be riding. This one was equipped with what Indian calls “reduced reach” equipment. These ergonomic adjustments optimized the riding position for riders 5' 6" and shorter. I am 6' tall. This was not ideal.

When I took off on the bike and put both feet on the pegs, my knees were higher up than the top of the fuel tank. Instant thigh cramps. After a little wiggling around and scooching my ass as far back on the saddle as possible, I managed to get into a fairly comfortable position.

Despite the awkward ergonomics, this was a very nimble bike. I wouldn't call it flickable, but the handling was quite competent. The lean angle was steep enough to be fun, but you won't be dragging any knees on a Scout Sixty. Beyond that, I can't speak much to the ergonomics since the one I rode was specifically modified for people at least a half-foot shorter than me.

What I can talk about is the fantastic engine. It’s a liquid-cooled 60 cubic-inch V-twin that smoothly delivers 78 horsepower and 65 ft-lbs of torque. The bike had plenty of grunt with a nice, linear torque curve. I experienced the Scout Sixty in a mixed setting of county highways and city streets and it never felt like it didn’t have enough power.

It was easy to shift with a forgiving clutch and the power was manageable enough to just pick a gear and go without the bike getting away from you. In fact, this would be a great bike to learn how to ride on. The engine sounded to me like a Japanese V-twin with American sounding exhaust. It was a pleasant, tasteful, moderate sound that I personally prefer over the characteristic growl of another American cruiser brand that will remain nameless.

Indian did something very clever with the transmission in the Scout Sixty. Unlike the six-speed in the standard Scout, the Scout Sixty has a five-speed. The gear they got rid of was fifth. So the gearbox in the Scout Sixty is the same as the one in the Scout, but without fifth gear. The highest gear on both bikes has the same overall gear ratio. That means you still have the nice, low revs in fifth-gear that you would normally have in sixth-gear. Even in the top fuel-sipping gear, there's still enough there to pass on the highway without having to drop a gear.

Gauges and instrumentation were simple and minimalist like you'd expect on a bike in this class. There's an analog speedometer with a digital tachometer and gear indicator on an LCD display. I wish it was the opposite with an analog tach and a digital speedometer like on my Suzuki SV650. I like being able to see the redline. There's a fuel light in lieu of a gauge, which is fine.

Overall, riding Indian's smallest bike was the most I've ever enjoyed a cruiser. It brings down the barrier of entry into the world of cruisers, especially for a rider like me who is mostly used to Japanese middleweight standard and sport bikes. If abundant storage and a generous passenger seat are priorities, this bike is not for you. But, if you want a modern cruiser that actually handles well and has more power than you'll ever get bored with (on the street, at least), an Indian Scout, Scout Bobber, or the smaller-displacement Scout Sixty will gladly eat up miles or carve up winding roads without breaking the bank or your back.