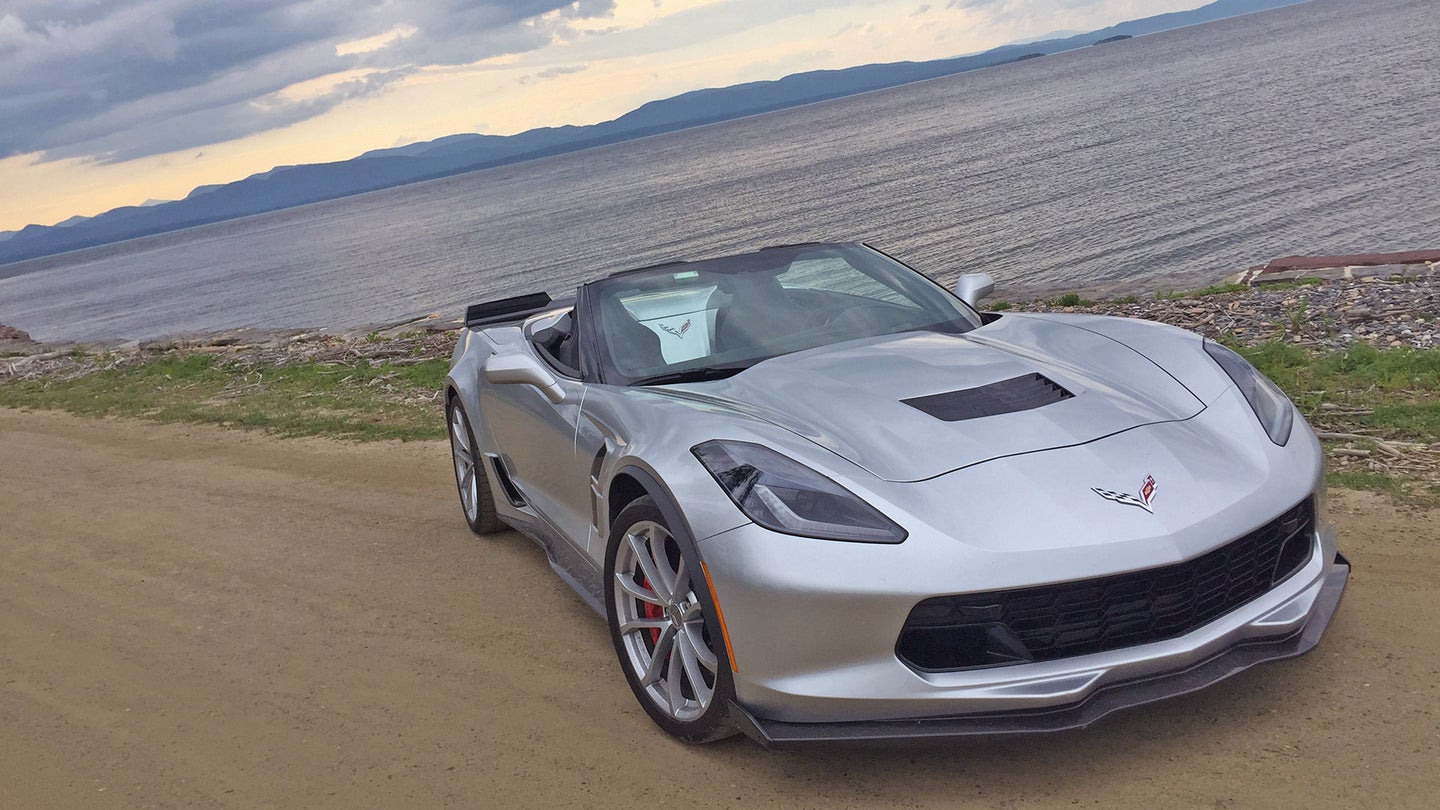 Welcome to Critic's Notebook, a quick and off-the-cuff car review consisting of impressions, jottings, and marginalia regarding whatever The Drive writers happen to be driving. Today's edition: the 2018 Chevrolet Corvette Grand Sport Convertible.

There's a big problem in America today: Not enough people are buying Corvettes.

It's a minor issue, all things considered. But like a coal fire quietly burning away beneath the ground of a small Pennsylvania town, it's a slow-moving menace that could, given time, cause a beloved thing to disappear. If people aren't buying Corvettes, the Corvette itself could be in danger. We already know that General Motors is planning an all-new, mid-engined 'Vette for the car's eighth generation, presumably so it can better battle the supercars of the world; while the company hasn't stated how much the mid-engined Corvette will sell for, it's hard to imagine that GM will drop, rather than significantly raise, the price for such a revolutionary product. (Indeed, The Drive's own Lawrence Ulrich has stated his opposition to the project for just such financial reasons.)

It's especially vexing considering how remarkable a sports car The Plastic Fantastic has become—a combination of performance, style, and comfort that can seem like a bargain. (Emphasis on can; more on that later.) And the Grand Sport, introduced last year, is the Goldilocks' Choice of the three-car 'Vette family: it wears the same wide body and aerodynamic alterations as the Z06 but keeps the naturally-aspirated, 460-horsepower 6.2-liter LT1 V8 instead of the supercharged LT4 version found in the mack-daddy Corvette.

Of course, while car nerds will geek out over details like 1.1-plus Gs of lateral grip and adaptive magnetorhelogical suspension dampers, the average Corvette buyer is likely more concerned with looking cool on the drive to an Eagles concert. As such, my press car was configured more along the lines of a Woodward Dream Cruise special than a weekend autocross star: in automatic transmission, convertible-topped form, loaded up with appearance options like carbon fiber ground effects and microsuede-coated A-pillars.

As it turns out, though, even saddled with that less-than-ideal spec sheet, the Corvette Grand Sport is every bit the sports car it ought to be.

If there was one problem with the particular Corvette I spent the weekend with, however, it was this: This sucker was expensive. My droptop Grand Sport test car bore an MSRP of $94,050 on its window sticker—a full $37,560 more than an entry-level Corvette Stingray, which packs the same smallblock engine and goes just as fast in a straight line. More to the point, it's roughly $25K more than a basic Grand Sport convertible.

In an odd way, this silver Corvette serves as a lesson in just how little you really need to spend on a 'Vette in order to have one hell of a car. With the exception of the carbon-ceramic brakes, every option slapped on this tester added exactly zip to the car's performance—and while those giant heatproof stoppers are impressive, the regular brakes work well enough that only hardcore track rats need even think about dropping the cash on the ceramics. Besides, you'd be better off buying the Z07 package, which includes the carbon-ceramic brakes as well as other competition-minded bits, like hardcore aerodynamic add-ons and a more aggressive suspension, yet costs almost the same as the brakes do alone.

But you don't need to, and that's the point. Even in regular form, the Grand Sport is the sort of sports car that reminds you just what a great automaker can do when it sets its mind to it. It's capable of whipping cars that cost three times as much on a race track but is be equally at home on a 3,000-mile cross-country road trip. It's a wonder.

Now, if you'll excuse me, I'm off to figure out the quickest way to earn 75 grand.

Number of times you'll regret opting for the Visible Carbon Fiber Ground Effects Package because it scrapes on the ground or you step on the fragile door sills: At least once per day