Can't stand SUV's in any shape or form? Try Audi's mashup of a sedan, coupe and hatchback. 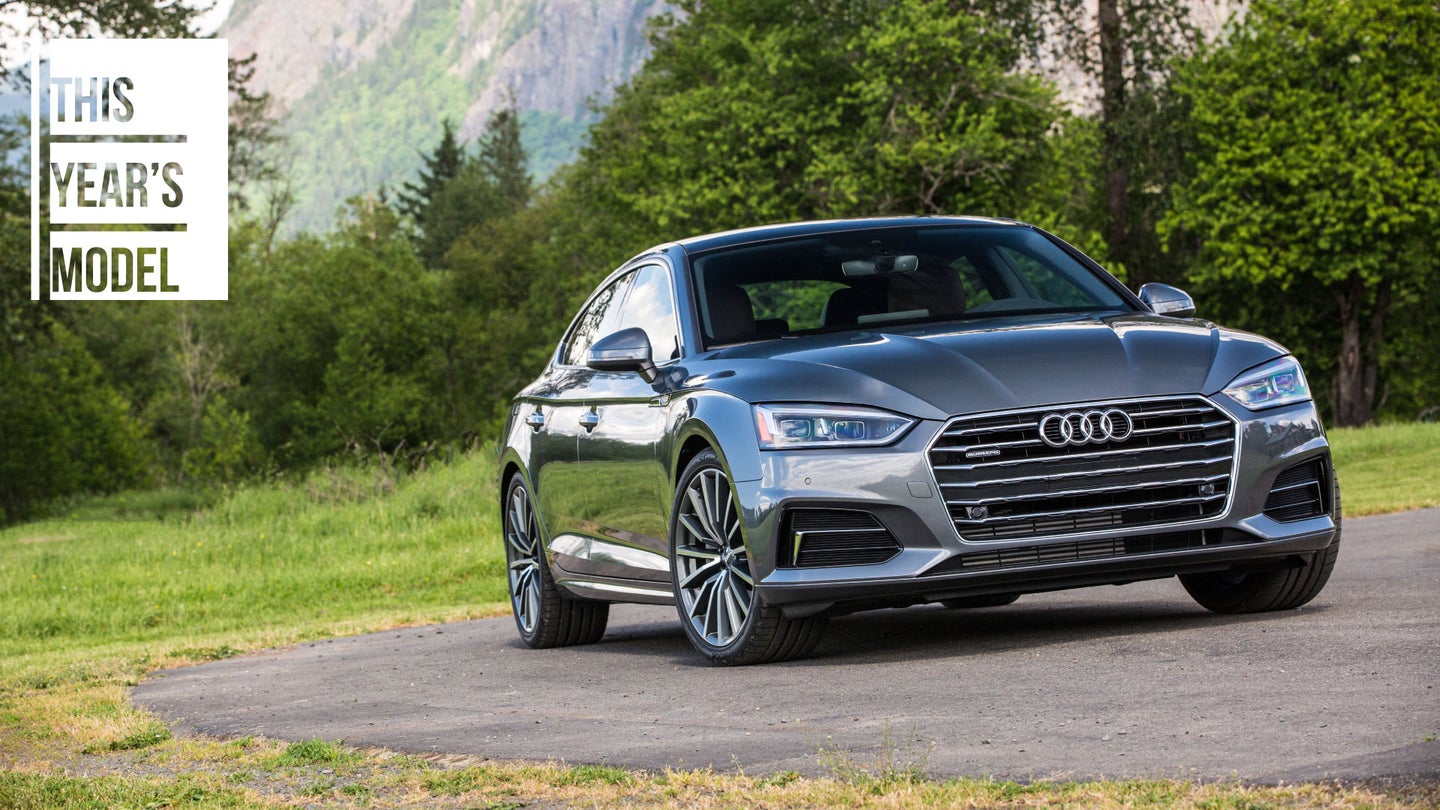 We know that Americans are utterly unimpressed by station wagons. Now, four-doors are apparently total bores as well: Sales of traditional sedans are dwindling. Ah, but there will always be holdouts, people determined to flee from SUVs that have choked the American landscape like creeping ivy. So automakers continue to tinker with new body styles—something, anything that will get buyers excited about a car that’s not an SUV.

For Audi, one answer is the 2018 A5 Sportback and its pumped-up offshoot, the S5 Sportback. It’s a smaller, more-affordable take on Audi’s successful A7, a car that melds the curling roofline of a coupe, the four portals of a sedan, and an ingeniously disguised hatch. As in the A7, that hatch, by hinging far forward in the roof, creates an expansive opening and cargo space that traditional sedans can’t touch. Europeans have enjoyed the Sportback’s practical virtues since 2007; now, Audi has begun shipping this all-new 2018 Sportback to America as part of its latest product onslaught.

The Audi should find plenty of friends in the tech-trendy, Amazon-dominated boomtown of Seattle. My test drive began from the sleek Thompson Hotel, where the sight of S5 Sportbacks at the curb, fresh off the import boat, was as bracing as a shot of the local espresso. Audi—not wanting to tease and then disappoint a bunch of car journalists—hadn’t revealed that the S5 version had made it to Seattle until the night before our drive.

Knowing what The Drive’s enthusiast readers care about, I shamelessly requisitioned a 354-horsepower S5, a car that really pops in Tango Red metallic paint. More red flash, in the form of painted brake calipers, is a dead giveaway for the $2,500 Sport package, a must-have for those enthusiasts. Its stiffened, adjustable adaptive suspension (versus a standard mechanical setup) is twinned with a fast-acting electronic rear differential that can shuttle nearly 100 percent of torque between the aft wheels.

If the name sounds suspiciously impractical thanks to the “A5” prefix that also describes Audi’s luxury coupe, know that the Sportback is actually based on the roomier A4 sedan. The A4, A5 Coupe, and the Sportbacks are actually identical triplets from the front roof pillars forward. That includes Audi’s lovely, complexly wrought aluminum hood—a one-piece clamshell that drapes over wheels with no visible seams—and widened single-frame grille. But the Sportback rides the sedan’s 111.2-inch wheelbase, versus 108.8 inches for the A5 coupe, and every scrap of that 2.4-inch stretch is bequeathed to rear passengers. So where the roof’s stylish downslope does force you to limbo a bit to reach the back seat, there’s decent space once you’re settled in. Its 35.1 inches of rear legroom, just shy of a Mazda3 sedan, compares to a scrawny 32.7 for the A5 Coupe. There’s nearly four inches more rear shoulder space than an A5 Coupe, and 0.9 inches more rear headroom.

It’s a cliché, but pictures don’t always do justice to the Sportback’s looks. The car won’t blow people away like the trés fashionable A7. That A7 has a stretched-cat silhouette and a beautifully symmetrical roofline that virtually melts into the rear decklid lip. The Sportback is nearly 11 inches shorter, which doesn’t help matters, and its hatch is more attenuated, less smoothly integrated. For the latest A5 Coupe and Sportback, one critical objection is the new character line that charts a rather woozy, sine-wave course along the body sides. Where Audis typically draw their visual strength from clean, unadorned surfaces and microscopic attention to detail, the styling fillip is the kind of lipstick that recalls brands like Infiniti.

Yet the Sportback remains quite handsome in that ever-demure, bourgeois Audi fashion. This pseudo-sedan looks planted, Germanic and expensive. Frameless doors mimic those of the coupe, and clear room for the sexier, faster-sloping roofline. A broad rear deck houses wraparound taillamps with frosty-red LED turn signals that fire in striping, sequential fashion. Quibbles aside, the Sportback will snare more eyeballs than a standard-issue A4 sedan, just as an A7 out-styles an A6. And it makes BMW’s philosophically similar 3 Series and 5 Series GT models look even more forlorn and misbegotten, if that was even possible.

With rear seats raised, the hatch accepts 21.8 cubic feet of cargo. That may not impress a VW Golf buyer, whose hatch is a touch larger. But it’s still roomier than the trunk in any Rolls-Royce, Cadillac, Lexus or other land-yacht-sedan on the market, a group led by the Lincoln MKS at 19 cubic feet. Folding the rear seats opens up 35 cubes of cargo space—again, no big deal for a hatchback nerd, but roughly double the space of a typical large sedan with a fixed back seat.

Now, if you love the idea of a tasteful, all-wheel-drive family car that can storm to 60 mph in a remarkable 4.5 seconds, you’ll want to spring for the S5 version. That is, if you don’t mind springing for a car that starts from $55,375 and nicked $68,350 with a boatload of options, including Audi’s near-peerless Virtual Cockpit driver’s display. Sporty bits included gorgeous sport seats with integrated headrests and Audi's familiar diamond-stitched Nappa leather.

Remember a time when Audis cost less than BMWs, and BMWs cost less than Mercedes-Benzes? Sure, Audis were mostly tarted-up Volkswagens back then, but the old “Audi discount” is as long-gone as an Audi 5000. A Mercedes-AMG C43, perhaps the world’s most purely luxurious compact sedan, with 362 horsepower from a biturbo V6, starts from $52,995—$2,400 less than the S5 Sportback. In the Sportback’s defense, both A5 and S5 versions are reasonably equipped even at their base price. The S5 is actually a touch quicker than the C43 AMG, with 354 horsepower and 369 pound-feet of torque from its own 3.0-liter, single twin-scroll turbo V6.

So equipped, the S5 dashed like an agile lumberjack through the forests near Snoqualmie, Washington, the real-life backdrop to the Twin Peaks television series. True to David Lynch and Audi S-model style, the S5 makes for a somewhat surreal experience. Pilot and passengers are largely insulated—a bit like Laura Dern’s perfect innocent in Blue Velvet—from the murderous Frank Booth forces raging outside. The car is a torque monster, yet creamily sprung and near-silent inside. Steering is deadly accurate but only intermittently involving. A two-stage sport exhaust manages a mildly sinful growl in its Sport setting, but the punctilious handling is strictly Sunday-go-to-meeting. An eight-speed ZF Tiptronic automatic transmission (versus the seven-speed, dual-clutch S Tronic in the A5 version) spreads more butter over the proceedings, even with shortened ratios in its lower gears for zestier acceleration. After much effort, I finally hammered and wrenched the Audi hard enough to elicit a backwoods squeal from its optional 19-inch tires. Trust me, it's not easy.

It’s all very reminiscent of Mercedes’ wide-ranging AMG 43 lineup: The S5 Sportback puts up lightning numbers, the kind once associated with high-end sports cars, including a limited 155-mph top speed. But the numbers don’t line up with the tranquil state of your mind—not least when you’re lulled by massaging seats clad in diamond-stitched Nappa leather, or a Bang & Olufsen 3D sound system with 19 speakers and 755 watts. You want unmanaged anger? You’ll need next year's RS 5 Coupe, with a 450-horsepower slap in the kisser from a 2.9-liter, twin-turbo V6.

A5 Sportback plenty fast, deluxe for most buyers

If these prices sound dear for any A4-based car, know that the A5 Sportback, starting from $43,575, will satisfy the vast majority of Sportback buyers. That one manages a 0-60 mph run in a fully respectable 5.7 seconds, with 252 horsepower and 273 pound-feet of torque from Audi’s ubiquitous 2.0-liter, direct-injected turbo four. If the S5 is a smooth-rushing torrent, the A5 Sportback is more a trickling backyard fountain in terms of excitement. Yet the starter Sportback is a thoroughly capable luxury car, essentially an A4 2.0T with a tighter back seat but more luggage space. That capability includes first-rate mileage for such a fleet machine, at 24/34 mpg in city and highway.

In basic trim, the A5 interior can seem a bit wan, crying out to a cheapskate shopper for luxury upgrades. To cut to the chase, a $7,800 Prestige package adds more than a dozen features, from the Virtual Cockpit and head-up display to Google Earth-based navigation with a (surprisingly useful) handwriting pad atop the MMI console control knob. A wing-shaped dashboard comes correct with aluminum, walnut or gray oak inlays, and carbon fiber for the S5. All pumped up with options, this A5 and S5 free you to admire Audi's usual design chops, the top materials and fit-and-finish that are easy to take for granted—until you hop into, say, a Cadillac or Infiniti and see where other brands are still playing interior catch-up.

The brand’s latest, optional driver assistance features include Vehicle Exit Assist. Its long-range radar—in contrast with typical shorter-range units—scans up to 70 yards behind the Audi, and stays on for two minutes after you shut off the engine to keep you from dooring a bicyclist or getting creamed by a fast-approaching car. Or, these days, a fast-approaching SUV.

Like every automaker from lowborn to British royalty, Audi is cranking out new SUVs, but still looking to please the holdouts. That includes drivers who understand—deep in their bones, as keepers of the flame—that no SUV can handle as well as a lighter, lower-riding, more aerodynamic car, all things being roughly equal in engineering terms. On that score, the all-new 2018 Audi SQ5 is one hell of a modern SUV, performing in a way that no one could have imagined 20 years ago. But the S5 Sportback, with the identical engine and quattro AWD, will still kick its ass when the chips are down and the curves come up.

Scott Keogh, Audi of America president, believes that the Sportbacks will “wake up a flattening segment.” That may be optimistic. But capital-C Car Lovers may find the Sportback a welcome wake-up call, an antidote to the neighbors’ knee-jerk SUVs.