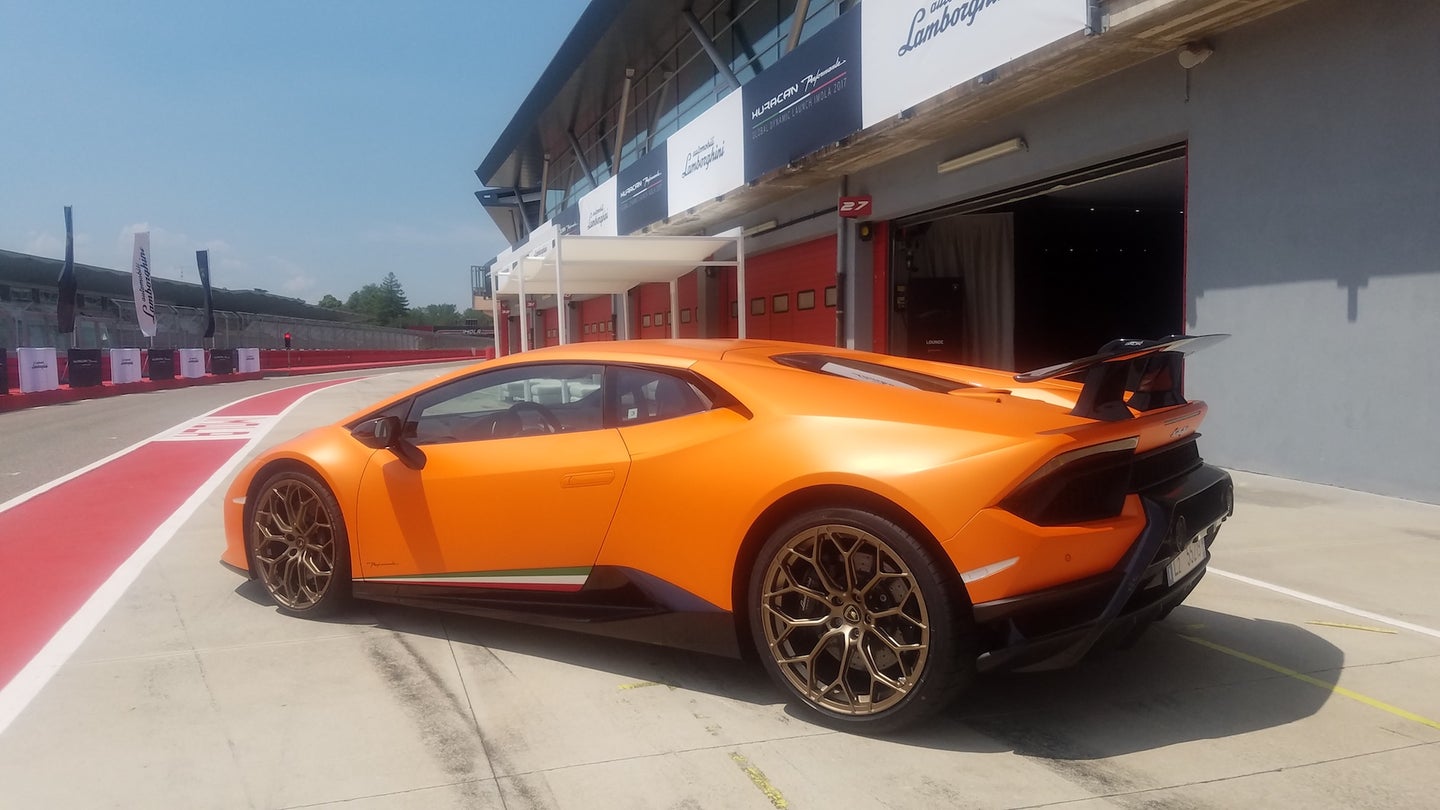 If you’re a supercar fan—or better, an owner—there’s never been a better time to be alive. Case in point, the Lamborghini Huracan Performante. An Italian company whose cars were fleet and flashy on the street, but utterly fallible on track, is suddenly producing one of the fastest production cars to ever carve an apex. That includes a wholly unexpected, record-smashing 6:52.01 lap time on the Nürburgring’s Nordschleife circuit, topping even the Porsche 918 Spyder. (Yeah, I know all about China’s electric Nio EP9, and its own technically impressive ‘Ring run. And in another piece, I’ll outline multiple reasons why the Nio can't be considered a true production car, e.g. one that people can buy, license and drive on the street—whether legally or practically—in most major markets).

Tiresome 'Ring arguments aside, I just put the Huracan Performante through its hardcore paces on another world-famous track: Imola, the former Formula One circuit near Lamborghini’s home turf and factory in Sant’Agata Bolognese. In a word: Wow. Here are my Seven First Impressions of a supercar that’s designed to impress in every imaginable way.

With 631 horsepower and 443 pound-feet of torque from its 5.2-liter V-10, the Performante is faster than Anthony Weiner’s texting thumbs: 2.9 seconds from 0-62 mph (100 kph), 8.9 seconds to 124 mph (200 kph), with a V-max of 202 mph. Compared with a standard Huracan, the Performante’s steering, suspension, brakes, tires and transmission are all beefed up, even as the car sheds 50 pounds of fat. And where Lamborghini’s Quattro-based AWD system used to be a recipe for terminal understeer, the Performante’s retuned AWD system maximizes traction but never seems to get in the driver’s way.

2. The Borgia clan once ruled in Bologna

And if Cesare Borgia could drive a supercar, he’d definitely choose this local Italian assassin, which balances seduction, calcuation and menace like few other cars. And you gotta love the saucy Italian flag painted along the rocker panels, a patriotic touch.

3. If supercars could compete on The Voice, it would win in a landslide

Howling around Imola, the Lamborghini’ au naturel, titanium-valved V-10 and low-backpressure exhaust system produce a battle cry that no turbocharged rival can match: Not the six-cylinder Ford GT or Porsche 911 Turbo, not the V8 Ferrari 488 GTB or McLaren 720S.

4. It’s got the latest in miracle fiber

The Lamborghinis’ “forged composite” is unique in the industry, a form of carbon fiber that’s chopped and stuffed into a resin-matrix mold, allowing complex shapes that would be virtually impossible with traditional woven fiber. The composite is key to the ALA system (for Aerodinamica Lamborghini Attiva). The bravura active aerodynamic system includes hollow pillars for the massive rear wing: Speed-activated actuators let air flow through the pillars and out through the wing as needed, creating up to 750 pound of downforce for incredible stability under braking – and the ability to pin individual wheels to the pavement for “aero vectoring” that helps pivot  the car through corners.

5. Orange you glad you chose that paint

I've raved about how the standard Huracan looks beautiful in white. But the Performante’s matte orange paint (officially “Arancia Borealis”) is clearly its signature shade, judging from the way Lamborghini keeps putting it on a pedestal in videos, at auto shows and here at the car's global launch.

6. It actually justifies the lofty price

A standard Huracan is priced from aroud $242,000. The Performante starts at $274,390. Considering its amazing leap in performance, the Performante’s $32,000 premium seems eminently fair by supercar standards.

7. The ride is surprisingly decent

Some track specials seem designed to schedule you for a premature kidney replacement. But the Lamborghini’s magnetic suspension, toggled into its street-going "Strada" mode, didn’t beat me up on dusty, ruined pavement in the rustic countryside of Emilia-Romagna.