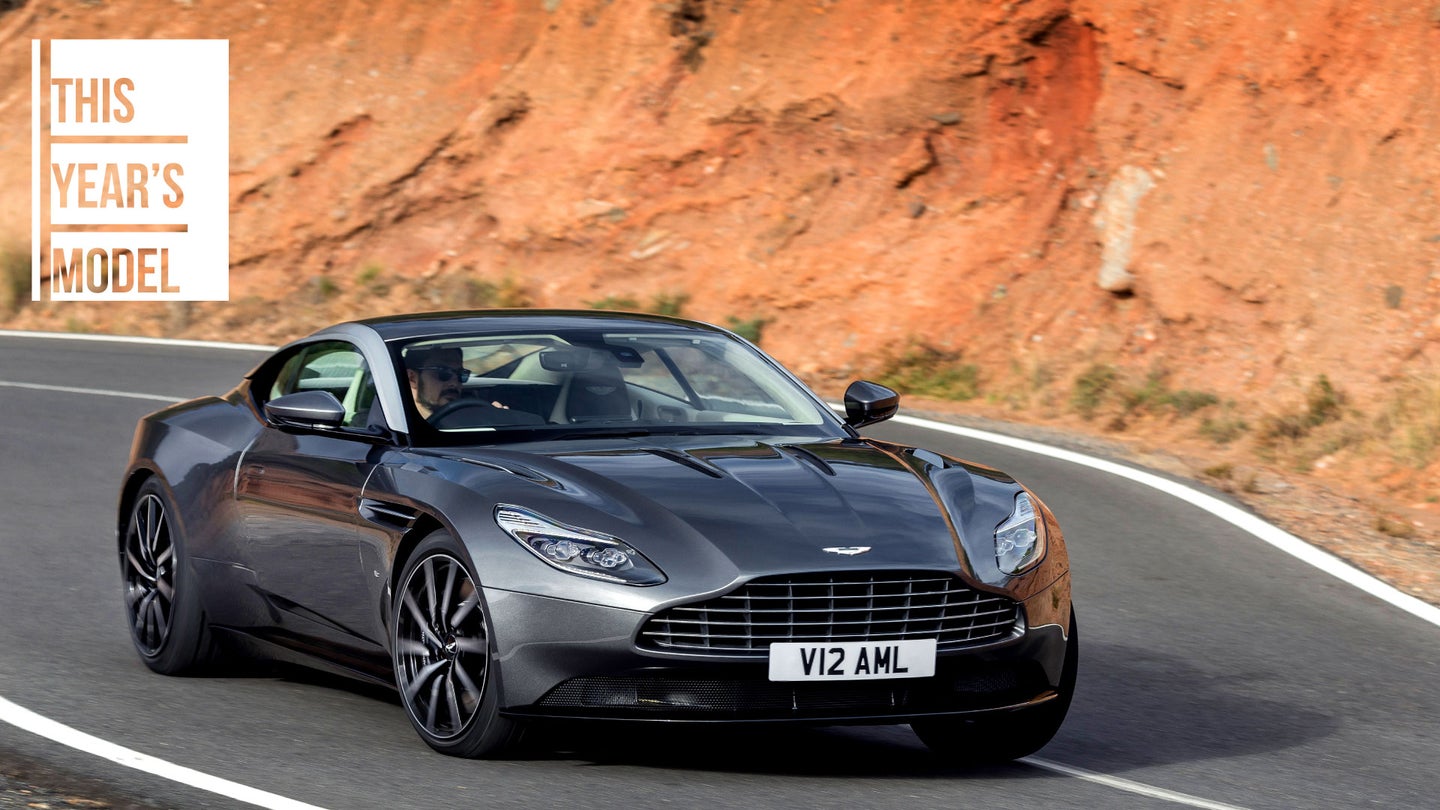 The cars and motorcycles have bloomed on this warm Sunday in Harriman State Park, in the way that spring brings girls in their summer dresses to Central Park. Two daredevils take turns launching a Ducati Monster and Kawasaki Ninja along glittering Lake Tiorati. There’s a father and son in a newer Porsche 911; a group of young men flogging an E46 BMW M3; a Subaru WRX STI and a tuned, well-kept Nissan 240SX from the late Nineties.

Me? This old thing? Oh, it’s just a 2017 Aston Martin DB11, the son and heir of Britain’s oft-endangered, increasingly quaint GT tradition. And, judging by the way everyone from leathered bikers to tuner dudes gather to genuflect before the Aston Martin, the DB11 is today the unquestioned lord of this 46,000-acre public estate.

I’m the Aston's chauffeur, so naturally I pop the interior latches—operated by a retro pull cord on either side of the dash—and lift the front-hinged clamshell hood. Crowd, on cue: Aaaah. Even the youngest car fans coo over the V12 on display beneath an X-shaped aluminum brace. Its raised block script offers a clue to its own threatened existence: V12 5.2 TWIN TURBO. The hood itself is a lovely, rippled affair that drapes atop the wheels with no seams (or “shutlines”), thanks to one of the largest one-piece aluminum stampings in the industry. A pair of electronic closers simultaneously inches both corners shut when I ease it down, to avoid owners accidentally bending it.

In an era where affordable four-cylinder cars top 300 horsepower, and a Ford Ecoboost V6 offers 647 horses, no one really needs a massive, mechanically complex, resource-hogging V12. But some people, bless them, want one anyway. Because there’s nothing like a V12, whether for its sound, effortless torque or pure status.

I wouldn’t call these engines a Dirty Dozen, but governments and regulators increasingly see inefficient V12’s as outlaws. Looking to squeeze out a little more life, Aston has squeezed its V12 from 5.9 liters to the aforementioned 5.2, while adding a pair of turbochargers. Thus is the downsized V12 literally boosted to a burly 600 horsepower. (The Aston Vanquish soldiers on with the larger V12 for now). It still sounds glorious, an Elgar march of cylinders and camshafts that crescendos with a haughty roar at 7,000 rpm.

For all Aston’s current fealty to the twelve-cylinder, it’s worth remembering that its most-classic GT’s were powered by inline sixes for decades. That includes the 2.6-liter six in the first official DB model (using the initials of founder David Brown), the DB2 that saw 410 copies built from 1950 to 1953. http://www.astonmartin.com/en/heritage/past-models No Aston was ever powered by a V12 until the Vanquish of 2001, when the company was a vassal of Sir William Ford of Dearborn: Two common Ford Duratec V6’s were married, or joined at the hip, in a Ford engine plant in Germany, producing a 5.9-liter of royal bearing and power.

The new downsized V12 ups the game of the DB11, the first all-new DB model in 15 years. Under the tutelage of straight-talking CEO Andy Palmer, Aston is preparing an onslaught of models to cement its relevance in a brutally competitive ultra-luxury field. If all goes well, we’ll see an all-new Vantage sports car, a Vanquish, a Lagonda sedan, a Wales-built SUV and a mid-engine follow-up to the insane AM-RB 001 hypercar.

The DB11 underlines Aston’s bid to nurture its heritage – “For the Love of Beautiful Cars” is its motto – without getting stuck in the past, as Jaguar did until pulling out of its styling tailspin. Interestingly, it was design chief Ian Callum who reversed Jaguar’s long period of stasis, after holding the same position at Aston Martin and creating the famed DB7 of 1994.

Now it’s Marek Reichman’s turn to shake things up as Aston’s current design director. His DB11 punts Aston’s styling forward in fairly aggressive fashion. Go ahead, quibble over some busier details, such as the “roof strake” that sunders the classic rear roof pillar. It houses a pair of functional “Aeroblade” ducts that – akin to the Ferrari 488’s blown spoiler -- shape air and funnel it through a demure opening at the rear to create downforce with no need of a gauche wing. But however you slice the details, the DB11 still stuns onlookers like a mallet to the skull. A beautiful, all-aluminum mallet.

It’s amazing how many auto journalists, as giddy as a Tiger Beat tween over the sight and sniff of rock-star leather and wood, will totally overlook anything wrong with a car interior. I’ve read a handful of reviews of the DB11, and most don’t raise a peep about some questionable choices in displays, trim plastics and control strategies.

Gorgeous Aston interior a given, but quibbles remain

First, the optional Bang & Olufsen audio system is, as the British say, shite. Vent switches are insubstantial, faux-metal thimbles. The DB11 is also the first Aston to adopt Mercedes electronics, with the German automaker trading technology in return for a five-percent stake in the company. Now, Benz’ Comand system is worlds better than the ancient, Volvo-based controls that date to Ford’s ownership of Aston and Volvo. But the Comand knob and dash-mounted screen feel awkwardly integrated. Worse, the center stack’s flush-mounted, haptic touch controls bring unpleasant associations with Cadillacs, Chevy Volts and Honda Civics. They require a kind of dainty, alligator-armed operation to get your fingers on them. Those knob-free controls require too much eyes-off-the-road, and often require repeated jabs before they respond. Plop a single beverage in a (too-shallow) holder, and you’re virtually cup-blocked from reaching the controls at all.

Aston Martins, of course, have been famed for their gorgeous, analog chronograph-style gauges, including a tachometer that sweeps counter-clockwise, the opposite of every other car. Now, I understand the impulse toward modernity, the unstoppable march toward digital displays. But the Aston’s new 12-inch TFT screen is a wan replacement. The display’s limp graphics and fonts reminding me of nothing so much as a Lincoln, or your mom's Lexus. If James Bond took one look at this generic display, he’d defect to the Russians. Taken together, the interior compromises are troubling for a car that started from $214,840 and sneaked past $254,000 with options.

Admittedly, great beauty makes up for a lot of flaws. And issues aside, this Aston’s interior hits every emotional button. The steering wheel, with its oval shape, is a tactile delight. Handcrafted marquetry, here in Satin Tan Lace Wood, had me gliding fingers over its fine-grained surface again and again. Tan “Sahara” leather was too baby-food beige for my taste, but this being an Aston, any color in the spectrum is yours for the asking. Brogue detailing, at $2,270, seems a gotta-have option: It covered the doors, motorized center armrest and even the headliner in tooled Bridge of Weir leather that recalled a hand-cobbled Crockett & Jones shoe from Northhampton. Giving my own shoe to the Aston, the critical needle swung wildly to the positive. Driving the DB11, with its indomitable power and spirit, made me feel like Pip in “Great Expectations,” a ragamuffin suddenly graced with good looks and fortune. Even the unobtainable Estella couldn’t resist a ride in this DB.

The Aston will still squat and even wiggles under hard acceleration, and you need to dial up Track mode to sideline the intrusive stability system and get the most out of the car. But compared to the old DB9, the DB11 is decisively more agile. The riveted, adhesive-bonded aluminum structure is stiffer. Adjustable Bilstein dampers virtually eliminate the DB9’s tendency to wallow at higher speeds, yet ride quality remains plush. (The steering wheel houses smartly separate controls for the suspension and powertrain, letting me, say, keep the ride in Comfort but that mighty powertrain in Sport Plus).

Dialed to 11, new DB is Aston's best-performing GT yet

With a curb weight topping 4,100 pounds, the Aston isn’t a pure sports car. But CEO Palmer aptly describes the Aston  as splitting the difference between more-aggro Ferraris and Lamborghinis and beefier, 2.5-ton cruisers from Bentley and Rolls-Royce. That includes the Aston’s 3.8-second blast to 60 mph, and a quarter-mile in a thrilling 11.9 seconds, just 0.1 seconds behind a Corvette Grand Sport.

Rocking the hilly twisties near Harriman, the Aston set an eye-opening pace, in a car that generates .98 g’s of lateral grip through lovely 20-inch wheels and Bridgestone tires. A limited slip rear differential and brake-based torque vectoring helped the Aston scoot from wooded corners.

V12 can rock all 600 horsepower, or take a breather

Black metal paddle shifters for the eight-speed automatic transmission operate with a too-long throw, rather than an efficient “snick,” but they’re still workable. The V12 can shut off half its cylinders to save fuel, alternating the idling of both banks to keep catalytic converters warm and doing their emissions duty. There’s no display telltale, so I never once sensed whether the Aston was running with six cylinders tied behind its back.

The only aural bummer is a strange little turbo whine, mostly limited to the heights of second gear, that our Brett Berk described as the sound of a yipping Corgi. Brakes, including six-piston front calipers, work fine at speed. But they’re an annoyance in stop-and-go urban traffic, with a vague and non-linear pedal that suddenly transitions from too little braking to too much, the Aston stopping short before your intended target.

Turned loose on sweeping highways, the Aston finds its true element. The V12 trumpets its charge, the car follows, flaunting its genetic superiority all the way back to Harriman. I jump out and grab my backpack to take a quick hike on the Appalachian Trail that winds through the park. Taking a last glance over my shoulder, I realize I could just walk laps around the Aston Martin and have as much pleasure.