2017 Nissan Rogue Sport Is the Little Crossover That Could

General competency is the name of the game for Nissan's new smallest CUV. 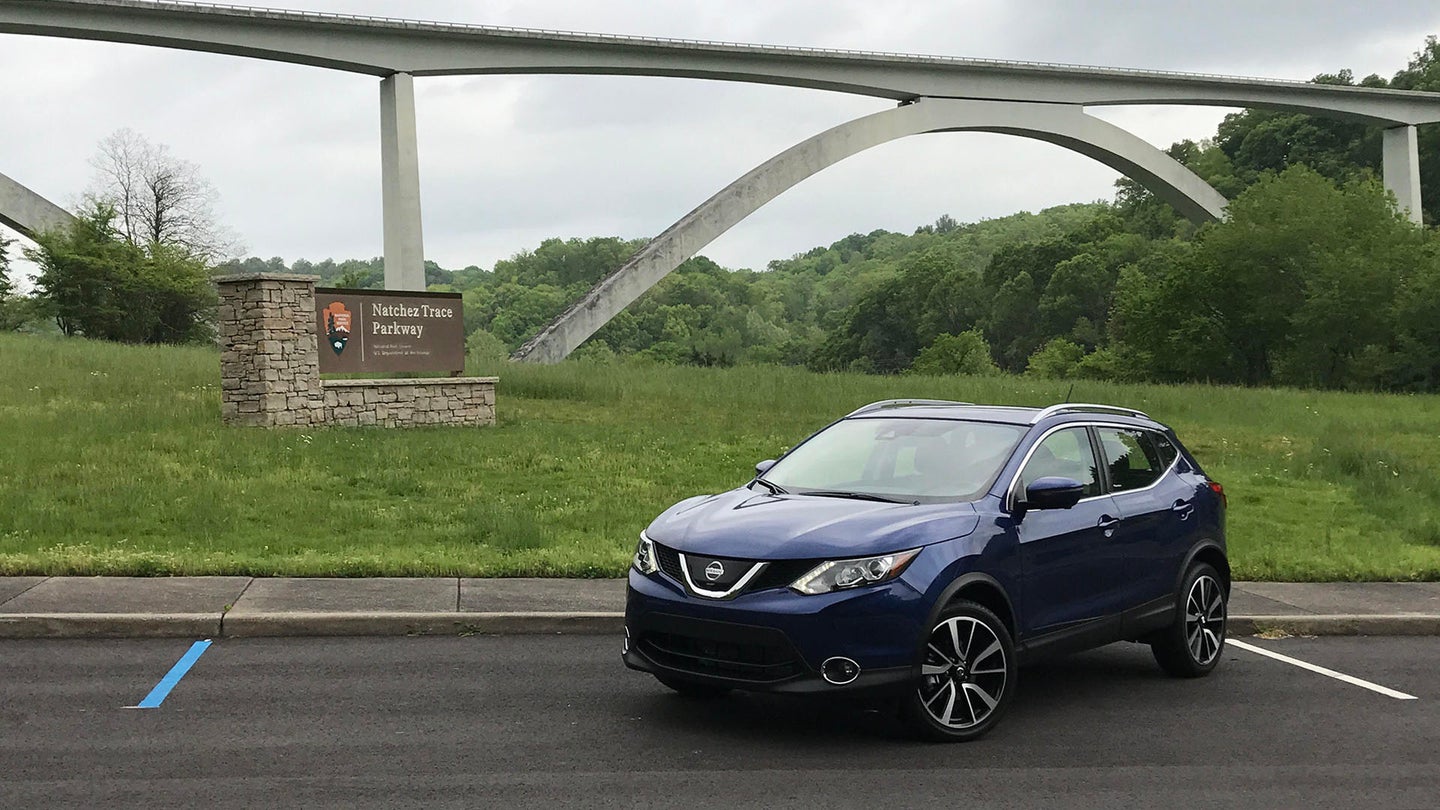 When parents decide they want a second child, the first usually has no say in the matter, even if they're old enough to talk—or in this case, able to talk at all. Fortunately, the Nissan Rogue is an inanimate machine, so it has no way of understanding that mom and dad just brought home a new baby named Rogue Sport.

The crossover boom is in full swing these days, and the Nissan Rogue has been one of the biggest beneficiaries. Sales have skyrocketed since last year's redesign, and along the way, it dethroned the Altima as the brand's number-one seller and became the best-selling non-pickup truck passenger vehicle in the country. So when Nissan wanted to add a subcompact crossover to the family and bring its global Qashqai (pronounced Cash-Kai) model to our shores, it knew we Americans need u's after our q's and decided to borrow a name from its biggest model.

So the question is: Could the Rogue Sport spark a family feud by stealing the spotlight from its segment-leading big sibling?

That all depends how many people fall asleep at night thinking, I wish I had a Rogue, but smaller, because that's basically the overall look. The Rogue Sport wears a familiar expression of Nissan’s “emotional geometry” design language—the swooping front end and U-shaped grill accent, the pronounced rise at the back of the belt line, and a few purposeful creases along the sides all recall the larger Rogue. But it's shorter by about a foot in length and lower by six inches in height, with a steeply-raked rear window giving off a hatch-on-stilts vibe. Overall, I think it's a pretty handsome little crossover, if conservatively styled when compared to competitors like the Honda HR-V and the Toyota C-HR.

Nissan is upfront about marketing it towards a younger, childless crowd—I heard the word "millennial" more times than I care to in a given day at the test drive in Nashville—and that's good, because most of the shrinkage came at the expense of rear seat legroom and cargo space. Still, it's the largest entry so far into the subcompact crossover market, and Nissan hopes the restrained design and slightly more forgiving dimensions will keep those young buyers happy with the Rogue Sport even as they age.

Moving inside, it only took me two seconds in the front to confirm that yes, a Rogue by any other name is still a Rogue. Nissan was able to port over the steering wheel, dashboard, infotaiment unit, and interior panels from the larger model thanks to a similar overall width, making the Rogue Sport feel a bit like an alternate reality Rogue from the driver's seat—very familiar, but slightly off from what you remember. Hopping back and forth between them, one thing that stands out: The Rogue Sport lacks the comfortable padded leather seats found in upper trims of its larger sibling. Still, the buckets in my top-of-the-line SL model were perfectly acceptable for a three-hour tour around Nashville. (A three hour tour...)

Outward visibility is great, thanks to a high seating position and relatively thin A-pillars, but the upswept beltline and lower roof combine to create a sizable blind spot in the back. Good thing the Rogue Sport comes with available blind spot and lane departure warnings as part of Nissan’s “Safety Shield” technology suite—though I found the lane departure to be hit-or-miss when dealing with a highway’s dotted lines during my drive.

Another issue: The repackaged infotainment unit is showing its age, lacking compatibility with both Android Auto and Apple CarPlay. And most maddeningly, there’s only one USB port in the whole car—an odd design decision for a car that’s supposed to be targeted towards younger, tech-savvy people (I'm not saying the M-word again). It feels like a missed opportunity for Nissan to build something more based around smartphone integration (and possibly cut the price even more).

So does the Rogue Sport live up to its last name on the road? As much as anything in its class can—it’s still a crossover. But the Rogue Sport does manage the trick of driving more like a small car than the regular Rogue, with minimal body roll in the corners and a well-planted feel on the straights.

But it's not quick. It’s powered by a 2.0-liter inline four-cylinder engine putting out 141 horsepower and 147 pound-feet of torque—less than the Rogue on all counts—and Nissan’s Xtronic CVT transmission doesn’t help matters much. Acceleration is ponderous at best, even with it doing its best impression of a traditional automatic by "shifting" under a heavy right foot. There is a "manual" setting I tried out on some of the steeper hills around Nashville, but a middling response time means it’s not really something you’d want to play with on the regular.

The light steering made the Rogue Sport easy to maneuver through downtown Nashville; however, it offered almost no feedback on the country roads outside of town. When I said as much while driving the thing, a Nissan employee in the back seat reminded me the steering has "Regular" and "Sport" modes and promised to switch it to Sport at the next stop. When we pulled out again, after five minutes I asked her if she had really done it because I thought she had forgotten. She hadn't—it was indeed in Sport mode—but that's just how little a difference it makes.

Still, razor-edged handling isn’t exactly the point of a car like the Rogue Sport. It excels at offering a comfortable, well-balanced ride with minimal road, wind, and CVT noise; it’s not designed to overload the senses. I didn’t get a chance to really test the all wheel drive system, but the crossover does feature an “AWD Lock” button that buyers in cold-weather climates will likely appreciate, and a torque split display screen in the gauge cluster.

When it comes to the driving experience, probably the biggest negative for potential buyers will be the Sport's slightly worse fuel economy compared to the regular Rogue. Nissan claims it’s because the weight savings weren’t enough to offset the Rogue Sport’s smaller engine, but I'm not sure consumers will buy that logic—especially should gas prices rise in the near future.

Nissan Hopes You'll Come on Down Because the Price Is Right

As Nissan prepares the first shipment to dealers this month, one of the Rogue Sport’s strengths is its pricing and feature list. The base S model with FWD starts at just over $22,000 including destination, and though that’s a few grand more than competitors like the Honda HR-V, Mazda CX-3, and Jeep Renegade, the Rogue Sport feels a bit more composed than others in its class. I was impressed at how solid everything felt, from the weight of the doors to the fit-and-finish on the interior. It's better-executed than I would expect for a CUV in the low $20K range.

It's once you start moving up the ladder and throwing in options that the math gets a little fuzzy. Fully spec'd out with all the bells and whistles, including push-button and remote start, heated leather seats and steering wheel, dual-zone climate control, power moonroof, touchscreen navigation, and 19-inch wheels, my tester cost $31,365. That's about the same price as the starting point for the top trim level on the Rogue, which comes with many of the same features standard. So which way will buyers break?

Nissan is gunning for the well-rounded middle ground of general competency that proved so fertile for the original Rogue, and it would appear they've mostly pulled it off with the Rogue Sport, save for the dated infotainment setup and underpowered engine. But as for my original question...honestly, with its class-exclusive third row seating and larger cargo area there to impress consumers who probably don't need either, the Rogue will live on just fine.

No, what I'm concerned about is the humble Nissan Juke. This could be its death knell, at least in America. If the Rogue Sport takes off like gangbusters, Nissan could very well decide the Juke's outlandish styling and low sales numbers aren't worth the expense of shipping it over anymore. Case in point: The Nissan folks left it off a slide listing their entire SUV/CUV lineup in a pre-drive presentation and called it a "niche" vehicle. A second generation has been promised, but if the more mature Rogue Sport takes up all the oxygen in the tiny SUV room, Nissan may have to kick the Juke to the curb.