Faraday Future released a video of its FF 91 electric car driving on public roads. But the company's health is still very much in doubt. 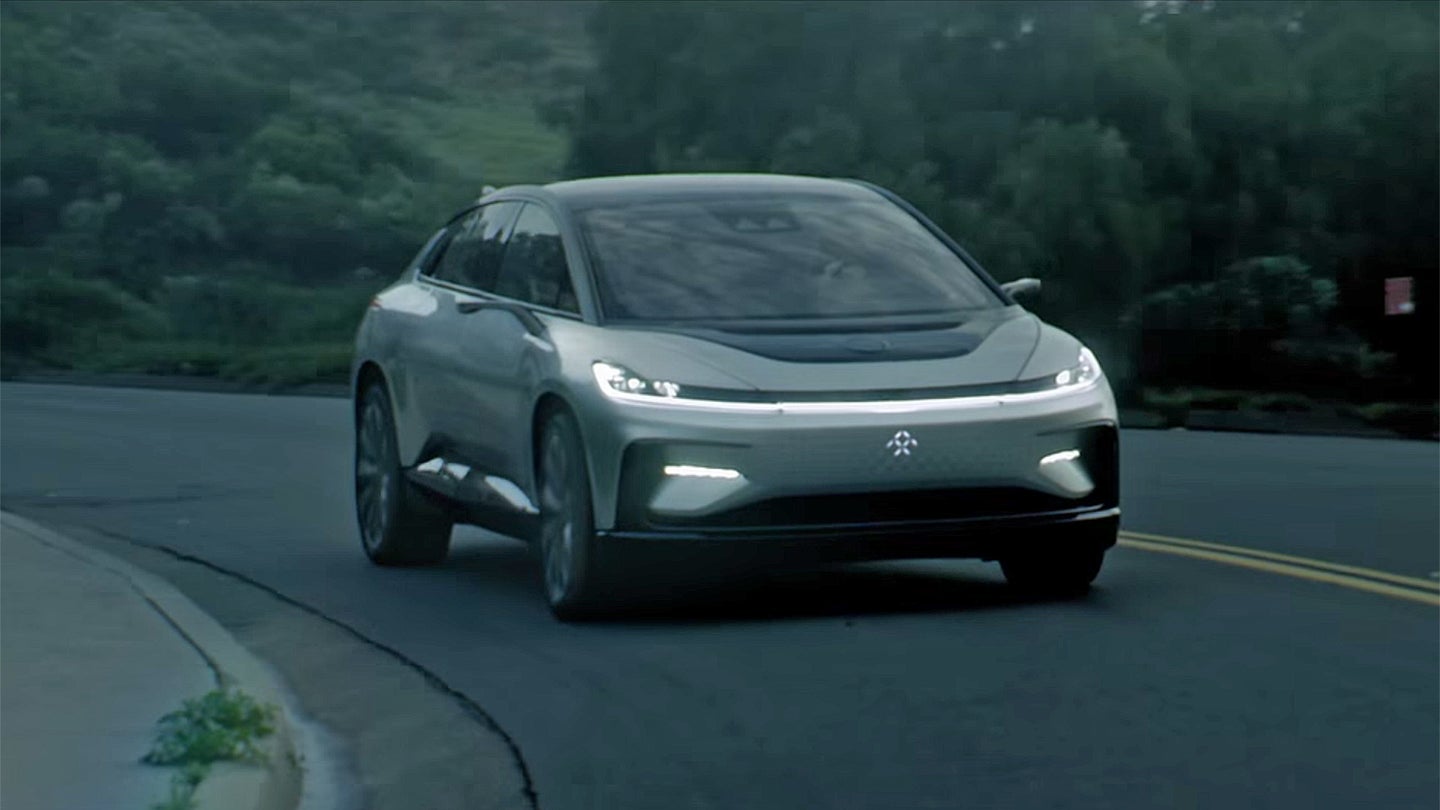 Faraday Future, the Chinese-backed California electric-car startup, is rather like a submarine when it comes to news—only rarely surfacing with details about its planned FF 91 luxury electric car. The last time Faraday emerged from the depths, though, it appeared to have sprung a leak. The company unveiled the FF 91 at CES back in January amid reports that it was struggling to pay for construction of its factory, located not far from the CES show floor in North Las Vegas, Nevada. Little has been heard from Faraday since...but the automaker just released a video of the FF 91 cruising around on public roads.

While it's hard to tell from the languid pace of the car in this video, the FF 91 should be able to blow many other cars into the weeds if its announced specs hold up. At CES, Faraday said it would do 0 to 60 mph in 2.39 seconds, thanks to 1,050 horsepower. It also claimed a maximum range of 378 miles, courtesy of a 130-kilowatt-hour lithium-ion battery pack. Faraday also plans to integrate autonomous-driving capabilities.

That all sounds pretty impressive, but it won't matter if Faraday can't get the FF 91 into production. The company broke ground on its Nevada factory just over a year ago, but little actual work has been done at the site. Construction work halted last fall amid a dispute between Faraday and its lead contractor over payments.

In February, Faraday announced declared in a press release that it would not scale back the Nevada factory, which it has promised to spend $1 billion on, and that it was opening up bidding for the next phase of construction. Faraday initially plans to build a facility just large enough to get FF 91 production going, and then expand to 3 million square feet. Faraday won't discuss a firm timeline for completion, but it previously said it wanted to get the FF 91 into production by next year. Given the amount of work to be done on the factory, that seems unlikely.

Even if Faraday can get it into production, the FF 91 may have a hard time standing out. A high-performance, long-range, potentially-autonomous electric car seems like a remarkable thing, but remember that Tesla already offers similar products in the form of the Model S and Model X. Another startup, Lucid Motors, plans to launch its 1,000-hp autonomous-capable Air sedan in 2019. Several established luxury automakers, including Audi, Mercedes-Benz, Jaguar, and Porsche, are planning new electric cars of their own.

With no factory to speak of, it's unclear when the FF 91 will start production. But the longer Faraday waits, the less chance it will have of being a trendsetter. Faraday has put a lot of emphasis on that (the word "future" is in its name, after all), so it's hard to say what the company will do if the FF 91 arrives late to the party.